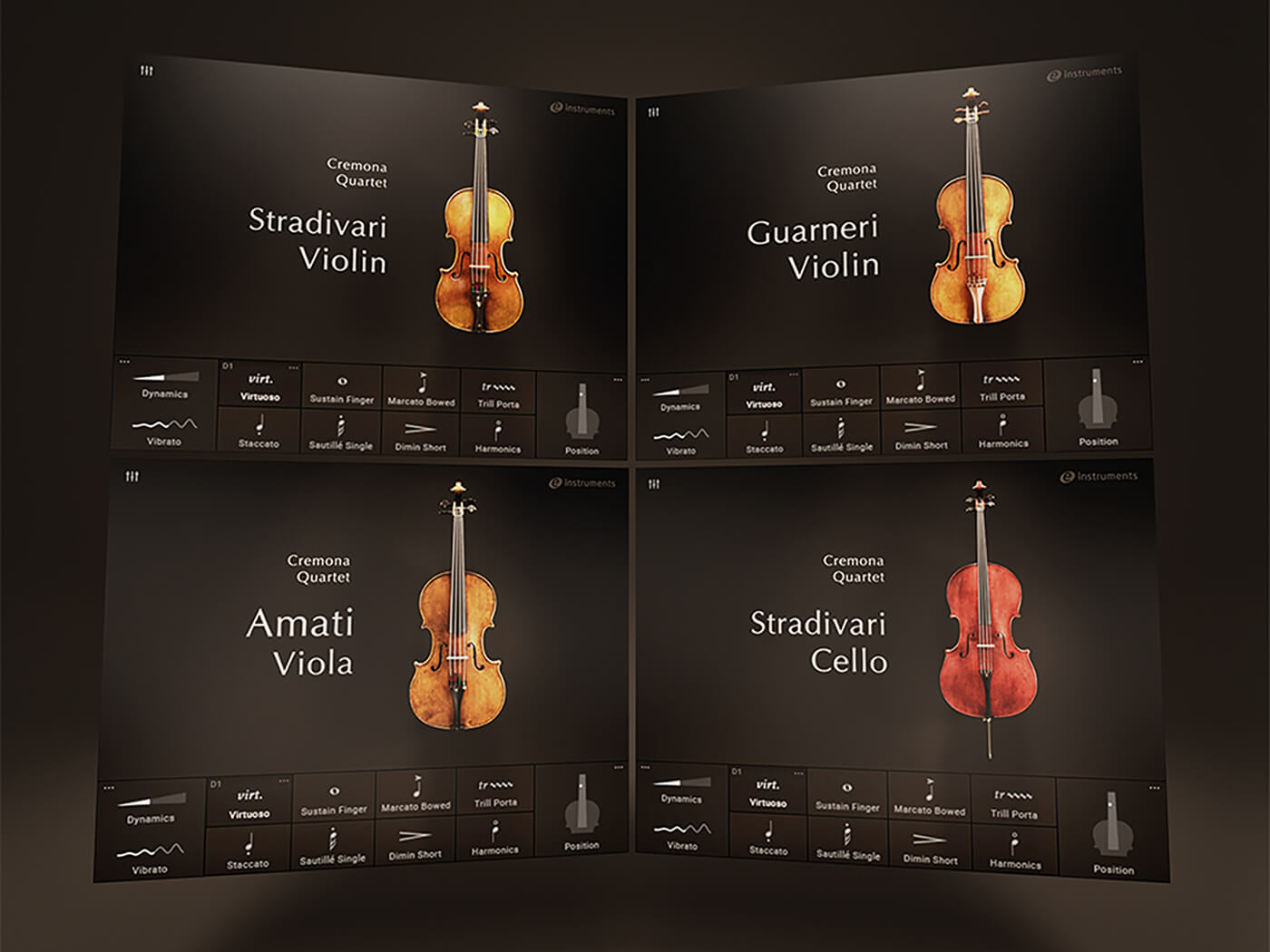 Antonio Stradivari may be the most famous name to come out of the lutherie industry that centred on 16th Century Cremona, Italy, but is perhaps not the most important. For that accolade, most experts would point to Andrea Amati, who is widely credited as having created the first instruments of the violin family that take the form that we still use today. Whether or not this design was entirely down to Amati, what is without doubt is that Cremona’s most famous luthiers learned their craft from Amati, his sons or, as is the case with Stradivari himself, his grandson Nicolò Amati. The instruments these luthiers produced were of such exquisite quality that surviving examples are revered as being the absolute best that money can buy… if you have enough of it, that is, because these rarities change hands for millions.

Recently, we looked at a new sample library from Native Instruments and e-instruments, Stradivari Violin, that uses one such instrument as its source, namely Stradivari’s ‘Vesuvius’. That instrument is part of the collection at the Museo del Violino in Cremona, who collaborated with NI and e-instruments with the aim of digitally preserving the unique character and history of the Vesuvius, and making it available to a wide audience of musicians and producers. As it turns out, Stradivari Violin was just the initial fruit of that collaboration, and it has now been joined by a full quartet of second violin, viola and cello, all of which have been sampled from priceless instruments in the museum’s collection. 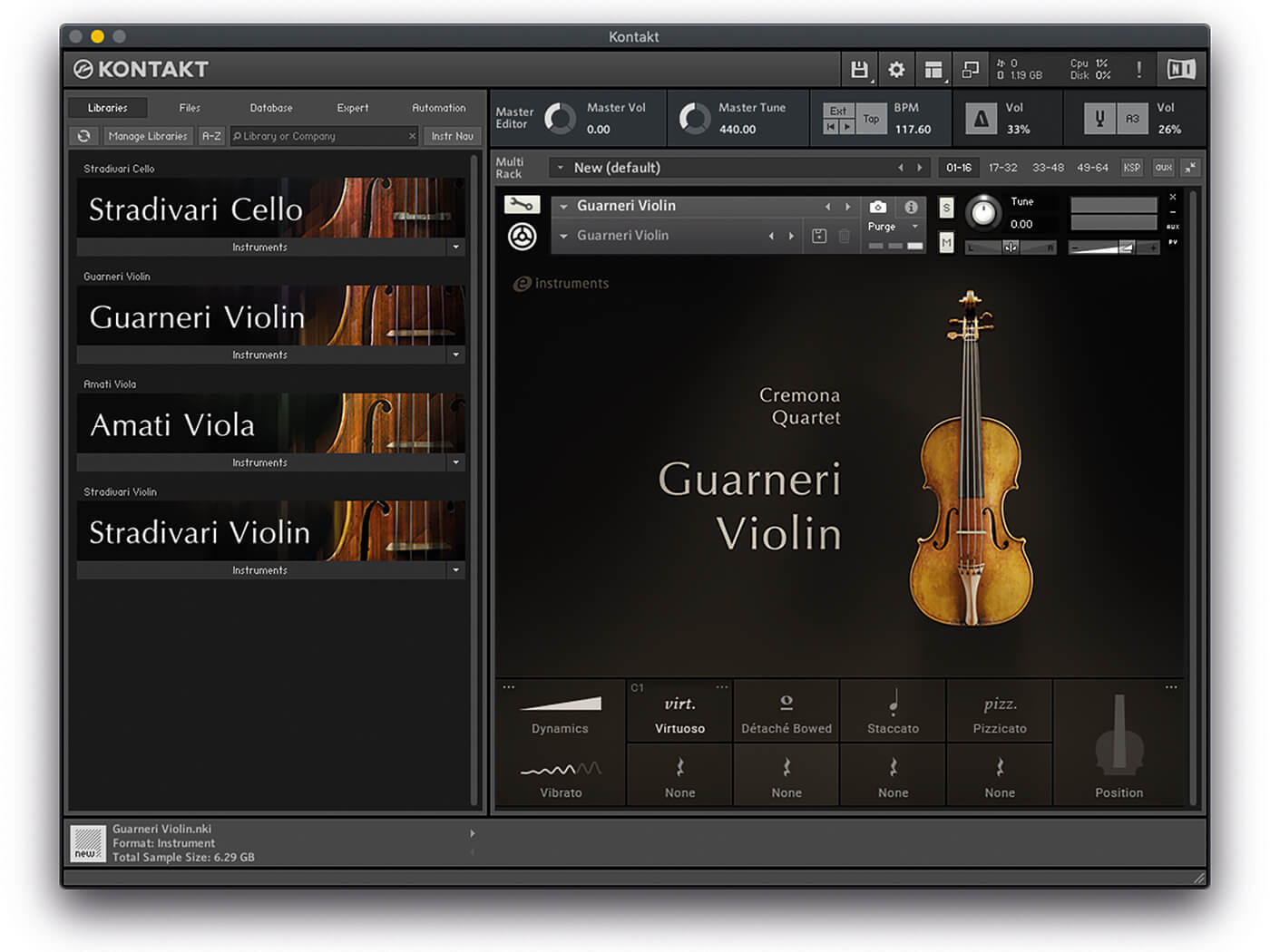 Cremona Quartet’s second violin, Guarneri Violin, has been sampled from the ‘Prince Doria’ instrument that was created by Giuseppe Guarneri in 1734. Although Guarneri’s grandfather, Andrea Guarneri, was an apprentice of Nicolò Amati, Giuseppe developed his own unique style for his instruments. Both he and his instruments are often referred to as ‘Del Gesù’ (which means “of Jesus”) because of the Christian symbols he incorporated into his labels. Many of the world’s finest violinists and composers consider Del Gesù instruments to be superior to those of Stradivari, and with fewer than 200 still in existence they are considerably rarer as well. The tone of Guarneri Violin differs noticeably from Stradivari Violin: where the latter has a sweet, almost light, tone, the former sounds richer and more sonorous.

Also rich and sonorous is Amati Viola. This library was sampled from the oldest instrument used in Cremona Quartet, the ‘Stauffer’ viola, which was created in 1614 by Gerolamo Amati, and crafted in the same tradition as established by his father, Andrea Amati. The elegant sound of Amati Viola has just the right amount of presence to ensure it holds its own when playing with the rest of the quartet.

The last member of the quartet has been sampled from another of Stradivari’s creations, this time his ‘Stauffer’ cello, built in 1700 and listed as an Italian national treasure. Stradivari Cello’s deep, clear, resonant sound is so startlingly good you can almost smell the wood polish and bow rosin, and it serves to provide a perfectly balanced grounding when played alongside the other instruments in the quartet. 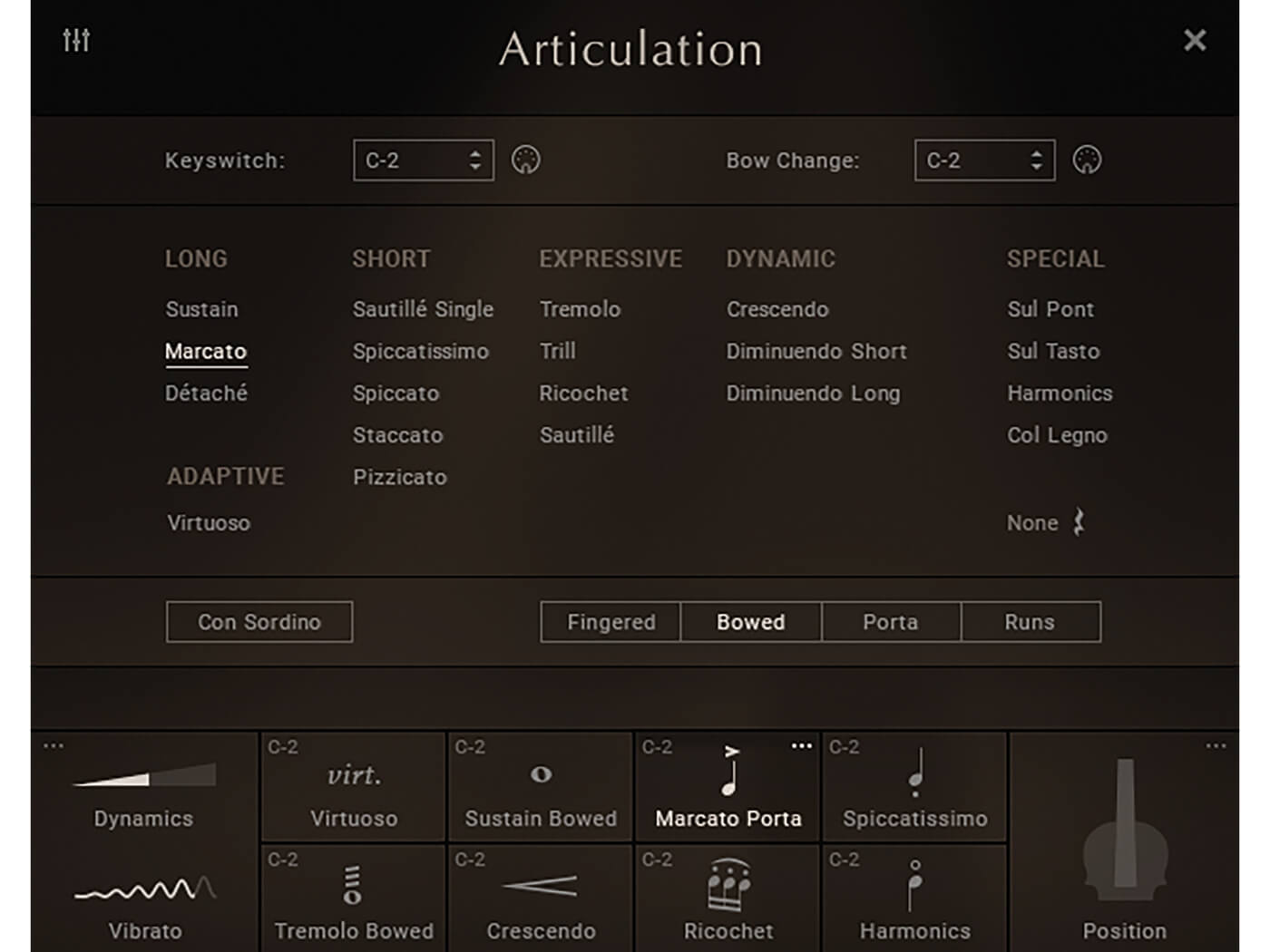 …and one for all

As well as the age, quality and rarity of the source instruments, the libraries that make up Cremona Quartet have a lot of other things in common. All of the instruments were played by master musicians and recorded in the Auditorium Giovanni Arvedi at the Museo del Violino using an array of 32 microphones placed in different locations within the auditorium. Many articulations of each note were recorded, encompassing the many different bowing, striking and plucking techniques employed by string players. These have been painstakingly edited, and have even been phase-matched so that changing between articulations always sounds natural.

Notes and articulations are grouped by the playing technique they use – détaché, marcato, staccato, tremolo, and so-on – with the same selection of techniques available across all instruments in the quartet. The sample engine provides eight slots into which these different articulations can be loaded, from where you can switch the active slot either by clicking in the interface or by pressing the corresponding trigger note on your keyboard. When assigning an articulation group to a slot you can dial-in additional performance variations too, such as whether the notes should be continually bowed, rebowed or fingered, whether to use portamento, the speed of a trill, and so-on.

The samples for any articulations that you assign to a slot are loaded immediately so that switching between slots gives natural and seamless results, even if doing so mid-passage. With the right articulations loaded, this allows one to produce remarkably realistic and expressive string parts, effortlessly moving between articulations in order to mimic the performance techniques that would be used by a string player. Also, when playing articulations that continue to sound for as long as you hold down a key, the engine detects whether you are playing legato or not. If so then the current bowing is continued and a smooth change of note is heard; if not then you will also hear the prominent attack transient as a new bowing starts.

Add to this control over the string and position on which a given note will be played, and the ability to adjust the dynamic response and vibrato style of the instrument, and what you have is a collection of string sample libraries that not only sound as magnificent as the instruments on which they are based, but that can also faithfully recreate the many different performance techniques and nuances employed by expert violin, viola and cello players.

The combined age of the instruments used for Cremona Quartet is over 1300 years. Their combined value is so vast it could even make Jeff Bezos wince. Yet by capturing in so much detail, and with so much playability, instruments of such supreme quality and historic significance, NI, e-instruments and the Museo del Violino has made these priceless rarities available to all. Cremona Quartet is something very special indeed. 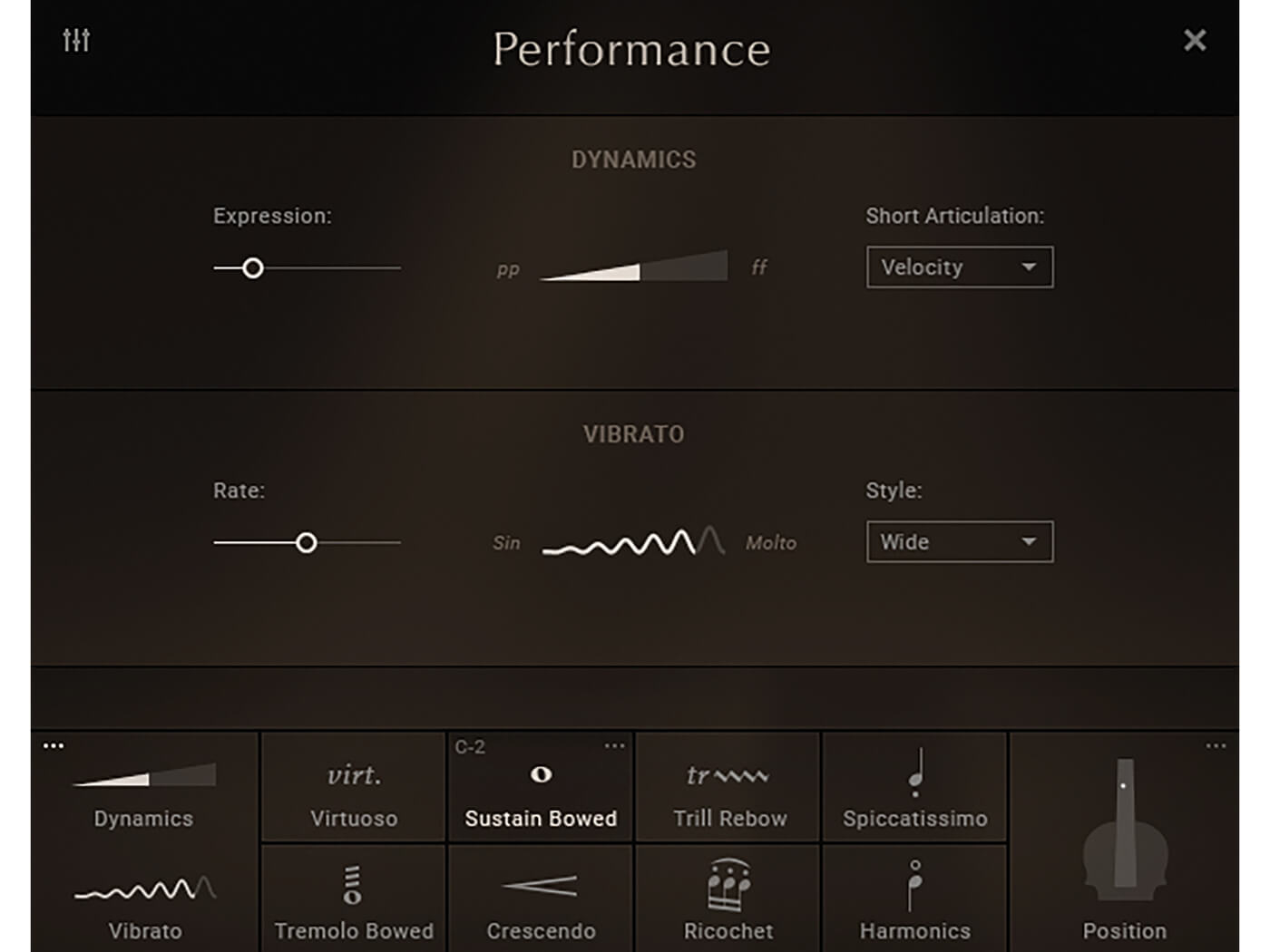 Sample libraries of orchestral instruments tend to be of most use to those producing music for TV and film. If this is you then you are likely to already have a good collection of orchestral section and solo instrument sample libraries, but you are also likely to be seriously impressed by Cremona Quartet. Even if string quartet music is the last thing you expect to compose, the individual instruments within the collection stand as superb examples of just how good, and just how playable, sampled solo string instruments can be. In many respects it doesn’t actually matter that these libraries are sampled from priceless Stradivari, Del Gesù and Amati instruments – your clients and audience are unlikely to notice – but knowing that they are makes them feel all the more special to use.

Session Strings 2 brings the sound of an 11-piece string ensemble to your fingertips. This library has a detailed and intimate sound and a good range of articulations, and is great for bringing colour to a wide variety of contemporary styles, as well as being useful in film and TV scoring.

In this library, Spitfire have captured the instruments and musicians of the award-winning Sacconi Quartet, and arranged those recordings into a playable patches that feature multiple articulations and four types of true legato. Much attention has been focussed on reflecting the way a quartet’s sound gels together based on the musicians’ performance.