MiMU’s first synth instrument makes granular synthesis accessible and has some unique features, but how does it have enough depth for serious sound design? 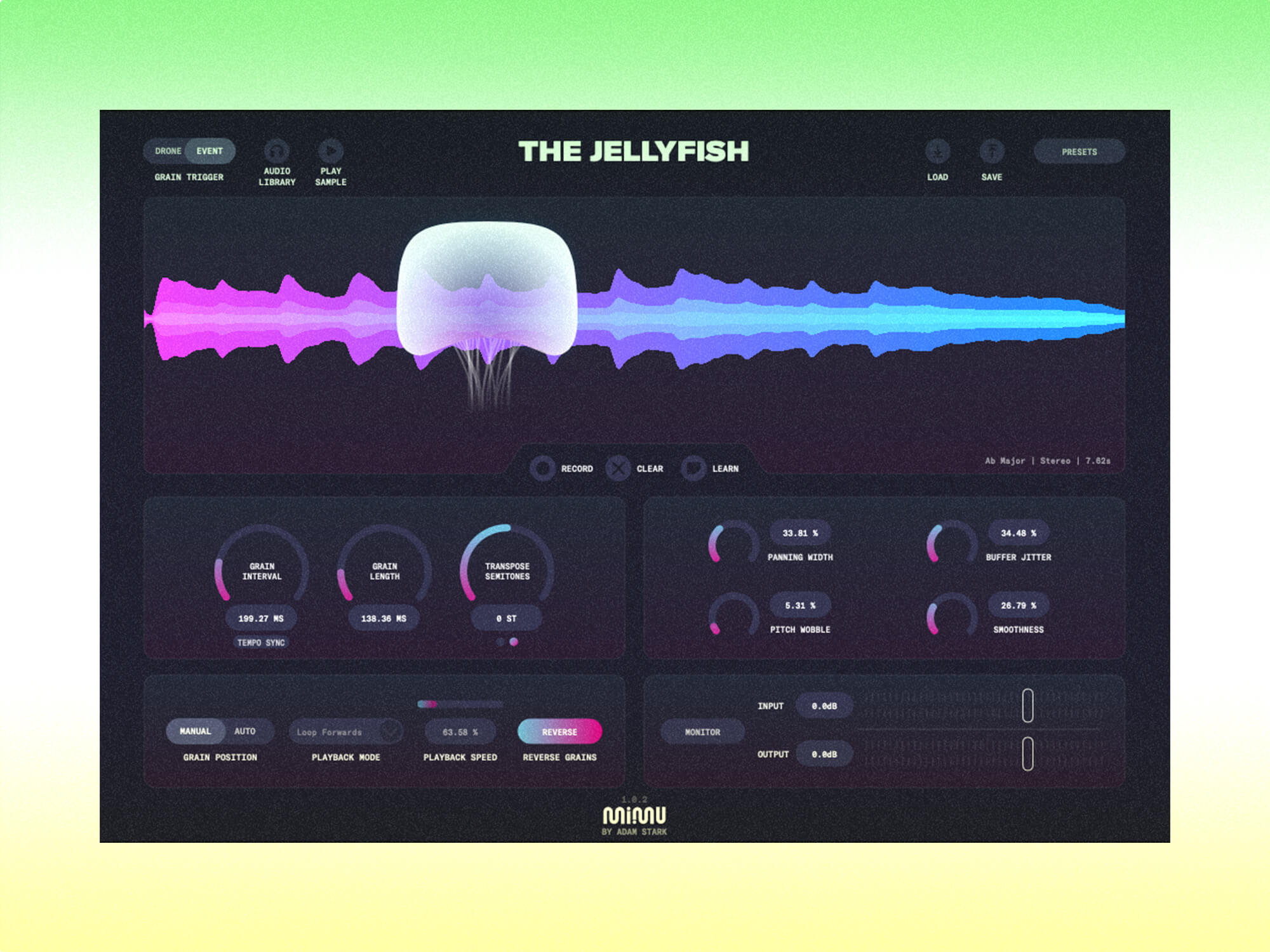 MiMU is undoubtedly best known for its MiMU Gloves controllers, created alongside and championed by Imogen Heap. The Jellyfish is the company’s first software instrument, with a focus on creative granular synthesis control via samples and live recording. There are some quirks to the interface that make it a little clunky to use, but it’s easy to instantly turn any audio into an epic-sounding drone by looping and modulating tiny grains of sound.

The GUI has a pleasing pink and cyan aesthetic against a dark background that’s easy on the eye. A large waveform dominates the upper half, with a translucent jellyfish floating in front of it. Its position from left to right shows which part of the waveform is currently looping and playing back, and you can choose from a Drone mode that’s always playing, or an Event mode that triggers via MIDI.

To get audio into the plugin, you can either choose to load one of the 67 included library files that include guitar, piano, sound fx and an array of sung and spoken audio loops, or you can import or drag and drop your own. There’s also a small collection of 33 presets that show off the kinds of sounds The Jellyfish is capable of, but really the fun comes from working with your own audio.

Perhaps most interestingly, there’s a third option for importing sound through a live input. Record and Clear buttons in the centre will live record any audio coming in through the sidechain input of the plugin. This has clearly been designed with a nod to live performance, especially when combined with the Drone mode. You could record a sung or played line, and have it instantly played back as an ethereal drone, then clear and record new parts as the performance progresses, manipulating parameters with your MiMU gloves (or more standard controller).

Getting deeper into the controls, you have dials for the Grain Length and Grain Interval, the latter of which can be set to Tempo Sync with beat divisions. When set very short, you get a more sustained sound that micro-loops the jellyfish’s current position on the waveform, or when set longer, you get more of a pulse. Longer grain lengths will give a pad-like quality and short lengths a more staccato sound. There’s also a Transpose dial for changing the semitones and fine-tuning of the playback.

Just using these controls you can get some very interesting and unique sounds, but looping any piece of audio can run the risk of sounding robotic, which is where the next set of controls come in. The Panning Width dial adds some random pan to each grain giving instant depth, the Pitch Wobble varies the pitch to create a pleasant chorus like sound at low levels, and the Buffer Jitter adds some random movement to the playback position. Even at just 2%, this instantly makes the loop sound more organic, and at higher amounts it can even start to sound erratic. This will massively depend on what audio you have loaded though. Which brings us to a very important point, although you can get some interesting sounds no matter what audio you import, The Jellyfish really excels when working with more sustained material that has some change over time. This allows things like the Buffer Jitter to pick out more subtle variations either side of the loop point, and it sounds fantastic when you slowly sweep the playback position.

To round off the main controls, you have Smoothness, which changes the grain shape from more of a sharp attack and release, to something smoother and rounder. This is echoed in the graphic for the jellyfish, which slightly changes shape, along with the Grain Length control that also changes its width. This feels like a somewhat underused idea though, as making the jellyfish itself react to other parameters could improve the overall visual language of the synth.

To help make the instrument more playable, there’s a MIDI-map mode. If you click the Learn button, you can then hit MIDI keys that will place a marker at the playback position. With one marker, the synth then plays back that grain loop chromatically across the keyboard. If you have two or more markers, then it will jump to the playback position when each key is pressed allowing you to do things like pick out different looped words in a sentence. It’s a shame that you can’t easily MIDI map other parameters from within the plugin, but most DAWs have a solution for this.

Along the bottom, you get Input and Output sliders, and also a Reverse button that reverses the grains often resulting in a smoother sound. After that, the final part of the plugin lets you switch the grain position from Manual to Auto. With Auto selected, you can choose from Loop Forward, Loop Backwards, Random Walk, Random Jump and LFO playback modes. This automatically sweeps the jellyfish across the waveform via a speed slider that goes from 1 to 400 per cent It’s good for adding some movement, but the results aren’t always especially rhythmic as there’s no tempo sync. Also, 400 per cent isn’t particularly fast and you don’t get to change the LFO shape or range, so it feels a touch limiting from a sound design perspective.

This is an overarching feeling when trying to program the synth. It’s fairly intuitive and easy to use, but it feels overly simplified in places and is somewhat limited compared to other granular synths. For example, it’s monophonic and there’s no amp envelope, so you can’t make a playable pad sound that fades smoothly to silence, or a percussive sound. When creating pulses, it would be useful if you could change the attack and release shape of the grain separately, or at least give a few options. It would also really benefit from some built-in effects and a compressor or gain rider to help bring out quieter sections of looping audio. Although that last one is perhaps more of a wish than a necessity.

These things aside though, MiMU should be commended for making granular synthesis relatively easy and accessible. The live recording and audio markers are unique features that make it stand out, even if the editing lacks a little depth, and as a tool for crafting organic, ambient scapes, it’s well worth a look. 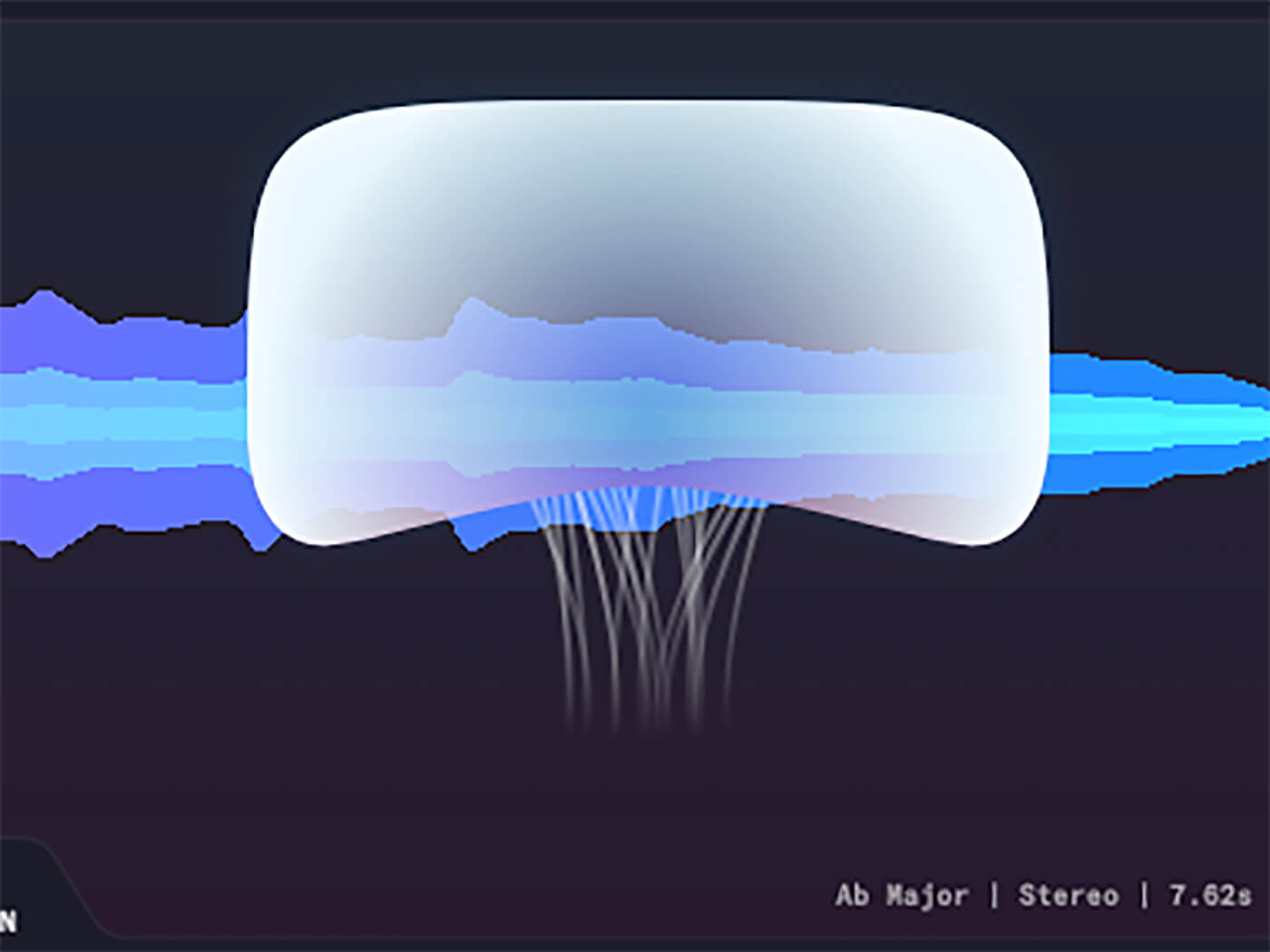