Scottish toolkit creators Krotos’s new concept comes with modulation options aplenty and an emphasis on ‘audio movement’ – but will it move us? 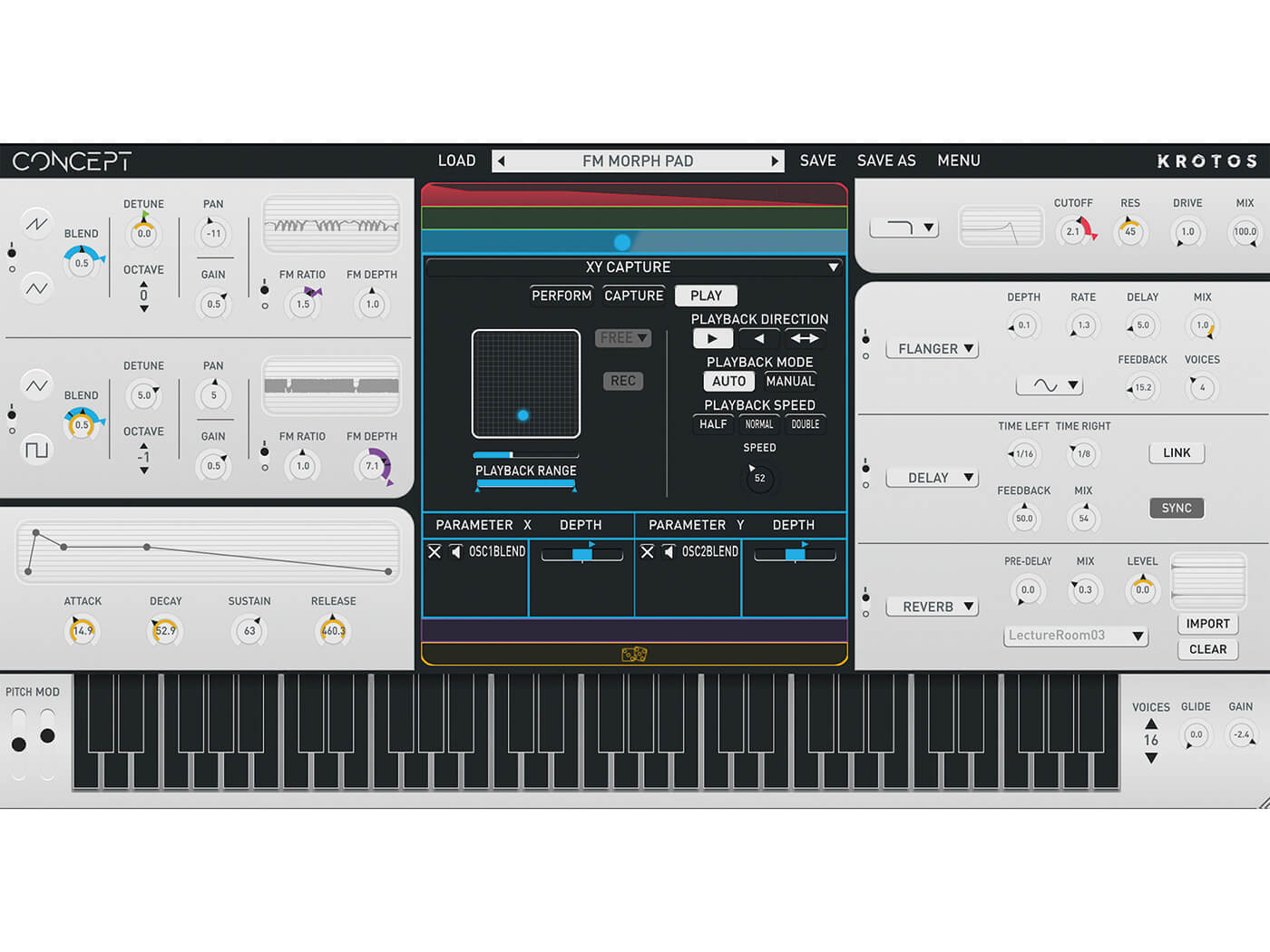 Edinburgh’s Krotos Audio is approaching synthesis from a different perspective. The software-development company’s core products are aimed primarily at those writing music for picture and video games, with sound design, vocal manipulation and effects processing their key components. Concept, then, is a logical step into synthesis and sonic manipulation, and brings plenty of the know-how developed in other areas of sound design to a more synth-suited environment.

On the upper left-hand side of the interface, you’ll find the oscillators. There are two of these and they can house two waveforms each. You can choose a shape for each one from a drop-down menu and then set a balance between them using the Blend dial. There are positives about this interface but a few negatives to be found too.

On the plus side, each oscillator engine features its own on/off rocker switch, which is extremely handy. The blend dial takes a tad more getting used to, as the rotary dial that sets waveform balance works from left to right but the waveforms themselves are stacked vertically, meaning the rotary position doesn’t immediately tally with your chosen blend.

Each oscillator features its own detune dial and octave switcher (which govern both sources), and there’s also a pan dial and a gain control for each too. The pan dial makes it especially simple to create ultra-wide sounds; just pan one oscillator hard left, for example, and load a subtly detuned version of the same sound into the second oscillator before panning it to the right.

There is also a frequency-modulation option built into each engine, with its own power switch. Activating this enables an FM circuit (using a separate sine wave oscillator) to rough things up and add internal modulation at the oscillation stage. Ratio and depth dials control the strength and speed of frequency modulation. Signals then pass into the simple filter section, based on a classic ‘ladder’ design. Only low- and high-pass modes are provided, but the filter is resonant and features a growling drive circuit that adds internal harmonic distortion, which gets fruity nice and quickly when it’s cranked up.

There’s a Mix dial too, meaning you can use the filter as a parallel circuit alongside the original unfiltered sound offered from the oscillator stage’s output. The effects suite features eight effects – EQ, saturation, compressor, limiter, flanger/chorus, transient shaper, ring modulator and convolution reverb – and allows three modules to operate simultaneously. Selecting effects brings up a range of parameters applicable to each, and there are some considered touches here that let you tailor your sounds in sophisticated ways.

Back over on the left-hand side of the interface, you’ll find a master ADSR envelope
that shapes amplitude for the whole sound. The envelope movement is animated, with a red dot tracking its course from start to finish. Of course, if you’re using a fast-acting envelope, you’ll barely see this but for slower and more evolving sounds, it’s extremely useful – especially for teachers, to whom it can provide an accessible device with which to explain envelope behaviour.

The real power of Concept lies in its modulation section, which occupies the central area of the interface. This provides a matrix of five modulation sources that can all be used within any of one of Concept’s patches.

To get started, select one of the modulation sources by clicking one of the coloured panes. By default, these will be set to an envelope, an LFO, the modulation wheel, an audio-input source and the Tweak It randomiser. Each menu can be customised, however – if you wanted to replace an LFO with a second envelope, for example, you could do so via a pane’s drop-down menu. The permutations here are bewildering to think about.

You can also configure the parameters of each module in ways appropriate to its setting, allowing you to, say, edit an LFO’s shape and speed, or an envelope’s attack or release times. It’s here, as the saying goes, where the magic happens. Drag and drop the name of any parameter you like into the selected modulation source and it will be added to a list. Here, a bar selects the range over which the parameter will be modulated – you can select inverted shapes set by choosing a negative value.

Multiple parameters can be assigned to the same source, as you’d hope, and here the use of colour with the modulation panes comes into its own. Concept it’s just a pretty face; a quick glance around the interface will inform you which parameters have been mapped where, thanks to the modulator’s assigned colours.

The three most notable panes are the Audio Input, the Tweak It randomiser and the X-Y Capture pad. The Audio Input lets you route in any signal for analysis, with the result then routable into any parameter.

In addition to the amplitude analysis you might expect, you can switch input tracking to detect Pitch. Imagine tracking a lead vocal line and using the incoming pitch as
a control source for, say, the detune of an oscillator, or the cut-off filter movement of an accompanying synth line. Similarly, in Amplitude mode, using an incoming drum or percussion signal as a trigger for saturation amount, resonance boost or the decay time of the master envelope is a fun and inspiring source of pleasure.

Like the other modulation sources, the Tweak It randomiser lets you collate a list of parameter targets and set a range for each. On top of that, though, you get the chance to stick or twist. Clicking on the lucky-dice icon generates randomly assigned amounts within those target ranges. The more targets you add, the more likely the resulting sound will deviate significantly from its predecessor, which makes for some staggering, surprising and altogether unusual sounds.

If you want animated sounds that blend seamlessly with your track’s BPM, XY Capture is ideal. Add parameters to the X and Y axes of this modulation source and then get experimenting with manipulation.When you’re ready, you can record this movement, either freely or over a number of bars within your host project. It’s a smart and snappy way to create evolving sounds contoured to your track’s needs. Modulation routing seems to be Concept’s strength.

Its synth engine can come across as somewhat underwhelming at first. There’s nothing wrong with it as such, it just doesn’t seem particularly special. But all of that changes the moment you dive into the routing signals, and the Audio Input and XY Capture modulation capabilities without question go a long way towards justifying the price of entry.

Once you’ve grasped its colour-coding and modulation potential, Concept can be extraordinarily addictive to use. Building snarling, wonky and pulsing basslines from what started life as a static held note via a beat loop in your track, while separately automating those same parameters from tempo-synced LFOs is tremendously fun and reveals hidden depths to Concept’s personality that you might not have imagined at the outset.

There is some stiff competition out there from similarly priced products, so it might be best to download the demo and see if it sates your appetite. For a debut synth, though, the Scots have done a spectacular job, especially with the modulation. Don’t be at all surprised if you get hooked to it – because we won’t be. 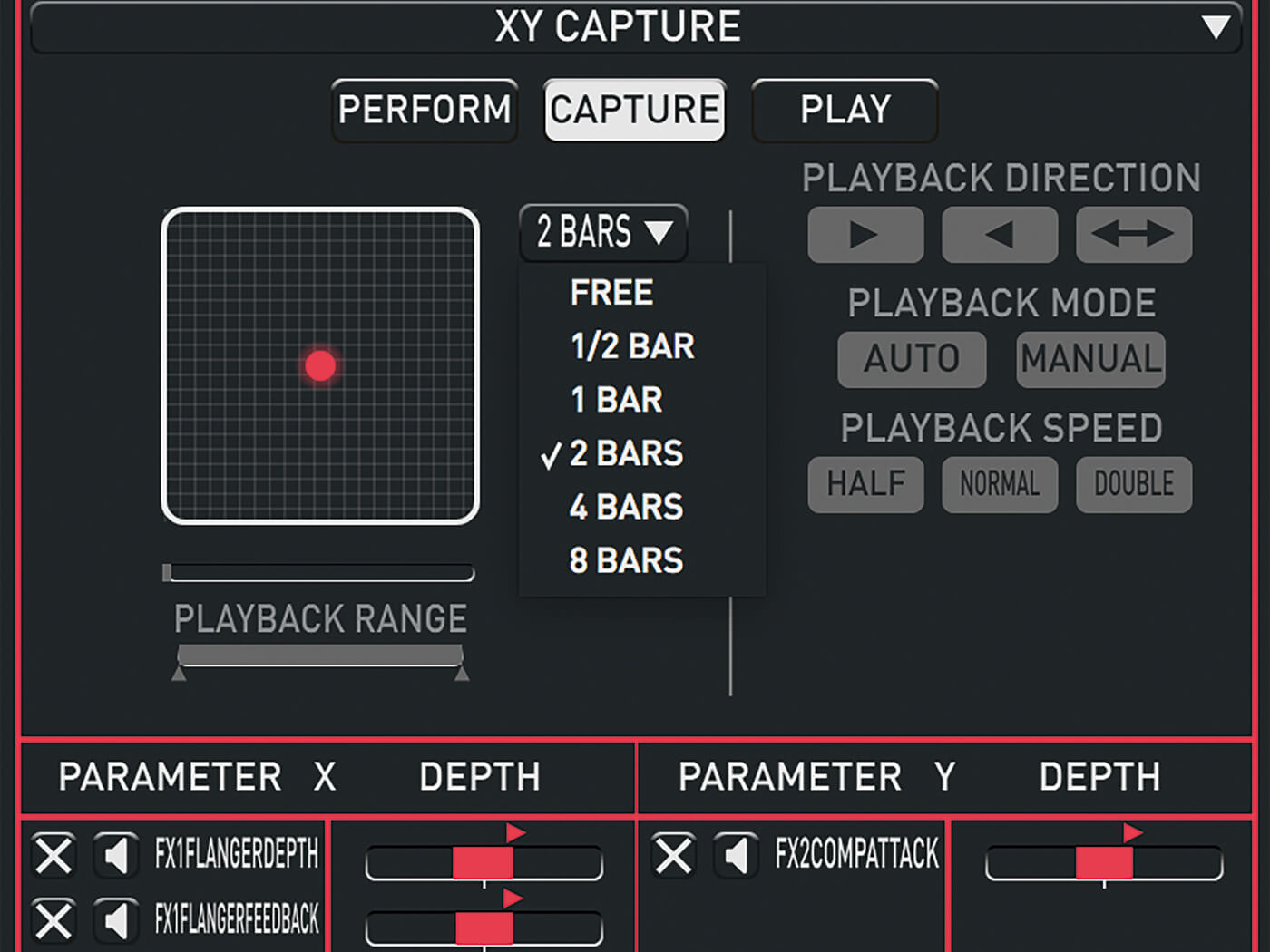 If you’re interested in sculpting evolving sounds and are well primed to pluck out the best bits from randomly generated audio, then Krotos’s debut synth comes recommended. If you’re after a more straightforward synth, though, Concept may not be for you. There are better equipped options at this price point. But for pushing, warping and bending the boundaries, this one might ensnare you, fast. 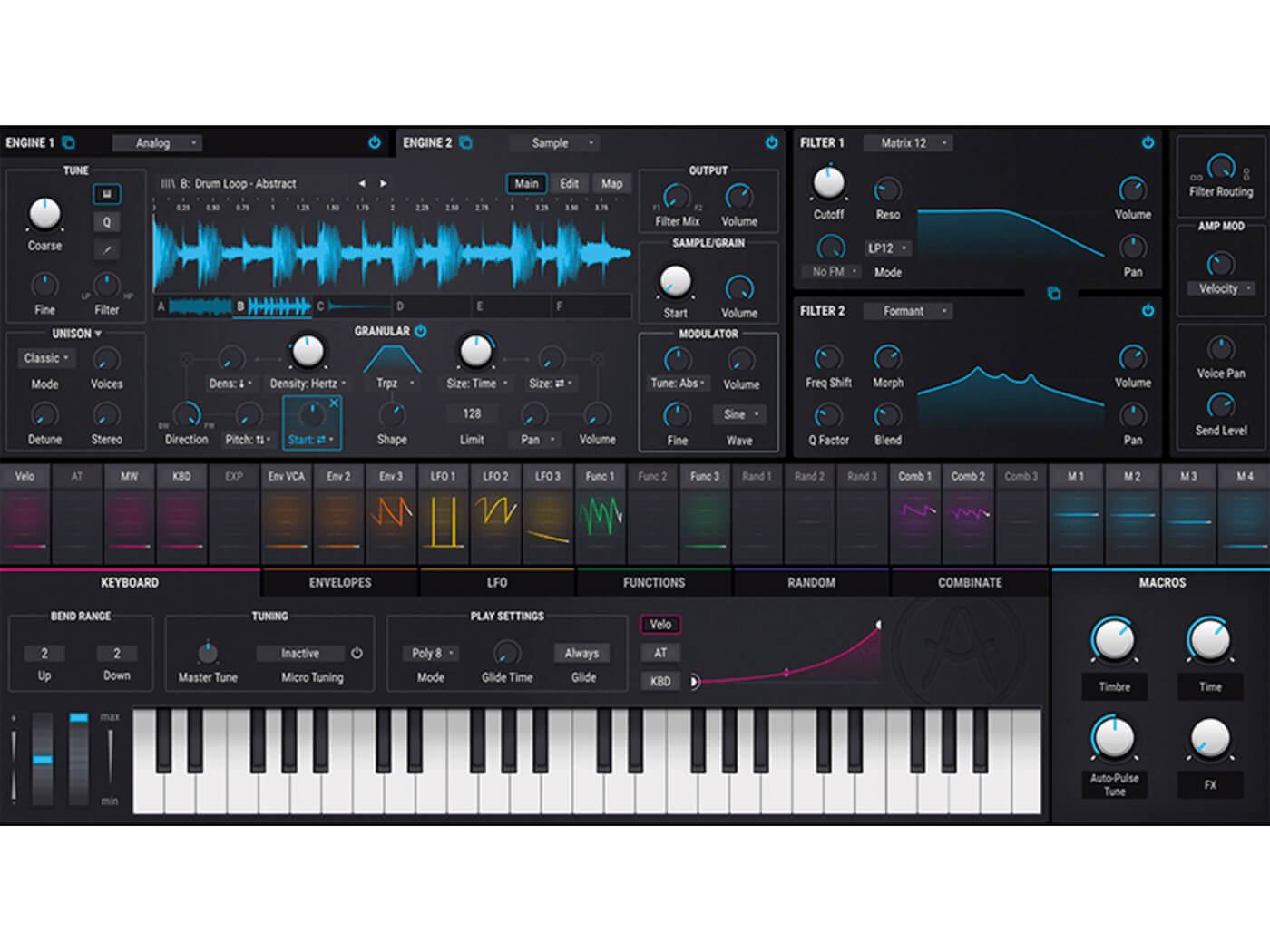 Concept’s modulation routing is reminiscent of that of Pigments. With masses of modulation sources and a new sample engine, Arturia’s is a sophisticated beast but has a higher price. 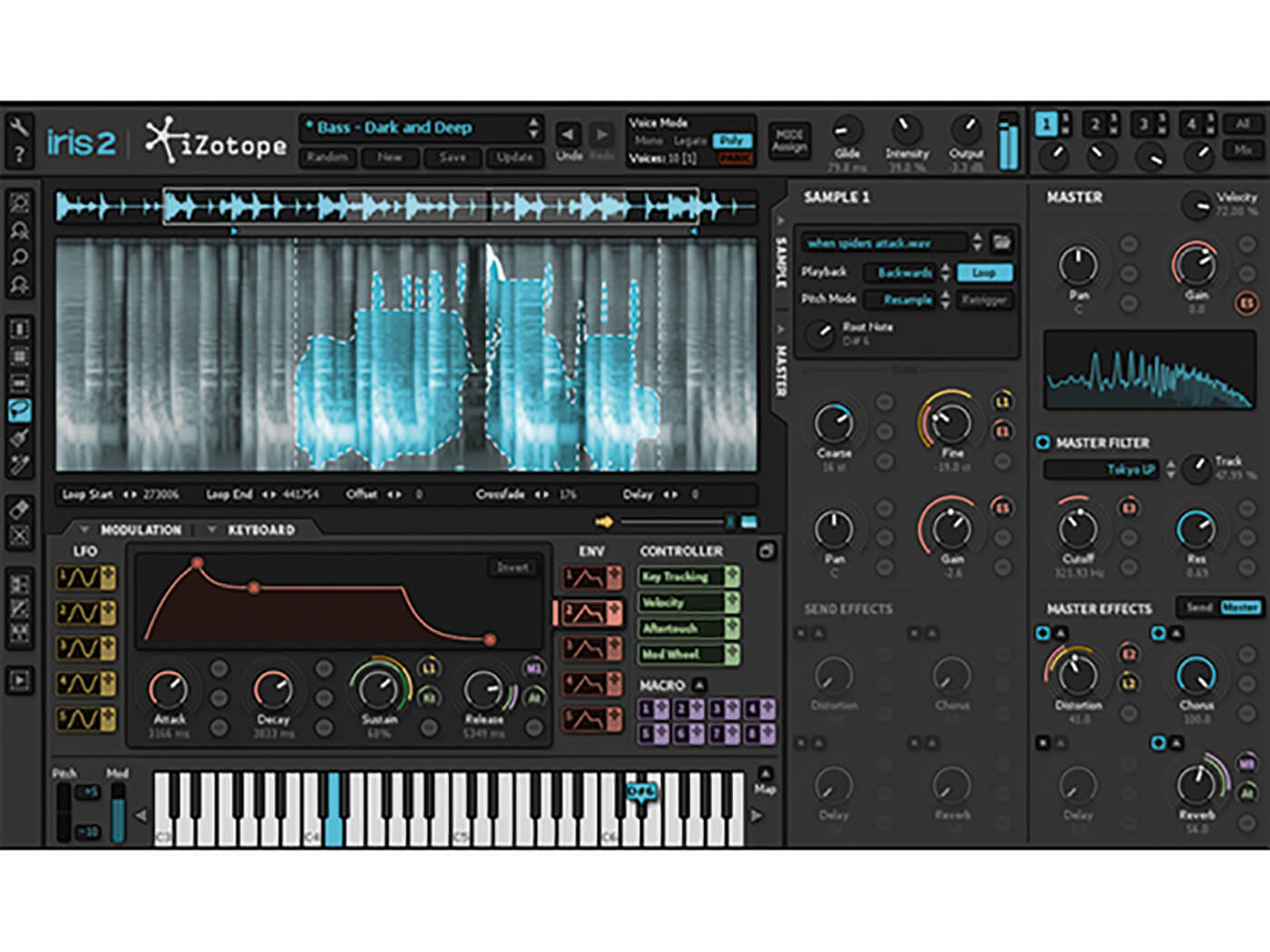 A Concept competitor for its modulation and audio import options but a different type of synth. It’s equally capable, however, of crafting sublime and unexpected sounds.