With a lot lurking beneath its hood, Imaginado’s multi-layered new soft synth could add the sonic sparkle you were looking for. 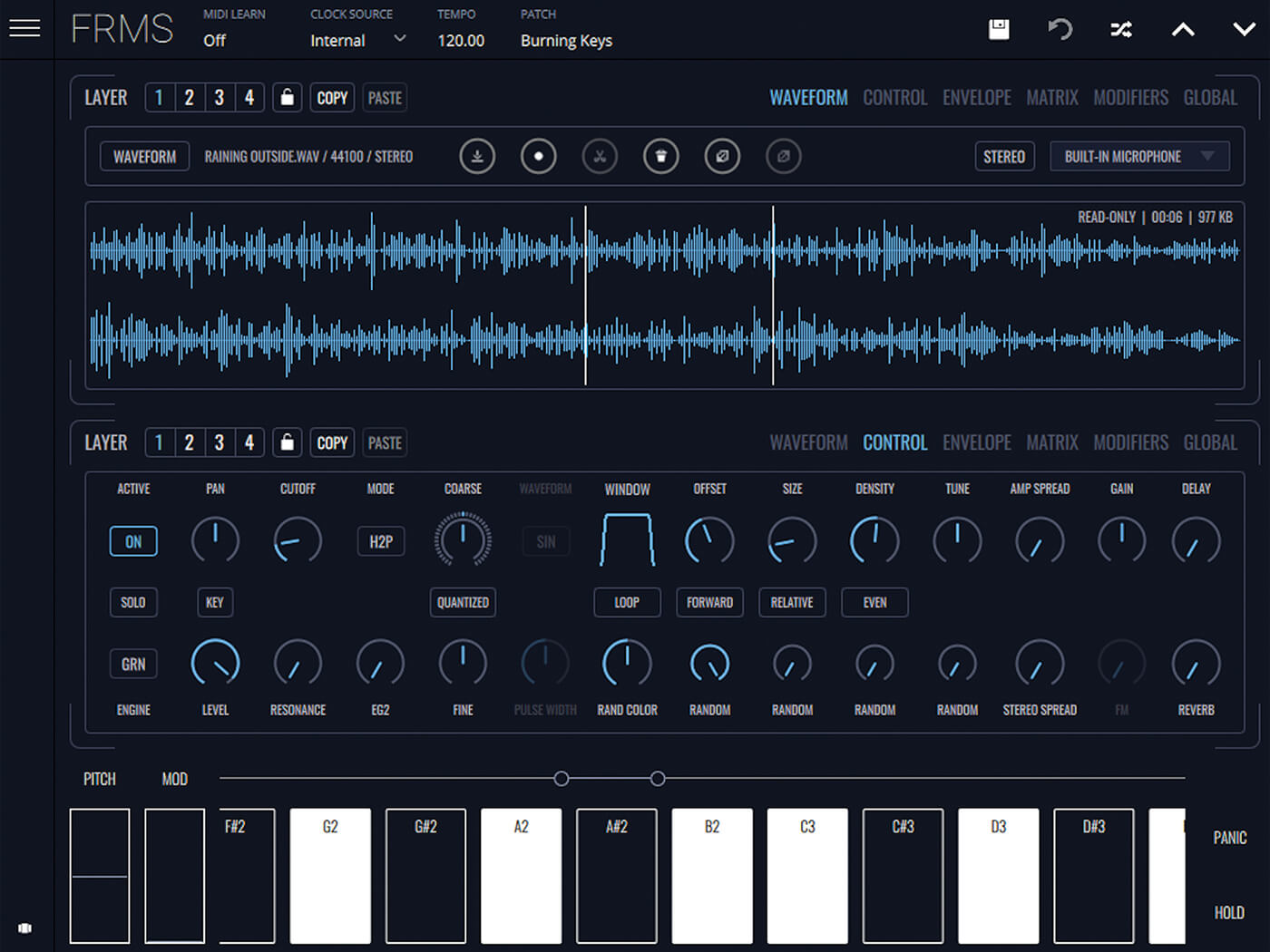 It’s fascinating how we humans have always used our most cutting-edge technologies as a means of making sound and music. Even back when the extent of humanity’s scientific endeavours was banging rocks together to create slightly more useful ones, we found ways of making instruments – perhaps by striking rocks together, or carving patterns into stone and scraping them with sticks.

By the time we reached the 20th century and the advent of the electronic age, sound creation had been elevated into a science in its own right. By now, we had a plethora of new techniques with which to craft new sounds and instruments. The invention of computing and digital-signal processing would truly revolutionise music and sound design once again, unshackling them from the expense, bulk and complexities of physical circuitry (or indeed rock formations), and thereby allowing synth designers to combine disparate techniques in any way they could imagine – all of which brings us neatly to FRMS.

These synth engines have been brought together using layers, of which FRMS has four, each of which can operate as either a subtractive or granular synthesizer. In subtractive mode, you get a standard single-oscillator synth with four waveforms: sine, triangle, square and saw. But it’s FRMS’s granular mode that’s the primary attraction here.

Granular synthesis works by extracting small sections known as grains from a pre-existing waveform, applying time and pitch processing, then linking the grains back together to form a new waveform. Because they’re based on the sound of another waveform, the newly created waveform will share the timbral characteristics of its source, while being distinctly different from it.

This way, it’s possible to create an almost limitless number of waveforms from just a single source. Imagine the creative potential, then, that comes with FRMS, which features a library of about 150 waveforms – ranging from instrument recordings to pure esoterica – and lets you drag your own audio files into the equation too. You could even use a live performance or a send from another track in your DAW as a real-time source for the granular engine.

Both the subtractive and granular synth modes have a multimode filter with 2- or 4-pole low-pass, 2-pole band and high-pass, and notch options, along with a pair of ADSR envelope generators. Each layer also has an independent modulation matrix that allows you to route the layer’s envelope generators and/or any of the four global LFOs to the layer’s synth parameters.

The output of the four layers is combined in the final global section, which can be done as a simple mix of the four signals, as you might expect. But you can also enable FRMS’s FM synth mode, which takes the output signals from each layer and handles them as FM operators, with one layer modulating the frequency of another to create novel overtones and timbres. As with any FM synthesizer, the results are heavily impacted by the routing of the operators – often referred to as the FM algorithm but called simply the FM mode by Imaginando – and this determines the way the layers/operators are linked. FRMS offers eight such modes.

At the end of the chain, you can add a final bit of spit and polish via reverb, delay, and a master filter that can operate in low- or high-pass modes. 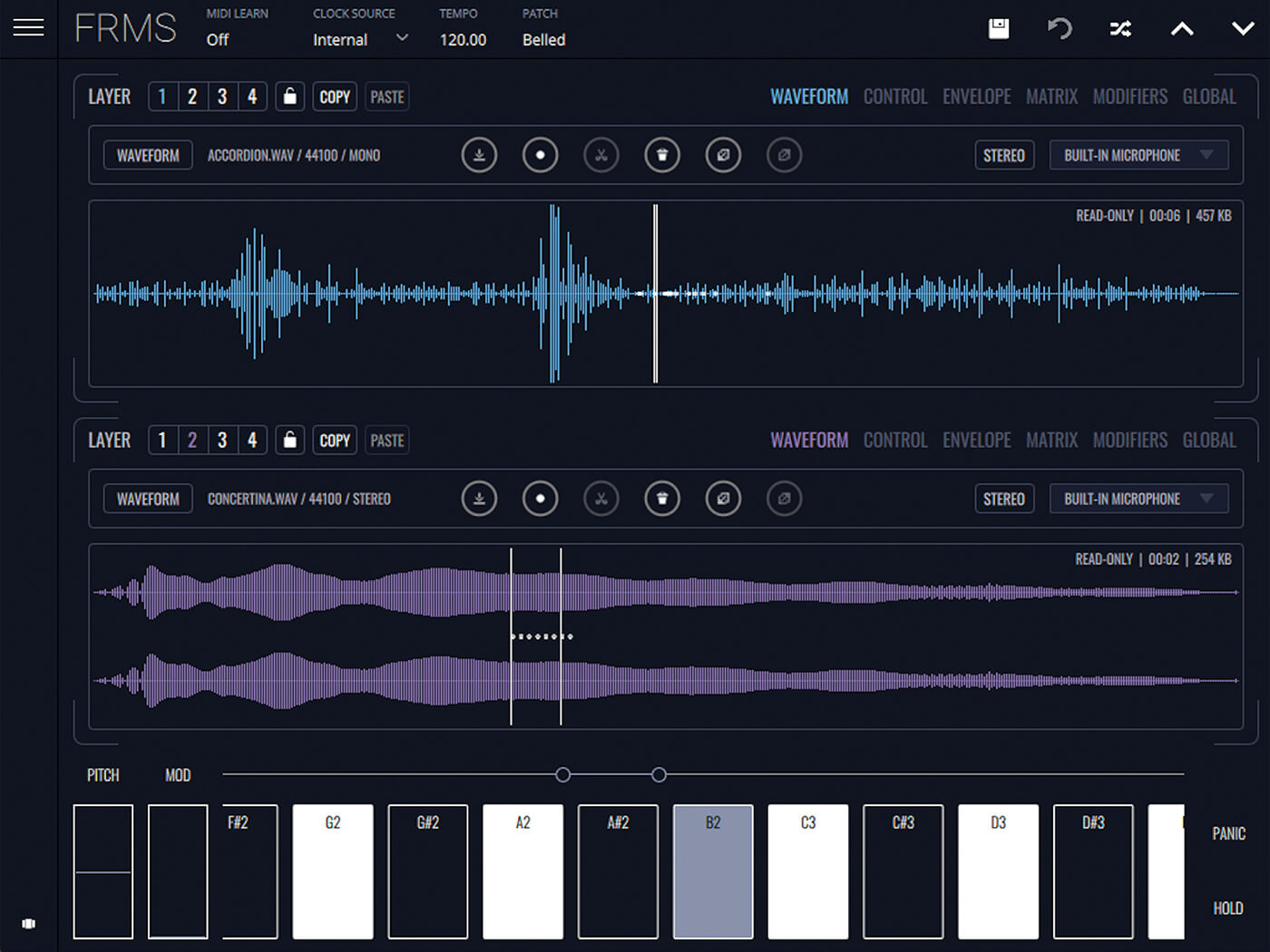 With three synth engines to deal with, you may worry that FRMS is overly complicated but it’s actually remarkably easy to use. The interface features two main editing areas and you can select the layer and parameter set, referred to here as a panel, that will be displayed in each. These panels gather related synth readouts and/or parameters. For example, the waveform panel lets you load waveforms for the granular synthesizer (or displays the layer’s subtractive waveform when in subtractive mode) and provides visual feedback on how that wave is being used by the synth engine. The control panel, meanwhile, is where you’ll find most of the actual knobs for setting the primary synth parameters.

This doubled-up layout is flexible and allows you to work simultaneously on the same panel from two different layers, or on different panels from the same layer. You can also lock the layer selection of the two panels together, so that switching layers in one panel will also switch the layer in the other. It’s not the easiest arrangement to explain but it’s terribly intuitive and even elegant in practice, and it makes patch creation and editing superbly straightforward.

Below the main editing panels, FRMS features an integrated control surface with keyboard and chorder modes. The unusual keyboard’s black keys are the same size as its white keys, which will likely confuse some. The chorder mode’s panel of trigger pads is useful, though, as is the synth’s full MPE (MIDI Polyphonic Expression) support.

Of course, this significant synthesis power comes at the cost of DSP overheads, and FRMS can be ravenous in this regard, gobbling up significantly more system resources than many other synths. Its live input option didn’t work in standalone mode when using a multichannel audio interface, because it had no way of selecting the actual bus to use as the source. The live input didn’t work in Cubase either, where there was also no way to route a signal to the synth. It does work in Logic Pro, Ableton Live, Bitwig, and REAPER, however. That said, we reviewed early-release software here, and imagine that Imaginando is working hard to improve the synth’s efficiency and eradicate such bugs.

Both granular and FM synthesis have well-earned reputations for their ability to create distinctive and expressive sounds, and by combining these methods, Imaginando have created an extraordinarily flexible instrument. Moreover, the inclusion of subtractive synthesis can lend an underlying richness and tonal solidity that would be tough to achieve through the other two synth engines alone. The results can be exceptional.

The combination of synth engines, and the flexibility of the granular synth engine in particular, makes FRMS a formidable sound-creation toolbox but its results may not suit all tastes. The instrument excels at producing a wide variety of sound types – pads, leads, basses, bells – and makes finding these easy via the categorised patch browser.

With its flexible modulation routing, FRMS is also a spectacular synth for producing sounds that seem to exist in a state of continual evolution, or that pulse and throb with the beat of your music. The results lean dramatically towards the arenas of electronic-music production though, so if you’re looking for something more subtle or more acoustic in nature, look elsewhere. Everyone else? Download the FRMS demo and check it out. 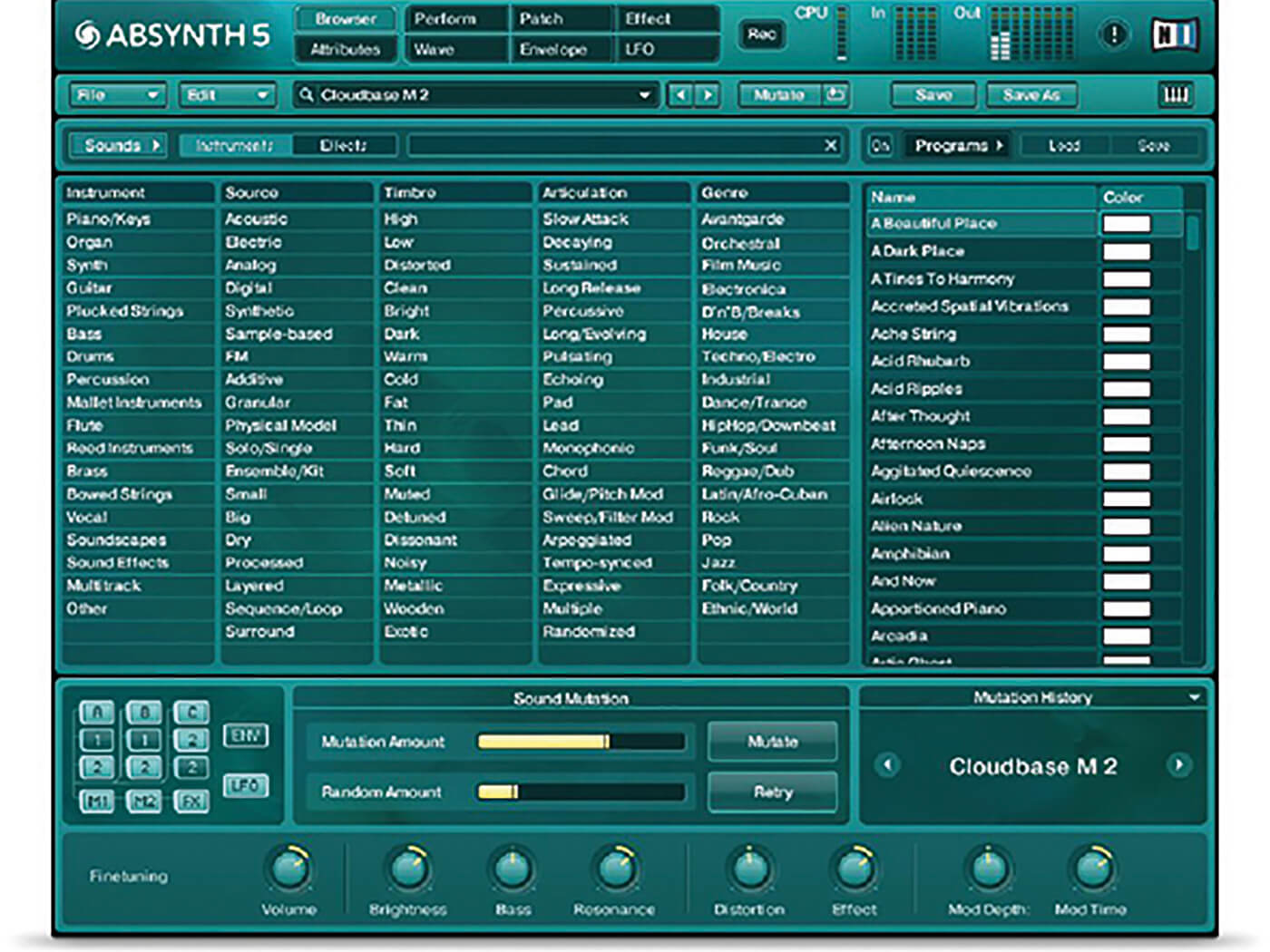 An excellent example of what granular synthesis can do, Absynth is renowned for its ability to create glossy swirling pads and rich searing leads. It features a fun mutator system that produces entirely new sounds at the push of a button. 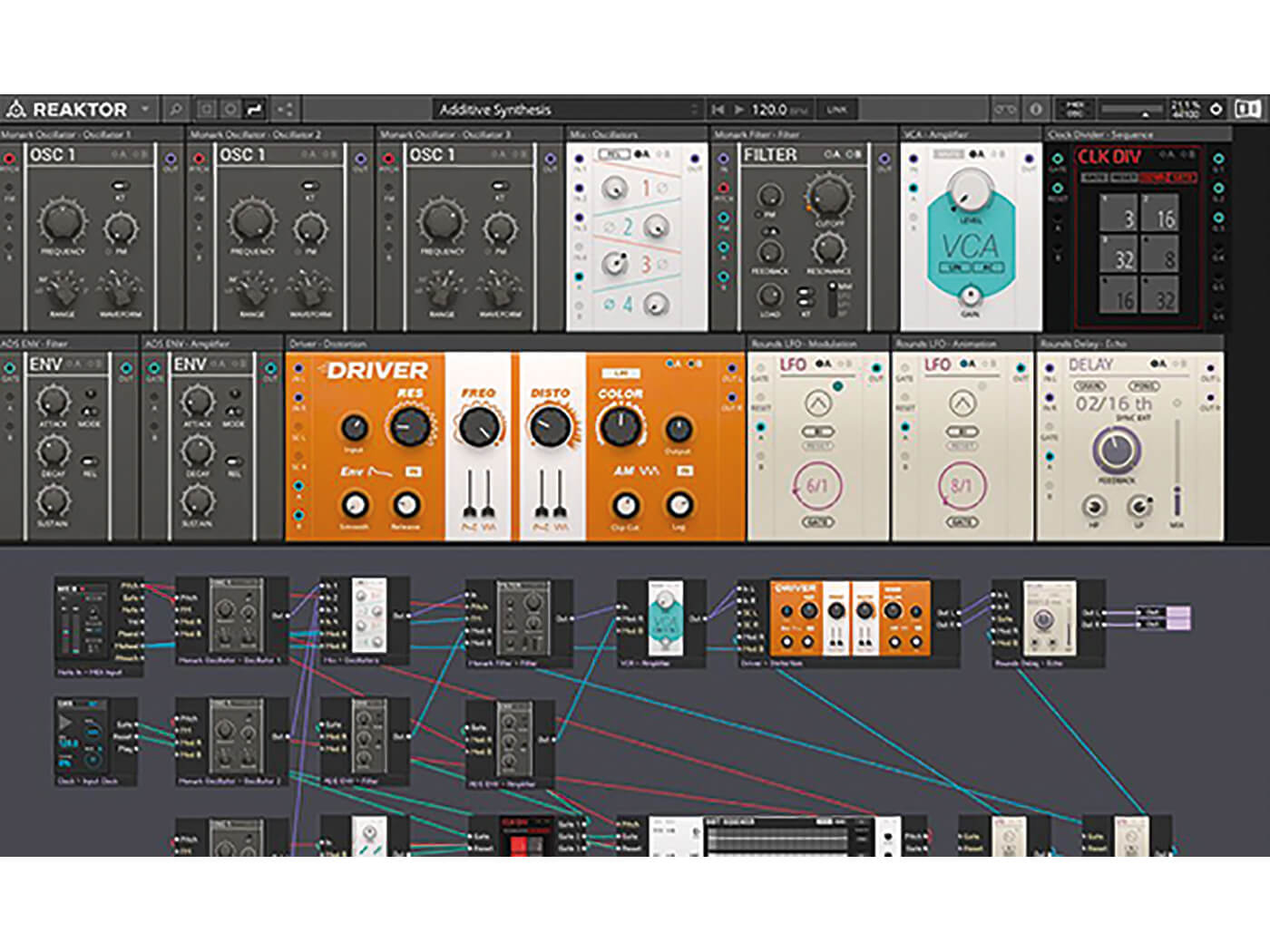 As anybody who has used it can attest, Reaktor is seriously deep. It contains many different synthesis and sound-processing engines, including an extremely malleable granular synth engine. The beauty of Reaktor is that you can link it up with any of NI’s other tools too.