IK Multimedia’s B-3X is the first officially-endorsed version of the Hammond Organ in virtual form, but does it really capture the sonic charms of this intriguing instrument? 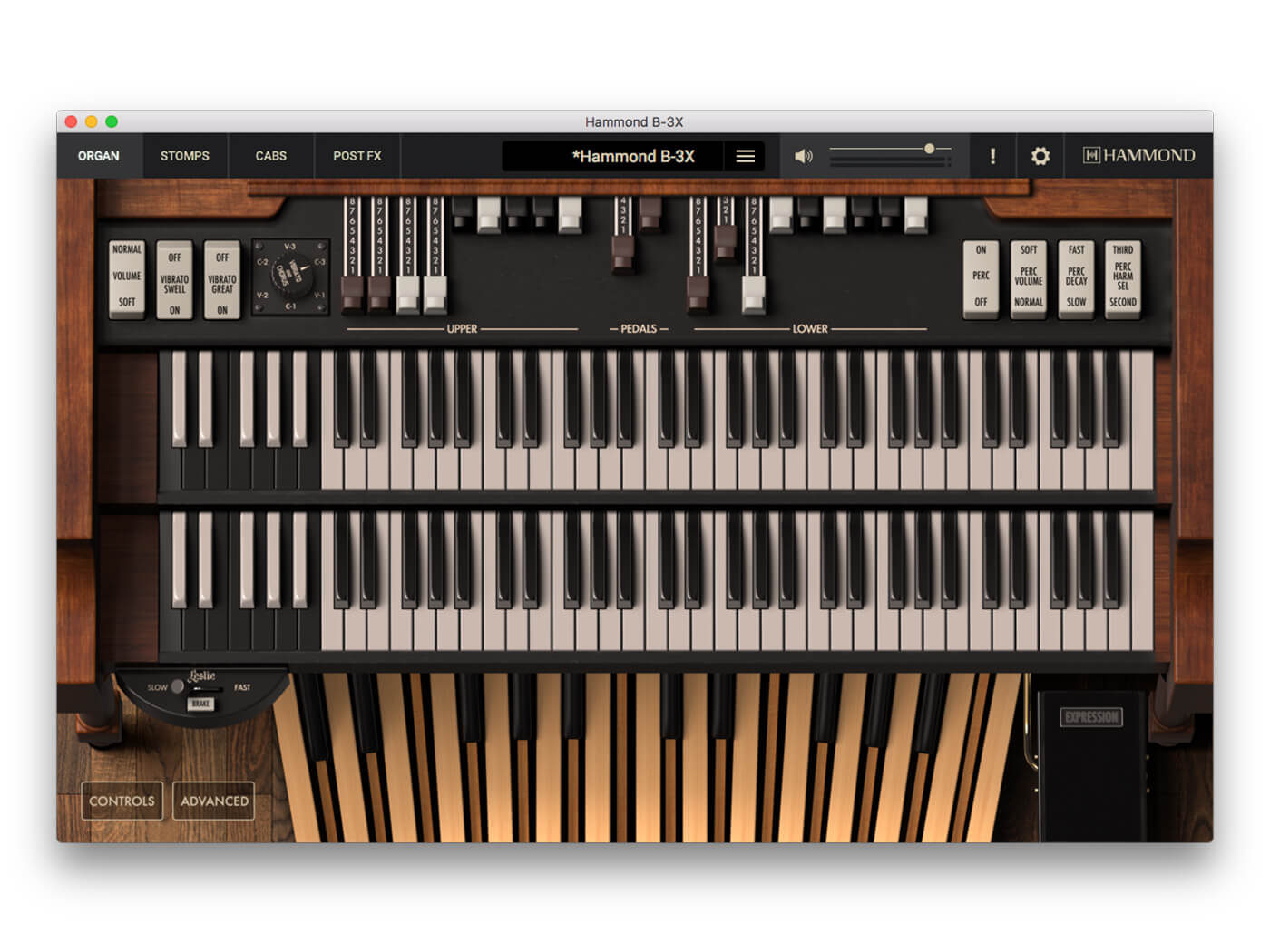 There’s something glorious about the sound of a Hammond underneath your fingers, especially if you’re lucky enough to play a genuine C3 or B3 coupled with a Leslie speaker. It’s a tremendously versatile instrument – from the soft, almost angelic sound of a few drawbars, to the ‘all-stops-out’ sound where the Hammond roars into action. Then you have a series of quirks – like the inertia of the Leslie speaker as you move between fast and slow setting, or the percussive key clicks so evident on the bass notes – that makes it a truly organic musical beast.

In virtual form, though, the Hammond can be a somewhat mixed bag. Native Instruments set an early gold standard with its B4 II organ, but that was sadly discontinued some years ago. Other solutions, like the Vintage B3 included in Logic Pro X, fail to capture the musicality of the real instrument, often resorting to copious effects and add-on features to disguise a somewhat uninspiring sound. However, given that IK Multimedia’s Hammond B-3X has been endorsed by Hammond itself, have we finally got a virtual B3 to be proud of? 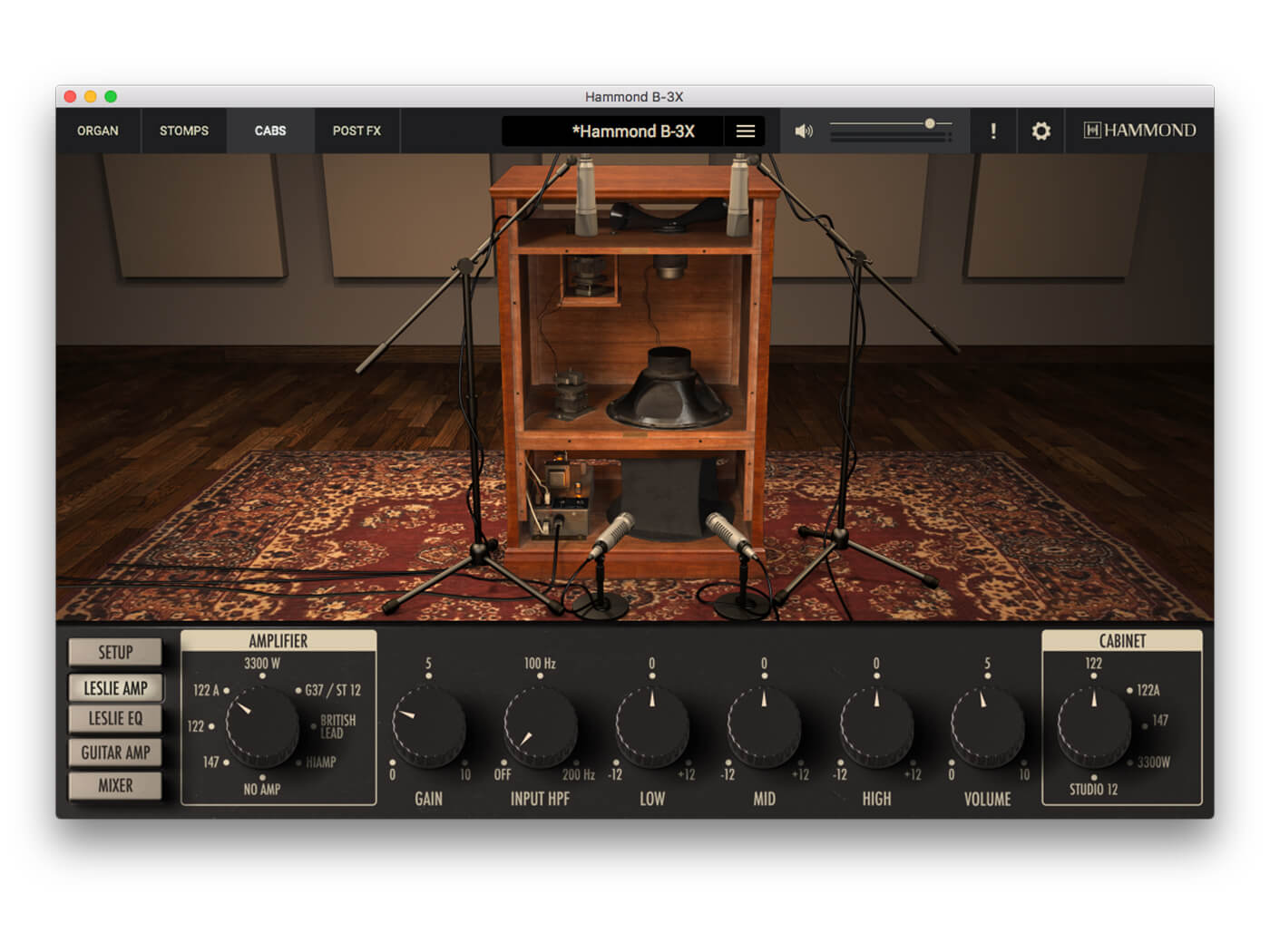 IK Multimedia’s Hammond B-3X has been modelled from ground-up using both IK’s own experience in amp and component modelling, combined with Hammond’s own understanding of the instrument. Given that Hammond itself has moved to modelling (rather than valves) to build its latest generation of instruments – including the excellent XK5 – there’s little doubt that it’s a viable and authentic solution. Two important benefits to also note are the relatively small install size of the B-3X (compared to a sample-based solutions), and the fact that an impressive amount of the organ’s behaviour can be tweaked, including four different ages of tonewheels.

Before we delve into the technicalities of the plug-in, it’s worth saying that the Hammond B-3X immediately captures the tone and musicality of the original instrument perfectly. One interesting way of measuring the success of a virtual instrument is how quickly you adapt your playing in response to its sound, and in the case of the Hammond B-3X, I instantly begun playing organ riffs in the style of Booker T. & the M.G.’s or swirling, church-like Hammond chords with plenty of Leslie action. The drawbars also felt like a tangible musical extension of the instrument, and most notably, there was little or no compulsion to start wading through presets as the different drawbar positions provided more than enough contrast.

Like many virtual Hammonds, the B-3X is designed to be played across two manuals and a set of bass pedals (each assigned to consecutive MIDI channels), although you can still get great results just using the upper manual alone. There’s also plenty of adjustable MIDI mapping, which makes it very easy to configure the B-3X with my Akai MPK88 controller keyboard, although it might have been good to have an ‘inverse CC’ option, so that my MIDI faders work with the same directionality as drawbars. As with the original Hammond, the lower octave triggers the original Hammond preset system so that you can quickly switch drawbars settings on-the-fly.

The organ modelling, which is arguably the key part of the operation, sounds great and features all the key controls – like the internal Vibrato/Chorus and Percussion – that are so important to the musicality of the instrument. The Advanced page lets you access deeper parameters like differently aged Tonewheel sets, qualities of the key click and a personal favourite, the amount of Leakage between the drawbars (in my view, the ‘leakier’ the organ the better). It is also nice to see a Controls view that omitted the keyboard and left you with a clear display of the main controls, which has obvious advantages for use on stage.

Given IK Multimedia’s experience with Amplitude and T-Racks, it’s no surprise to see plenty of care and attention with the post-organ processing. The Cabs page, for example, lets you create a sound that is a hybrid of Leslie speaker, guitar amp and DI output, all balanced on a Mixer page and with plenty of control over the stereo image and Mic distance. In addition to the Cabs, there’s also a collection of pre-amp stomp boxes (covering Chorus, Spring Reverb, Overdrive, EQ and Wah) and well as post-amp studio effects addressing compression, EQ and reverb.

It’s interesting to note that around 30% of the CPU usage comes down to the Leslie, which is a good reflection of the significance of the cabinet in a real Hammond. Delving deeper, it’s great that you can switch between different Amplifier circuitry, as well as various Leslie cabinet designs, which will undoubtedly be welcome by true Hammond aficionados after a specific sound. There’s also a significant degree of musicality in how much drive you apply to the virtual Leslie, moving between a cleaner ‘saintly’ sound in the lower settings to the more distinctive growl when the amplifier is driven.

Given the success of the organ modelling, I didn’t feel too compelled to use the additional effects, but they still sound good and add versatility to the basic sound. The two reverbs work particularly well – one as a pre-cabinet spring reverb (instant retro reverb, in other words) and the other as a studio-grade reverb across the whole output. The 1176-like compressor was also a nice touch, bringing out some of the subtleties that you might miss in a busier mix. 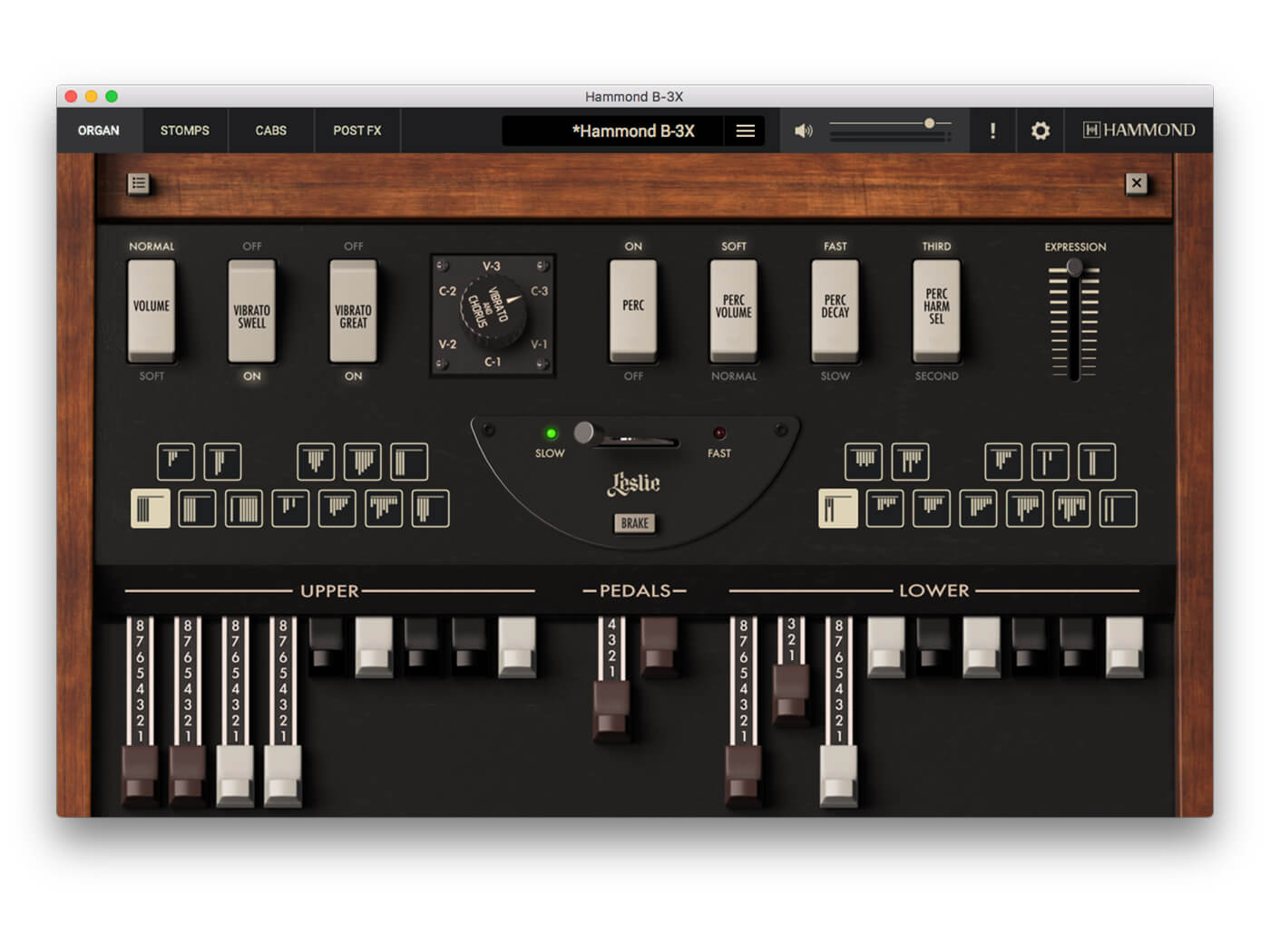 Having waited sometime for an authentic virtual Hammond, the Hammond B-3X certainly delivers in all the ways I’d want it to. The sound of the B-3X is full and open – with the upper tonewheels singing through, and enough depth on the pedals to fill-out the low-end of the mix – and, to my ears at least, it sounds authentically ‘Hammond’ with all the clicks, growls, and grit you’d expect to hear. Indeed, by comparison to Hammond’s own XK5, which costs over £3,000, the B-3X stands up well, although you’ll miss out on the physicality of a real instrument and some of the more advanced modelling aspects like the Multi-contact keyboard.

Although it delivers in sound, there are some minor improvements on the MIDI functionality of the Hammond B-3X that would be good to see added. The aforementioned inverted CC option would be great for anyone using MIDI faders to control the drawbars, and it would also be good to see some form of Split option where both manuals can be accessed from a full-sized controller keyboard. For owners of current Hammond-Suzuki keyboards, there’s some pre-mapped profiles that let you use all the physical controls on your keyboard mapped directly onto the B-3X.

Beyond all the sonic complexities of the modelling, or the ability to process the organ with a variety of effects, the Hammond B-3X is a pleasure to play. The B-3X is an instrument you can get lost in, and something that rewards with a dynamic, musical interaction. 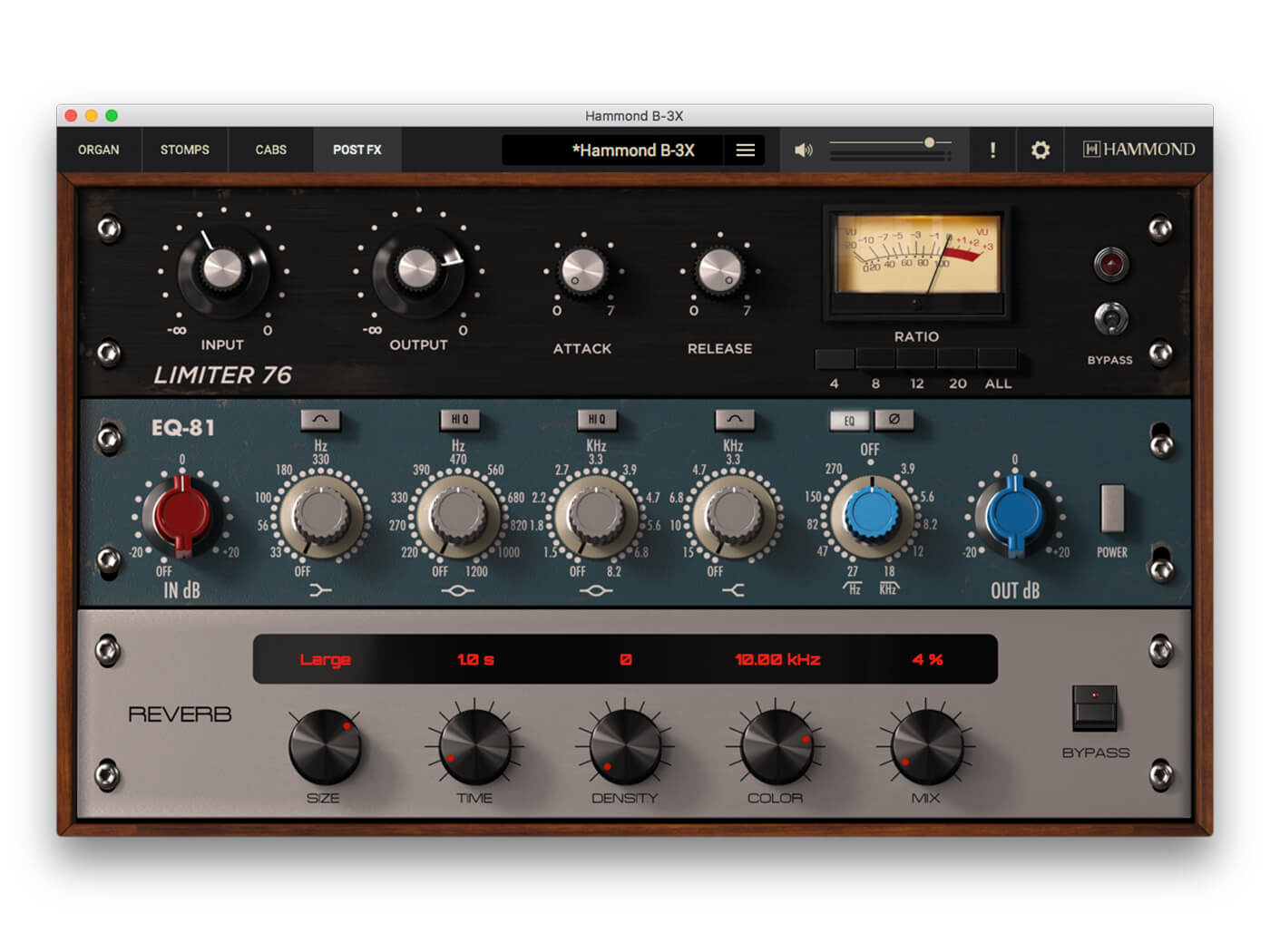 If you’re a genuine fan of the Hammond sound, we’d argue the B-3X is the closest you’ll get to a real instrument in virtual form. For more occasional users, though, the decision might be more difficult, not least because some form of Hammond Organ patch is often included as part of a sound library – like Vintage Organs, as part of Native Instruments’ Komplete, or Logic Pro X’s Vintage B3 Organ. Both these solutions sound good in the mix, but when played in isolation, the B-3X felt much closer to the sound of a real B3, especially on the all-important Whiter Shade of Pale rock organ patch where the B-3X really shines. 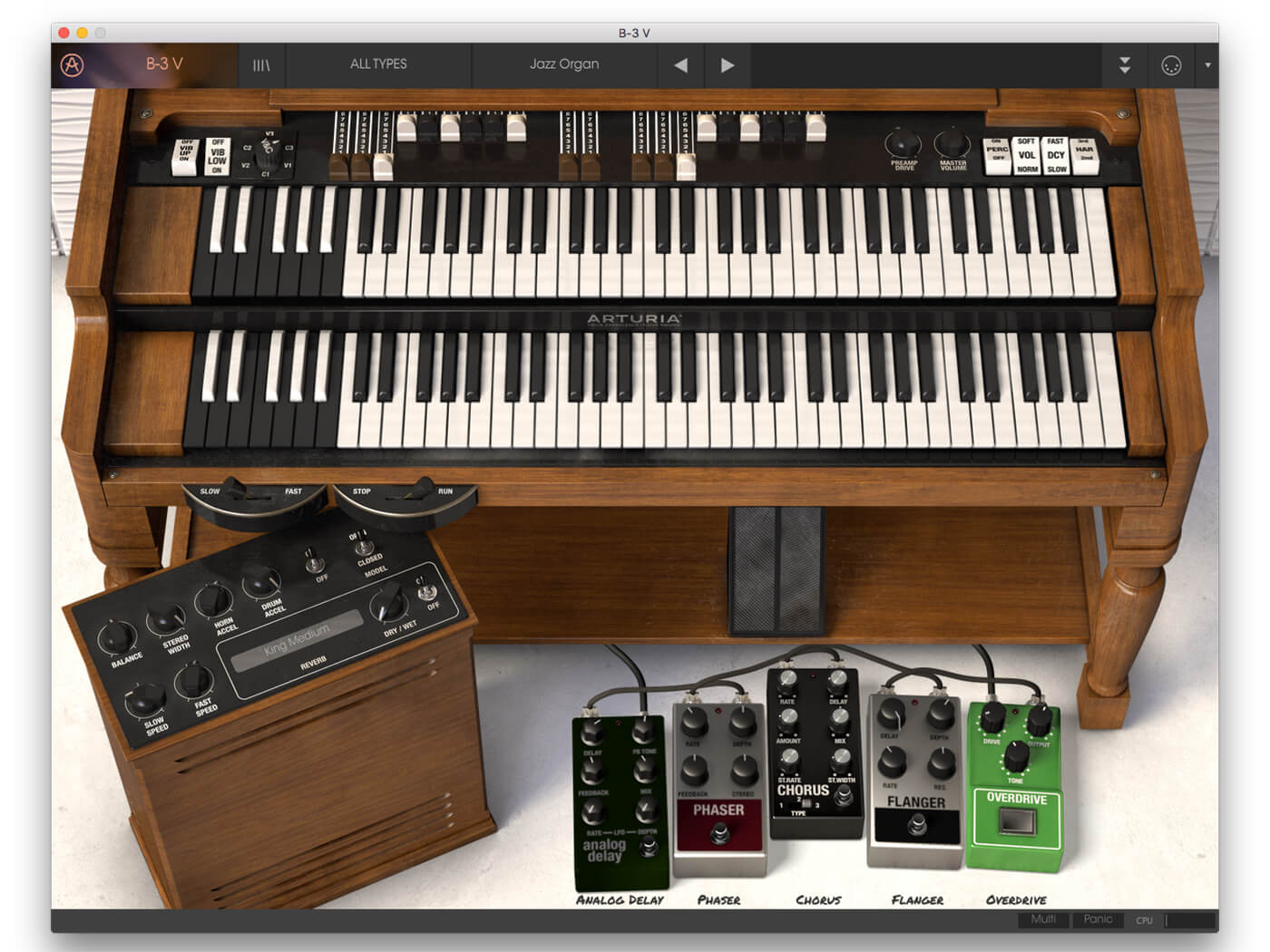 Arturia’s collection of modelled synths takes some beating, but its virtual Hammond lacks the authentic tones of the B3-X. Many of the presets seem slightly effects-heavy, and the interface is clearer on the B-3X. 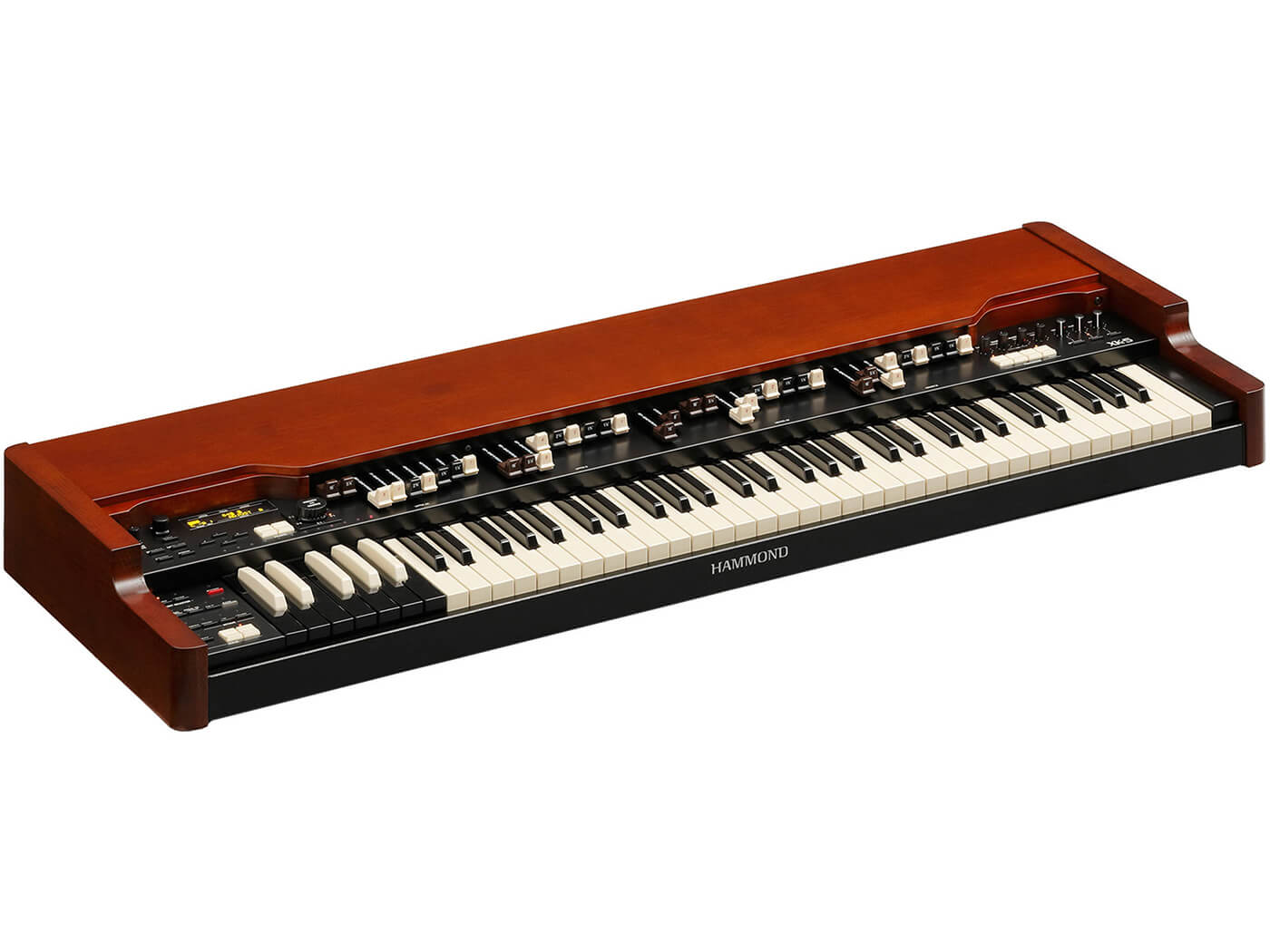 A players’ dream with a price to match, the XK5 is the finest drawbar organ you can buy. Some of the details go above and beyond the capabilities on the B-3X, and of course, you get the benefits of physical controls.