Heavyocity Aspire Modern Mallets review: The revamp that orchestral tuned percussion has been waiting for?

The round, earthy tones of the marimba and the crystalline beauty of the vibraphone have been media composers’ secret weapons for years. Does Heavyocity’s Aspire give these instruments a fresh lick of paint, or a dramatic reimagining? 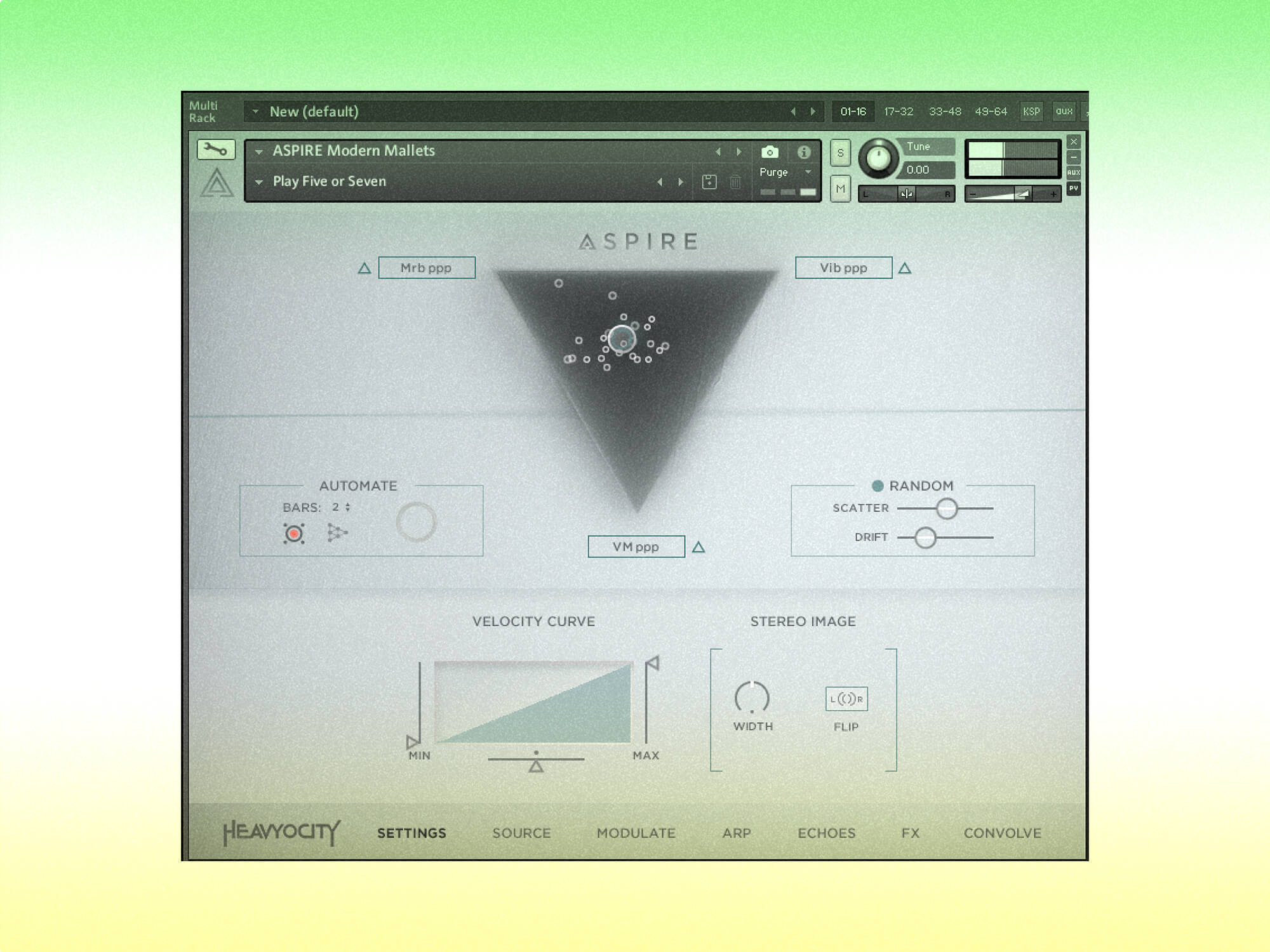 ⊕ Warm, open sound which has been intimately recorded
⊕ A range of tools available to produce animated, evolving sounds
⊕ A modern take on some well-used and popular instruments
⊕ Integrate well into a variety of musical genres

Hosted in Native Instruments’ Kontakt and Kontakt Player, Aspire offers a single NKI patch, with presets loaded from the drop-down menu at the top once you’ve double-clicked to load it. These provide a useful tour of Aspire’s approach to sound design, with Core Mallets patches offering variations on purer, less processed versions of the Marimba and Vibraphone instruments included. 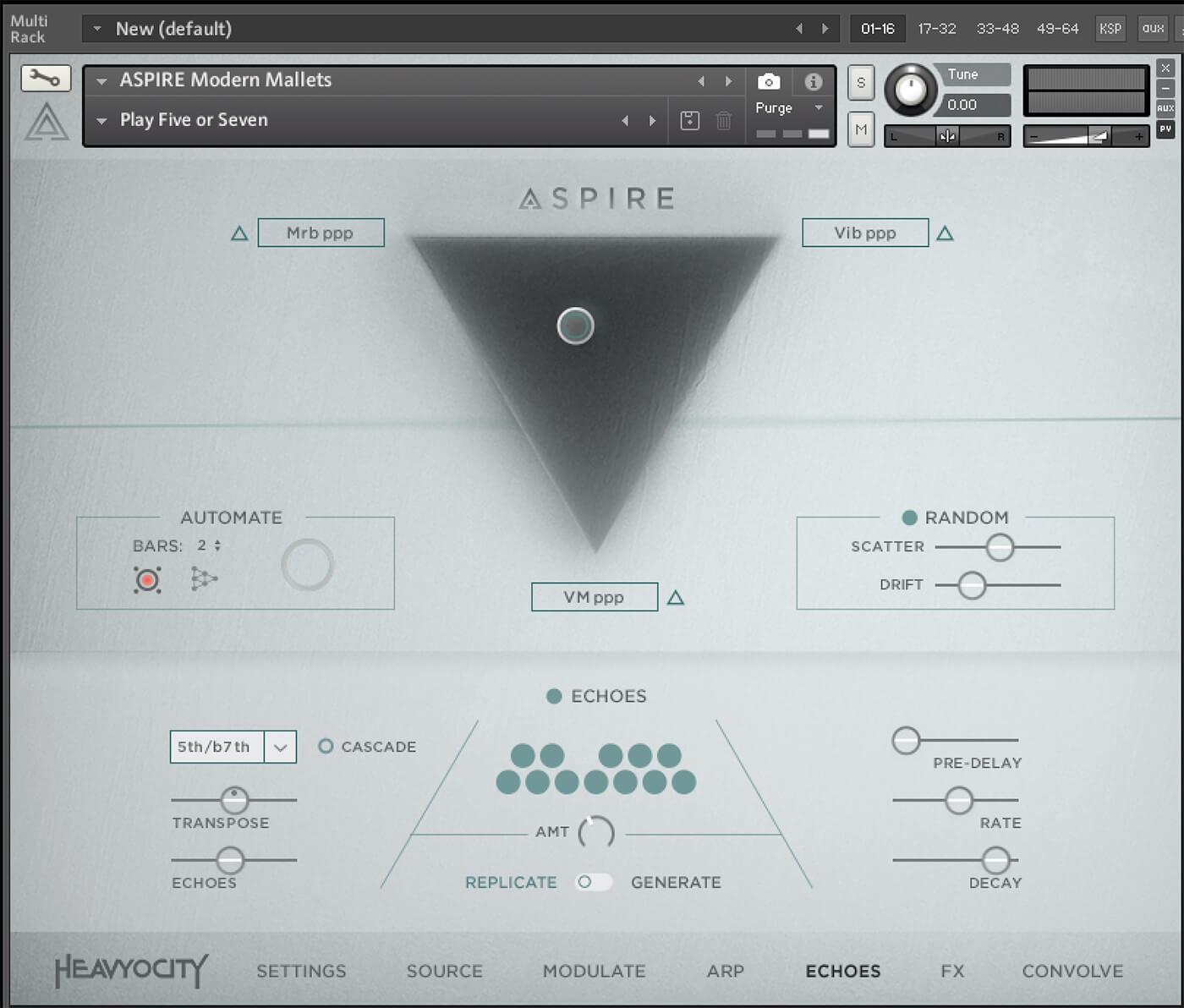 But alongside these presets are Extended, Rhythmic and Rhythmic Melodic patches that use more of Aspire’s processing tools to warp and develop this core material into a range of processed textures. These become either pad-like, with granular clouds of sustained, ephemeral warmth, or pointed, sequenced and rhythmic.

To achieve this range of textures, we first need to look at Aspire’s sound structure. It allows you to load three sources around the points of a triangle, with four sound choices available in each of Marimba, Vib(raphone) Long, Vib Muted and Sustained categories. For the purer instruments, these offer three microphone positions: Close, Room and Under(neath), and a ‘ppp’, super-quiet recording for increased intimacy.

The Sustained sounds offer Bowed playing techniques alongside some processed versions of re-sampled recordings, with chains including granular processing and cloud-like, shimmering reverbs.

Once you’ve chosen your three sources, you can tweak the parameters for each – attack and release times, volume, pan and Convolve effect send levels. Meanwhile, the Orb function within the central triangle lets you set the volume balance between sources, with a variety of options for modulating this to provide animated movement. There are LFO, envelope and velocity routing options and MIDI assignment of X and Y controllers, which you can assign yourself via MIDI Learn if you don’t like Heavyocity’s defaults.

The Arp page deploys Aspire’s arpeggiator, where you can program velocity offsets for up to 16 steps. You can set the playback rate of these, select how many octaves your sequence will trigger, introduce swing and choose the direction of travel. Plus, there’s a useful option, per note, to enable a Chord button, making all held notes to play together at that arpeggiator step.

The Echoes generator provides a unique take on delay techniques, with a series of steps triggered from a key press. These can either take the form of a traditional decaying echo or a more complex cascade of notes with pitch offsets, boasting some mesmerising results. 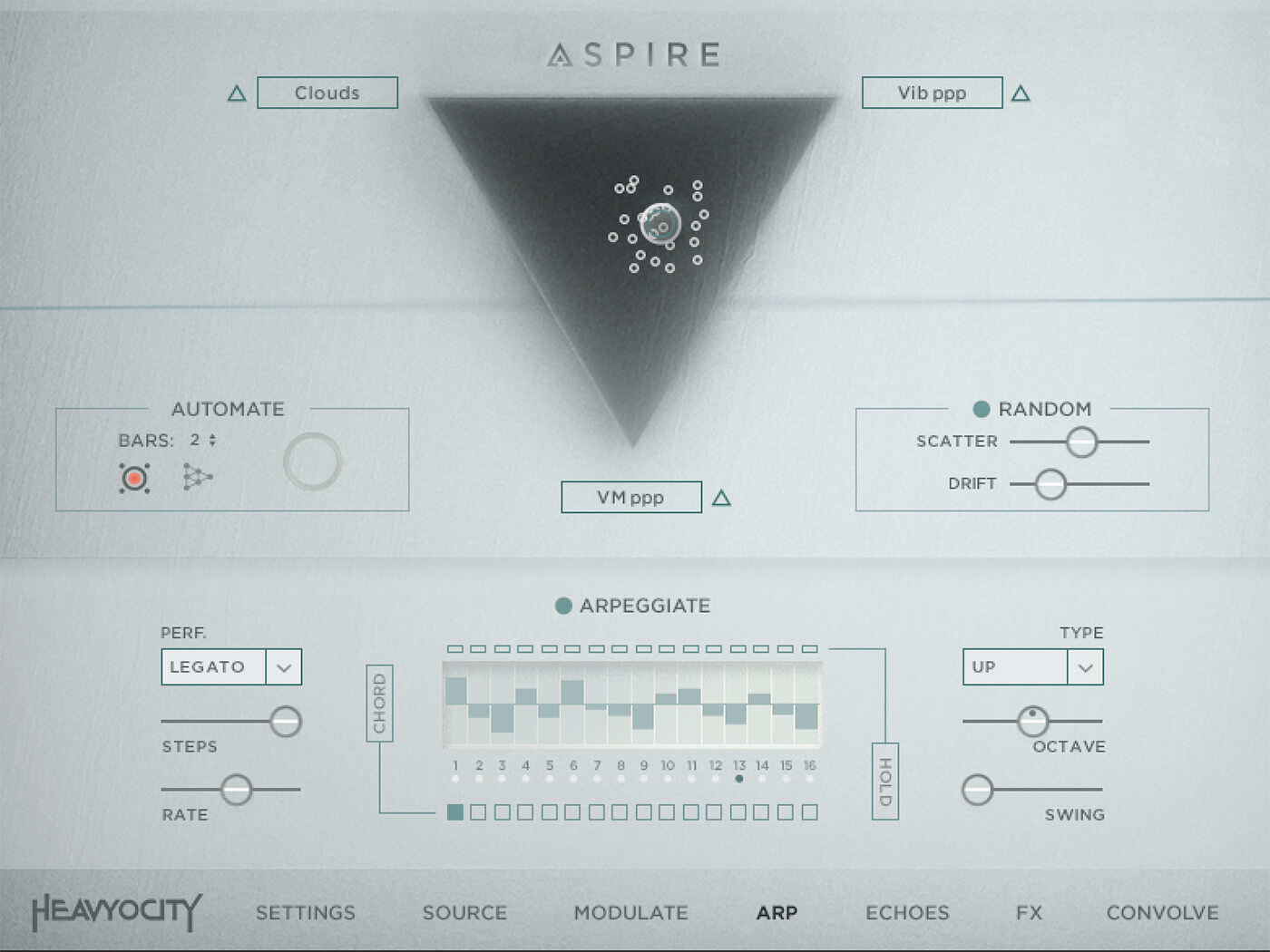 Four effects from a total of 12 modular options can be loaded into a patch, with dynamics, tone, space and saturation options aplenty. And lastly, the Convolve module lets you load an impulse response to let a signal pass through a convolved reverb, many of which add ghostly, rhythmic overtones to the loaded patch.

Aspire offers an inspiring, modern take on two stalwarts of the tuned percussion sound world. There are solid, regular patches for both instruments here, but things come alive via the many ways available to shift, warp, reverberate, animate, effect and personalise these beautifully recorded core sounds.