Last year’s release of the quickly lauded OB-E piqued the interest of Tom Oberheim to bring about this rare collaboration. 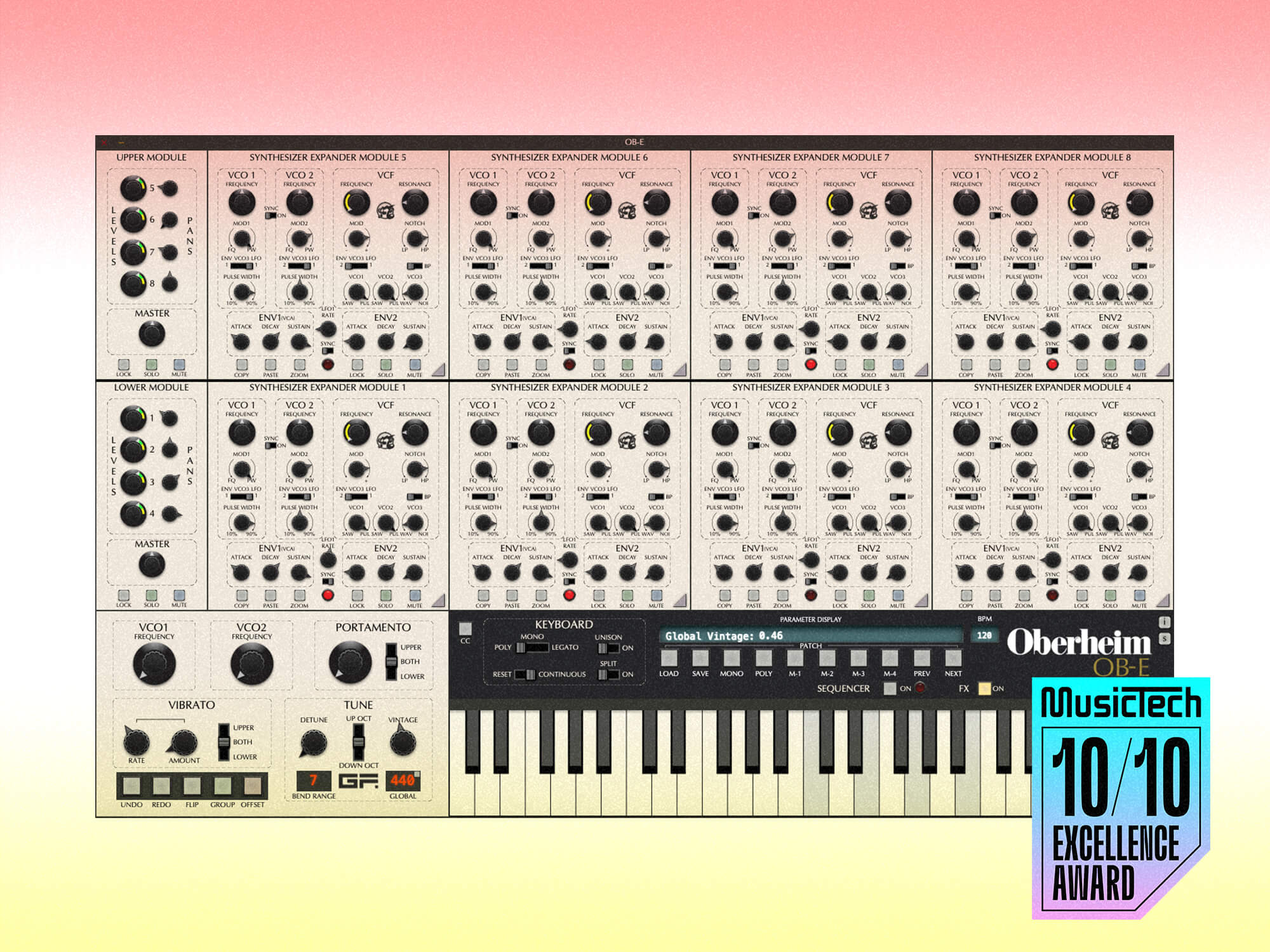 ⊖ Detune may be too subtle for some


The GForce OB-E softsynth impressed us into a 10/10 review back in May 2021, but now the father of the 8-Voice, Tom Oberheim, has collaborated on this updated version, is an 11/10 likely? The OB-E v2 is no overhaul; the software instrument has been tweaked sonically under the guidance of Tom Oberheim and former Oberheim developer Marcus Ryle, while a few new additions expand the sound and aid performance/programming.

On the UI front, the sequencer section now hosts a zoom function for ease of access, bringing it into line with the eight individually expandable SEMs. This is a feature-rich part of the OB-E that rightly deserves focus, and in turn this simple enhancement aids the new the Drum Mode.

I can hear drums

Drum Mode can be accessed either via a keyboard shortcut or by loading a drum preset. In this mode, each SEM is linked to a key from C2 to G2, as indicated by a graphic above that key range.

The SEMs are primed for creating percussive sounds, from kicks and snares to cymbals and gongs, thanks to their substantial set of synthesis tools. There may only be key assignment for SEMs, but it turns the 8-Voice synth into an eight-piece kit. A set of twelve Drum Mode presets are ready to kick things off, particularly for those unfamiliar with synth drum programming.

To the left of the keyboard are the two controls most directly attributable to the GForce/Oberheim collaboration: Detune and Vintage. The former has been toned down to provide a more subtle detuning across the 8-Voice. It still introduces depth to unison patches and polyphonic chords, but for wilder effects the individual SEMs can be teased apart with their VCOs, the lower global frequency knobs or the Group/Offset switches.

Detune wasn’t softened in isolation; it was adjusted to work in conjunction with the new Vintage control. A selection of parameters across the SEMs are pushed and pulled as the Vintage knob is wound up. The resulting shifts in tunings, filter behaviours and envelope generator timings temper the mechanical edges of the synth, with more transient or percussive sounds displaying the most overt shifts.

It pays to turn Vintage all the way clockwise to hear what’s possible and work back to where coherence and unpredictability are best balanced. The effect is far more complex than a simple detune, and in combination these are essential sound design flavourings, especially for the new Drum Mode.

The OB-E’s worthy but lonely delay effect has been joined by a new reverb engine. As with the delay, the reverb can be applied to either or both of the upper and lower rows of SEMs. There are five presets for the seven parameters but fine tuning the effect is worth it for creating a well-matched reverb.

Short room-like spaces add that final dimension to chord hits and sequenced patches, while truly massive reverbs can be carved out to send the OB-E’s sumptuous pad abilities into deep space.

Wave of the wand

For existing OB-E users, the v2 update is free. For everyone else, the addition of the master’s magic renders this a must-have synth for computer music-makers. OB-E v2 is a magnificent instrument that conjures up delicious sounds across a broad sonic spectrum, much like the mighty 8-Voice. The price reflects this breadth, depth and quality of sound. And, if you’re quick, you can get this supernatural at its introductory price.