Genki Instruments Cosmos review: A unique synth with potential – but not at full price

Raw and lively sounding oscillators, an innovative GUI and quick workflow are let down by a lack of useful features and a handful of bugs. 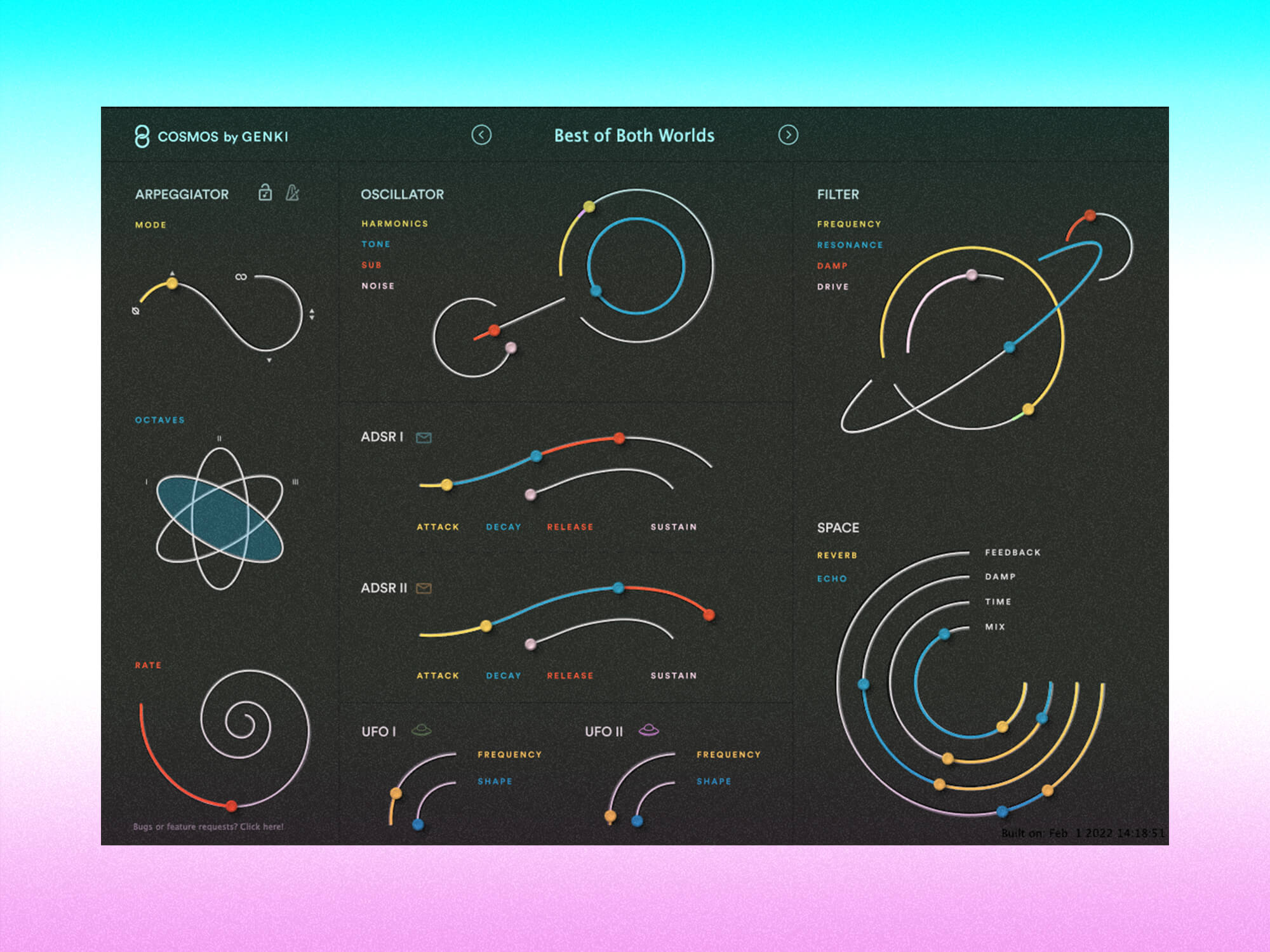 
To say the synth market is overcrowded is an understatement. It takes something quite unique and special to stand out from the crowd. Genki Instruments is best known for its innovative Wave MIDI ring, but the Icelandic company has now turned its attention to soft synths with the release of Cosmos. This eye-catching synth features all controls on one screen and is intended to be an inspirational instrument for sonic exploration and creating happy accidents. It can sound rich and surprisingly complex, but it’s arguably overpriced for its limited feature set.

There’s no denying that Cosmos is a visually intriguing instrument – its one-screen GUI is unlike anything we’ve seen before. At its core, is an eight-voice synth with virtual analogue oscillators, a virtual analogue filter, two LFOs (lovingly labelled UFOs), two envelopes, an arpeggiator, and reverb and delay. The GUI is fixed-size and, although the controls could be smaller, it’s a spacious surface to explore.

There are no virtual knobs, just sliders of various shapes with coloured dots for adjusting parameters, making the whole interface look like an astral chart. All the dots and lines are colour-coded, making it fairly easy to get to grips with, which is useful as there’s (currently) no manual to refer to. Truthfully, Cosmos feels like an instrument that’s begging to be played on a tablet rather than a desktop. But only time will tell whether this can be ported over to touchscreen devices.

Despite being built for exploration and effortless use on the surface, there are certain features here that need more explanation. Envelope 1 is hardwired to the amp envelope, although it can also be used to modulate any other parameter. The Harmonics slider acts as the main oscillator pitch but it’s a sliding scale, so if you’re looking to craft a patch that works in key, then you’ll have to tune it by ear.

Perhaps the most interesting and powerful control for sound shaping is the Tone slider, which seems to morph through a variety of clean and complex-sounding wave shapes via sync and FM. There’s also a fixed sub-oscillator and a noise generator for adding additional depth. With just these four controls, you can create a wide palette of sounds, and the analogue modelled oscillators sound surprisingly rich. You can get some fat-sounding oscillator clashing going on with micro-adjustments providing a satisfying shift in pulsating sound. 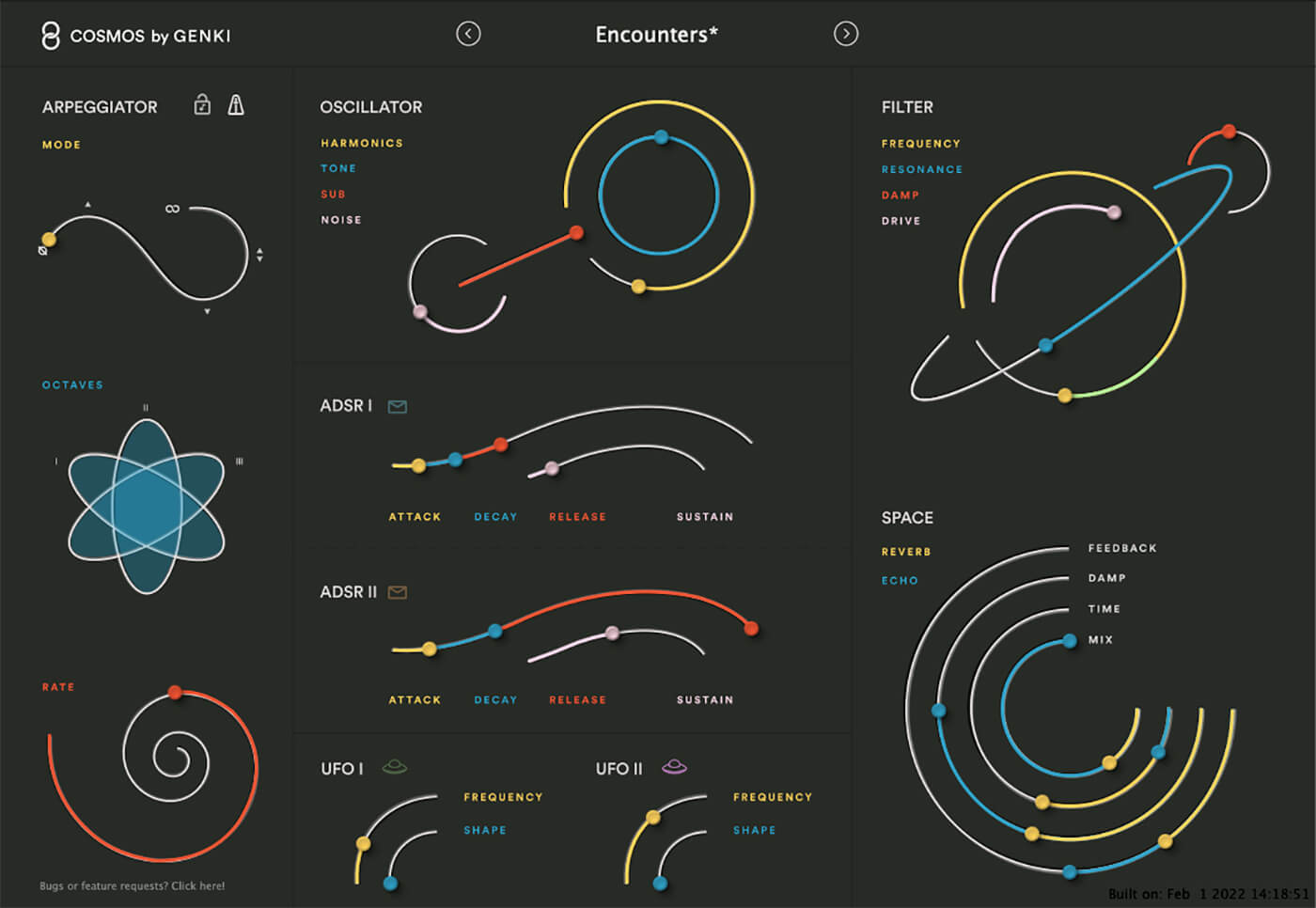 There’s a bit of an issue with volume here, though. Playing the raw oscillator and the sub-oscillator together can result in a signal that hits 14.5dB above the 0dB ceiling. That might not seem so bad, but there’s no volume control to speak of, so you’ll have to do any gain staging outside of the plug-in to avoid clipping. The lack of volume control also creates an issue with the inconsistent preset levels. This is partly due to the modelled filter, which dramatically loses body as soon as you raise the resonance.

Other controls include Drive and Damp, which also reduce the overall volume. The filter sounds fairly smooth until you turn up the Damp control, at which point the resonance becomes much more pronounced. It’s a bit of an unusual system, but it allows a fair bit of variation, from smooth tonal control to more nasal, Korg MS-20-esque sounds.

Cosmos’ arpeggiator is simple but effective. It has four modes (up, down, up and down, and as played), three octave settings, and a rate dial, plus sync to tempo and hold buttons. There are also reverb and echo effects that share the same four sliders controlling Mix, Time, Damp and Feedback, which is no real bother to navigate.

The reverb has a unique and colourful sound, with a pronounced pre-delay and resonant, swelling tail. These effects definitely give Cosmos its own voice and can be heard across the somewhat limited number of 37 included presets. These are a mixed bunch, ranging from basic sounding plucks to more complex and unusual celestial arps and pads that make extensive use of the modulation options.

The two ADSR envelopes and two LFOs each have an icon next to it that highlights which parameters are being modulated when you hover the mouse over them. Simply click to set the source into assignment mode, then click, hold and drag on the dot that you want to modulate. It’s an effective system and colour coding goes a long way to making things clear. Although, as you’re limited to bipolar modulation on each parameter, you may need to make further adjustments to the original position.

The strength in Cosmos lies in everything being easily visible on one page, so it invites you to try different modulations. Some of the wildest sounds come from modulating the effects themselves, like using the UFO to sweep the delay time and create moving, cascading rhythms.

And that, in a nutshell, is the whole synth. There are no further settings, apart from the ability to save, import, export and create new presets. Unfortunately, it would appear that you can’t easily MIDI map any of the controls from the plug-in, or record in GUI movements as automation in Logic. Although, you can draw in automation in your DAW for some parameters. That said, we get no response from drawing in resonance automation, and in Ableton Live it’s impossible to select resonance as an automatable parameter.

Our Logic session presents what appears to be a massive list of additional hidden parameters for automation, suggesting that there’s more going on under the hood. Frustratingly, it also makes it hard to find what you want.

We also found that some of the presets have hung notes, and we were unable to modulate the arpeggiator rate, despite the GUI visually showing it was happening. Plus, we experienced a crash during use, which can easily lead to a breakdown in creativity.

Cosmos is a lovely sounding, characterful synth with some charm and an inviting interface. If you can snap it up quickly at 50 per cent off, then it could be a solid addition to your sound design arsenal. However, in its current state, it’s hard to recommend at the full price, especially when compared to other soft synths on the market.

Although the limited feature set makes it inviting for newcomers and allows for quick results, it’s lacking certain useful features such as volume control, mono mode, syncable delay, easy automation and MIDI controllable dials. Genki Instruments should be applauded for experimenting in a market full of copycats though, and we look forward to seeing how this synth develops.