Can this promising movie trailer sound design instrument cover all your riser, transition and build-up needs? 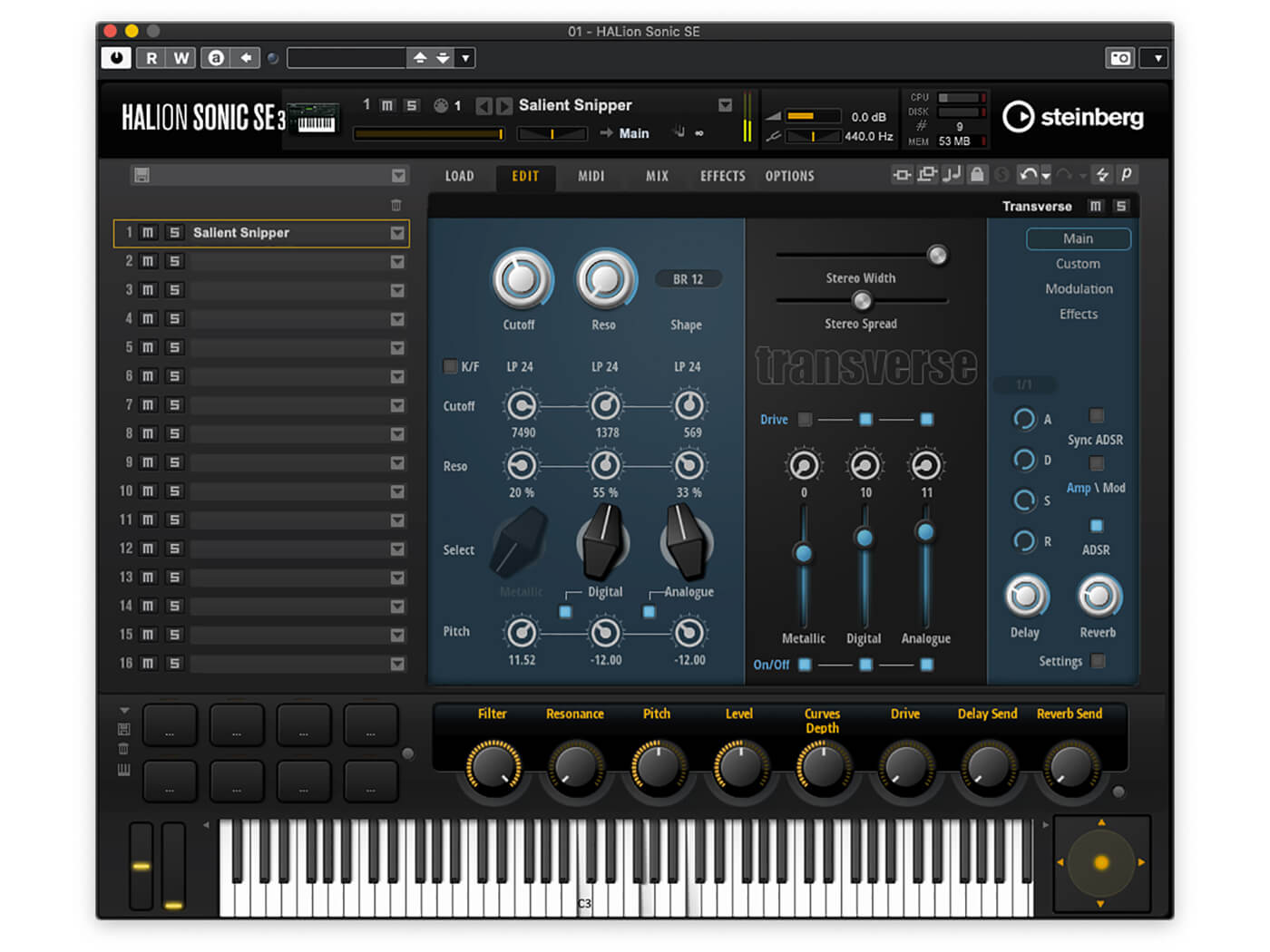 The interplay between repeating rhythmic and melodic patterns lies at the heart of many forms of contemporary electronic music. When using them, the biggest skill lies in ensuring these repetitive patterns don’t become boring. To this end, many styles pepper the music with various embellishments such as risers and transition, but creating these from scratch can be time-consuming. Moreover, the results are often so tightly sculpted to each track that they don’t translate well to other projects.

Transverse, a new instrument by South African developer dvCompTools, aims to address this problem. The name is a portmanteau of “transition” and “reverse” in a nod to a couple of the tasks the instrument is designed to deal with, but it’s capable of a good deal more, too: risers, impacts, swells, complex evolving pads, and rhythmic patterns and grooves are all catered for. The instrument is built for Steinberg’s HALion platform, so it ships with the HALion Sonic SE 3 plug-in (VST2, VST3, AU, AAX). You can, of course, load Transverse into full versions of HALion or HALion Sonic, too, should you so desire.

Transverse builds its sound from three synthesis layers, descriptively named Metallic, Digital and Analogue. Each layer’s oscillator has two modes, the first being a noise mode in which the oscillator can choose from 12 noise profiles. The selection of profiles is different for each layer, with each set of 12 chosen to match its layer’s intended character. The alternate mode of the Digital and Analogue layers allows them to operate more like conventional waveform oscillators. Each layer’s selection of 12 waveforms is made to match the layer’s intended character.

The Metallic layer also has a second mode that turns it into a sample and granular synthesis engine. You can drag in your own samples or load any of the over 80 included as stock. Unfortunately, there is no way to browse the included samples, and you can only step back-and-forth through the collection, which is rather cumbersome. Once a sample is loaded, though, you can manipulate its start, end and loop points, and apply time-stretching and formant shifting. Alternatively, you can switch to the granular mode and then define the size, speed, position, etc. of the granular sample. You can use this to create endless holds on samples or go granular for foreboding risers and atmospheres.

Each layer has an independent filter with a choice of ten different modes, and there’s also a master filter, with a choice of eight modes that affect the overall sound. The layers are then mixed using faders in the centre of the interface’s main panel, where you can also apply per-layer overdrive and modify the stereo spread of the layers.

The main panel is rounded off with a section where you can define a simple ADSR amplitude envelope. This can either operate with a linear seconds-and-millisecond timebase, or use a musical note length timebase synced to your DAW. The latter mode makes this a flexible tool when working between multiple projects. What’s also particularly interesting here is that you can switch this envelope generator from ADSR to a Reverse mode, which is designed for long reverse fade-ups. Again, the duration can be synced to your DAW and expressed in note length.

Transverse also packs a second, more unusual envelope generator: the Curves Envelope. NI Massive users will be familiar with this concept. It consists of up to 16 segments, each containing a unique envelope shape – ramps, pulses, constants, and so on. You choose shapes from a palette of 14 prototypes; once placed in a segment, you can effortlessly modify shape amplitudes by dragging. Like the other envelopes, the Curves Envelope can operate in musical duration (synced to your DAW) or in seconds and milliseconds.

The Curves Envelope can drive the synth’s amp, filter, and pitch. The amount of envelope to send to these parameters is controlled globally via a set of three dials. Still, you can separately control how strongly the envelope will affect each layer, too, from -100% to 100%. This can be somewhat fiddly and confusing at first, but it does provide sufficient control once you become familiar with it.

Also confusing is Transverse’s LFO system. The instrument presents two LFO sources, LFO1 and LFO2, but closer inspection reveals that each layer defines its own LFO waveforms and rates. In other words, there are six LFOs in total. Nevertheless, when routing other modulation sources to the LFOs, you can only address LFO1 or LFO2, not the per-layer LFO parameters.

A comprehensive manual could iron out these confusions, but the existing one isn’t the most enlightening of documents and doesn’t help very much. Thankfully, not at all confusing is Transverse’s X-Y pad/joystick mapping, which lets you direct X-Y controller inputs to as many as four modulation destinations per axis.

If digging into the depths of how a synth works isn’t your thing, then Transverse is still worth a look. It comes with a healthy bank of nearly 270 patches, many of which are of the sort that can inspire new musical ideas the moment you hear them. It’s also easy to modify a patch using the various controls and views, even if you’re not entirely sure what’s going on under the surface.

If you do want to dig deeper, then you’ll find at first that Transverse isn’t the most straightforward synth to understand, but the effort is paid back when the pennies begin to drop because, at heart, this is a very well-conceived sonic tool.

The Curves Envelope is worthy of particular praise, making it wildly easy to create exciting rhythmic patterns and movement within a sound. When it comes to creating rises and swells, the Reverse envelope generator is an inspired idea, too. If you change your project’s tempo or wish to use the same sounds elsewhere, it’s no problem because, unlike with regular samples, everything remains editable and synced to your DAW.