The LA-based maker’s latest library forgoes trendy overblown trumpets and horns in favour of more nuanced, melodious and, yes, sonorous samples. But is it cut out to be top brass? 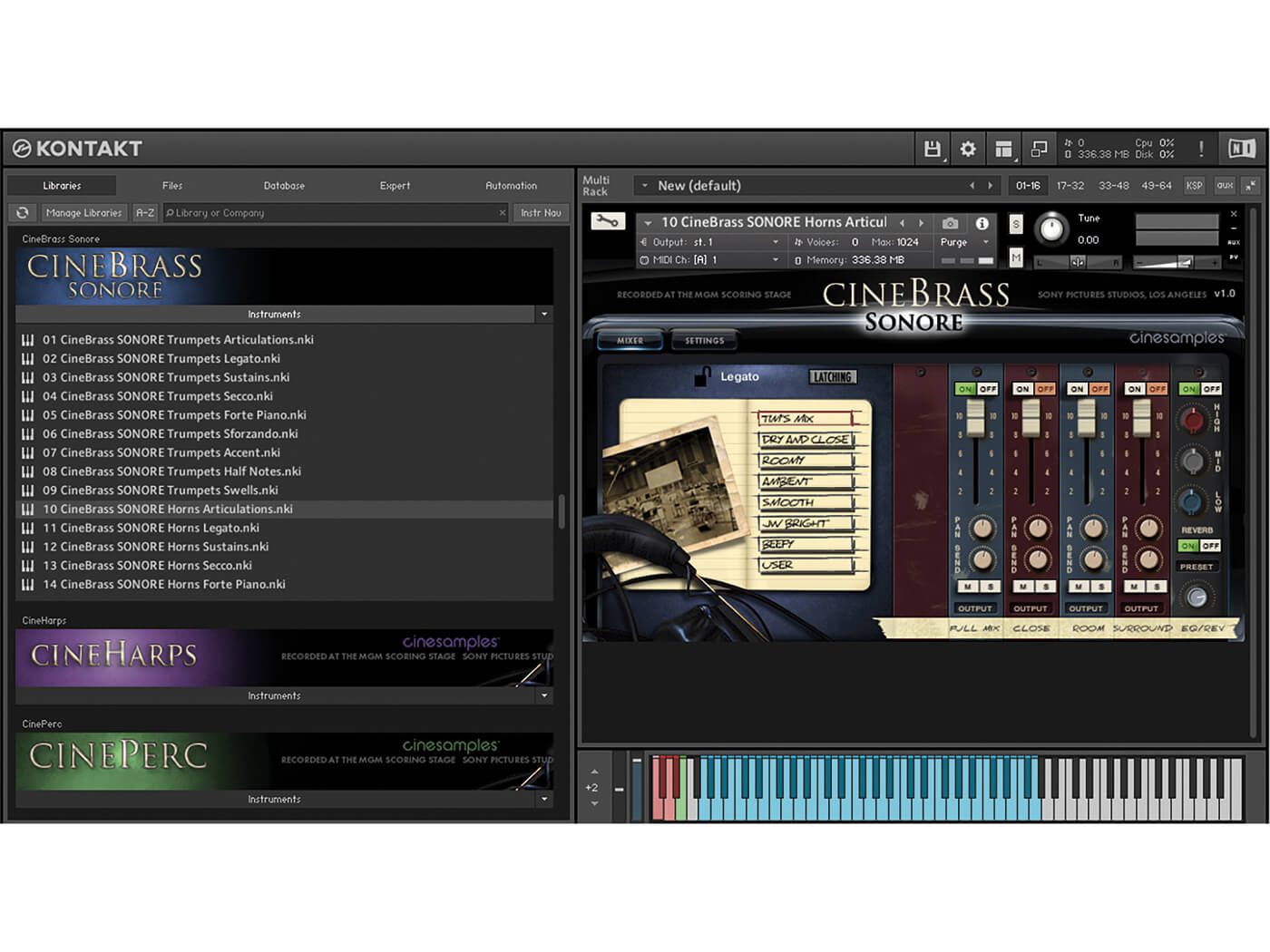 When it comes to brass sample libraries, the market seems to have been operating via a kind of big-is-beautiful rationale for years now, reflective perhaps of the trends that have permeated cinematic scores over the past 10 years or so. Thunderous and overblown low-pitched drones, commonly known as ‘braaams’, have embedded themselves into many a big-budget film and video game action sequence.

They may be ubiquitous but braaams wouldn’t have caught on if they weren’t effective. There is an increasing sense, however, that the sands are shifting, with many composers and producers once again turning to more considered and reflective sounds, rather than those of the room-quaking variety. It’s this return to the more subtle ends of the spectrum that Cinesamples’ CineBrass Sonore seems set to capitalise on.

The English definition of the French word ‘sonore’ is ‘resonant sound, with a rich tone’. Dynamically speaking, this translates to something in the middle of the dynamic range but it’s important to understand the ultimate implication of timbre.

When played loud, brass instruments can sound raspy, riveting, even exhilarating. Depending on context, though, they can also sound totally unpalatable. CineBrass Sonore aims to occupy the middle ground of that dynamic range with warm and pleasant textures, extending from what might be regarded as mezzopiano (moderately quiet) to forte (loud) but always with a welcome warmth and not bombastically bright. 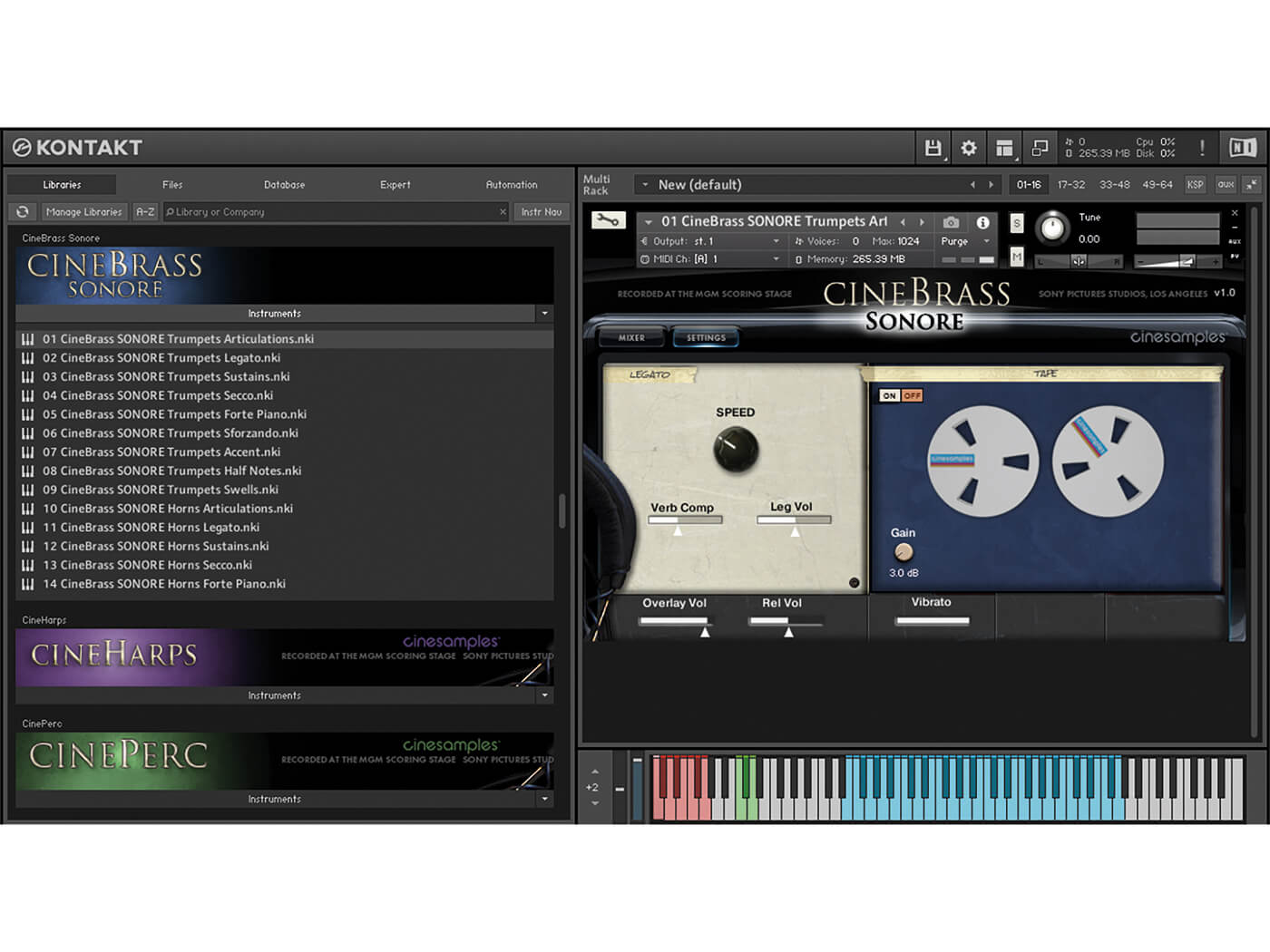 CineBrass Sonore focuses on upper-brass instruments, and it’s the trumpets samples that provide the most sample content here, with a wide range of articulations and an even wider note register. The samples extend from the lowest note in the trumpet’s range – an E below middle C – right up to a top G, more than three octaves higher. That’s a significant range, and testimony to the quality of the players used to capture these samples.

Trumpet sample deployment is split in two, which allows you to load a single player and enjoy the flexibility of a solo performance, or load up to a further three players and thicken the ensemble to simulate a full trumpet section, all while retaining independent control of both elements.

All of the articulations are available as single patches but I choose to use the multiple-patch incarnation, which offers keyswitching in the lower part of the keyboard. The legato articulation is beautiful, with a subtlety and warmth even at the upper end of its dynamic range, ideal for those Aaron Copland-style lead roles. It sounds a little shrill at the top of the register but trumpets generally do. The overall veracity of the sample, however, is superb. It’s a little less believable during fast semi-quaver runs but anything modest and of moderate tempo sounds fantastic, with no ballooning of notes.

With CineBrass Sonore, Cinesamples allows you to control dynamics via MIDI CC1, also known as the modulation wheel, but that’s not the only trick it uses to strengthen its samples. While all controls are user-assignable within Kontakt, it’s also possible to control vibrato but, in a splendid showcase of conceptual thinking from Cinesamples, only on the first player. This manifests itself beautifully, allowing you to blend in subtle and slowly undulating vibrato, which ties in seamlessly with the library’s remit at the timbral level, designed to support those soaring lead lines floating effortlessly over the top. Since you can independently control the first player and section members, this can be fine-tuned to taste.

There’s a prepared palette of mic settings too, which can be altered – or you can create balance settings from scratch. Expect the usual mix of close and ambient mic’ing, all prepared within the confines of the MGM Scoring stage, offering a fabulous combination of sound up front and an acoustic that’s thankfully not over-inflated.

The articulations feature options beyond the usual sustains. The forte piano offers more of a heavy accent with diminuendo (a sudden decrease in loudness), while the Swells patch is powerful, akin to the recognisable brass colours heard in feature films such as The Matrix. There are plenty of short and detached articulations too, which add up to a useful compendium of colours that should be applicable in most modest settings. 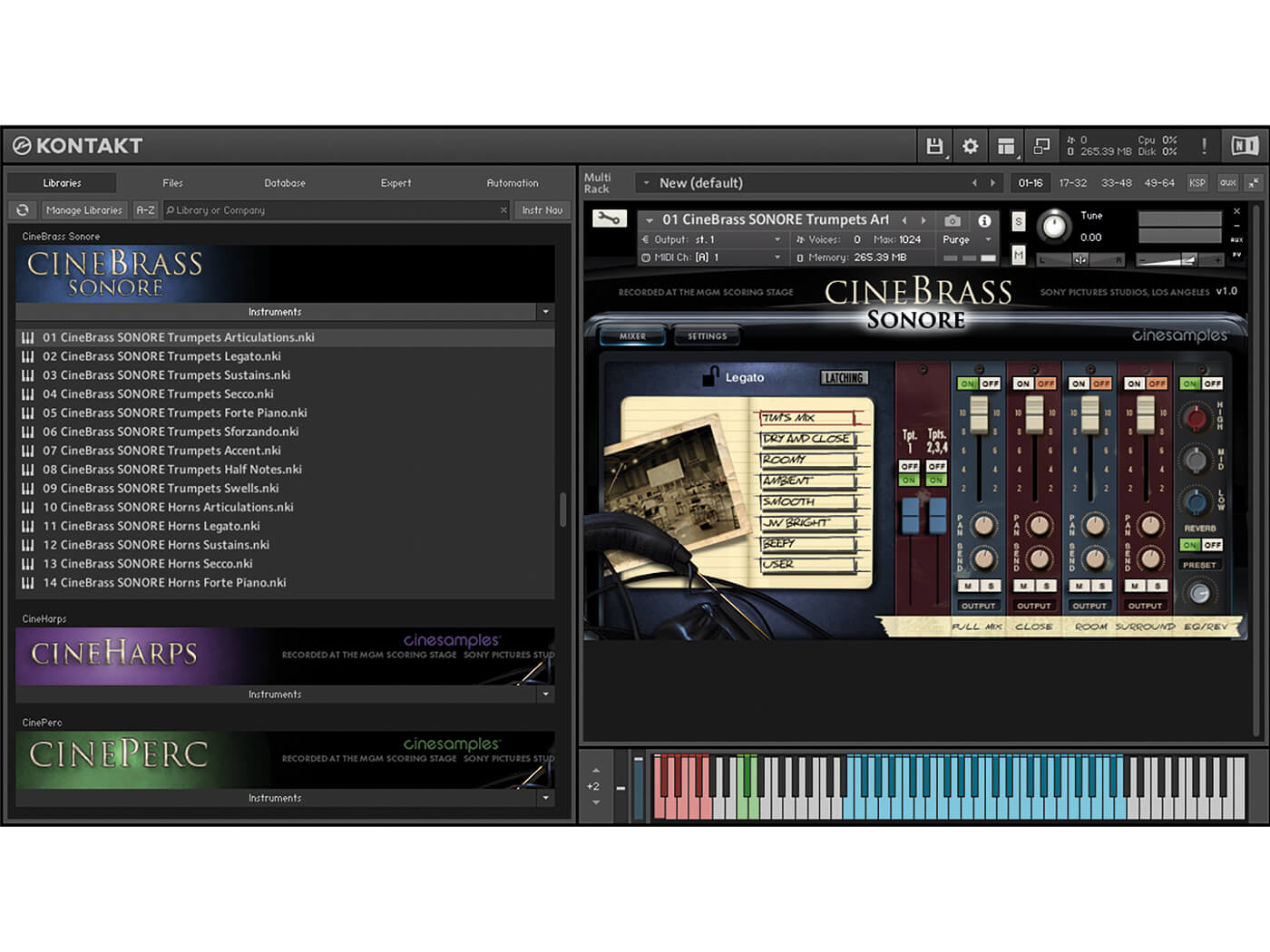 The French horns feature less choice in articulation and colour than the trumpets. The legato, however, is stunningly effective, especially in the lower dynamic range. Unlike the trumpet patching, with the French horn samples you can’t control the number of players or vibrato but their sound is terribly endearing. They suffer from a slight delay in playing but, in fairness, this is often the case with horn libraries, which require a bit of DAW-based nudging in order to settle on the correct timing placements within a bar. The additional legwork is worth it, though, as these samples sound rich and sonorous. The forte piano articulation is similarly slow in the attack phase but some similar tweaking will sort that out and have it sounding spectacular.

Cinesamples has gone to the trouble of providing further volume control of elements such as the separated legato samples and end tails, which is useful trait. It’s easy to move from a ludicrous setting at full volume to something more nuanced and tasteful, allowing for plenty of compromise. There’s also a nice tape-saturation effect on the master out, which can be dialled in subtly or overdone to the point of distortion.

Cinesamples has made good ground with this library, setting out its stall with a firm ideal and supplying the content you want in the areas you’ll need it. The horns feel like the weaker of the two sections, in the sense that they feature less content and require more work from you. But that’s all part of the fun of the mock-up orchestral fair.

This isn’t a vast library, either in content or sonic make-up, but, by that token, it isn’t bloated either. What it is is an affordable package that provides real value through authentic sounds with just the right amount of control.

This library is designed to provide a nuanced dynamic structure at odds with the exaggerated feel that has permeated popular scores over the past decade. Its instrumentation can still play up to a healthy forte but it’s not going to blast your head off. Make no mistake, this is its greatest strength. What it lacks in raw power it makes up for with a sumptuous set of samples capable of less burly and more musical performances.

This is not a complete brass section, however, instead focusing on upper-brass instruments trumpets and horns, with no additions or doubling of instrumentation. With CineBrass Sonore, you’ll have plenty of sounds for stirring melodic use, either in the upper trumpet note range or the middle register, where horns can supply sensational melodies and countermelodies. 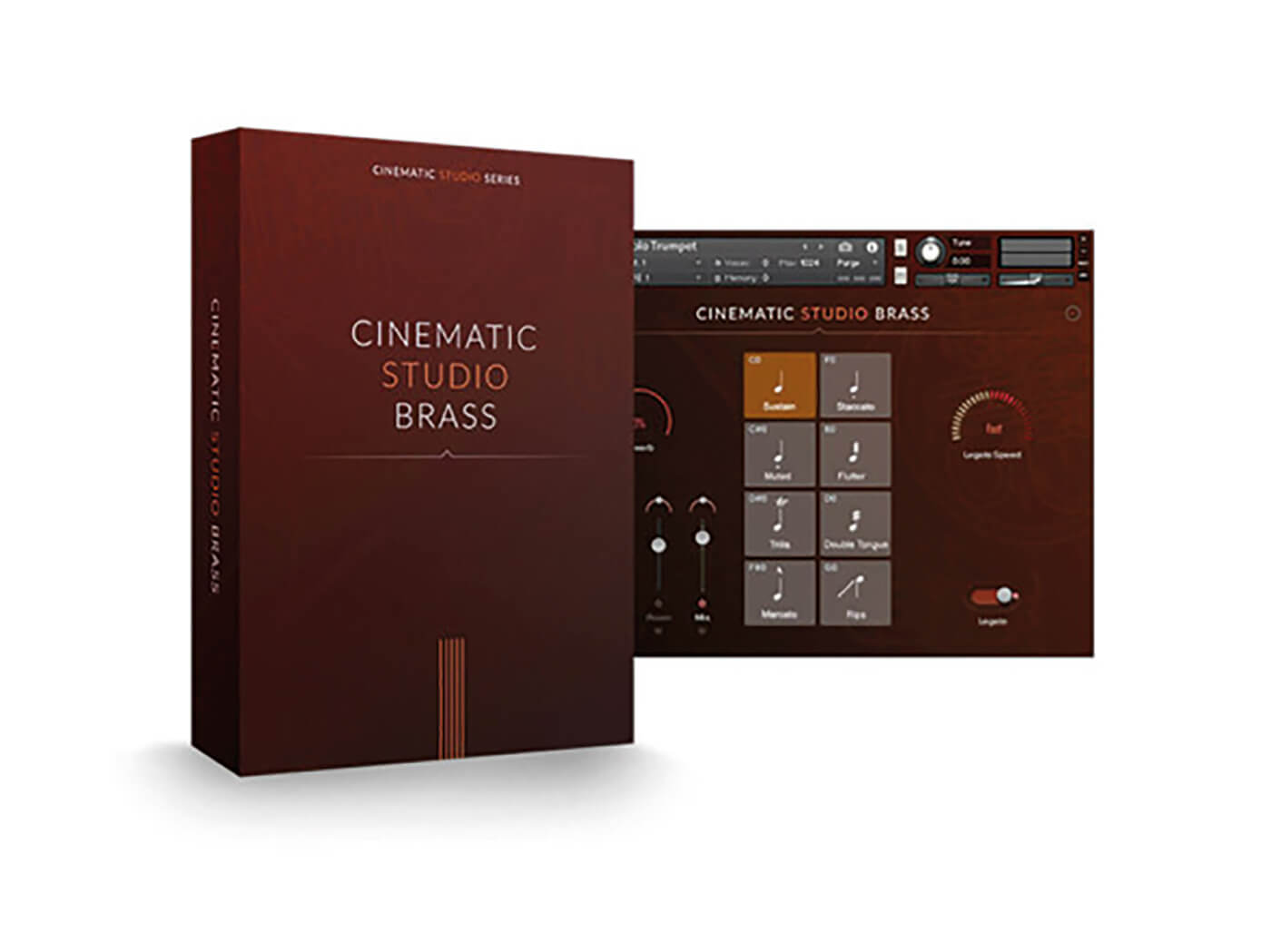 This more expensive alternative contains samples representing the entire brass family, from trumpet to tuba. Also recorded on a soundstage, it’s an excellent package that performs at all dynamics. 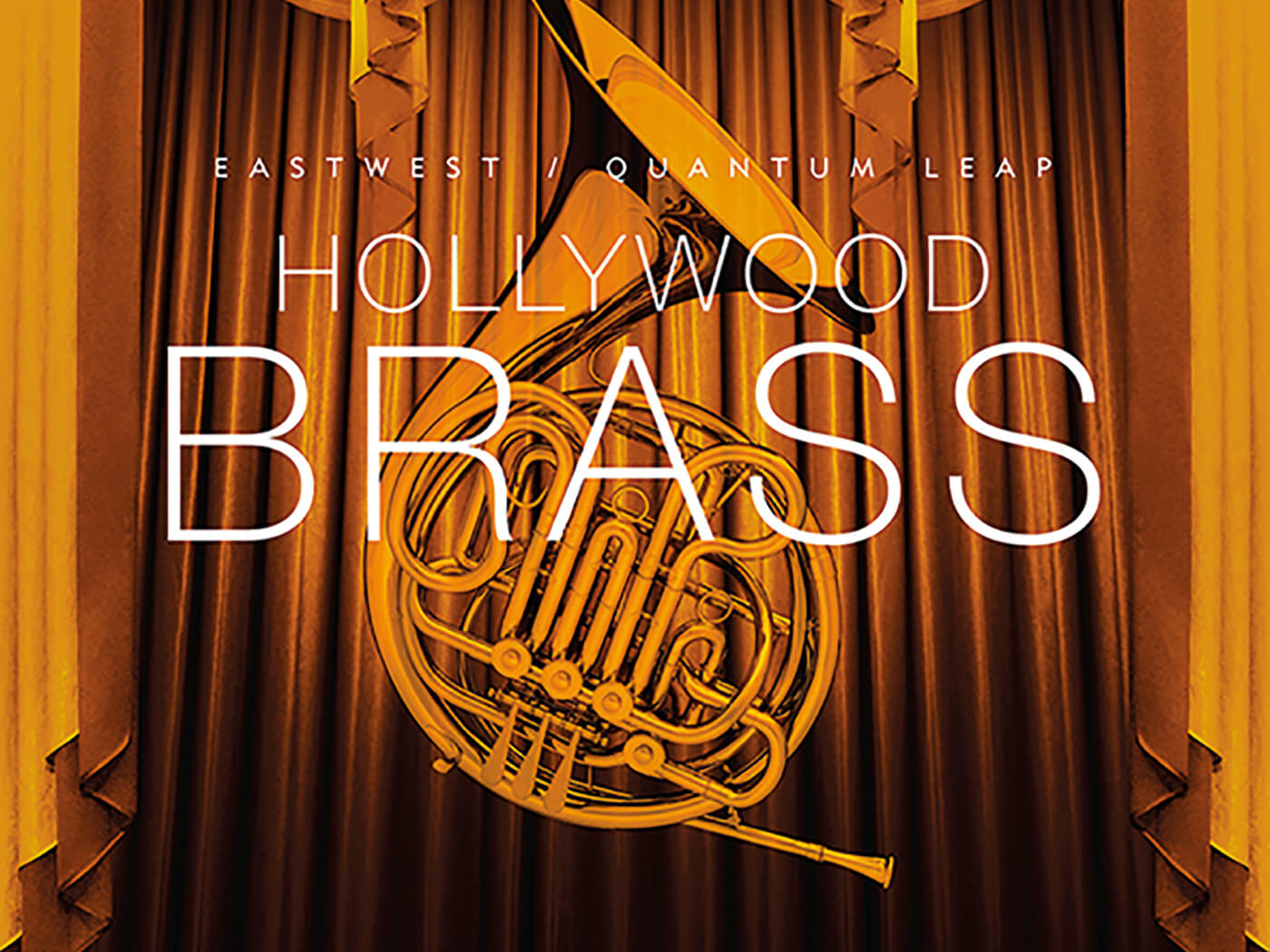 Also recorded on a scoring stage and representing the whole brass department, this library is packed with content and is open to rent via the equally comprehensive ComposerCloud option.