The sound and feel of the Memorymoog with some extras thrown in for good measure. 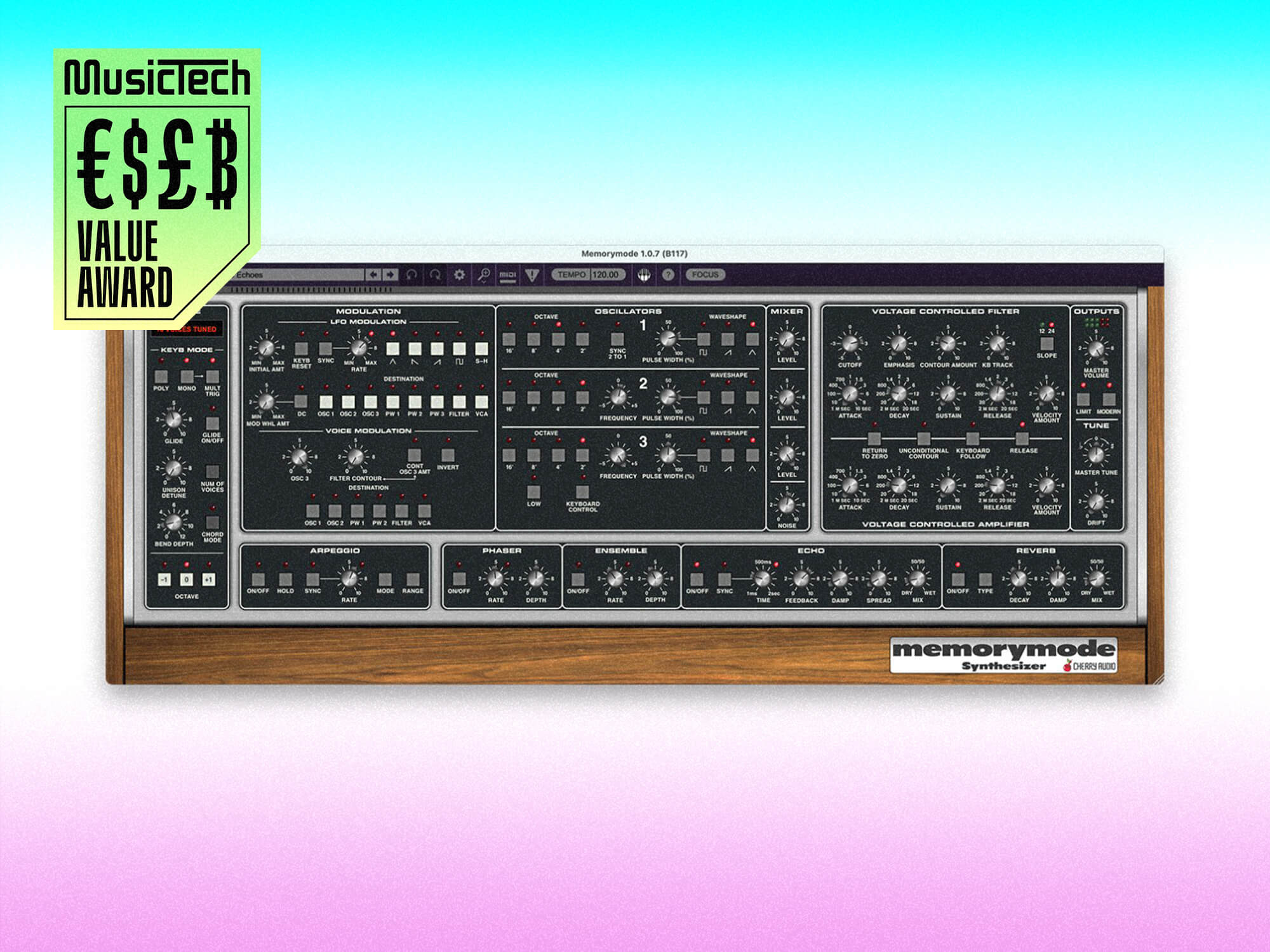 ⊖ Some presets are a bit standard-sounding

An affordable and approachable virtual Memorymoog with handy extra features that covers a lot of sonic territory.

Cherry Audio is a US-based collective of programmers, sound designers and synth enthusiasts that has been steadily building up its stable of vintage synth recreations. The latest is Memorymode, a software version of the classic and now ultra-rare Memorymoog released in 1982.

This software version is modelled on a hardware unit originally owned by Chick Corea. As is usually the case, it also adds some extra features that weren’t available on the hardware. 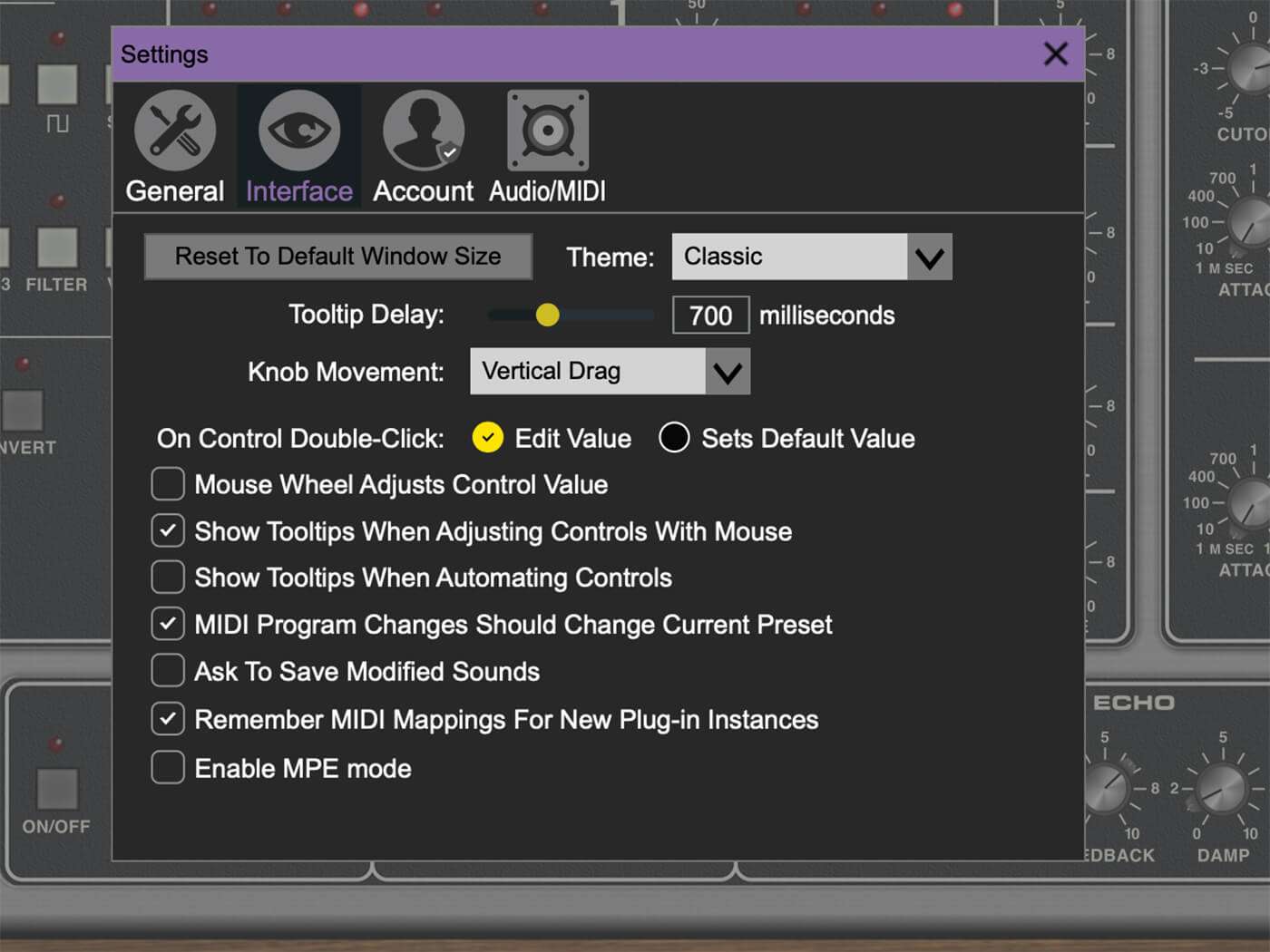 Installing in AU, VST, VST3 and AAX formats for Mac and PC, there’s also a standalone version with comprehensive setup options for audio and MIDI I/O and various parameters. Authorisation is performed by logging into your account inside the synth’s Preferences. There’s a handy Check For Updates option with automatic installation available, something more software instruments would benefit from. You can resize the interface in real time, and there are also preset zoom levels catering for most screen resolutions. A Focus button magnifies the interface for you to scroll around, which is a nice touch.

Once it’s all fired up, the familiar Moog-style interface presents all parameters and controls simply and with no real menu-diving required to access different functions. The only exception is right-clicking on any parameter, which reveals a MIDI Learn / Edit Value shortcut. As well as standard MIDI control, there’s also comprehensive MPE support for more advanced and creative expressive performance. 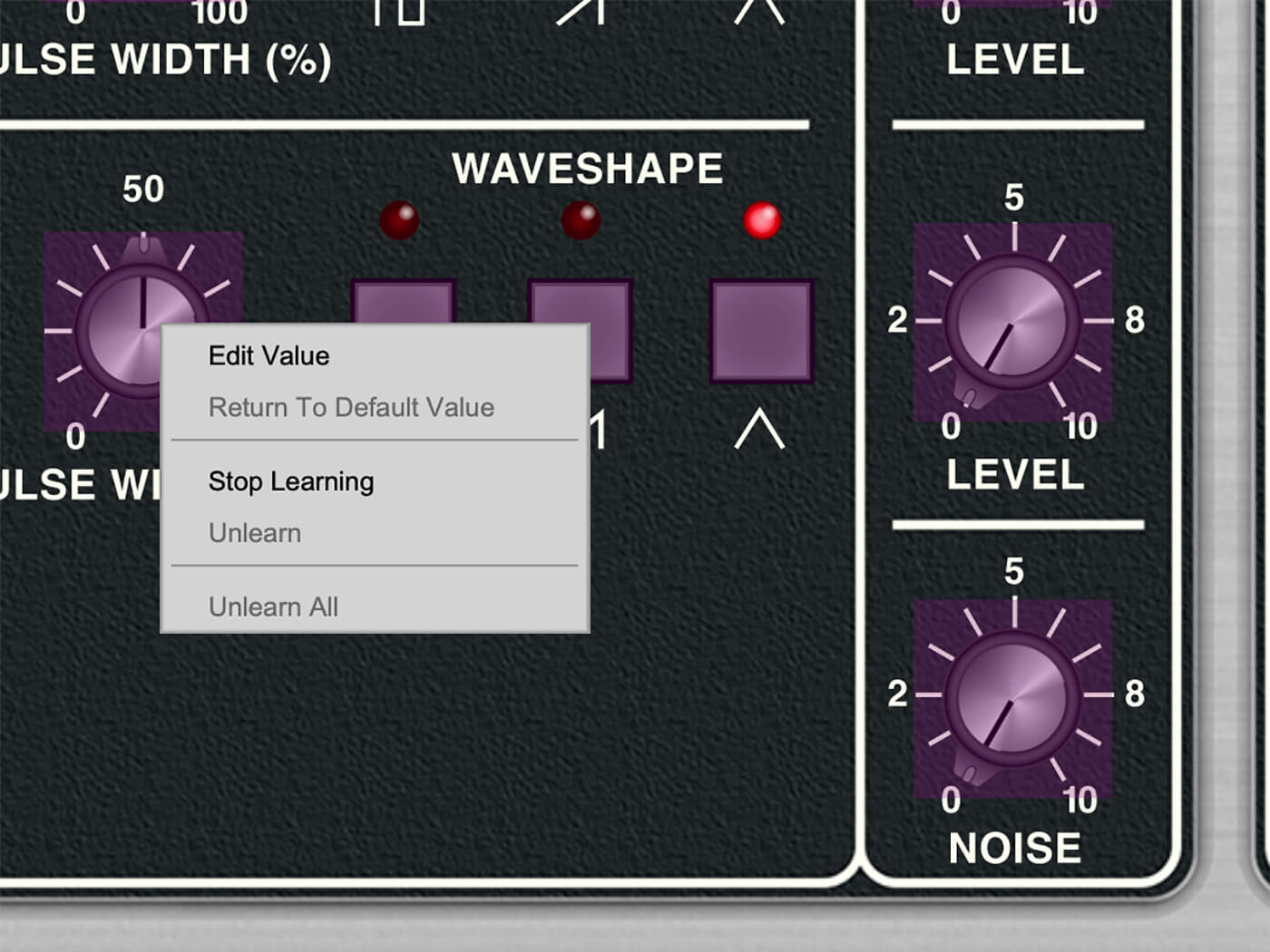 Memorymode has up to 16-voice polyphony, and you can switch sounds to use mono or poly mode from the Keyboard Mode section on the left. It uses a three-oscillator voice architecture, and these are controlled from the central section. Each oscillator features octave, pulse width and waveshape parameters. Interestingly all three waveshapes can be used in any combination for each Oscillator, making for a really rich sound. The Oscillators then feed to the Mixer section, where you can blend in noise. There’s also a pleasing nod to the original synth; a gentle overdrive is introduced when a mixer level goes beyond 4. Even before you get to the other sound-shaping sections, there’s plenty of fun to be had just tuning and tweaking the oscillators. 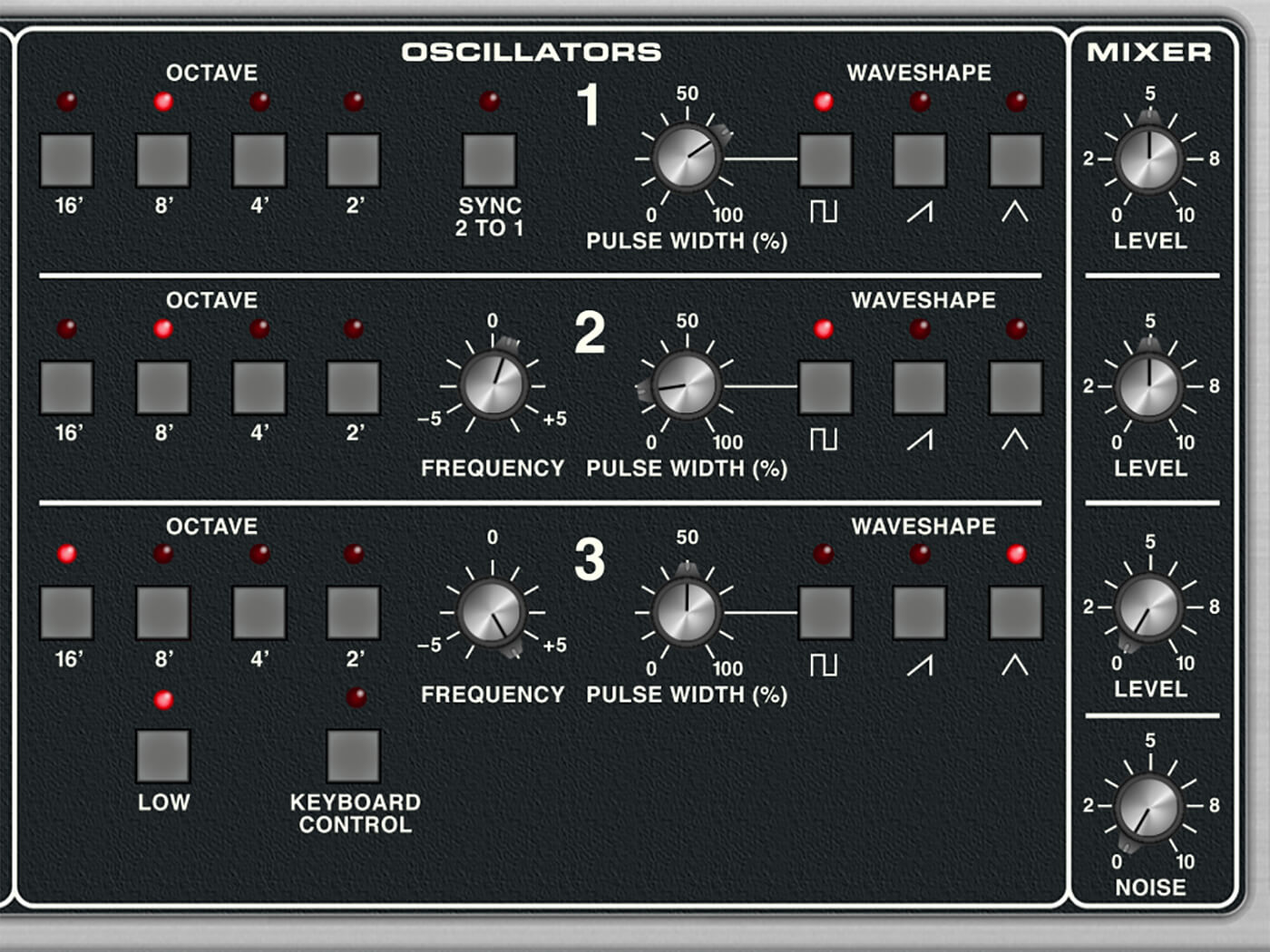 Another integral component to the Moog sound is the company’s filters, and here the team has painstakingly recreated the original’s ladder filter with 12 and 24dB/octave slopes. It’s an incredibly fat and satisfying filter effect, with the emphasis, contour and ADSR controls in the Voltage Controlled Filter (VCF) section making immediate changes to the behaviour of the filter, its shape, attack and the length of its movement. It all feels nicely hands-on. There’s also a Voltage Controlled Amp (VCA) section for shaping the amplitude of the signal. 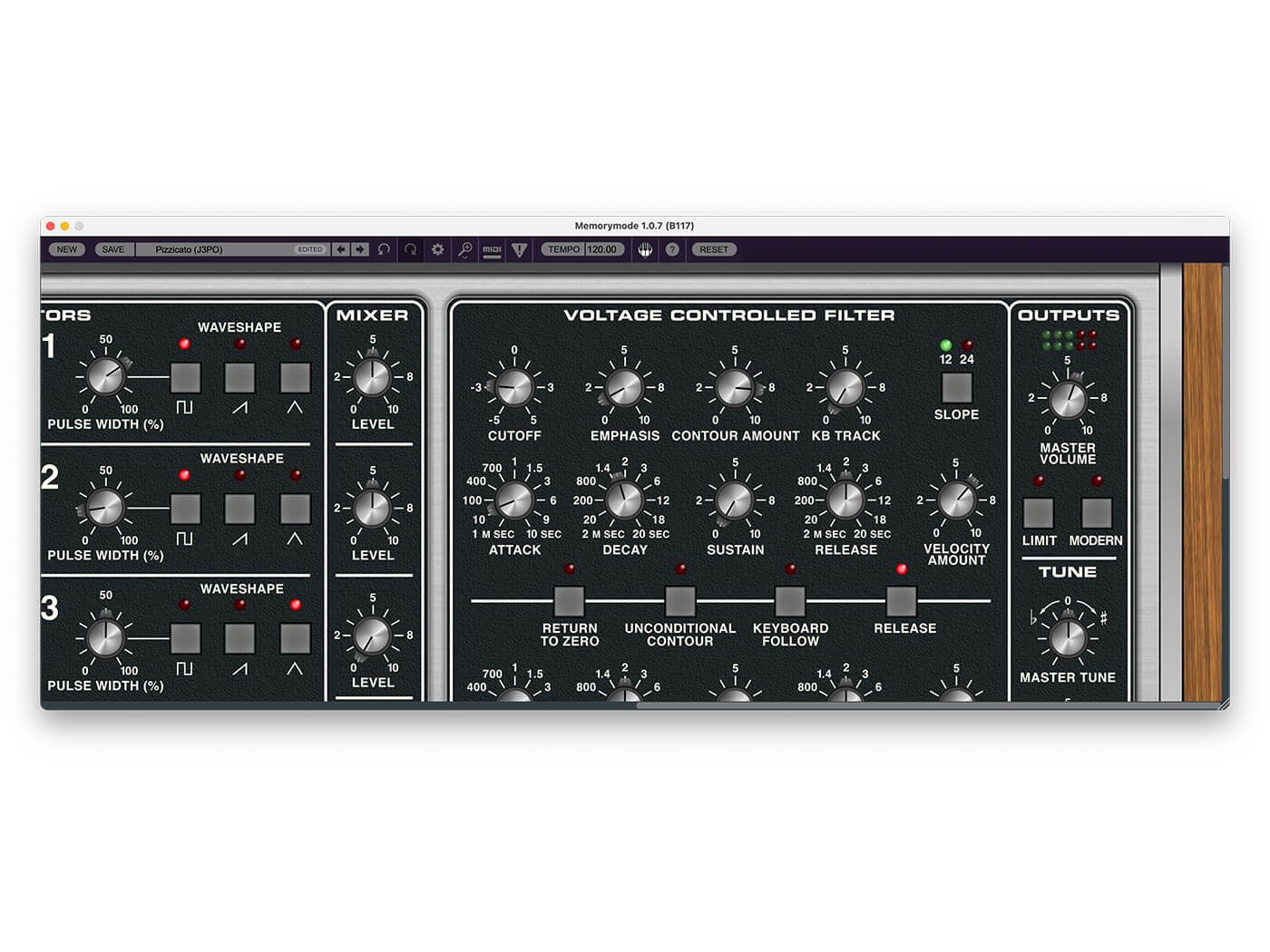 Even if this synth looks moderately daunting to less experienced synth users, it’s pretty straightforward to learn and use due to its wealth of accessible controls. Its knobs and buttons mostly do things that affect the sound in a way that’s instantly understandable and easy to grasp. Cherry Audio’s Memorymode perpetuates Moog’s design philosophy which generally prioritises creativity over complexity.

The Modulation section expands on the original hardware. It allows up to six simultaneous destinations from its two independent sections: Voice and LFO modulation. These modulators work slightly differently from one another. LFO modulation is monophonic, sending a single LFO to all voices, while Voice modulation individually modulates each voice using oscillator 3. With multiple shapes and options, it’s a powerful mod section, though arguably best used subtly for adding movement to sounds rather than all-out madness.

Among the other features, Cherry Audio has added a worthy set of onboard effects, each with its own controls. There’s a Phaser and Ensemble section to add stereo movement, plus Reverb with room, plate and hall types. Rounding out the effects section is a pleasing Echo section with multiple knobs for controlling the depth, rate and feedback of your echoes for everything from doubling to dub-style effects. It’s tempo-syncable, as is the simple but effective Arpeggiator with its six modes for animating your sounds.

The whole instrument can be master tuned, and there are global glide, bend depth, unison detune, and a couple of other notable master parameters. You can use the clever Drift knob to dial in “increased analogue realism”, meaning variable instability in the signal, mimicking the somewhat unpredictable nature of the original’s analogue components. Conversely, a “Modern” button punches up the lows and highs to make any sound more immediately suitable for today’s production requirements. 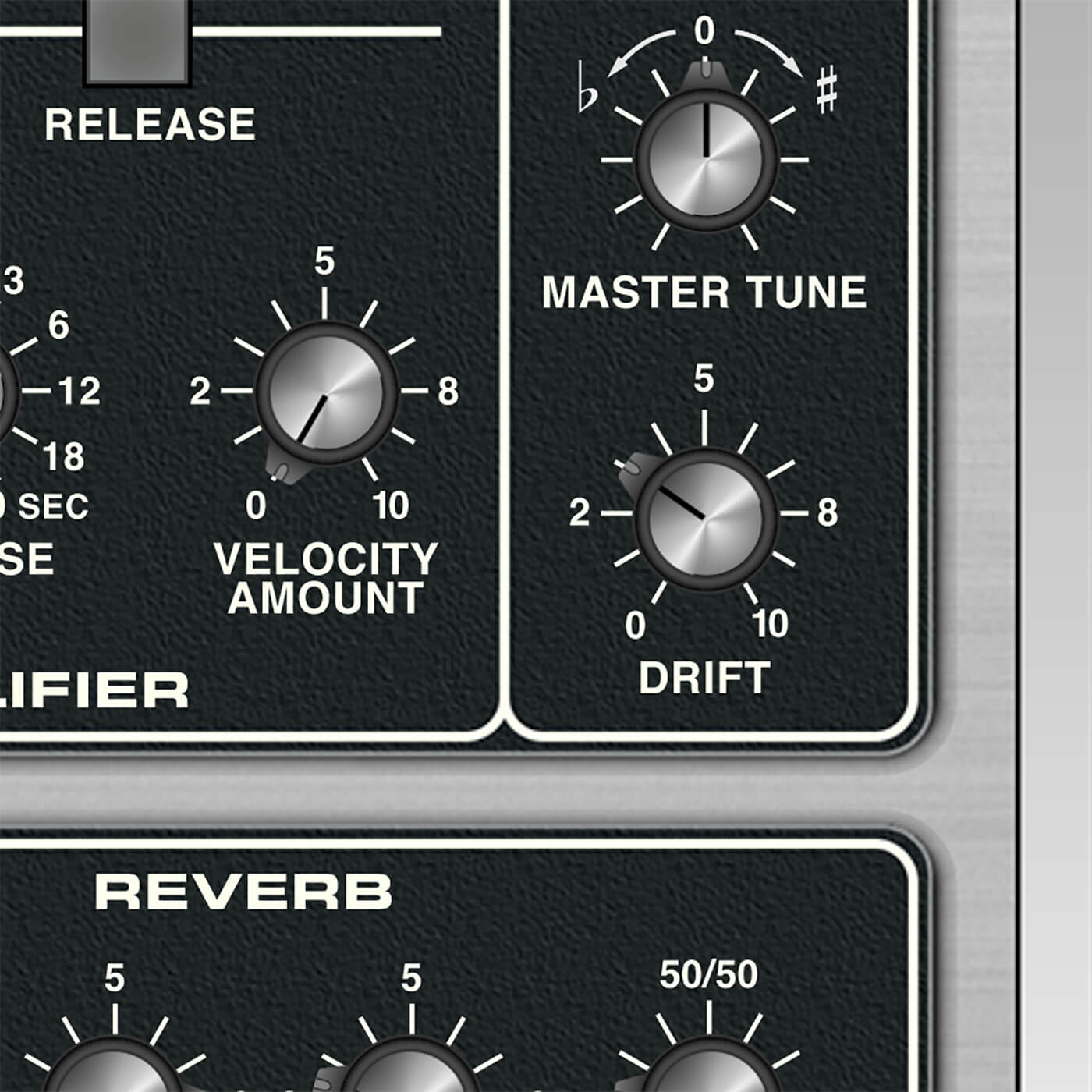 Memorymoog was notable for its 100 presets, which was a lot for its time, but Memorymode comes with over 600 presets programmed by various artists. Sensibly grouped into major categories, these are searchable via a preset menu. You can also modify existing patches and save ones you build from scratch. Like many models of Moog, it covers a lot of ground from big, fat basses through spiky leads, hazy pads, tinny arpeggios and percussive hits. The versatility of sound-shaping tools – from the three oscillators through the filter to the modulation and effects – means it’s possible to squeeze an awful lot of tones out of the instrument. 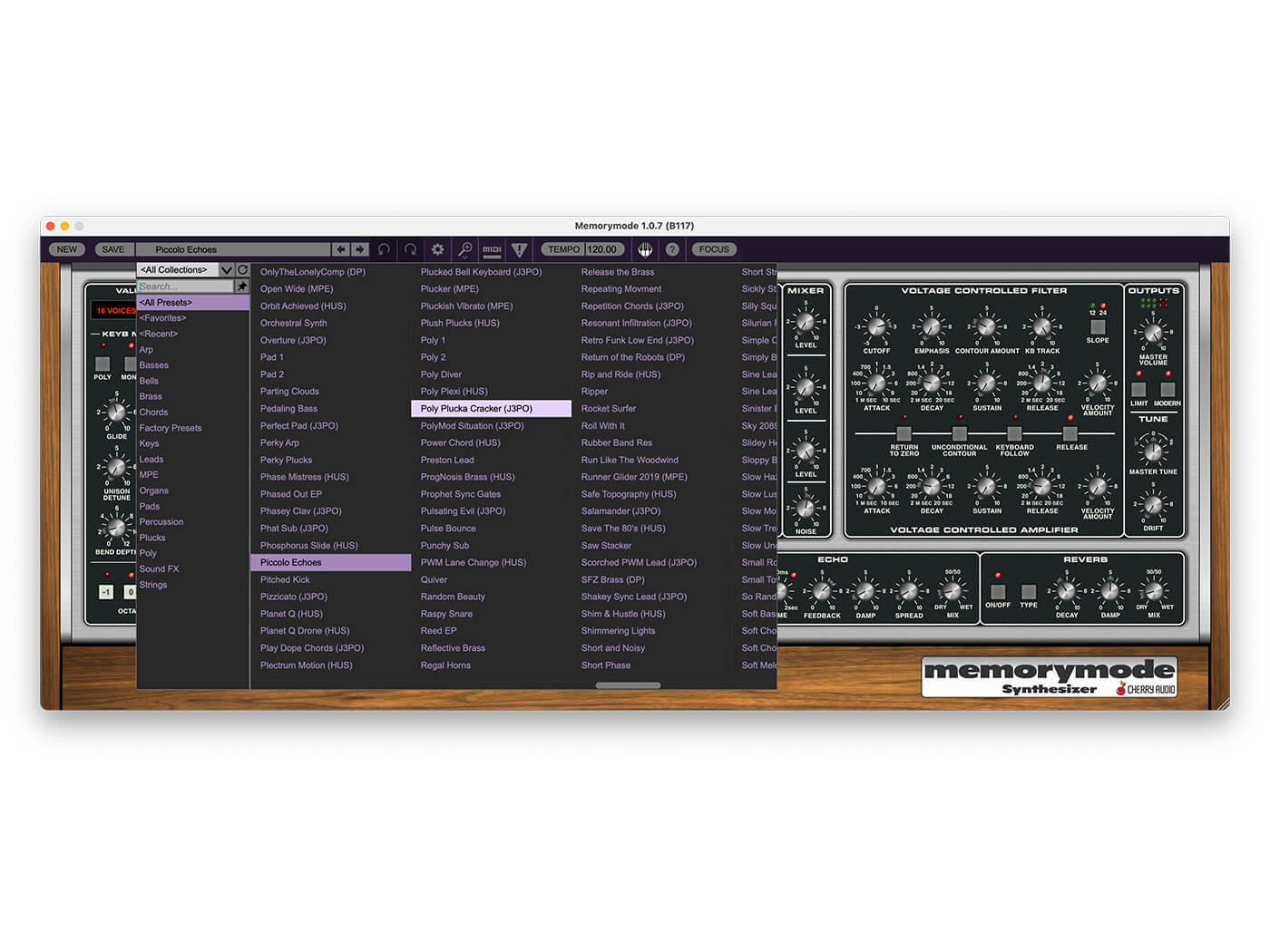 There are plenty of ready-to-use presets here for all kinds of electronic music, soundtrack work or sound design. Even if a preset doesn’t initially have the punch you want, it’s easy enough to tweak a filter here, change the oscillator mix and throw in some Drift and, before too long, it’s much more dynamic. This is also a remarkably easy synth to design patches from scratch. Tweak a few of the right controls, and you’re quickly into the cool stuff. There’s no shortage of Moog emulations on the market, but Memorymode does an excellent job of recreating and expanding on a bona fide classic, and it does so at a very accessible price. A free trial version is also available.