This supremely affordable and powerful soft synth takes you back in time – but could it be more than the sum of its parts? 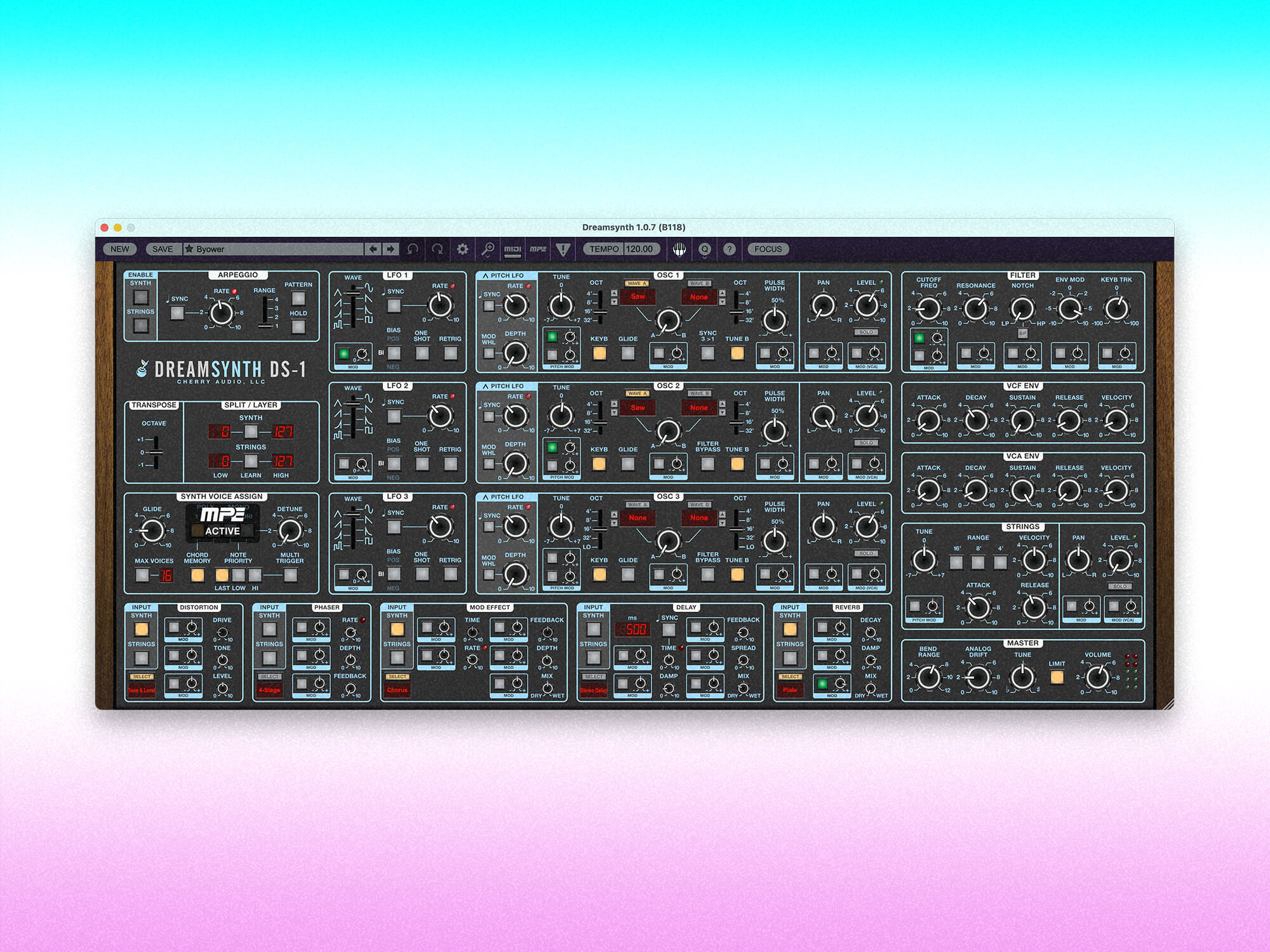 ⊕ Powerful and flexible with tons of sound design and tweaking options
⊕ Extremely competitive pricing
⊕ Split, layer and modulate everything
⊕ Onboard effects add a lot of depth

Cherry Audio has taken a breather from creating virtual emulations of some classic analogue synths and turned its attention to something new. Dreamsynth isn’t a recreation of an existing classic hardware unit but rather a loving tribute to the hybrid analogue/digital synths of the mid to late 1980s, an era when digital synths were starting to become more commonplace. Their unique sound could be heard in everything from pop records to the burgeoning dance scene.

Cherry cites the Ensoniq ESQ-1, E-mu Emulator II, the Kawai K series and the Sequential Prophet VS as inspirations for Dreamsynth, which is a pretty wide range of sounds to take in. Unlike earlier synths by the likes of Moog or ARP, synths of the 80s haven’t necessarily been recreated in software as often and where they have, they can cost significantly more than this one. Arturia’s Emulator II V for example costs £199, and its Prophet V, £149.

Dreamsynth uses Cherry Audio’s proprietary host plug-in, available as standalone software and in all major plug-in formats. The toolbar provides quick access to global tools including the preferences, preset browser, MIDI assignment manager and virtual keyboard. The interface can be magnified or expanded to a range of zoom values, such as 75 per cent or 50 per cent, and there’s also Focus mode that zooms in and lets you scroll freely in a closer view of the various sections.

Parameters can be controlled externally by right clicking and activating MIDI learn, and MPE MIDI is also supported. There’s a global undo/redo system, which is handy as you’re likely to be doing a lot of tweaking and it makes it easier to jump back a few steps. 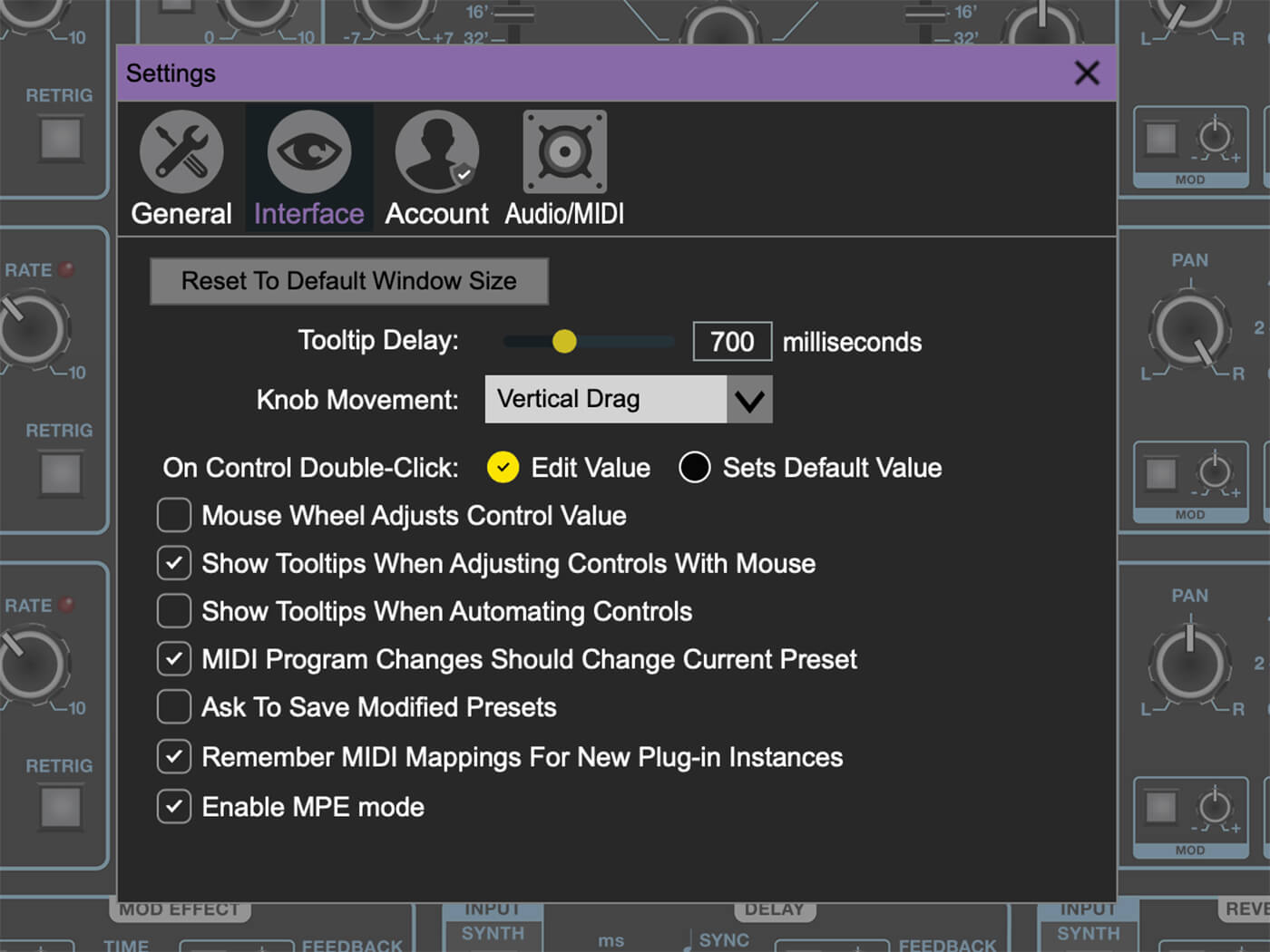 Dreamsynth’s interface is busy. And, although the sections are all clearly labelled, it would have been helpful for Cherry to use different colours to delineate the major sections from one another. It may have deviated from the overall aesthetic but, at least for beginners, having everything in the same light blue is initially a little bewildering. Since you are offered other types of customisation, this one would be nice to have too.

At the heart of Dreamsynth are three dual-waveform oscillators with independent range and detune controls for each waveform, amounting to six simultaneous virtual analogue or PCM sample-based oscillators with up to 16 voices of polyphony. In addition, there’s an independent polyphonic string synthesizer section and the two can be layered and split across the keyboard with separate assignments for the arpeggiator and effects for each. 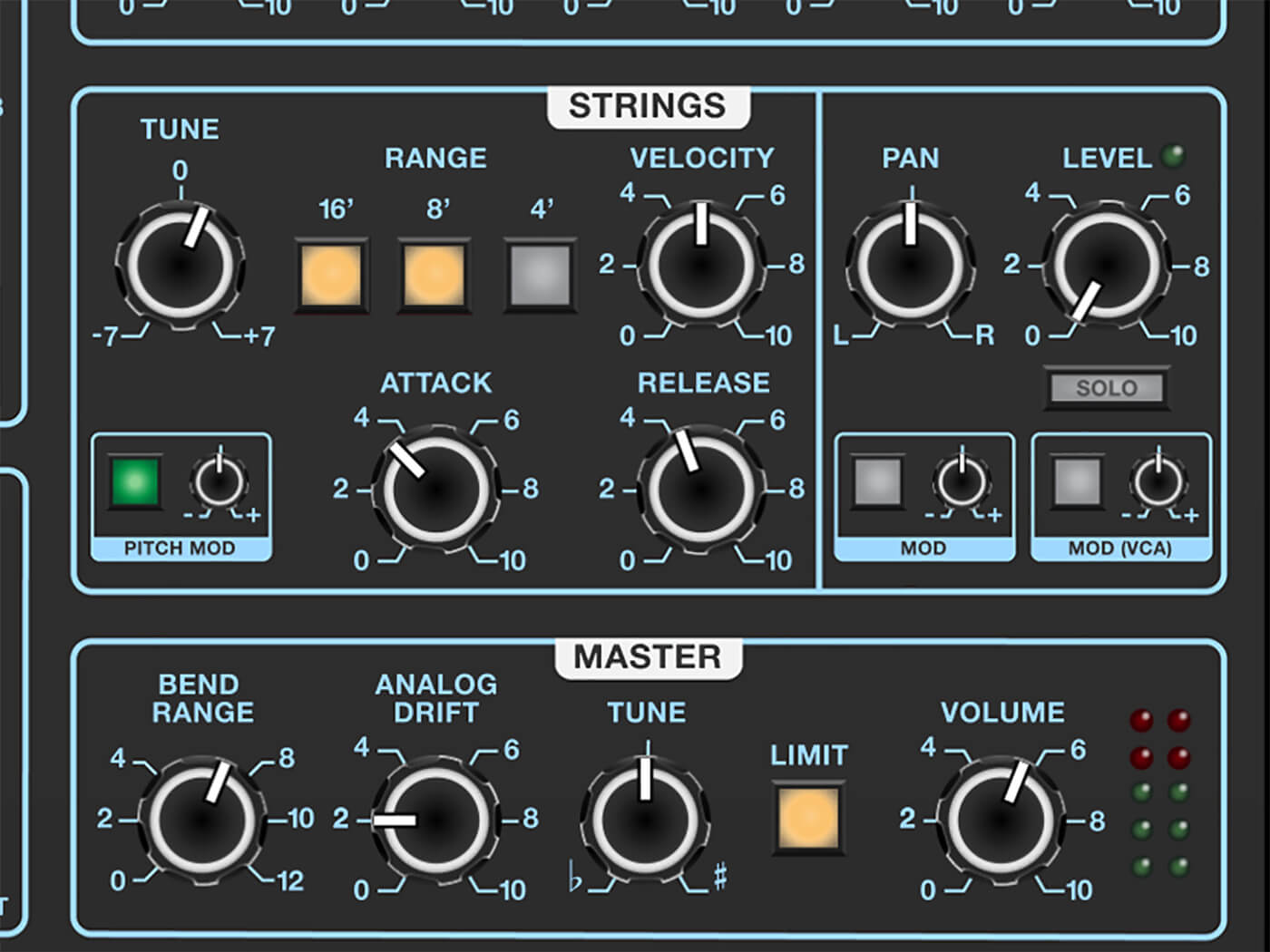 The sample-based oscillators let you choose from a library of 430 sampled waveforms comprising looping, one-shot, and single-cycle waves. Each one can be pitched with a four-stage octave control and a +/-7 semitone knob, and the A and B waveforms mixed with an Amount knob. Each oscillator has pitch LFO controls, as well as extensive modulation options. 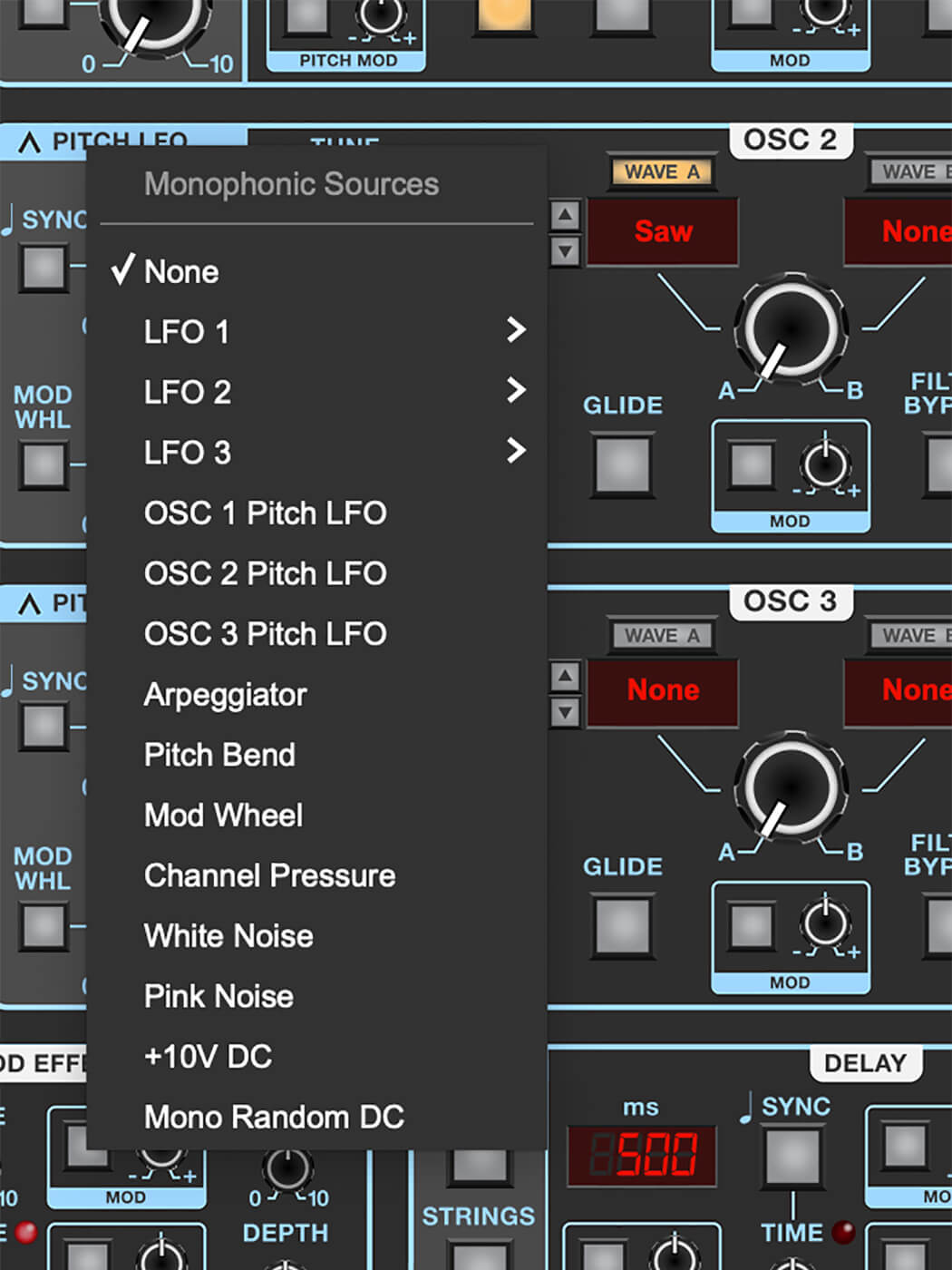 You can simply click a Mod button to select a source, and this system extends throughout the instrument. There are 20 mod sources and over 40 destinations available for the sound engines and effects, so it’s not a stretch to get multiple layers of your sound animated and moving.
Each oscillator section also has level, pan and solo controls and these too can be modulated for more dynamism in the overall signal. The blend controls on the oscillators can allow a static balance between two waves and create evolving or rhythmic vector synth-style tones when modulation is applied.

The signal passes to a full-stereo Oberheim-style 12 dB/octave multimode filter that lets you create super-wide layered and detuned patches. Plus, there are comprehensive VCF and VCA envelope sections for further shaping of the sound. A straightforward arpeggiator can be assigned to the synth or string sections or both, again with click-to-choose buttons letting you make detailed settings, as elsewhere in the instrument.

There’s a solid battery of onboard effects each assignable to synth and/or string sections, and with performance and modulation controls. You get distortion, phasing, modulation, delay and reverb, which all help to add sheen, depth and interest to your patches.

Cherry points in particular to its tape delay and reverb with the Galactic algorithm, and these sound excellent, instantly livening up any patch. The Master output section has a master tune, drift, volume and limiting options so you can process the summed output of all the various sections and send it to your DAW or to a mixer if you’re playing it live. 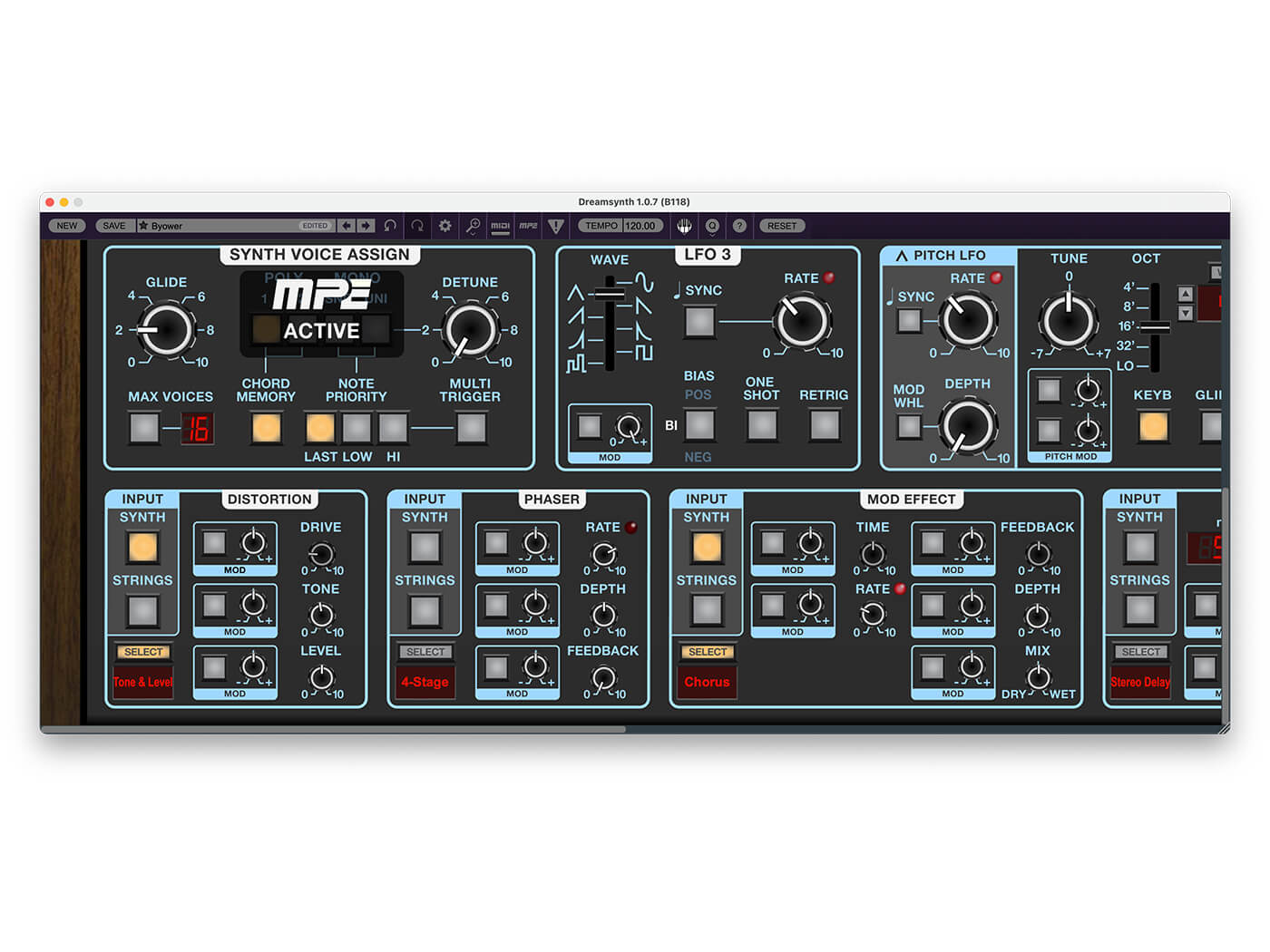 80s sound… and beyond

Although you can, of course, build your own sounds from scratch, there’s a complement of over 800 presets, all easily searchable from the well-designed preset browser.

While some patches are a little dry, others are deep and involving, thanks to the layering of multiple oscillators and the liberal use of effects and modulation. Whatever sound you’re working with, quick tweaks of the filters, tuning of various oscillators and modulation of everything from LFOs to effects will swiftly turn one sound into a completely different one with a different feel.

So, while the presets might tend more towards that distinctly mid-80s style of sound, it’s not arduous to quickly tweak them into something more by adding glide, distortion and the like. And of course, you can always hit the New button to start from scratch.

Dreamsynth is a powerful and flexible synth with a wealth of sound generation and shaping options, letting you cover sonic styles from the retro through to contemporary. The era of synths to which Dreamsynth is paying homage lean sonically towards a mixture of the lush warmth of 70s hardware and the spiky digital sonics that would come to characterise the later 80s and early 90s. It sounds retro, but in a way that’s in keeping with the decade in which its inspirations are rooted.

More than that, though, its broad range of sound generation and shaping tools let you push your sounds into other eras by adding filtering, delay, distortion and generally layering things up.

It’s not quite as simple to use as the developers make out, due to the sheer breadth of parameters you can control, but it’s a tremendous amount of synth power at an incredibly reasonable price.