With this supercharged 1980s-inspired soft-synth, Arturia continues its impressive run of recreations. 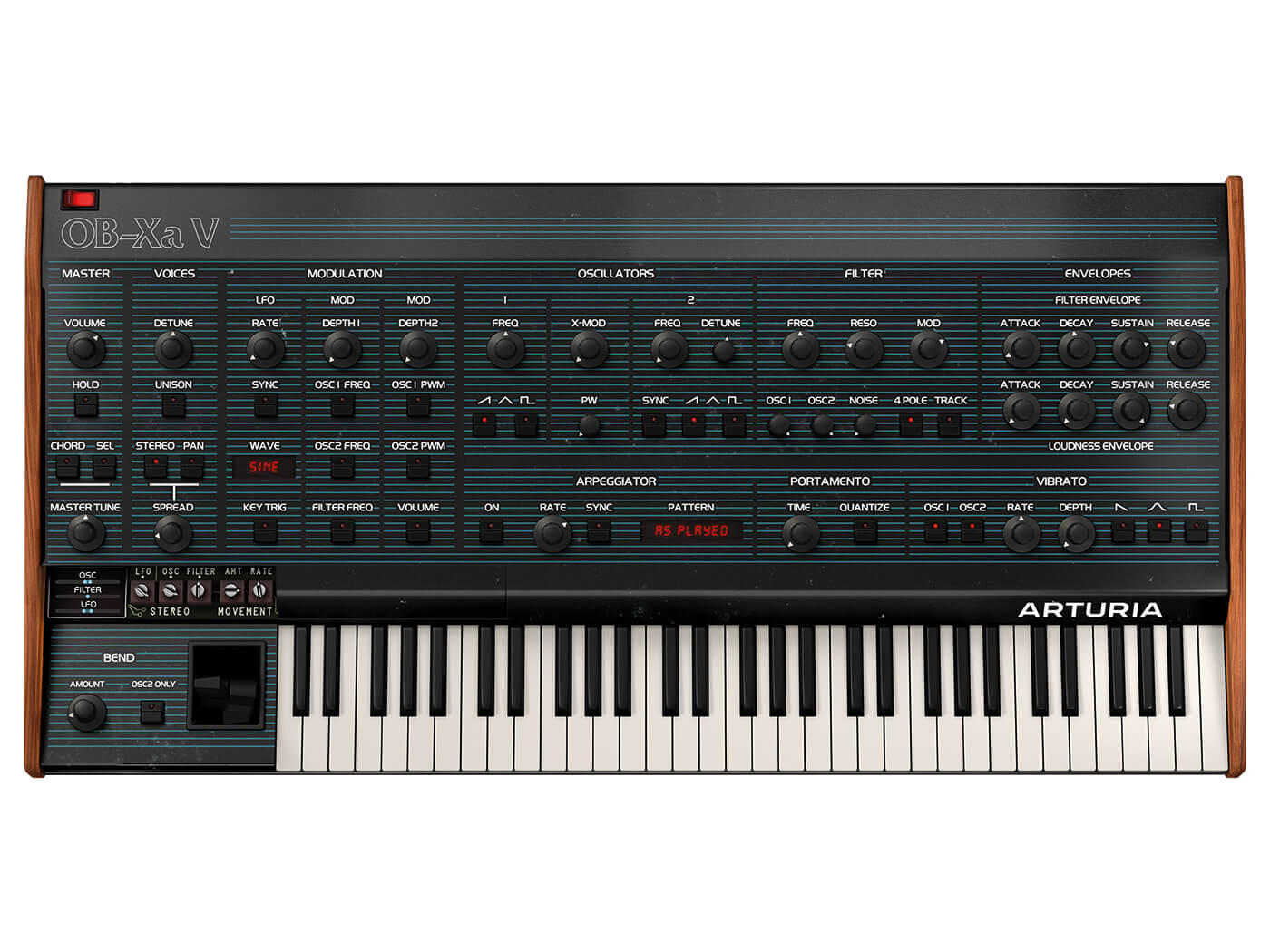 December 1980 saw the release of the LA-based synth wizards Oberheim’s OB-Xa, a redesign of its OB-X released the previous year. The new hardware synthesizer continued the Oberheim tradition of rich polyphonic sounds, and was beloved for its synth brass and string patches. It featured 2 VCOs per voice, with eight-voice polyphony, a switchable filter with 12dB per octave and 24dB per octave slopes, and a resonant low-pass filter, two LFOs, two envelopes, one VCF and one VCA.

The OB-Xa helped define the sound of the decade to come, and featured on such seismic songs as Harold Faltermeyer’s 1984 instrumental Axel F and Madonna’s third-ever single Holiday, as well as on Prince’s Let’s Go Crazy and When Doves Cry, plus many more in his canon. The synth was also prominent in the music created by Queen for the 1980 space opera Flash Gordon.

When we heard that Grenoble-based Arturia were releasing an emulation of this sought-after Californian icon, interests were piqued across the worlds of music tech and soundtracking. The original OB-Xa has long been a favourite among soundtrack composers for its beautiful textures and retro sounds, and is equally desirable in the domain of house and techno producers. But does Arturia’s recreation do justice to this rightfully venerated legend of synthesis? 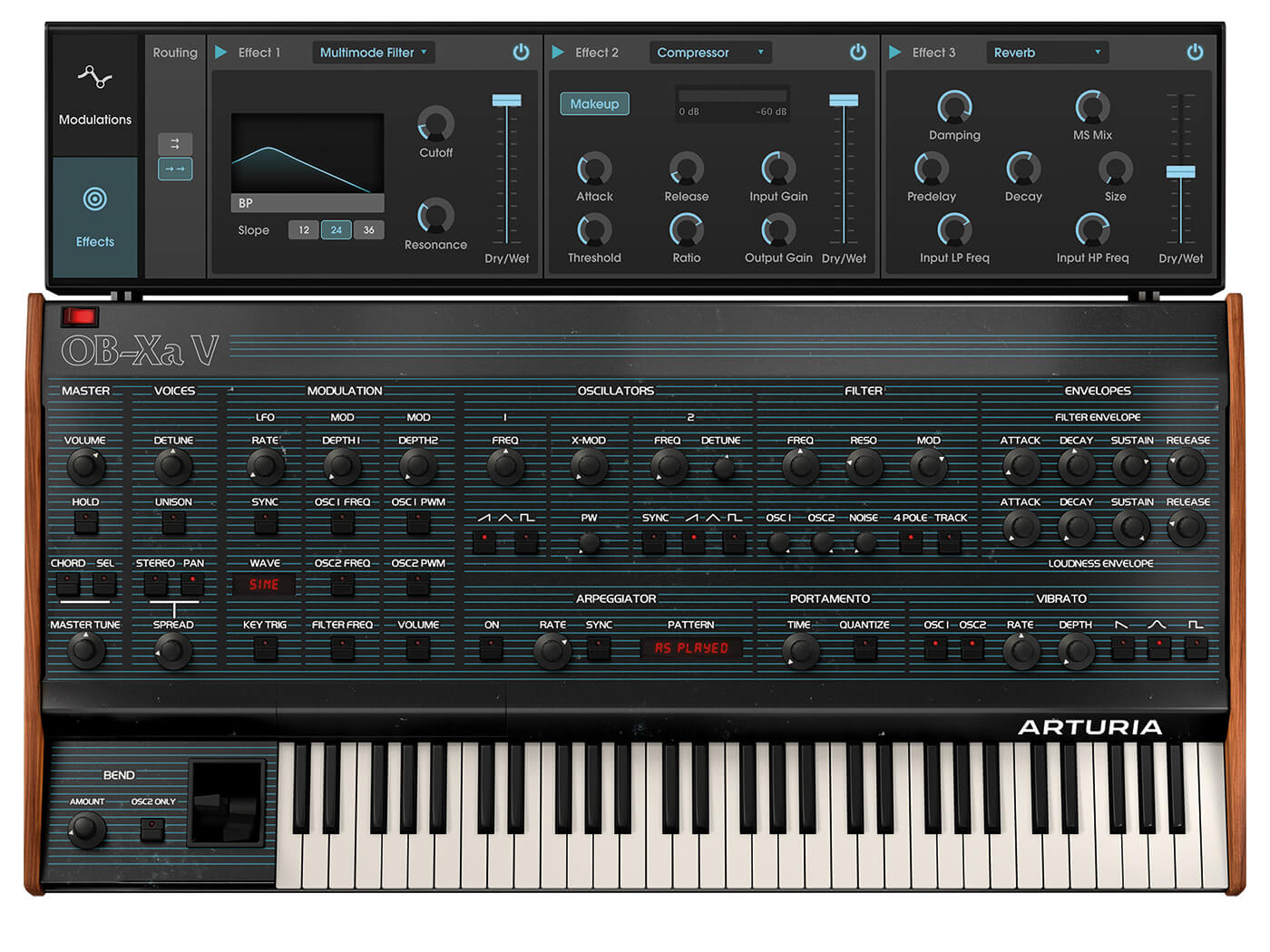 At first glance, it seems so. Arturia’s poly emulation replicates most of the original OB-Xa’s interface features. Its look is almost identical in design but there are some omissions that, fortunately, we later discover are located elsewhere in the build. The front panel has some new additions and, dare we say it, shades of the OB6 about it for added nostalgia. The original two oscillators are included here, each with their original saw and pulse waves, and noise generators, plus square and triangle waves, contemporary quality-of-life improvements that will lend users many more options when designing sounds.

One of the best additions to the oscillators is the optional cross-modulation control, capable of out-there timbres. This was a popular feature available on the original OB-X but subsequently dropped from the OB-Xa. Arturia had the good sense to bring it back. It’s still the single filter with frequency, resonance and 4-pole options, plus modulation control, and the keyboard-tracking option remains too.

The original ADSR envelopes for both filter and amplitude are also still available, the original hardware featured an F-Env switch that let users modulate the pitch of Osc2 using the filter envelope. In this recreation, the filter envelope (F-Env) can be freely assigned to any parameter, including Osc2 pitch.

The modulation section is hard-wired to control a specific subset of parameters, just as it was in the original OB-Xa. Other upgraded new control features include the 16-voice polyphony, double that of the original, and up to eight unison voices to create huge, rich sounds similar to those of a supersaw.

A wide stereo spread control brings the synth up to date, as does the new arpeggiator, with its configurable but easy-to-use controls. The vibrato section on the front of the interface can provide saw, sine and square waveform modulation to one or both oscillators, and is unique to this emulated release. Presenting this functionality up front, rather than hiding it under the hood is a fantastic idea. Why not celebrate such inspiring features? 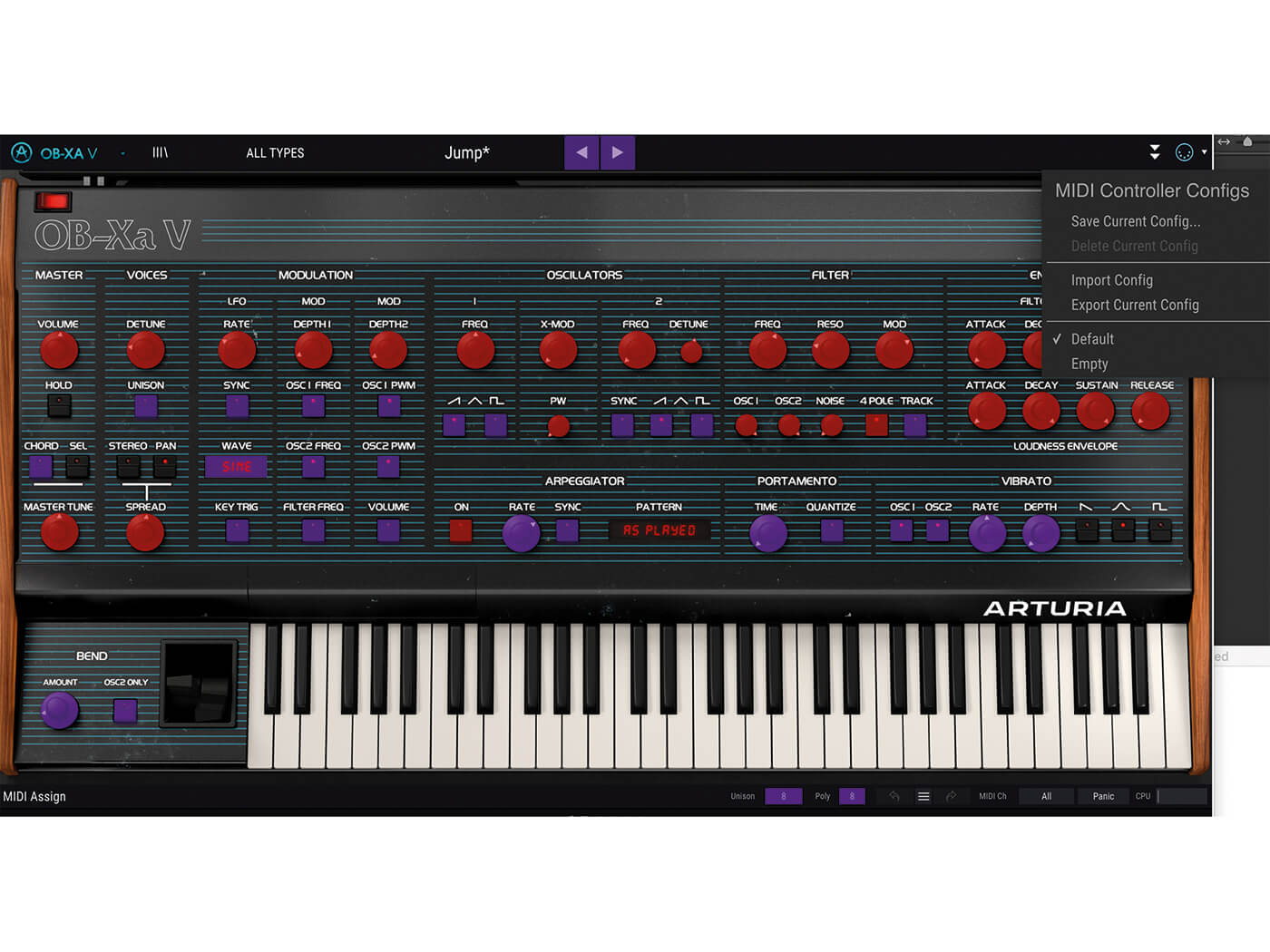 Known for its aggressive sounds and verdant textures, the original OB-Xa was and still is a thing of beauty. To truly emulate the sound produced from such an iconic machine, Arturia again turned to its TAE (True Analog Emulation) technology, through which it’s able to recreate the analogue circuits used in vintage synthesizers.

TAE was vital to Arturia’s other V Collection gems, and remains so with the OB-Xa V. It works by eradicating aliasing when using pulse-width and frequency modulation, both common on digital synthesisers. The algorithms result in virtually identical emulation of the analogue hardware, which is why the OB-Xa V offers such unparalleled sound quality.

When first exploring the OB-Xa V’s 400 presets, all grouped by category, the broad spectrum of what this synth can do quickly becomes clear. Its basses are fat and rich, its pads lush and all-encompassing, and its leads as edgy and aggressive as they were on the original 1980 hardware model. Simply combining the oscillators through the filter section yields instantly rich and recognisable sounds. Arturia has built a truly faithful recreation of the original hardware here, capturing all of its nuances and sonic characters with utmost attention to detail.

What dreams are made of

Technology has rapidly evolved since 1980 and the launch of Oberheim’s original OB-Xa. Today we have technology capable of things that musicians from the decade of shoulder pads and trickle-down economics could only dream of. Take the envelope generator, for instance. Rewind 40 years and it was little but a simple device with primitive attack, hold and decay parameters. In 2020, the envelope generator has evolved into a complex multi-stage device that lets users freely draw and manipulate envelopes onscreen using a mouse.

That same level of control, precision and repeatability is clearly present in this OB-Xa V emulation. Modifying patches is intuitive and simple, and can be done from the front interface, with the easy balancing of oscillators and their waveforms, and the application of continuous cross modulation and other options.

Alternatively, you could simply play around with the new arpeggiator for instant results. Using the stereo spread with left/right offsets on oscillator, filter and LFO parameters takes the sounds you’ve  created to another level. Dropping into the extension panel reveals a modulation matrix, four function generators with which to apply envelope-based parameter changes across virtually any part of the synth, and three effects busses with nine effects each: delay, chorus, reverb, phaser, flanger, compressor, overdrive, multimode filter, and bit-crusher.

The panel has been designed in such a way as to prove attractive to even novices and newcomers to the world of synthesis. The OB-Xa V even facilitates external control thanks to its own in-built MIDI mapping for all front interface parameters.

What might be the OB-Xa V’s most impressive attribute – and its most apt, given that this is a modern update of a historically significant synth – is its history window. Using this remarkably useful feature, users can step back to any point in the creation of a patch, meaning you can go back in time and right wrongs and extricate old sounds you’ve since tinkered too much with. This asset is a microcosm of the Arturia soft-synth’s abilities. What you’re getting with this emulation is a harmonious marriage of classic design and sounds and modern workflow functionality. Long may it last. 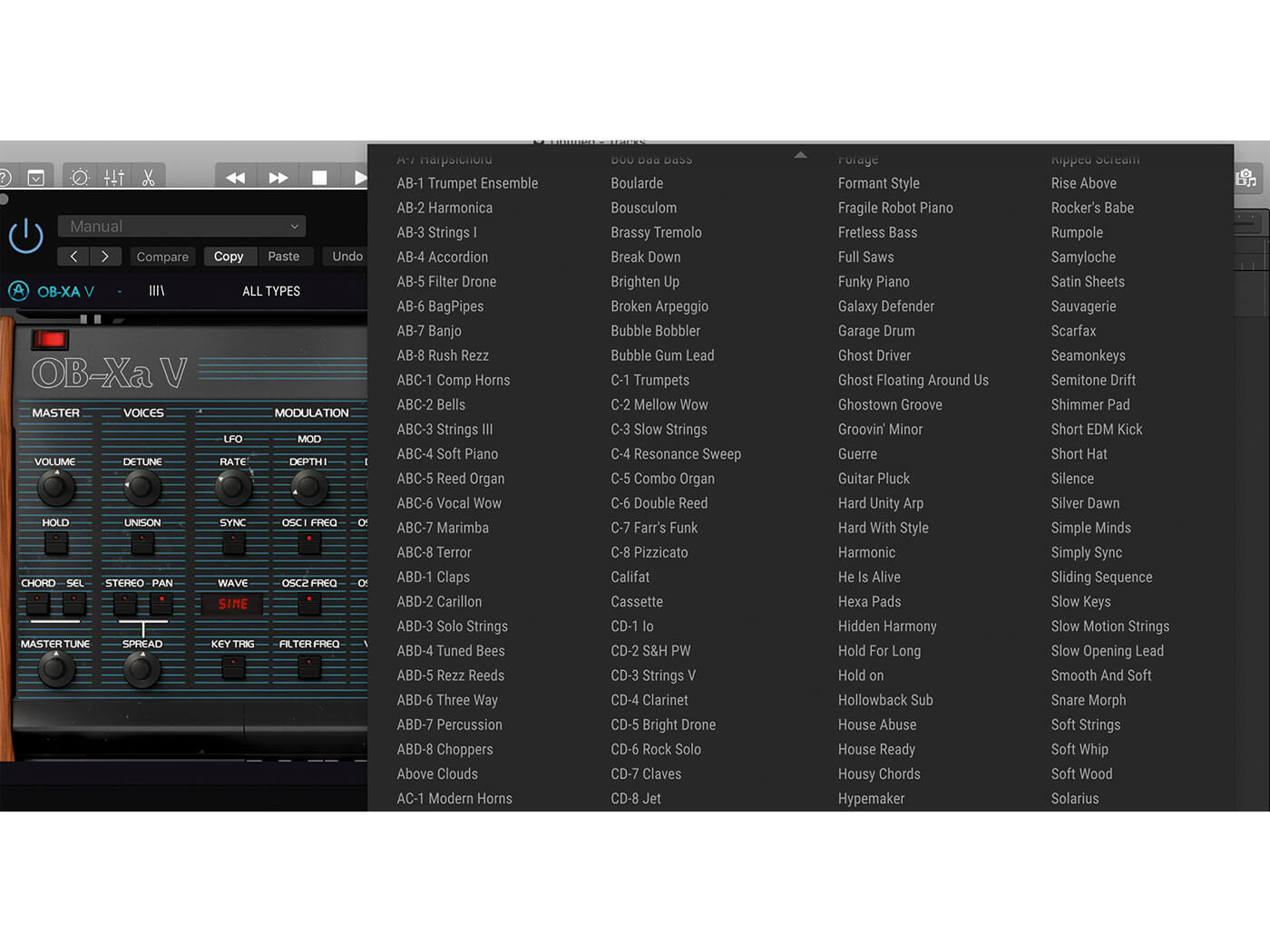 Over the years, there have been various attempts to create emulations of the original Oberheim OBX and OB-Xa synths. Though some have come close, Arturia has perhaps come to the closest with its new V Collection release. If you want to revisit some of the classic sounds of the 1980s, the OB-Xa V will duly walk you back in time, all the while smoothing your composition and workflows with its contemporary additions.

It brings a true sense of nostalgia to any production and comes highly recommended. The new modulation matrix and the addition modern features that Arturia has cannily added make this a strong contender for sound-design tasks too. Some may say that it’s too expensive. They may have a point. But get going with the time-limited trial version and you may find that the price tag is justified. 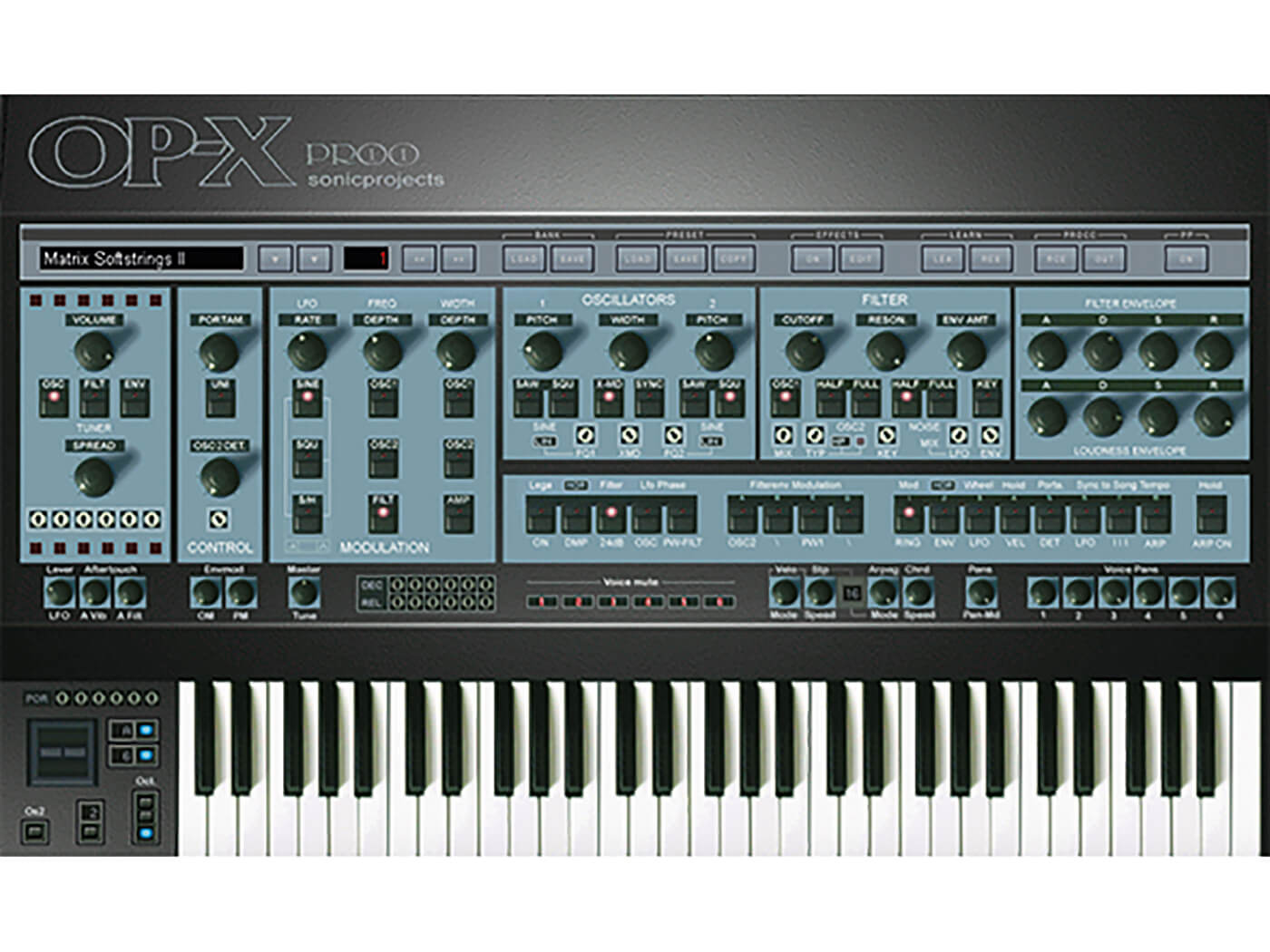 Another close emulation of the OB-Xa, this is the flagship of Sonic Projects’ OP series, and offers countless sound-shaping features and flexible voice management for designing early monophonic-synth-style sounds, including those of classics like the OB-X, Jupiter-8 and Matrix-12. 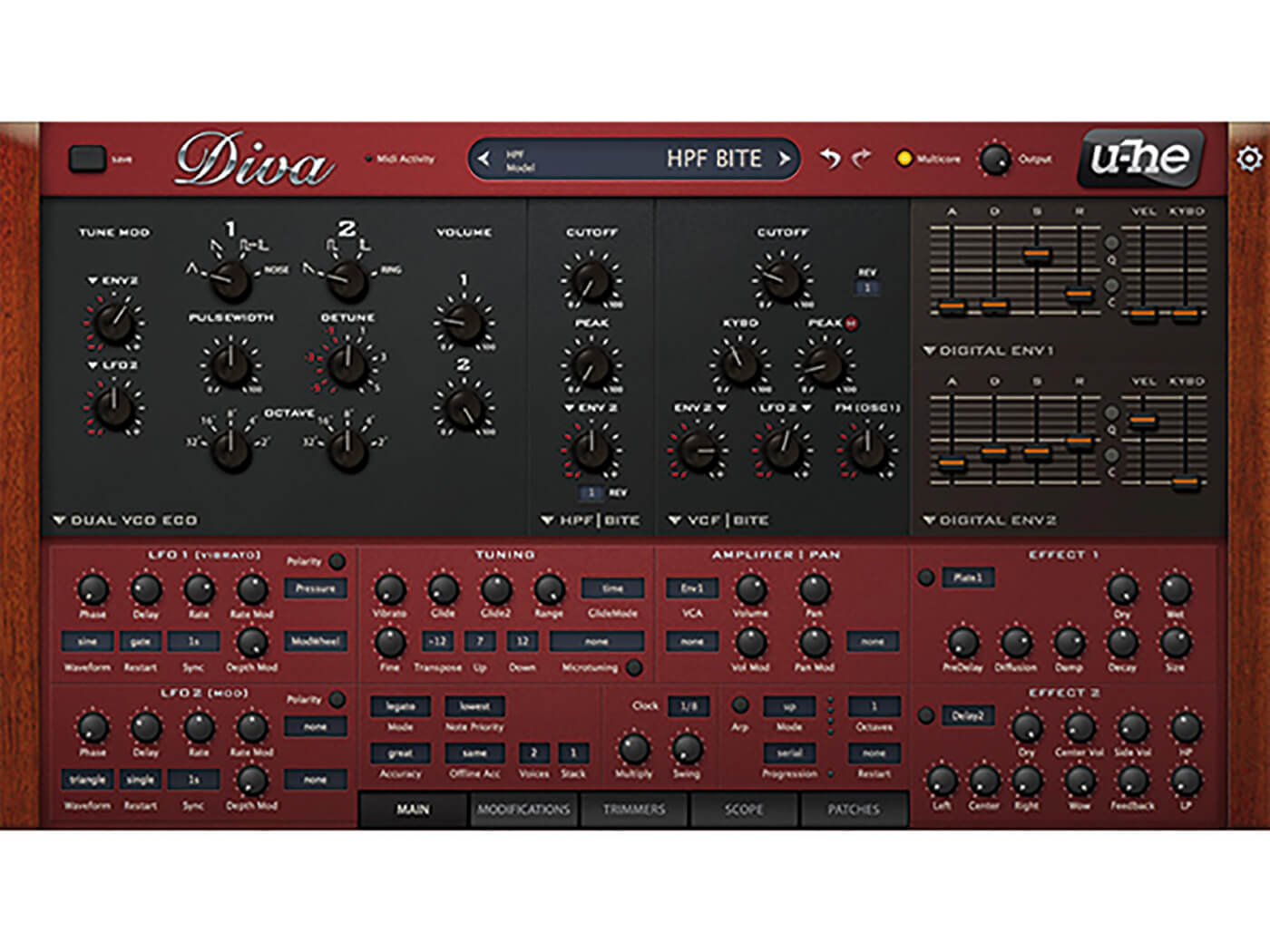 Modelled on iconic monophonic and polyphonic synthesizers of yesteryear, Diva’s modules can be mixed and matched, allowing you to build hybrids. Its analogue sound is highly authentic.