Softube has resurrected the rare, cult-favourite effects box, the OTO Biscuit, in plug-in form. We put our hands into the cookie jar… 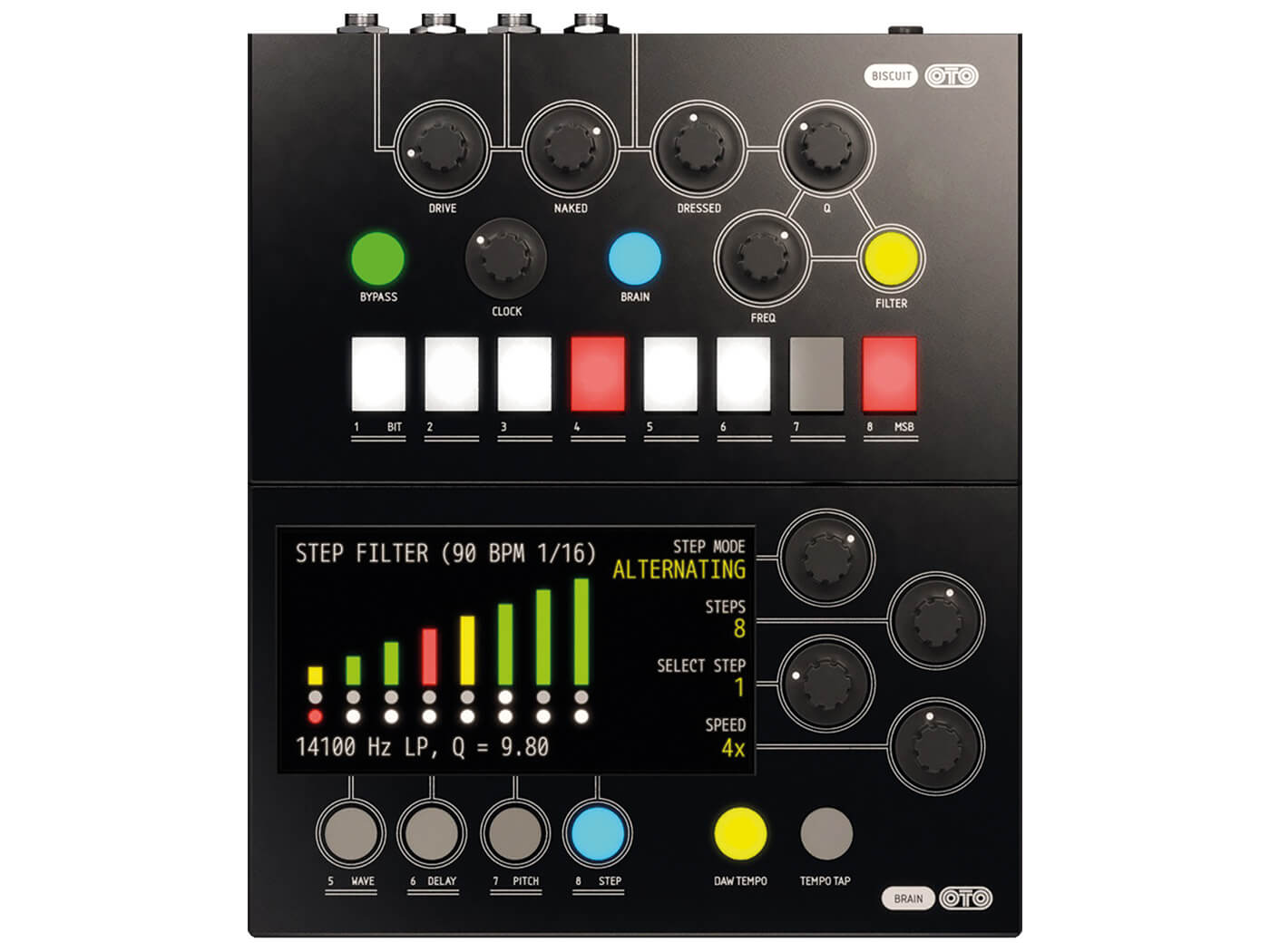 OTO Machines is a small French company making fun, performance-effects boxes, designed to bring any signal to life. Its first product, released in 2010, was the OTO Biscuit; an 8-bit crunch box with a warm analogue filter that could be used in the studio or in the club to mangle and animate sounds, with harsh distortions and aliasing artefacts.

Fast-forward to 2019, and the original hardware box is no longer in production, with second-hand units being snapped up quickly for around £400-£500. Luckily, developer Softube has stepped up to the modelling plate and lovingly created a software version.

This plug-in was originally only available on the UAD platform (for £189), but has now been released in native format for all to enjoy. There are a few hoops to jump through for installation, as you’ll need to have an iLok account, and also a Gobbler account to download the installer, but it’s not too taxing.

The top half of the GUI is a replica of the small hardware unit itself, with a Drive dial on the top left that pushes the signal into a diode clipper ahead of the AD conversion. You then have dials for Clock Speed, Naked and Dressed (aka Dry and Wet – ah the French!) and Freq and Q for the filter. There’s also a Filter button that cycles through green for low pass, yellow for high pass, and red for band pass.

Finally, you get Bypass and Brain buttons and eight main ones enabling you to invert or mute each of the eight Bits. It’s a shame that these aren’t MIDI-mappable, though, as the original unit was built with performance of the buttons in mind. As a rough guide, toggling the Bits as you move from left to right leads to an increasingly distorted and aggressive digital sound. Be warned, the Biscuit is not for the faint of heart and things can get nasty very quickly.

Luckily, the silky analogue filter can be called upon to rein in some of the wayward frequencies and bring back some warmth. It’s a bit of a trial-and-error situation to begin with, though.

So far so good – ‘but what exactly does the Brain button do?’ I hear you cry. Well, beyond the main 8-bit distortion and filter, the Biscuit also has an additional four effects that are switched on via the aforementioned Brain.

This is where the GUI offers up some extended functionality over the hardware, with the bottom half showing controls for each of the effects. There’s a fantastic-sounding Wave Shaper with eight shapes, a good but slightly limited Delay with six delay times and Feedback controls and a lo-fi sounding Pitch Shifter with set intervals and a unison-style Detune feature.

Arguably the best of the bunch, though, is the Step Filter, which allows you to draw in up to eight steps for the analogue filter. When used in conjunction with the bit reduction and drive, this can lead to some dramatic, powerful and animated patterns, with the additional option to either sync to DAW, or use tap tempo.

When it comes to the actual sound, it’s a bit of a beast, and due to the many possible combinations you can get from switching the Bits and tweaking the drive, clock and FX, it takes a while to get to grips with the palette on offer.

My first impressions were that it’s just a grungy distortion box, but like any real hardware, fine-tuning each dial allows you to finesse the sound and tune in a range of specific harmonics. You can, of course, go all out and run the OTO Biscuit fully wet, applying a brutally fat, lo-fi crunch to any synth, sound or beat you put through it, before automating clock and filter sweeps to create glitch heaven.

However, it’s perhaps more versatile and useful when you fine-tune the sound and subtly blend it alongside the dry signal.

My favourite examples include driving the Wave Shaper hard, then setting the LP filter to 50Hz with a high Q to add a weighty, low-end bump to a kick drum. I also generated some lovely additional harmonics on a twinkling arp, and used the filter and delay to layer them in, and programmed a Björk-esque moving filter pattern on a drum buss for texture.

Despite this versatility, it feels as though there are a few opportunities that have been missed in order to ensure this recreation sticks faithfully to the original hardware. While the section on the GUI for programming the Brain is an excellent addition, it’s a shame that you can only use one of the extra effects at a time.

I found myself wanting to distort the input using the Wave Shaper and follow it up with the step filter, but this isn’t possible. The delay times are also quite limited, and it would have been glorious if you could use the step sequencer to control the clock amount.

Although it’s an 8-bit machine, so we should expect some 8-bit noise, it would be good if you could bypass this section and make use of the superb Filter and Wave Shapers without the high-frequency hiss.

Finally, switching in the different Bits can make a dramatic difference to the volume when the drive is set low; I found that certain combinations resulted in a giant leap of over 20dB, which could damage ears and speakers. It might also have been beneficial to include some sort of volume compensation feature to help make it more predictable.

However, it’s perhaps unfair to judge hardware-modelled software for not adding new features. Softube has done an excellent job at capturing the lively, brutal and invigorating sound of the Biscuit and there’s plenty here to get excited about. It genuinely feels like you’re playing with a piece of hardware – and it’s a joy to throw various sounds at it to see what unique craziness it spits out.

If you’re into working with hard glitch- and electro-type sounds, then the OTO Biscuit is arguably the Rolls-Royce of 8-bit effects units, and should definitely be in your arsenal. It’s capable of a variety of lo-fi sounds, and it’s easy to dial in characterful textures that can bring sounds to life. The sound quality is also excellent and the smooth filter perfectly complements the aggressive edge.

That said, although it’s fairly versatile within its own crunchy 8-bit world, there’s only so much it can do in the larger world. Also, it’s not especially cheap, given some of its limitations. However, if you’ve been pining for the discontinued hardware unit, then this is an excellent way to get that Biscuit sound into your tracks. 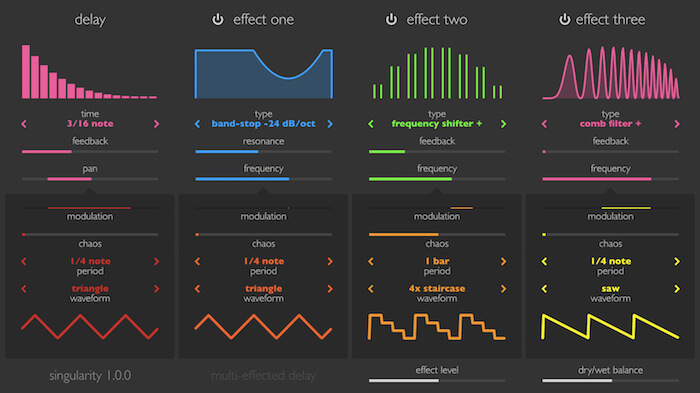 A Mac-only tempo-synced multi-effect that sends a delay into three modules, each with its own modulation section. 22 algorithms include filters, phasers, a decimator, analogue drive, circuit-bent filter, frequency shifter, chorus and granulator. 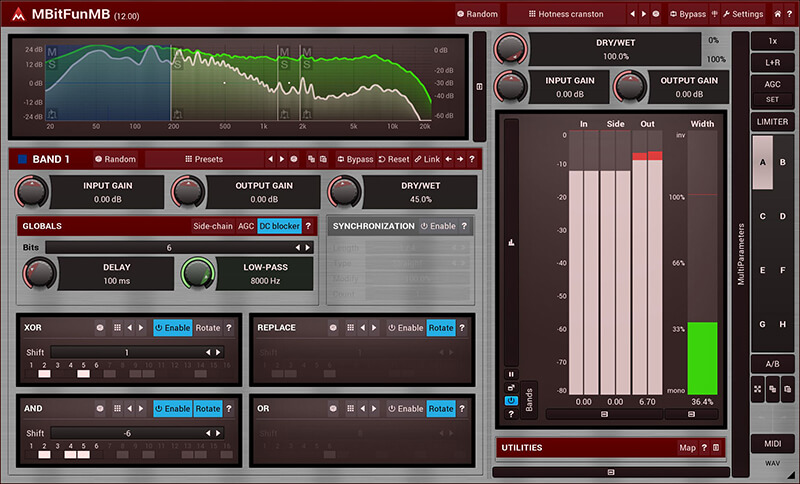 A multi-band processor that converts incoming audio into 1-16 bits per sample, then lets you access each bit with several bit-manipulation operations. There’s also an LP filter and the signal can be split into six frequency bands.