Softube has launched a hybrid hardware/software mixing system. Mike Hillier finds out if this is ‘the one’… 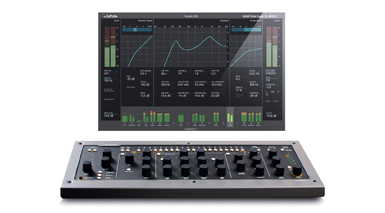 We first saw the Console 1 over a year ago, at Musikmesse 2013, and the concept was creating quite a lot of buzz around the halls. Since then Softube has been hard at work refining and perfecting the Console 1, ready for release.

Console Action
The plug-in itself is slightly unusual in that the plug-in window only shows some very basic controls – the channel number and a solo safe button. You can show the state of parameters from the plug-in window, but it’s a bit small and fiddly. Instead, Console 1 has a separate unique GUI layer, which pops up taking over the whole screen showing all the parameters. This can be resized, for example, to the size of your other plug-ins so you can show several simultaneously. We did find that if you click on the GUI at any point then your DAW is no longer the active application, and so your key commands no longer work – including even basic controls like start/stop.

Thankfully, you should never have much call to click on this GUI as all controls can be accessed from the hardware. Furthermore, it isn’t strictly necessary to have the GUI open at all, as there is some visual feedback on the hardware. Our favourite way to work, once we’d got used to the Console 1 was with the display in Auto mode – this mode shows and hides the GUI layer automatically whenever you alter a parameter on the hardware, or push one of the buttons. It is a shame the controls aren’t touch sensitive, as you have to start twisting a knob, or push a button to bring up the GUI, but you can just press the Display button, which doesn’t affect any of the parameters.

Along the top of the controller are a series of buttons, 1 through 20, that are used to switch the controller from one channel to the next. Whichever channel is active here is the channel that the controller will be assigned to, not the active plug-in in your DAW. This can get a little confusing at first, but soon becomes second nature.

It’s not always easy to know what instrument is on what numbered channel, so Console 1 enables you to name your channels in the plug-in. This means typing in the name of each channel a second time (assuming you’ve named all your channels in your DAW – you have, haven’t you?). The exception to this is in Presonus Studio One 2, and soon in Cubase and Nuendo, where the DAW provides the name to the Console 1 plug-in, saving you the time. Softube tell us they hope to roll out this functionality to more DAWs, but this requires changes to be made to the DAW software as well as the Console 1 software, so is dependent on the DAW designers as much as it is to Softube.

A Walk Down the Strip
Console 1 has five primary sections, first an input section which has an input gain, high- and low-pass filters, and polarity switch. This then feeds the Shape, EQ and Compressor sections, and finally into an output stage which has Drive controls, pan/balance, volume and solo/mute switches. This is a fairly comprehensive channel-strip, and the Console 1 even enables you to route the filters to only the dynamics side-chain and not the direct signal, and to change the processing order, placing the EQ before, between, or after the Shape and Compressor modules.

After working for some time with Console 1, it became much like using a real mixing console with you becoming less reliant on the computer screen and just working with the hardware – no bad thing…

The console strip in Console 1 is based on an SSL 4000 E studio console, but modules can be swapped out for any of Softube’s other EQ and dynamics modules. Unlike the other modules however, the SSL E channel-strip won’t be available outside of Console 1. While based on the SSL 4000 E, there isn’t true like-for-like functionality and in most cases there is actually greater functionality in the Console 1 than in a true SSL 4000 E channel-strip. The Shape module, for example, misses the range knob of the SSL 4000 gate, doesn’t have the fast-attack option, and provides soft- and hard-knee modes instead of the hardware’s ‘Expand’ and ‘Gate’ modes which change the ratio. But it also adds a transient shaper, which is unique to Softube, and makes up for the missing gate features.

The EQ is based on the E 242 ‘black knob’ EQ module which was developed in 1983 with Sir George Martin for his SSL console at AIR studios. The 242 EQ is known for its aggressive tonal controls, with plenty of available gain, and steep filtering. This is the EQ design that SSL continues to use on its E-Series EQ modules. The Console 1 captures the aggression of these curves fantastically, and even enables you to switch the high- and low-bands into additional filters, which can be very handy if you are using the Input module filters for keying the sidechain – again an option not available on the original.

The compressor section includes a mix knob, enabling you to achieve quick parallel compression without the need for additional channels – again a feature not present on the original consoles. The SSL channel compressor is a fantastic and versatile tool, which can be used to tame almost any incoming signal. With a low ratio and slow attack it can be almost completely transparent, but increase the attack and you can get some very aggressive compression. On stereo channels the compressor doesn’t quite have the glue that the later G-series compressor was famous for, but it has a similar vibe, and mixing into the Console 1 across your drums buss can get them sounding punchy with very little compression on any individual channels.

Softube’s Console 1 is refreshing in its design, taking a modern approach and combining it with some classic mix tools – so can it be the best of all worlds?

Fingers on The Buzzer
Our initial experiences with the Console 1 left us a little perplexed as to why Softube had chosen such a tough route, designing a controller that used its own application layer, rather than just a simple MIDI controller designed for the plug-in. But as we got a few mixes under out belt with this system, the controller become a part of our workflow.

The initial set up is a little fiddly, but this should get better over time as more DAWs support the system directly, and once you’re set up and the software is on every channel. It becomes much more like mixing on a real console. You don’t notice the screen as much, and you get used to switching the channel on the Console 1 hardware and just working, without ever letting go to use the keyboard/mouse, except for the odd additional plug-in – much as you might work with a real console, adding occasional plug-ins to your mix as and when you need them.

Automating becomes simpler as you can now grab a bunch of controls simultaneously and draw in your automation, straight to your DAW – the best of all worlds. The addition of a fader instead of the output volume knob might have made the Console 1 a little more like the real thing, especially for automating levels, but we’re happy using the it alongside our existing controllers to bring a little extra hands-on depth, without the physical space required for a full console. 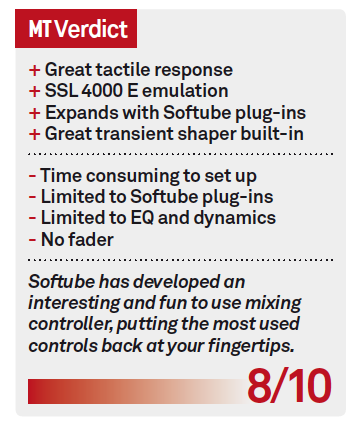 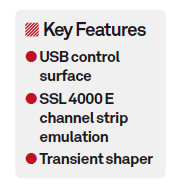