Last month we took a look at how the iPad is changing the world of music-making. The tablet computer has revolutionised how we interact with technology, introducing multi-touch screens to a mass audience. Price TBC (around £12,000) Contact MediaPros 020 8400 9400 Web www.slateproaudio.com Amazon.co.uk Widgets Complete music production is now feasible using an iPad and apps such […] 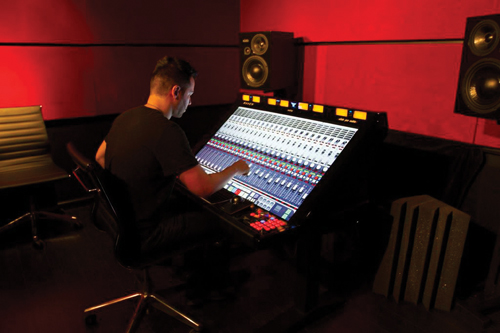 Last month we took a look at how the iPad is changing the world of music-making. The tablet computer has revolutionised how we interact with technology, introducing multi-touch screens to a mass audience.

Complete music production is now feasible using an iPad and apps such as Cubasis, Figure or NanoStudio, and if you want to stay on your main machine apps such as DAW Remote HD provide remote control so you can mix using the touchscreen.

However, these devices are inherently limited by the size of their screens, the I/O capabilities and the somewhat limited processing power. Bigger multi-touch screens are available for use with more conventional DAWs; however, they remain rare and DAW interfaces will need to be completely redesigned to take advantage of multi-touch gestures. Slate Pro Audio’s Raven aims to bridge this gap by placing a software layer designed specifically for multi-touch between the touchscreen and the Pro Tools interface. 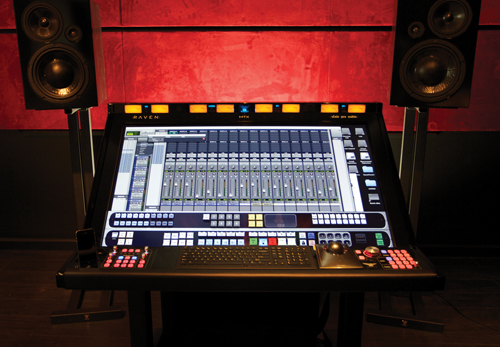 The Raven MTX is a sizeable beast, taking up a similar amount of studio real estate as a console such as the API 1608 or SSL AWS900. The vast majority of the space is taken up by the huge 46-inch screen, which is positioned at a 45-degree angle from the vertical plane, making the controls both easy to reach and not tiring on the arms during long mix sessions.

In addition to this there is a small shelf at the front that houses the controls for the analogue monitor controller, as well as three USB ports, an iPod Dock, headphone ports and space for a wireless keyboard and mouse. The monitor controls are nicely spaced and intuitive for switching between different sound sources and different monitor choices. There is, however, no remaining room for placing a notebook or similar – but at least a hapless musician won’t place their coffee mug on your expensive control surface.

The USB hubs are a worthy addition to this shelf, enabling you to quickly connect a client’s USB drive without reaching around the back of the unit where the Mac is hidden. The iPod Dock, however, seems like a bit of a gimmick. Yes, it can be selected as a monitor source, enabling you to quickly reference songs from an iPod, but there’s also an 1/8-inch aux input for monitoring additional external sources, so it could be seen as superfluous.

At the top of the screen are eight VU meters that can be assigned to monitor the left/right channels, cues and various other sources. And hidden among these are the laptop speakers, which Steven Slate has chosen to name Betty – apparently after the Helmet album of the same name.

At the rear of the Raven is a 4U rack space; 2U is used already by the analogue section of the monitor controller (all of the controls on the front are digital, keeping the analogue signal as clean as possible). The remaining 2U space is there for whatever interface you want to use. Connections to the Mac are in the form of USB and DVI.

The more we got into using the Raven the easier and more fluid the experience seemed. However, so many simple tasks required switching back to the Pro Tools Mix window that the Raven layer itself started to grate. It is in essence little more than a layer of faders and pan controls, which is required because Pro Tools isn’t designed to accept multiple input points, but is instead expecting a single mouse cursor. If Avid could overcome this simple design flaw the entire Raven layer could be removed and the touchscreen element would be an incredible experience. There is no doubt about it: this is a sign of the way of things to come.

We caught up with Steven Slate himself at this years’ Musikmesse in Frankfurt. Here’s his one minute breakdown of the MTX

+ Software layer can be updated

The Raven MTX is an incredible concept, paving the way for a whole new world of touchscreen DAWs in the near future. While the MTX may be out of the reach of many project and home studio setups, the smaller Raven MTI is already on our wishlist.