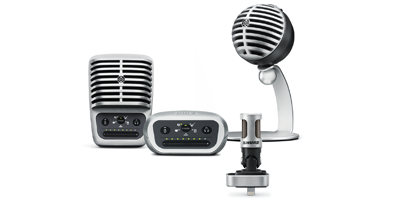 If you’ve been looking for an ultra-compact USB interface or a studio-quality front end for your laptop or iPhone, Shure’s new MOTIV series may have exactly what you need. Huw Price checks out the complete range… 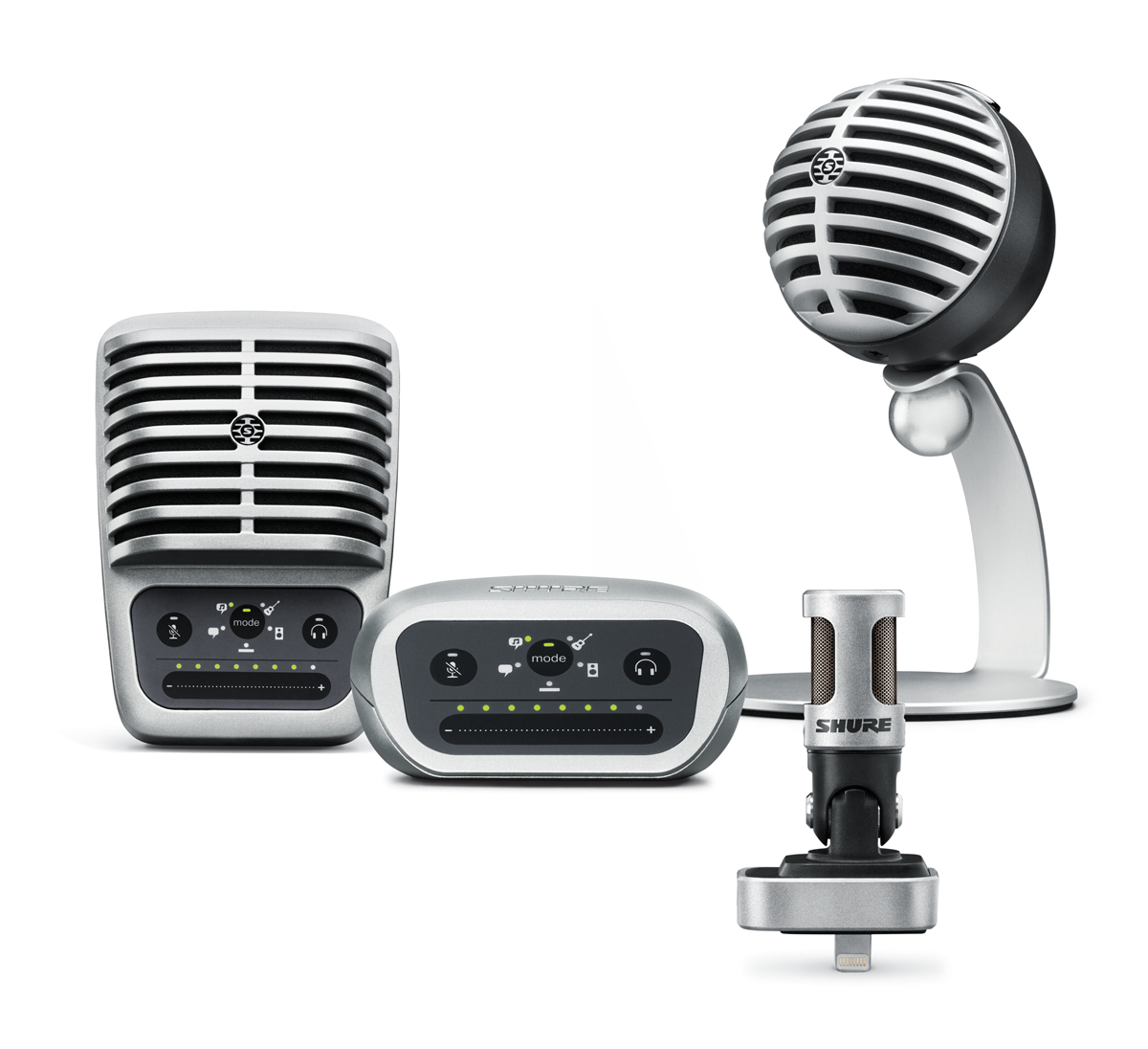 The Shure MOTIV range comprises five somewhat different products, and this month we’ll be testing four of them. The MV5 is a small electret microphone and the MV51 is a large capsule condenser microphone – both with USB connectivity.

The MV88 is also a microphone, but it’s a stereo condenser that can be plugged directly into an iPhone 5 or 6, as well as various iPods and iPads.

Lastly, the MVi is an ultra-compact USB audio interface for microphones and DI’ing instruments. So, let’s take a closer look at each in turn. 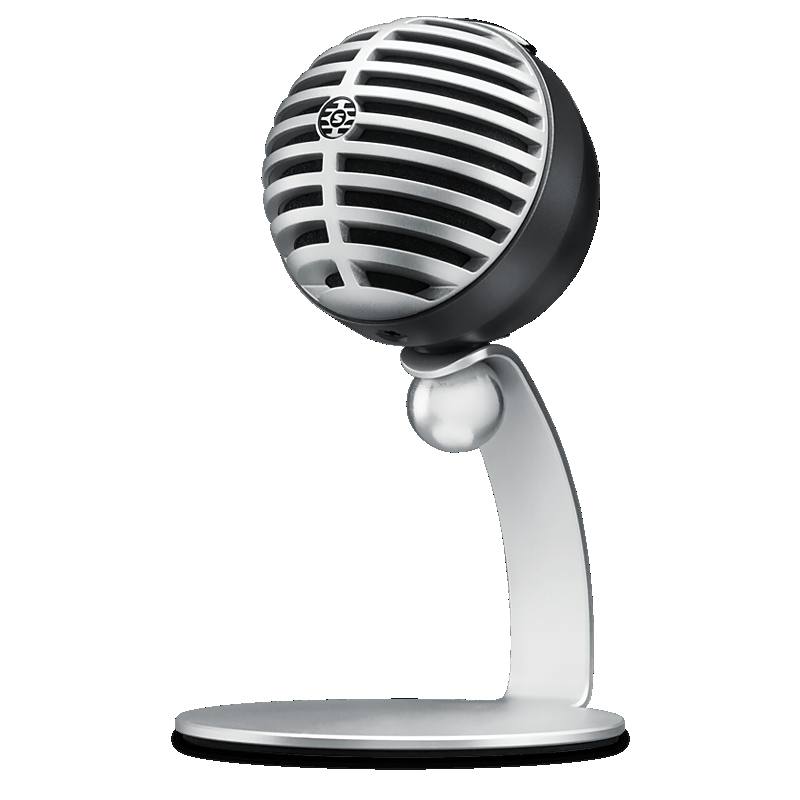 Although it has a plastic body, the design seems inspired by the vintage Shure bullet microphones that are so sought after for harmonica and lo-fi vocals. It ships with an ingenious little stand that closely resembles a Mac screen stand in colour and feel.

It may be lightweight, but it feels very stable and there’s a clever screw-in ball attachment that secures the MV5 to its stand and allows for angle adjustment.

On the back, there’s a Micro-B socket and a mini stereo jack socket for real-time headphone monitoring. There are also two switches to mute the mic and to toggle between three modes.

In use, the MV5 produces ample output level in every mode, and if there is a noise floor it’s imperceptible. Having said that, switching from instrument to voice introduces a trace of hiss, but it seems to vanish after a few seconds.

We found Flat mode a bit… flat, but the fact that both voice and instrument modes sounded so good probably didn’t do it any favours. The instrument setting sounds detailed, natural and realistic. Voice mode is louder, punchier, brighter and more forward. Both are excellent, and your choice will depend on the application. 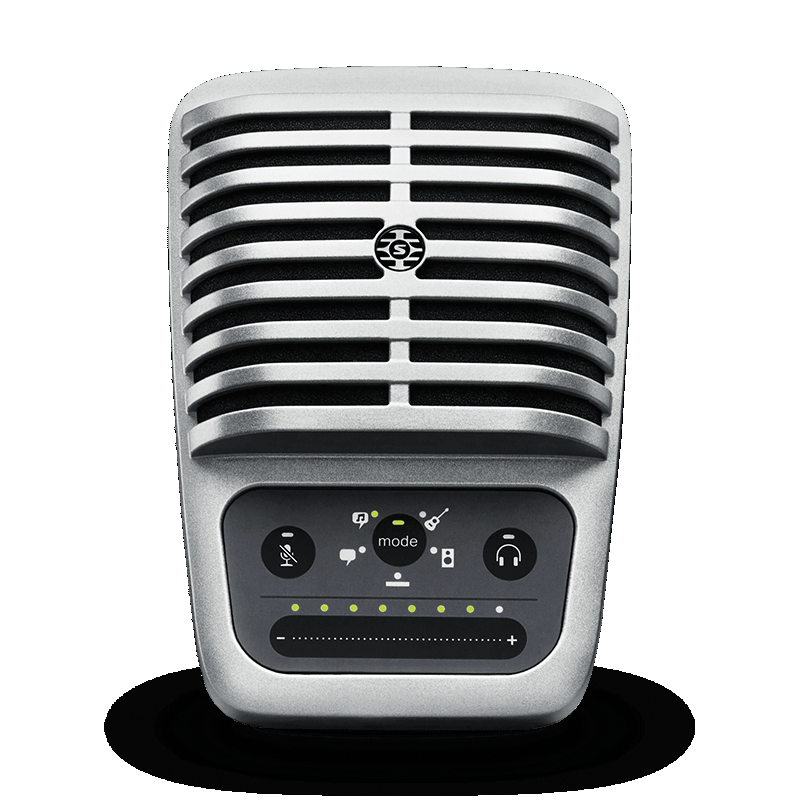 Also retro in vibe, the MV51 is like a steam punk take on rockabilly revivalism. In fact, the original Shure 51 was an omnidirectional dynamic microphone that looks almost identical.

However, the bottom section of the MV51’s front panel is a touch control panel, and you’ll find headphone and Micro-B outputs at the back.

Also included is a tilt-back leg with a rubber foot that allows the MV51 to be placed on a desk. Alternatively, you can unscrew the foot to expose a regular stand mount thread.

It’s the wide USA standard, of course, but a European-style adaptor is supplied; that swinging arm makes it very easy to adjust placement angle.

This time, there are five onboard DSP preset modes configured for speech, singing, quiet and acoustic music, loud music or band, and a flat setting which has no equalisation or compression added.

Again, there’s a healthy level and no noise to worry about. The tone is definitely brighter and more condenser-like, but it’s a mixed blessing. On vocals, it sounds full, present and clear, but in our test recordings we found the MV5 to have a more natural and realistic tone on acoustic instruments.

The RODE iXY (£169) is a stereo microphone for iPhone and iPad with sample rates up to 96KHz. Alesis’ Core 1 (£39) is a one-channel USB interface for DI instruments and microphones.

In Use Tip
To get the best out of the MOTIV range, you’ll need the Shure Plus MOTIV mobile app. You can load this on any Apple Lightning device and you’ll be able to access a digital audio toolbox to optimise results.

The app enables 24-bit/48khz recording with all MOTIV products, and with the MV88 you’ll be able to set stereo width and adjust gain, equalisation, limiting and compression. The app also provides clear input level monitoring. 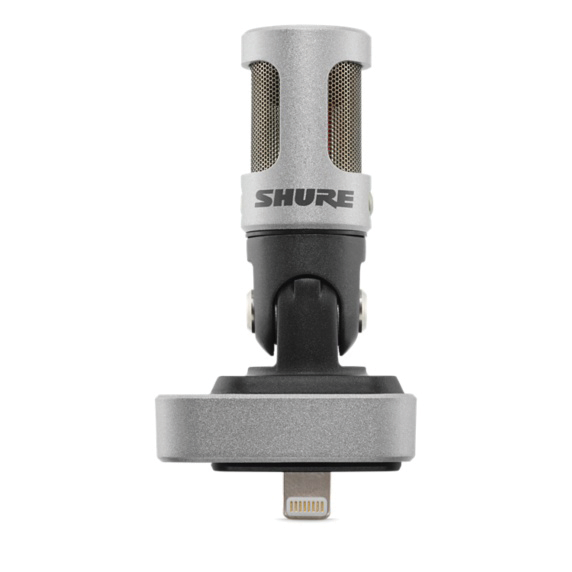 These days, most of us are walking around with hard discs in our pockets that have greater capacity than the hard discs that were installed in most computers only 15 or 20 years ago. So the potential is there to record studio-quality audio onto our smart phones, but the issue is how to capture that audio in the first place.

Fortunately, there are various microphone options, and now Shure has joined the fray with the MV88. This compact stereo microphone has been developed for iPhones, iPads and iPods and, unlike the RODE iXY, you can direct the MV88 wherever you like.

This means you can combine the MV88 with the onboard camera to shoot video with high-quality stereo sound, or flip the camera and mic around to enhance your Skype and Facetime chats. Of course, you can use it to record music, too.

Again, there are five mode presets, and you can adjust gain and stereo width as well as adding limiting, equalisation and compression. Unlike the MV5 and MV51, there’s no space on the body for a control panel, so you’ll have to download Shure’s MOTIV Mobile Recording App.

Downloading and navigating the app is a breeze and the onboard metering provides a clear and accurate picture of input level. Once your audio recording or video is complete, simply connect your mobile device to your computer in the usual way and import the files.

Some experimentation may be required before you find the compression and equalisation settings that work for you, but ultimately we found the MV88 the nicest-sounding microphone of the lot.

The tone was clear, realistic and spacious. Depending on settings, it coped with instruments and vocals with equal aplomb, and the compression effect can get pretty radical. All in all, this is a serious recording device with the added benefit of optional sound processing. 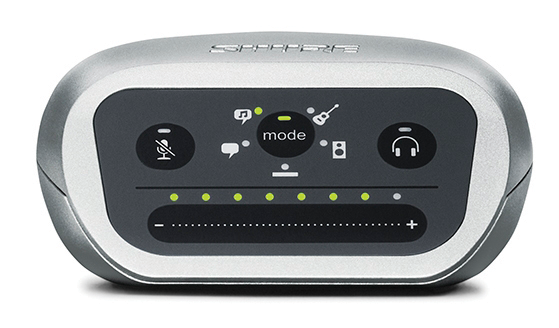 This is the only device in the MOTIV range that isn’t a microphone. Instead, we’re looking at a compact but nevertheless weighty audio interface with one channel. An XLR/1/4-inch jack socket provides inputs for microphones and instruments, and the output can be routed to a mac, PC or any iOS device.

Again, there are five modes, plus a mute switch and a headphone output. For mode selection and gain adjustment, you use the touch panel controls on the front. The package includes a Micro-B-to-USB cable and a Micro-B-to-LTG cable.

The MVi defaults to flat mode when the DI input is used, and it cannot be changed. However, you can adjust gain, and the MVi delivers a clean and neutral sound. Next, we split a microphone output to run through the MVi and a MOTU interface simultaneously.

The MOTU sounded noticeably clearer and more detailed and we didn’t care for the MVi’s bump in the low mids. It’s a usable sound, but a bit of a letdown after the three impressive microphones.

Compact USB interfaces and microphones often seem like boxes that manufacturers feel need to be ticked in the product range. The feel is usually fairly flimsy, and it’s clear that the best available components have not been used. There are exceptions, of course – and each of the MOTIV products qualifies as such. 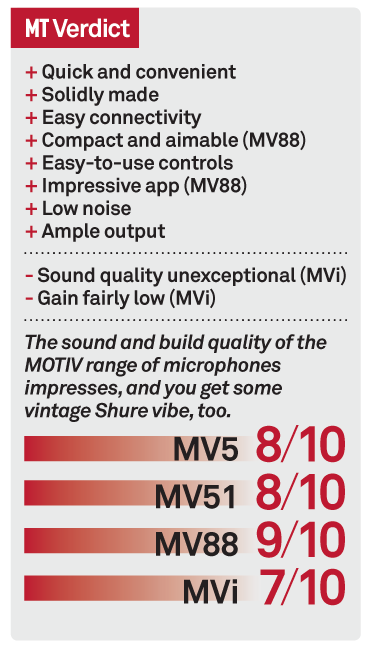