Serpent is aiming to satisfy every sonic desire with its new Lunchbox-format SB4001. John Pickford sounds it out in this Serpent Audio SB4001 Review Amazon.co.uk Widgets For many years, the 19-inch-wide rackmount unit was the dominant format for studio outboard. While this size is still very popular, it takes only a brief look at back […] 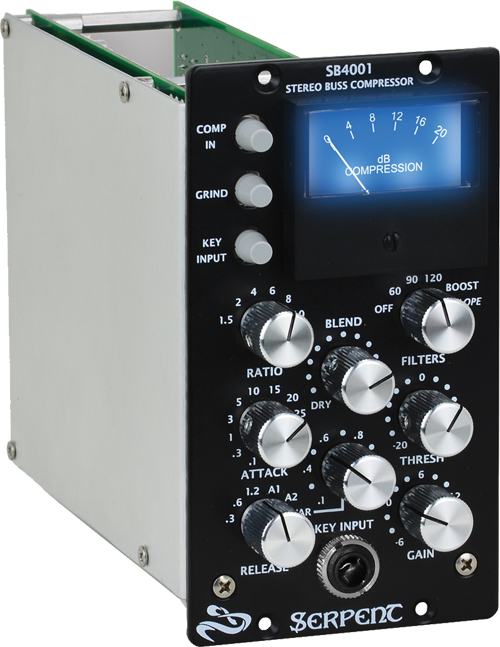 Serpent is aiming to satisfy every sonic desire with its new Lunchbox-format SB4001. John Pickford sounds it out in this Serpent Audio SB4001 Review

For many years, the 19-inch-wide rackmount unit was the dominant format for studio outboard. While this size is still very popular, it takes only a brief look at back issues of Music Tech to see that the 500-Series – also known as Lunchbox – style is becoming ever more popular. US manufacturer Serpent Audio has previously offered a version of its stereo buss compressor as a DIY project, and now, with a few tweaks, the SB4001 is available as a ready-built, double-width Lunchbox unit.

While the SB4001 is primarily designed to be used as a compressor for stereo groups and mix busses, it can also be used with mono sources, but it can’t be used as a dual-mono device. Employing Quad VCAs, Serpent Audio has seemingly voiced the SB4001 to be reminiscent of the classic SSL style of buss compression that made Solid State Logic mixing consoles so popular in the 80s and beyond. The unit features eight control knobs crammed onto the front panel, making operation fiddly to say the least; even slender-fingered users may find this less than ideal. This arrangement is further hampered by the fact that several of the knobs are quite stiff, making operation a bit awkward. On a more positive note, the number of user controls does mean that the unit is quite versatile, allowing precise setting of compression parameters. Fully adjustable pots are provided for Gain and Threshold, while other common compressor controls are stepped.

Six compression ratios are available, from a gentle 1.5:1 up to 10:1, which takes the unit into limiter territory. Attack times come in 12 steps between 0.1ms and 50ms, while release times can be selected by means of pre-set steps or via a continuously variable pot that operates between 0.1 and 1.2 seconds. The stepped release times can be selected at three classic settings – 0.3, 0.6 and 1.2 seconds – while two Automatic Release settings offer program-dependent response times. The first of these – A1 (Classic Auto Release) – behaves in a similar way to the aforementioned SSL compressors, giving a fast release time on fast transients and a slower response with less dynamic sounds, while the second Auto Release is faster, working well with more rhythmically charged material.

Curve Ball
A very useful control is the Blend pot, which enables parallel compression effects to be achieved within the unit. We got some great sounds by over-compressing the signal in Wet mode and dialling in some of the dry signal to restore natural dynamics. The filters also proved useful when compressing signals with a lot of low end.

Five settings are offered, the first three being high-pass filters at 60Hz, 90Hz and 120Hz, while the remaining two – Boost and Slope – send bespoke EQ curves to the sidechain, which again allow the upper frequencies to be more heavily compressed than low-end audio. These curves do not filter the audio itself, just the frequencies to be compressed. The unit’s sidechain can also be triggered by making use of the mono balanced TRS connection on the front panel – very handy for ducking effects or de-essing an overly sibilant vocal by sending the track to an external equalizer and then sending the EQ’ed signal to the Key Input connector. It’s becoming common these days for units such as this to feature some sort of vintage colouring option, and the SB4001 has a push-button labelled Grind that adds a valve-like harmonic saturation to signals when engaged; this feature can be used to enhance signals even when compression isn’t taking place.

We found the SB4001 to be a very capable and versatile compressor. Used gently with no vintage sonic colour, the unit is very even-handed and quite transparent, but when pushed hard it can produce some extreme compression effects. The filter section impressed us greatly, especially when dealing with sub-groups containing significant bass content; treble spikes can be tamed without bass instruments – kick drums, for example – setting off the compressor. The Grind option proved to be a winner with all who heard it, particularly on drum mixes, where it seemed to make the sound both bigger and more cohesive.

Although the crowded front panel makes setup rather fiddly, the sonic rewards are plentiful, with numerous compression styles at your fingertips.

The SB4001 performed very well with everything we processed through it, whether it was providing transparent levelling of vocals or adding power and punch to drums and sub-mixes.