The impressive X1 range from sE Electronics continues to grow and grow. Mike Hillier checks out the latest additions to the line-up. Details Price X1 T £349, X1 D £199 Contact 0845 500 2500 Web  www.seelectronics.com When sE launched the original X1 we were very impressed at the quality they were able to achieve with such an inexpensive […] 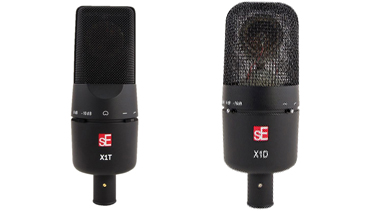 The impressive X1 range from sE Electronics continues to grow and grow. Mike Hillier checks out the latest additions to the line-up.

When sE launched the original X1 we were very impressed at the quality they were able to achieve with such an inexpensive microphone. Featuring handcrafted and tested capsules the X1 really was a standout microphone in its price range. Not happy to rest on its laurels sE has taken the X1 chassis and created an entire range of mics, adding the X1 R ribbon mic, the X1 USB mic that we looked at in MT136, and the two mics we’re looking at here: the X1 T and X1 D.

First Up
The X1 T is a valve mic built around an ECC83A (a low-noise version of the ubiquitous ECC83/12AX7) valve. The addition of the ECC83A valve to the X1 design means a dedicated power supply has to be used with the X1 T, and this connects via a provided seven-core cable and then connects to your mic preamp over standard XLR. The X1 T has a fixed cardioid polar pattern, and switches for a 10dB pad and high-pass filter on the mic.

For many engineers, valve mics are a go-to choice for lead vocals, as the extra excitement brought out by the valve can help the vocal to sit above everything in the mix – and the X1 T does exactly that. On our voice the X1 T produces a smooth, clear response with a slight push around the upper mids, which helps to add clarity and definition to the vocal, while a subtle high-end lift will add a shine on any signal passing through it.

By contrast the bottom end seems a little light, and while it works on our vocal it may not be perfect for everybody and would make us think twice before settling on this mic for some other duties such as acoustic guitar, bass or some percussion.

At only £349, the X1 T is one of the least expensive valve mics we’ve come across, but it has a sonic quality that puts it among mics well outside this price bracket.

The mic comes in a flight case that’s designed to carry all the accessories, including the power supply and seven-core cable, but does not come with a shock-mount, only a standard mic clip. At this price, though, it isn’t surprising to see the shock-mount overlooked, and sE Electronics will sell you a shock-mount as part of their Isolation Pack, along with a pop shield, for £49.

Tub Thumpin’
The X1 D is a large-diaphragm condenser microphone, using a similar titanium capsule to sE’s T2 microphone, and is designed specifically for drums and percussion duties. The X1 D has a fixed side-address cardioid capsule, integrated switchable 10dB pad and high-pass filter. Because it’s built for use on high SPL instruments such as kick drums, the X1 D has a dynamic range of 170dB SPL, which is staggeringly high even when compared to similar dynamic microphones. 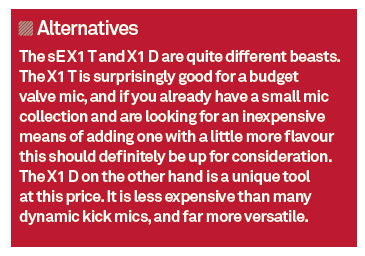 Unlike some microphones designed for kick drums the X1 D doesn’t have a great chunk of the midrange scooped out.

This makes it a far more versatile microphone, but also means you don’t get the instant modern kick drum sound. However, the X1 D does have quite a distinctive sound all of its own thanks to the quick transient response of the titanium capsule. This helps to capture the high-frequency click of the beater attack, along with the full-bodied bass of the instrument.

This decision to make the X1 D a full-frequency mic makes it far more useful as a generic percussion microphone. The fast transient nature means you capture everything, and whether it’s a cajón or a simple shaker the signal can be shaped as you require, without coming pre-shaped for a kick, and also means you can get a more vintage-sounding kick without much work.

In fact after hearing how versatile it sounds, we’d be interested in trying a set of X1 Ds on toms too. Well-balanced kick mics often make good bass guitar mics, and the X1 D is no exception.

It captures plenty of detail through the midrange with a good, strong low end. On slap bass the percussive nature of the instrument is crystal clear,.

In our discussions with sE they were keen to point out that the X1 D also makes a good rap vocal mic. So we set it up and tried our hand at rapping. The X1 D does actually make for a very high-quality vocal mic, with all of our vocalisations captured in terrific detail. This wouldn’t be our first choice for all rap vocalists, but for faster styles where every articulation has to be captured in incredible detail it would certainly make our shortlist.

Unlike the X1 T, the X1 D doesn’t come with any accessories, just an integrated mount. Again, if you want a shock-mount the sE Isolation pack can be purchased separately. Despite this, both microphones represent terrific value for money and sound great. 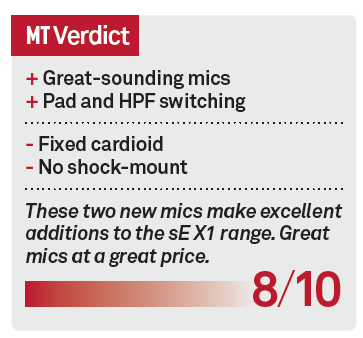