If you’re after a versatile cinematic instrument, a gamelan might not be your first thought. But it should be, as Hollin Jones explains… Details Price $399.99 Contact via website Web www.samplelogic.com System Requirements Kontakt 5 or Kontakt Player 5 Be honest, the prospect of a 14GB gamelan instrument doesn’t exactly have you jumping with excitement, […]

If you’re after a versatile cinematic instrument, a gamelan might not be your first thought. But it should be, as Hollin Jones explains… 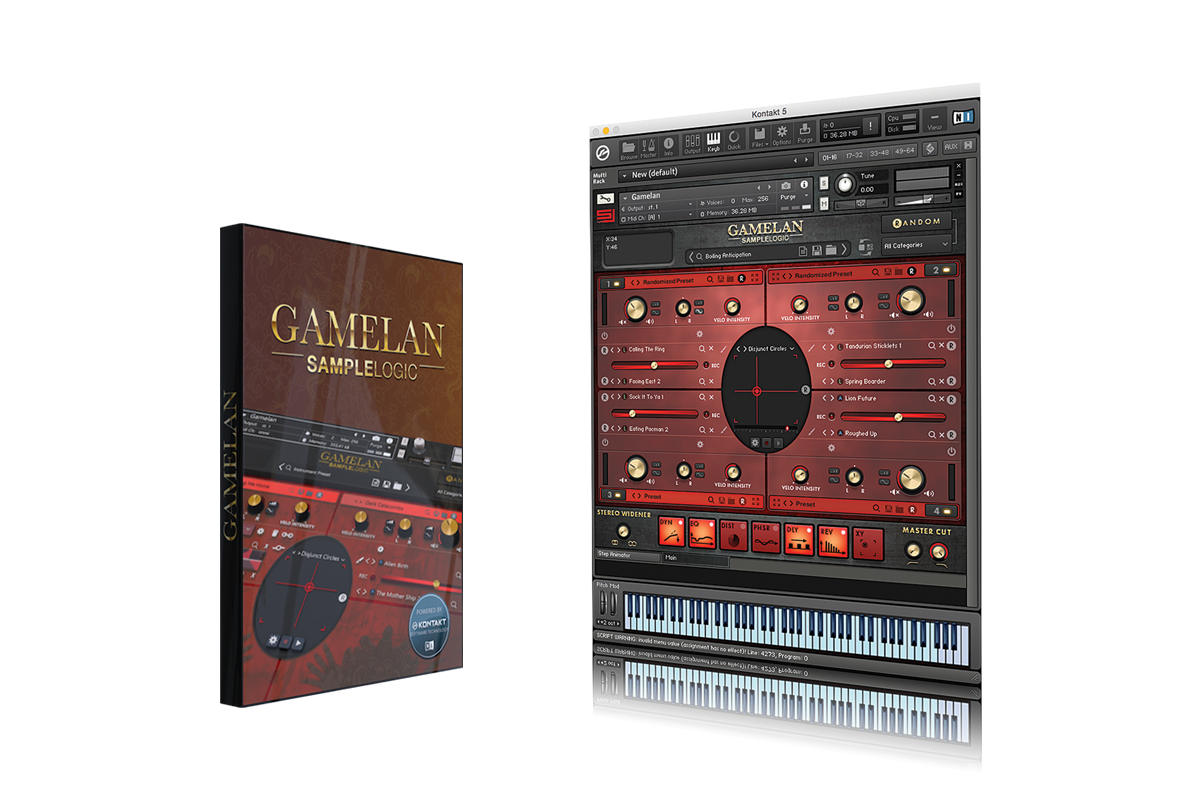 Be honest, the prospect of a 14GB gamelan instrument doesn’t exactly have you jumping with excitement, does it? Well, it may well do once you read a little more about how Sample Logic has combined sampling and synthesis with some of the most advanced Kontakt instrument design around to produce a real monster of a sound design tool.

The developer already produces a number of cinematic instruments, so it should come as no surprise that its formidable expertise has produced something extremely powerful indeed.

Before we begin, a few nuts and bolts. It runs in Kontakt or Kontakt Player Free, with all its associated system requirements. That is to say, standalone and all major plug-in formats.

You’ll need at least 14GB of disk space although it’s easy to offload the library to an external drive. The majority of that file size results from a combination of 25 different instrumental and percussive gamelan instruments that were recorded on the Skywalker Sound scoring stage. Were that the end of the story, this would probably be a niche instrument. Luckily however, it’s not.

What’s the Big Deal?
Drawing on the technology seen recently in the company’s Cinematic Guitars Infinity, Gamelan has a very powerful design that works entirely in a single Kontakt window.

The library itself contains just one instrument, and it’s inside that instrument the magic happens. There are two basic types of instrument: single core and multicore, both with a number of categories available. Single core instruments are simpler and enable you to blend between two sound sources, which can of course be chosen from the library. 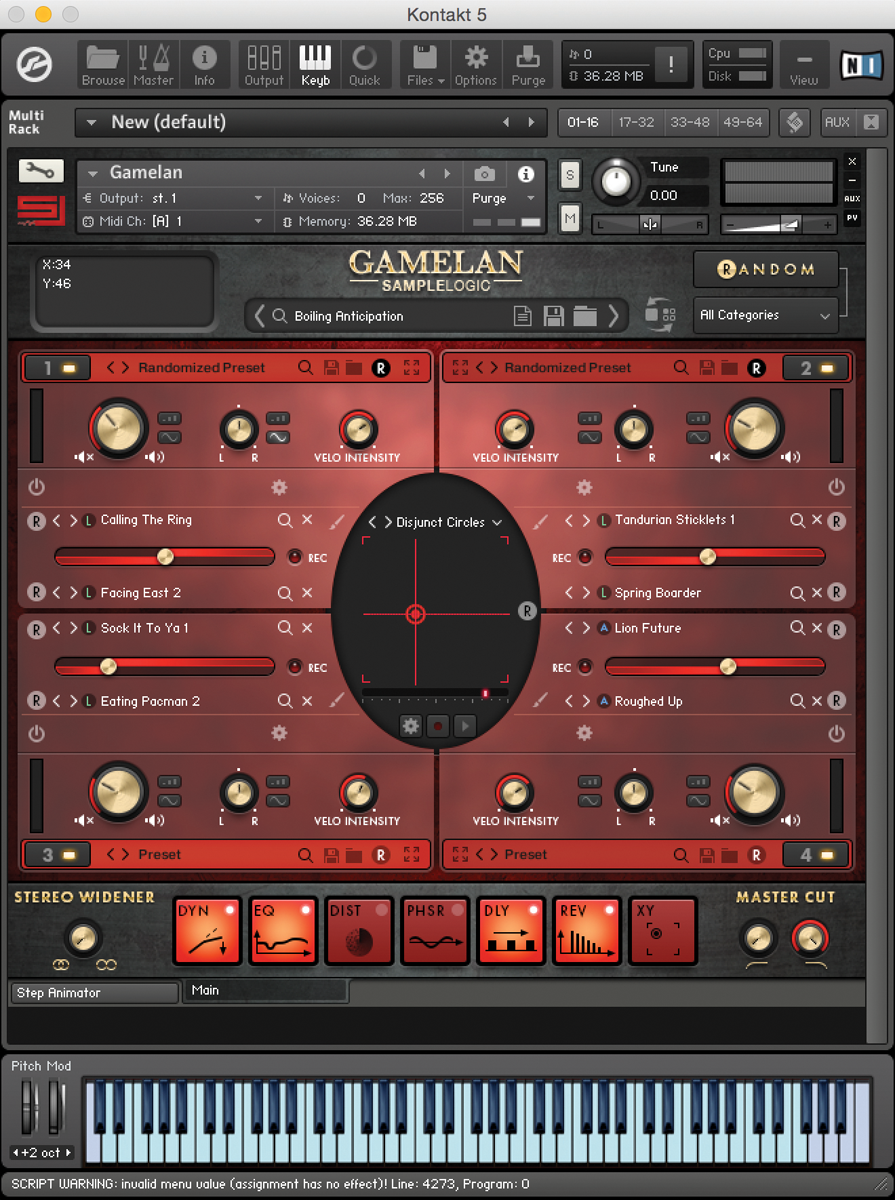 A “morphanimator” is available to draw curves to make the signal move between the two sound sources, with variable rates available. Further granular controls are available for each sound source too, such as an FX animator section with presets and randomisation, which can be switched on or off for different parts of each sound source.

Multicore mode is an expansion of single core, providing four different slots, each of which can load a single core patch, making a total of up to eight sound sources available at once.

Each of the four cores retains all the functionality it has in single core mode, so there’s a huge amount you can do in terms of layering and animating up to eight sounds.

As if that weren’t enough, a large X/Y grid in the centre of the screen lets you morph between the cores and this can be animated either using a preset or by recording your own actions. As elsewhere, a good selection of tweakable options make it possible to set this up exactly as you want. The master randomiser button can be used to inject new settings into any section with its randomise button activated.

There’s More…
Along the base is the effects section with seven great-sounding effects, each with its own set of controls plus a stereo widener and master cut dials.

Some of these have preset menus and there’s an effect X/Y section for changing the way in which the effects apply to the soundcores and to the master section. Click on the innocuous looking Step Animator button and you reveal a whole new section containing a fully-featured arpeggiator and sequencer. 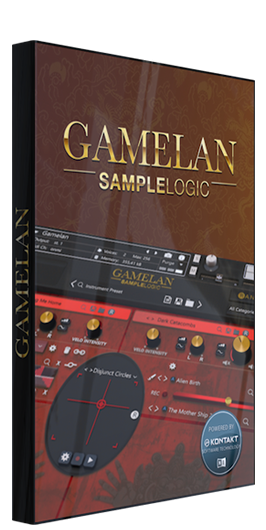 Using the Link/Alt mode, you can make the sequences apply to specific soundcores while leaving others unaffected. The result is that some will be rhythmic while others sustain, creating a far more interesting overall effect.

Again as throughout the instrument, presets can be loaded and saved here so if you have spent ages setting up a really cool pattern you can easily transfer it to another patch. There’s even MIDI drag and drop out of Kontakt of these patterns.

Game Changer?
Gamelan can do individual gamelan sounds really well, which is kind of a given. But it’s so much more than that thanks to the incredibly powerful system Sample Logic has built to let you tweak, layer and program sounds.

Just to clarify, you don’t need to be an expert to get great results, as the setup is commendably approachable for something so capable. If you desire, the depth is there to create unique textures and rhythms, and the randomise button is only ever a click away.

A quick scan of the online audio examples will reveal the cinematic capabilities of Gamelan. Many patches go so far beyond the instrument that lends its name to the collection that they’re barely recognisable.

There’s depth and movement, endlessly flexible rhythms, textures and atmospheres. Loops and motion mean things never get boring. Don’t be fooled by the name, there’s much more to Gamelan than meets the eye 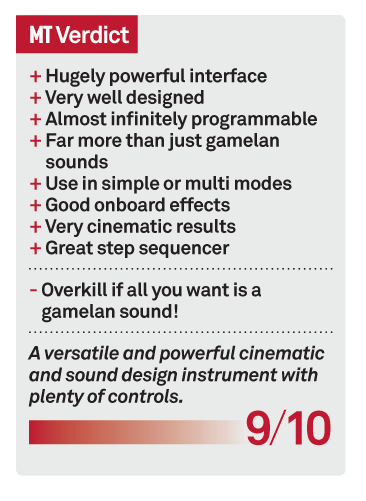