The Shelford Series takes the best elements of several of Rupert Neve’s designs and brings them up to date. Mike Hillier plays with the best. Details Price Shelford 5051, £2280; Shelford 5052, £2280; five-way PSU £690 Contact Sonic Distribution 0845 500 2500 Web www.rupertneve.com Amazon.co.uk Widgets The Shelford Series is named after the small town of […]

The Shelford Series takes the best elements of several of Rupert Neve’s designs and brings them up to date. Mike Hillier plays with the best. 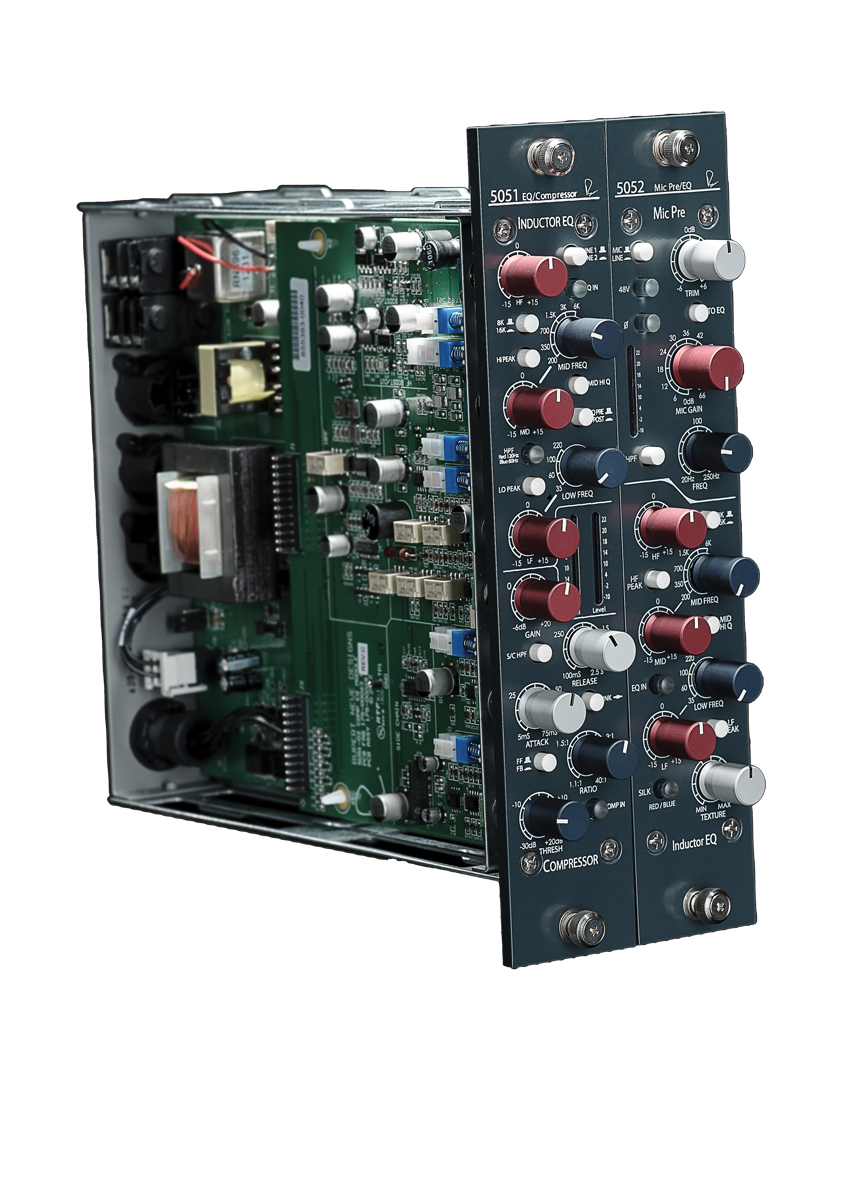 The Shelford Series is named after the small town of Little Shelford where Rupert Neve designed his early preamps and EQs, such as the 80-series, that went on to revolutionise the recording industry. Looking to these designs for inspiration, the Shelford Series hopes to bring together the best of Neve’s designs with modern components and techniques to generate what could be the ultimate Rupert Neve channel strip.

Blast from the Past
There are two modules in the Shelford Series: the 5051 EQ/Compressor and the 5052 Mic Pre/EQ. Both modules share the same three-band inductor-based EQ, which has been designed as a ‘best-of’ of Rupert Neve’s EQs. The low-frequency band is based on the 1064, which the company claims is best known for its creamy, resonant bass. The 1064 design is improved with the addition of a switch enabling it to be used as both a shelf and a peak filter.

The midrange is based on the 1073 EQ, one of the most revered units in the audio world. The 1073 was also part of the inspiration for the high end, borrowing the inductor design from the 1073 EQ with a more modern capacitor-based topology for more control. 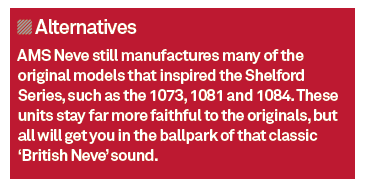 Again inspired by earlier designs, the mic preamp in the 5052 is a discrete Class-A circuit with 72dB of available gain coupled with custom-wound square-core transformers and the Red/Blue Silk modes from the Portico II series to add additional harmonic content. Although inspired by older designs this isn’t by any means a clone, and the design team at RND has worked hard to make this the best ‘Neve’ preamp yet. The mic preamp has a polarity invert switch, 48V phantom power and a sweepable high-pass filter, continuously variable from 20-250Hz.

The 5051 compressor section is similar to the VCA compressor design used in the Portico series. This design combines the feed-back nature of early Rupert Neve compressor designs, but also includes a modern, feed-forward option for faster attack times and more aggressive compression.

2+2=5
Both units can be mounted in the 5088 or 5285 consoles, which will also provide power for the modules. Alternatively they can be mounted in a separate enclosure – RND makes a two-slot standalone wooden enclosure or a nine-slot metal 6U rack. They will then need to be powered from an external power supply, and RND provide either a 2U 25-way unit, or a non-rackable five-way version designed to sit at the side or back of a rack. 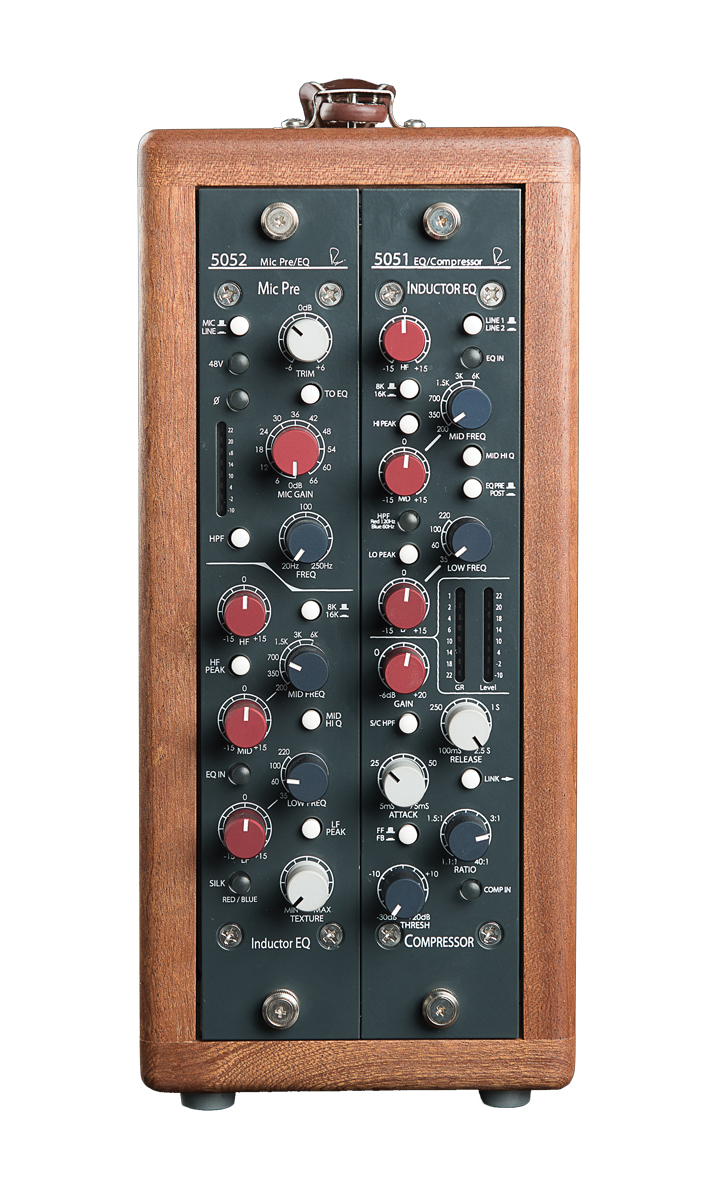 Why RND chose these numbers is a little less obvious. Running five modules would require half of a nine-slot enclosure to be empty, while getting a second power supply would then leave one port unused. Getting them to match up is tricky, and would prove very costly. Although of course there is no harm in not running everything at capacity.

A further look around the back of the modules reveals some extra interesting features. The 5052 mic preamp/EQ has both mic and line-level inputs as well as a dedicated EQ input to bypass the input stage entirely. Furthermore, as well as the main output the 5052 has an output immediately after the mic preamp stage. This means it is possible to run the mic preamp and the EQ simultaneously on different signals, or alternatively place a compressor before the EQ.

The 5051 EQ/Compressor has two line-level inputs, which you can switch between from the front panel, making it easy to hardwire the 5052 into the 5051 while also keeping the other input wired to the patch bay should you wish to use just this module. There are also ¼in TS sidechain send and return points, and ¼in TS Link ports for linking two 5051 modules together for stereo operation.

Studio Success
We were provided with the two-slot wooden enclosure and the five-way power supply, and sat next to each other in the enclosure the two modules make a formidable channel strip, with the 5052 and 5051 providing a mic preamp running into a three-band EQ, into a compressor, and back into another EQ.

Before hitting any of the additional options we ran the mic preamp clean to gauge its qualities. It was pretty obvious very quickly that this was something a little special. The acoustic guitar we were recording instantly sounded larger than life, the low-end was forthright without being woolly, while the top end sparkled without feeling artificially boosted. We engaged the HPF and dialled it up to around 60Hz, which further tightened the low end and left us with a signal that on its own sounded superb.

In a sparse mix this may be all that you need, but in a more dense mix this guitar would probably sound a little big. So we engaged the EQ and within seconds we were able to pull out a little of the low end to thin out the guitar and leave more room in our arrangement, while a slight cut in the top end, shelving down from 8kHz, helped to place the guitar in a fixed space in the spectrum.

On vocals, the larger than life quality of the Shelford 5052 preamp is ideal, and we were able to add a little more life to the vocal by lifting the top end and then running it into the 5051 compressor. This enabled us to sit the vocal really easily into the mix, with very little post-processing.

For our final test we set our sE RNR1 ribbon mic about 4ft in front of and at 90º to a drum kit, and used the Shelford Series preamp and compressor to achieve a sort of pumped room sound. Because the mic is a figure-of-eight pattern, with the null pointed at the kit, it should only pick up the room reflections and not the direct signal.

We decided to let the compressor do a fair amount of work and dialled in quite a slow attack to let most of the punch through but fast enough to catch the body of each beat, and a fast attack so it’s released before the next hit. We then dialled the threshold down to produce around 6-10dB of gain reduction on the meter. The result was a huge sound. The kick and snare sounded enormous, while the hats dropped back a little. Unlike similar tricks using FET compressors such as the 1176 there wasn’t an obvious sense that the picture was being saturated, just that it was being pushed forward.

The Shelford Series modules pay homage to the past works of Rupert Neve without exactly recreating any of them. It’s encouraging to see the company continuing to develop and design when it would be so easy to rest on the laurels of past successes. The two Shelford Series modules easily stand up as two of the best works yet created by Rupert Neve and would be welcomed into any studio around the world.

While we would love to have a 5088 console packed full of these the expense may be too much, but we can see plenty of studios buying one of each module and using them as a deluxe channel strip, especially smaller project studios that may only need one preamp, but want one of the highest quality. 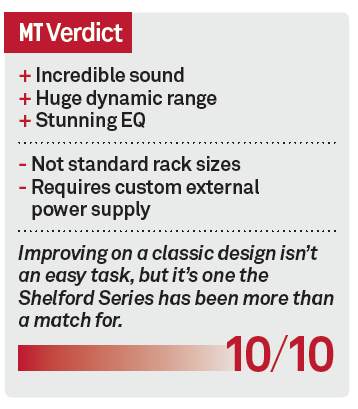 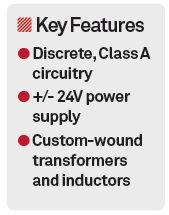