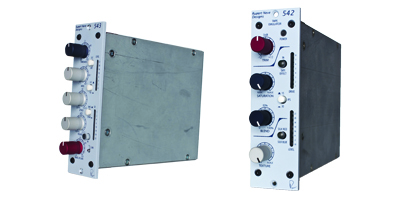 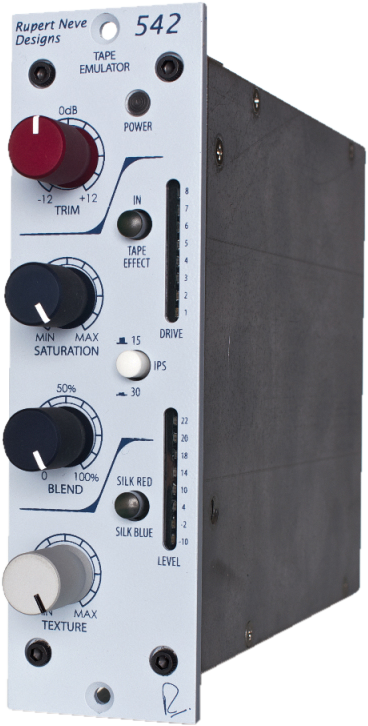 Rupert Neve Designs has dived head first into the 500-series arms race with a six-slot rack and five modules to fill it. We looked at the two preamps in the RND 500-series range a while back, concluding that they were “incredible sounding”, so it is with high-hopes that we set off testing the 542 tape emulator and 543 compressor.

542
The 542 tape emulator attempts to recreate the (now discontinued) Portico 5042 unit in a 500-series module, enabling you to quickly colour your signals either as they are recorded, or to run signals out and through the 542 in mixing to give the impression you have tracked and mixed to tape.

This also reduces the gain of the circuit, counteracting the initial drive, and maintaining unity gain through the circuit. The pre-emphasis/de-emphasis and transformer circuit combine to produce 3rd harmonic distortions and subtle soft-clipping compression characteristics, as exhibited by real tape machines.

The circuitry also includes a low-end EQ boost to emulate the “head bump” and a high-end roll-off, the exact nature of which is determined by the tape speed. This can be set to either 15 or 30 IPS. The 15 IPS mode produces a boost around 60Hz, and a slight roll-off in the top-end beginning around 5kHz. The 30 IPS mode has a higher low-end bump, around 120Hz, and also a more noticeable low-end cut below this.

However, the top-end is smoother, with the high-frequency roll-off largely outside of the audible spectrum. Once through the “True Tape” circuitry, the signal can be blended back with the dry signal, before being passed through Rupert Neve Designs’ Silk circuitry.

The 542 has two Silk modes, Blue and Red, which reduce the negative feedback on the output transformer, adding more harmonic content as the Texture knob is dialled up. Blue mode concentrates the additional harmonic content in the lows and mids, while Red mode
pushes the content into the mid- and high-frequencies.

543
The 543 compressor is essentially one half of the Portico 5043 stereo compressor, and should you have two 543 modules, they can be linked to provide the full functionality of the 5043. Both units are built around a fully-featured modern VCA compressor, with transformer coupled I/O and up to 20dB of make-up gain. 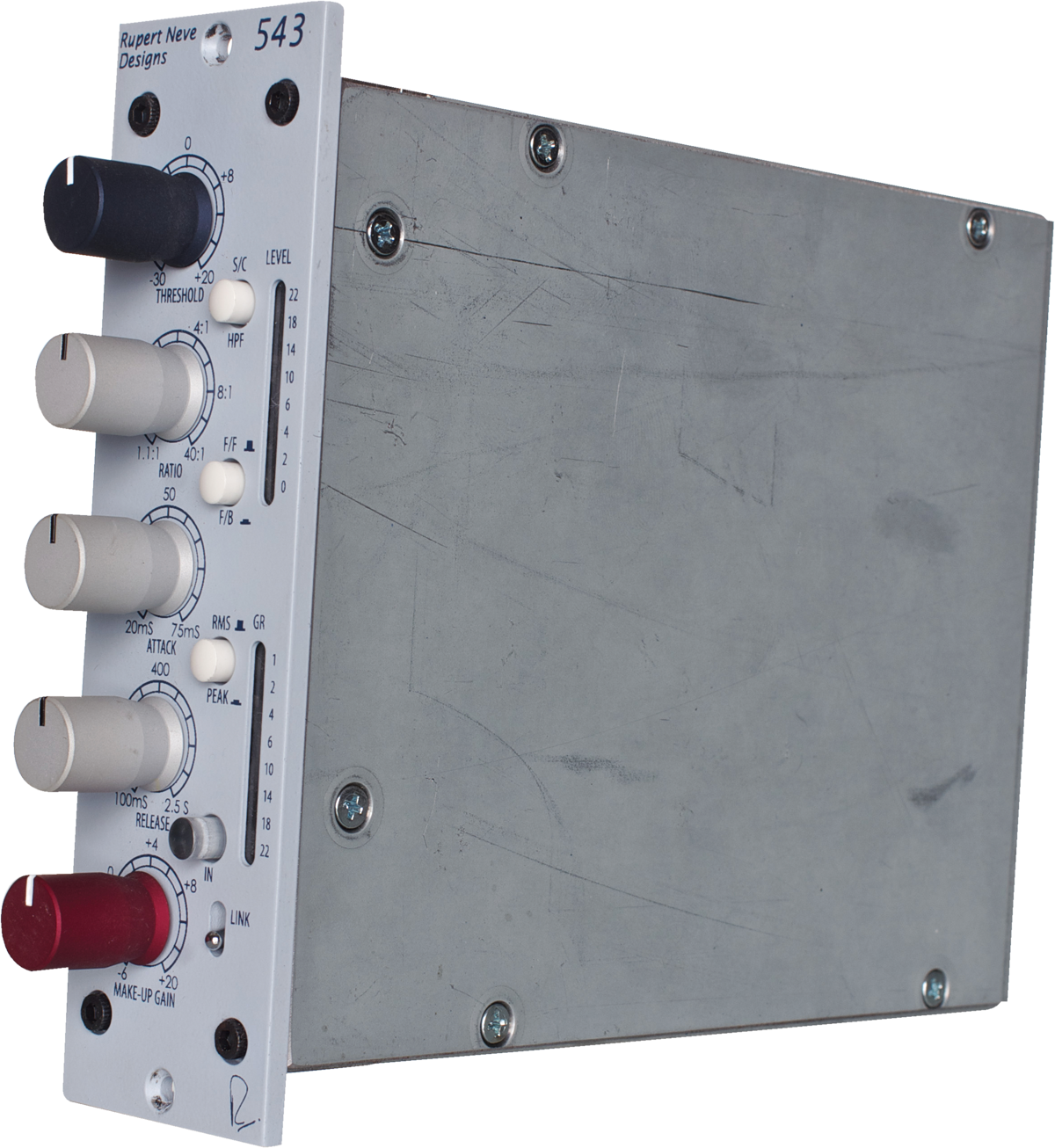 Unlike the 5043 however, the 543 has two VCA detection modes; Peak and RMS. Linking of two or more 543 compressors is possible using the “Link Buss” built into some 500-series racks, or by using a jumper wire between the units.

In Use Tip
Unlike a real tape machine, the 542 tape simulator can be added across the mix buss right from the start of the process, enabling you to mix into the saturation, as if you were tracking each pass down to tape.

With a real tape machine you would be adding the effect only on the final pass to tape, monitoring off the repro head to be sure your mix wasn’t changed too much by the process.

5, 4, 3, 2, 1
For our first tests we set the 542 and 543 up in series across a vocal recording chain, which also made use of the 511 preamp. With the compressor in Feedback mode and set to RMS detection we were able to quickly get a more even performance, smoothing out any imperfections in our vocalist’s mic technique, with the tape saturation adding a subtle distortion, which made the voice sound clearer.

Switching between the 15 IPS and 30 IPS modes can be quite eye-opening. The 15 IPS mode was notably darker and the head bump wasn’t giving our vocalist anything extra. Switching to 30 IPS, and the air around the vocal lit up, while the head bump helped to give the low end a little extra weight.

However, we had opted for a fairly dark microphone for our vocalist, knowing that we wouldn’t want much top-end in the final mixdown. With brighter microphones, the 15 IPS mode may be the perfect complement, bringing some control to a rather brittle top-end.

It’s important to note that the saturation from the 542 is subtle. Even driven fairly hard with the Texture knob at 100% this is subtle enough to be used on a “clean” recording. You’re not going to get any kind of real lo-fi grit or cassette tape sounds out of this unit, but there are plenty of ways of achieving that, from plug-ins to guitar pedals and even amps.

What the 543 does is bring the sound of analogue tape to your system without the need to keep an enormous tape machine properly serviced, or the costs associated with reels of tape. In a world of DAW recordings, super clean mic preamps and convertors, the ability to add back even just a little analogue saturation, fully under your own control, is enlightening.

Comparing the signal (with the 542 bypassed) with the 517 preamp and optical compressor built-in, the differences between the two compressors becomes quite clear.

The optical compressor in the 517 is a great vocal preamp, bringing up the overall RMS level, but it has a slow attack, which means it isn’t great at grabbing hold of transients or dealing with them.

The 543, however, can be set up with a very fast attack and release to deal solely with transients, leaving you with plenty of headroom when tracking, and the option to bring up the overall level with a slower compressor later.

Alternatives
Both the 542 and 543 take their lead from the Portico series of half-rack units. So if you don’t have a 500-series rack you can still add these circuits to your studio.

If you want to stay within the 500-series we’d suggest you also look at the DIYRE Colour module, which is a modular saturation tool, with a number of modules offering a variety of ways to colour your audio similar to the 542 tape simulator.

While Colour has more variety it doesn’t have quite the same level of attention to detail as the RND 542. So if you are sure it’s tape saturation you want, then the 542 is likely to still be the way to go.

Racking up
The 542 and 543 modules would make great additions to your 500-series rack. The 543 compressor has plenty to offer, but is probably the easier of the two to ignore, as there are plenty of alternative VCA compressors in the 500-series format.

However, there aren’t all that many saturation tools similar to the 542 tape simulator, and whether you are tracking, mixing or mastering, the ability to dial in as much or as little extra magic, just as you need it, could change how you work. 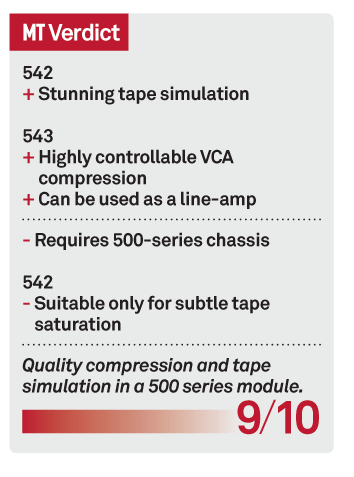