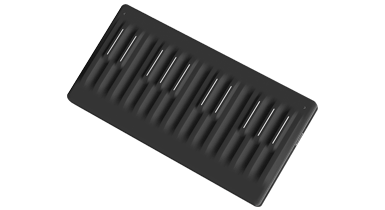 ROLI’s Seaboard Block brings the company’s two lines of hardware together. But does it provide the perfect mobile music solution, too, asks Andy Jones? 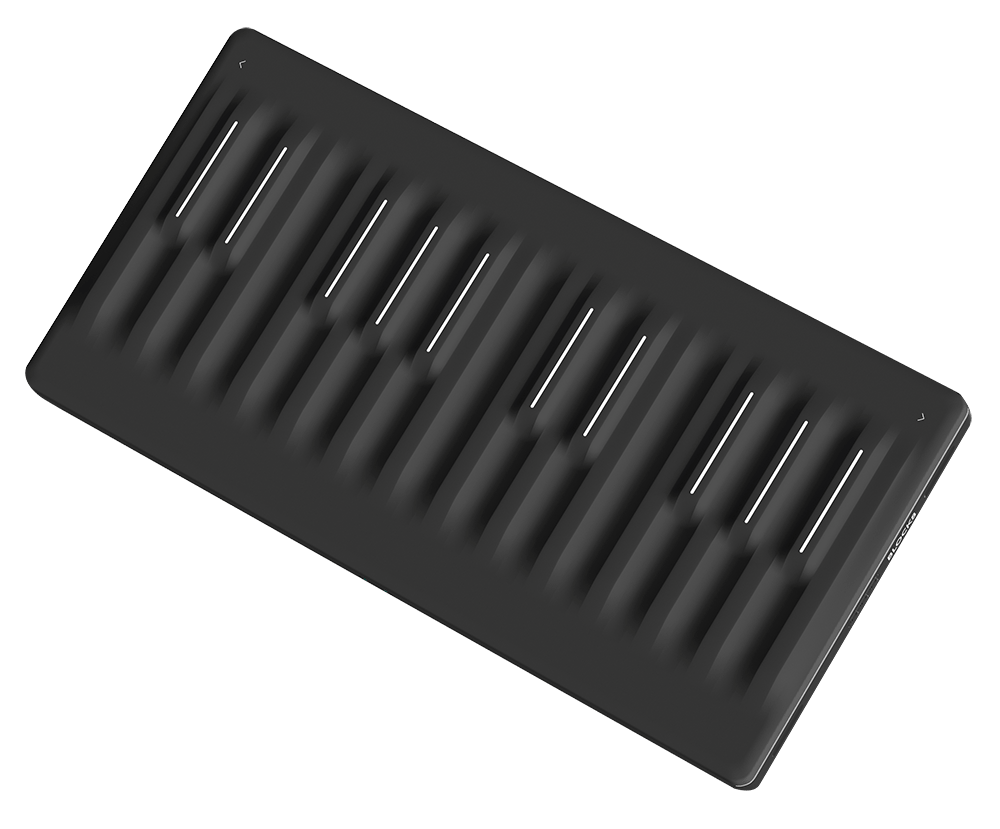 A few issues back, I looked at ROLI’s Blocks, a set of musical devices that act as modular music makers and are designed to open up the world of music making to the masses in a well designed and ingenious way. I’ll talk more of those shortly, as Seaboard Block is designed to integrate with that system, but it also derives from the other ROLI hardware strand, the Seaboard RISE.

RISE, for the uninitiated, is a keyboard like no other. It features Keywaves, which replace standard keyboard keys. You get 12 per octave as on a regular keyboard and you can even play them like a regular keyboard – but you’d be missing out on a few extra dimensions, because what makes RISE stand out is the way you play it. With ‘Five Dimensions Of Touch’ you can Strike, Glide, Slide, Press and Lift keys, adding several new layers to your playing and performing.

Strike is like hitting a regular note with different velocities; Press gives you aftertouch; Glide left and right allows glissando changes between notes; Slide up and down lets you assign parameters to how you move your fingers up and down; and finally, Lift Off can change another parameter as you release the note.

With these dimensions, sounds can be warped, pitched, and moulded in pretty much any way you like; and these sounds come from either the Equator soft synth, which runs as a regular plug-in, the ROLI Noise app (one that runs on iOS via Bluetooth, if you wish) or any compatible soft synth. By ‘compatible’, we mean that it has to respond to these extra dimensions via MIDI, so has to be MPE (Multidimensional Polyphonic Expression) compatible.

So, the Seaboard concept allows you to create very different-sounding performances or incredibly real acoustic sounds (you should hear the saxophone in full flow, for example), all played on a keyboard-type instrument. 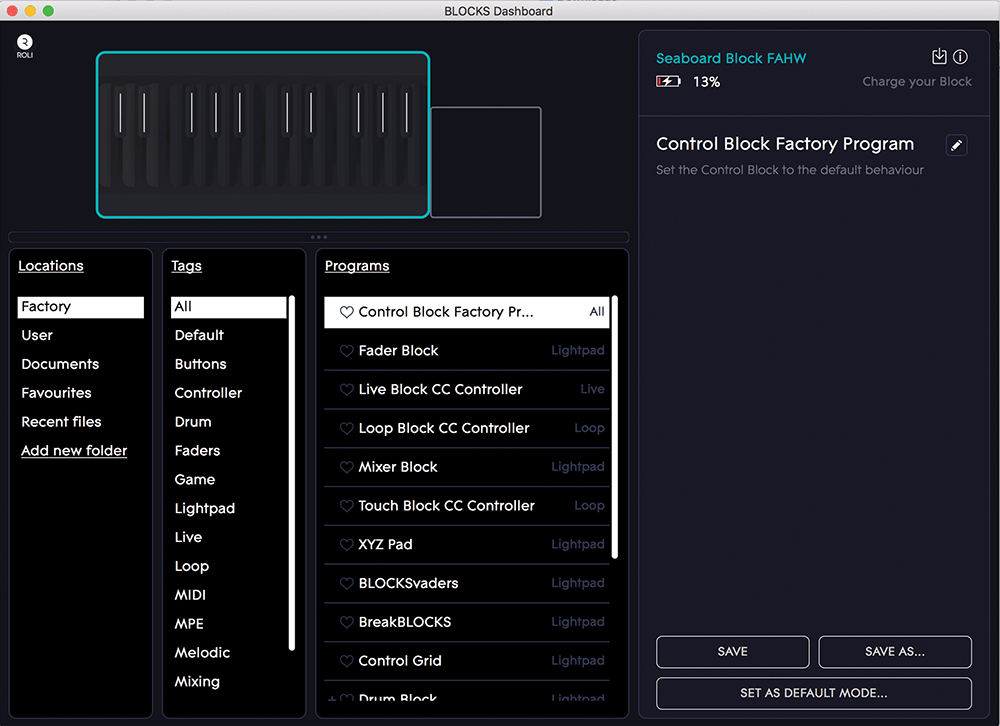 Then there’s ROLI’s Blocks. This more mobile concept adds the multi-dimensional touch philosophy to a wireless modular setup that you configure yourself. There’s a Lightpad Block, the central performance module; a Live Block, also aimed at the performer; a Loop Block, aimed at the producer and a Touch Block, which allows you to edit the amount of multi-touch expressiveness.

Again, all of these Blocks use the Noise app as their sound source, which has two modes: Song View, where you play and record loops to make songs, and Instrument View, to play individual sounds across four tracks to make music (drums, bass and two synths).

The new Seaboard Block, then, is obviously part Seaboard and part Block and should bring the Seaboard concept to a more mobile environment for a lot less cash. I’m looking at the unit in three different ways, then: as a cheap, mobile Seaboard, as a controller and as part of the Blocks setup.

What’s in the Blocks?

After registering, I was presented with a bundle of download software including Tracktion Waveform – the rather excellent DAW I reviewed last issue. The ROLI software includes a 2GB suite of 200 extra sounds for Equator (and the Equator software itself) and the Blocks Dashboard software, to configure your Blocks and Seaboard Block into whatever control setup you want.

I first tested Seaboard Block as a kind of cut-down, mobile Seaboard, using it as a super-expressive controller that you could take on the road. Used in this context, Seaboard Block is as impressive as the originals. I reviewed two full-size Seaboards (the 25 and 49) and, while obviously smaller, this unit doesn’t actually feel that truncated. The keys are very playable and the unit feels as solid, as squidgy and as well built as the grown-ups.

If you were at all attracted by the original Seaboards for all of their expressive control – but were maybe put off by the price – £279 gets you a very capable and portable version.

Keyboard players might need time to get used to the extra dimensions at their fingertips here – it’s easy to over-glissando, for example – so, as ever with a Seaboard, I’d urge them to give one a go before buying, or allow some bedding in time when learning to use it.

Used in the Blocks environment, Seaboard takes centre stage, with the other Blocks clipping to it to all sides, top and bottom. It is three Lightwaves wide and a Lightwave plus a Live or Loop Block high, so they all fit together perfectly well, design-wise, and it really is something to behold when it’s all connected and running. You can use the Seaboard to ‘play’ Noise and record riffs and, obviously, all the dimensions are performed and recorded, too.

Anyone who read my original review of the Blocks system might well recall that I was a little too excited about their potential as DAW controllers. ROLI has designed them so you can reconfigure them into MIDI controllers for DAWs, so you could, for example, use a chain of the Lightpads as fader controllers. It’s an expensive solution, but a bloody cool-looking one. Seaboard Block obviously fits well with that concept as well, because it can sit within the Blocks environment as the keyboard part.

You do have to make a choice here,though. As I was experimenting with using Seaboard Block as a controller and then as part of the Bluetooth Blocks environment, it would either do one or the other. So when Noise was booted up on my iPhone, for example, it would stop Seaboard Block from acting as a MIDI controller. I couldn’t then trigger both Blocks and my soft synths at the same time – just one or the other (this is probably asking a bit much and does read back as a very first-world problem, on reflection!). 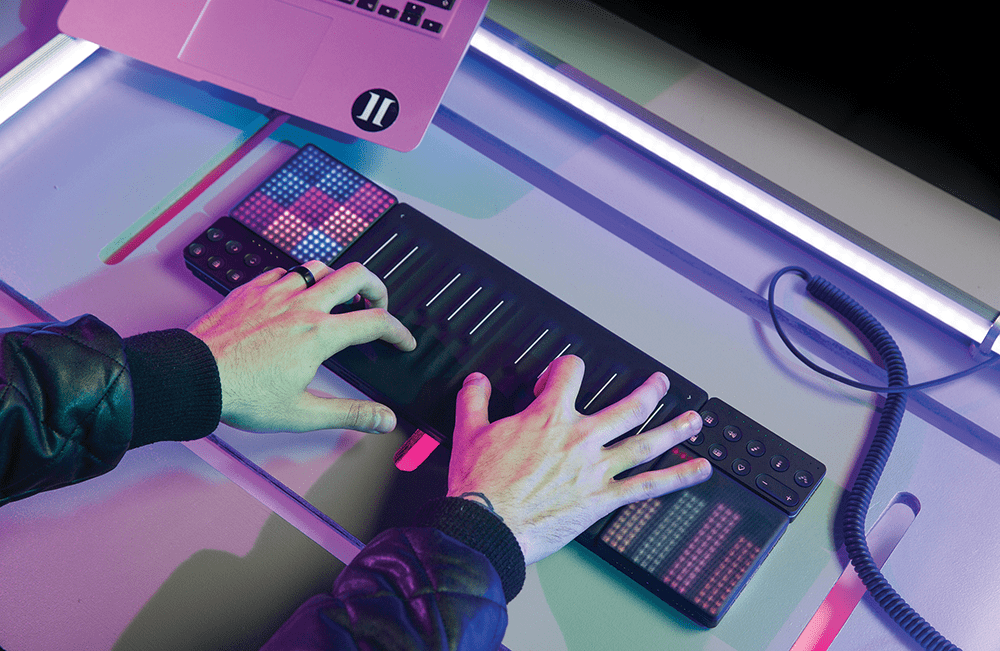 You’ll need some kind of Seaboard if you want to explore all of the sonic performance options that MPE-based instruments offer, and this is the cheapest. If you just want to play regular synths, you can make do with a regular keyboard, but these things do push a boundary in sound well worth exploring.

So where are we?

I’ve possibly tried to do too much elsewhere with this review as well, by considering all the possibilities of Seaboard Block and possibly muddying the water a little. I know that ROLI simply wants people to make music with Noise and Equator on the move, simple as. But actually, I love Seaboard Block more as a great quality controller and something to maximise my use of the excellent Equator synth.

It sits well on my desktop and is a brilliant interface between me and my DAW. As part of Blocks, I’m not sure you’d absolutely need it if you are a ‘Block head’ music maker – you can make do with the Lightpad Block for playing and recording. It does, however, make entering that Block world easier if you’re a traditional keyboard user like me.

So I’m perhaps more ‘Seaboard’ than ‘Block’ – more greying stubble than well-groomed facial hair – but I do like Seaboard Block a lot. It’s solid, it’s cheap, it brings those extra dimensions of touch, and can be a great central component of the Blocks DAW control setup. And with more developers going MPE – adding control functionality to their soft instruments which requires the extra dimensions to access them – this is easily the best way into that world of sonic manipulation. 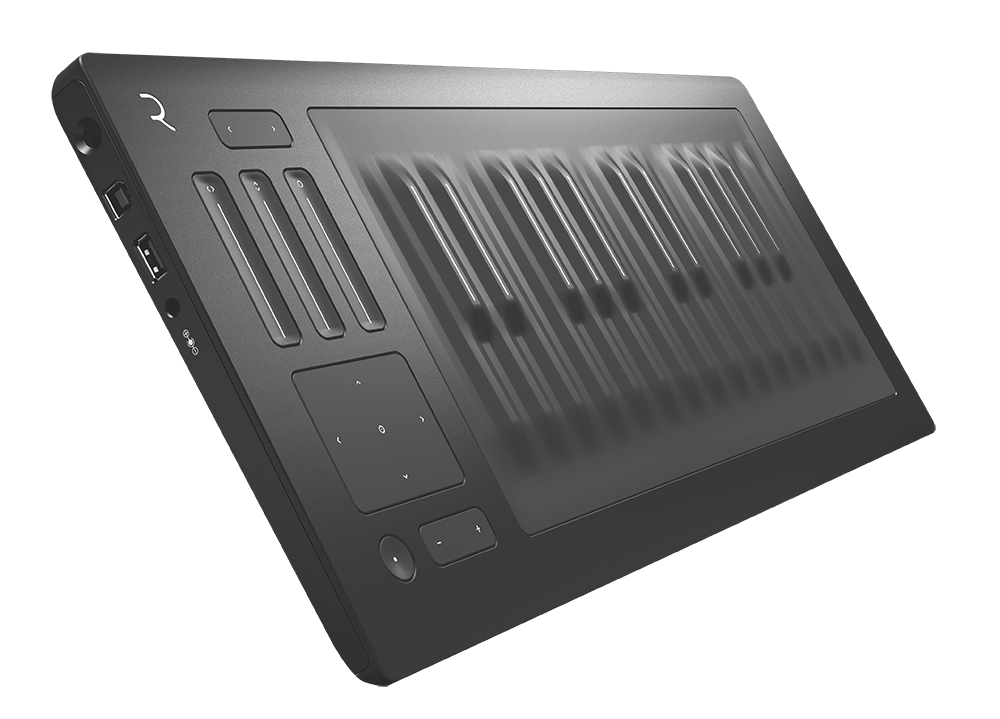 In order to get that Seaboard Block keyboard action the only real alternative is another Seaboard. They come in three sizes but the most compact is the 25 and for the extra cash you’ll get a full sized keywave bed. 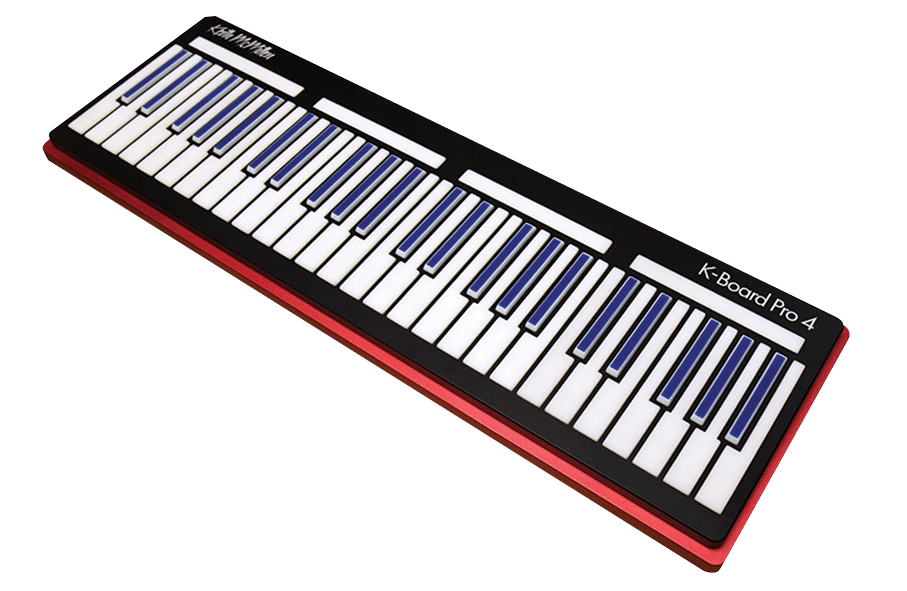 This beaut was announced as a Kickstarter product a while ago but the website is now taking preorders. The advantage here is that you get all of the MPE action but with a more traditional keyboard to keep the purists happy.