Roland’s reimagined take on its classic drum machines has been overhauled to offer more beats for your money. We take a nostalgic beat journey. 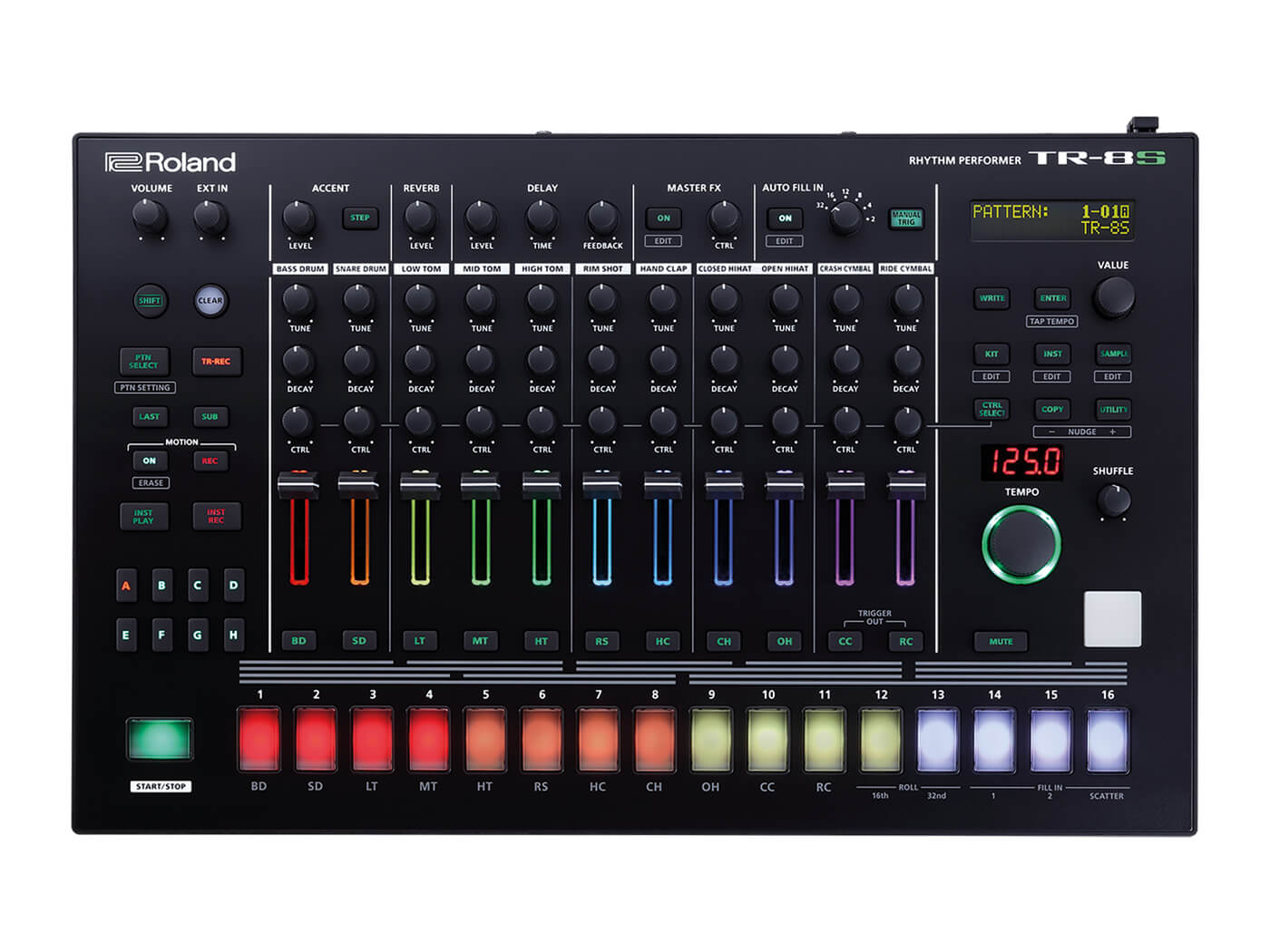 It’s been a while now since the glory days of the launch of Roland’s AIRA range. I don’t think I’ve ever witnessed such excitement in music-production gear history since the Japanese giant launched reimagined versions of its TB-303 and TR-808/909. The secrecy behind the launch was incredible and the rumours reached fever pitch just before the big announcement.

Those days are far behind us now, though, and since then, we’ve witnessed dozens of new Roland releases based on its classic synths and drum machines. What is AIRA and what is not has become slightly confusing, so I’ll not even attempt to clear it up. But back in the day, AIRA was mostly about that reborn TB-303 – the TB-3 – and the TR-8, a new version of the 808 and 909. The Performer TR-8S is an update of the latter. The ‘AIRA’ name is rather hidden now, but AIRA or no AIRA, this is still quite an update.

The original TR-8 was quite a beast. Not cheap, by any means, but to my ears, it did a great job of capturing the original fun and sound of the classic 808 and 909 drum machines. Programming and twisting the sounds was incredibly rewarding and Roland heaped on a pile of modern jittery effects just to give it more relevance to a 21st-century audience.

The TR-8S adds a lot more. The drum machines it now emulates by way of Roland’s rather good Analogue Circuit Behaviour (ACB) modelling include not only the 808 and 909, but also the 606, 707 and 727. You can load in different samples from a large Roland library of 300 sounds or your own should you wish, via an SD card, in WAV and AIFF formats. These can replace up to 11 sounds per kit, spread across 11 channels each with controls including volume fader, tuning and decay.

It’s dead simple to replace the sounds in a kit; simply hit the BD, SD or whatever of the 11 kit sounds you want and dial through the 300 options available. Selecting the kick will start you in the kick folder; the clap will set you up in the claps, and so on. The unit also offers six dedicated Outs which give you a lot of routing flexibility and its USB audio connection extends that flexibility to your DAW, too. 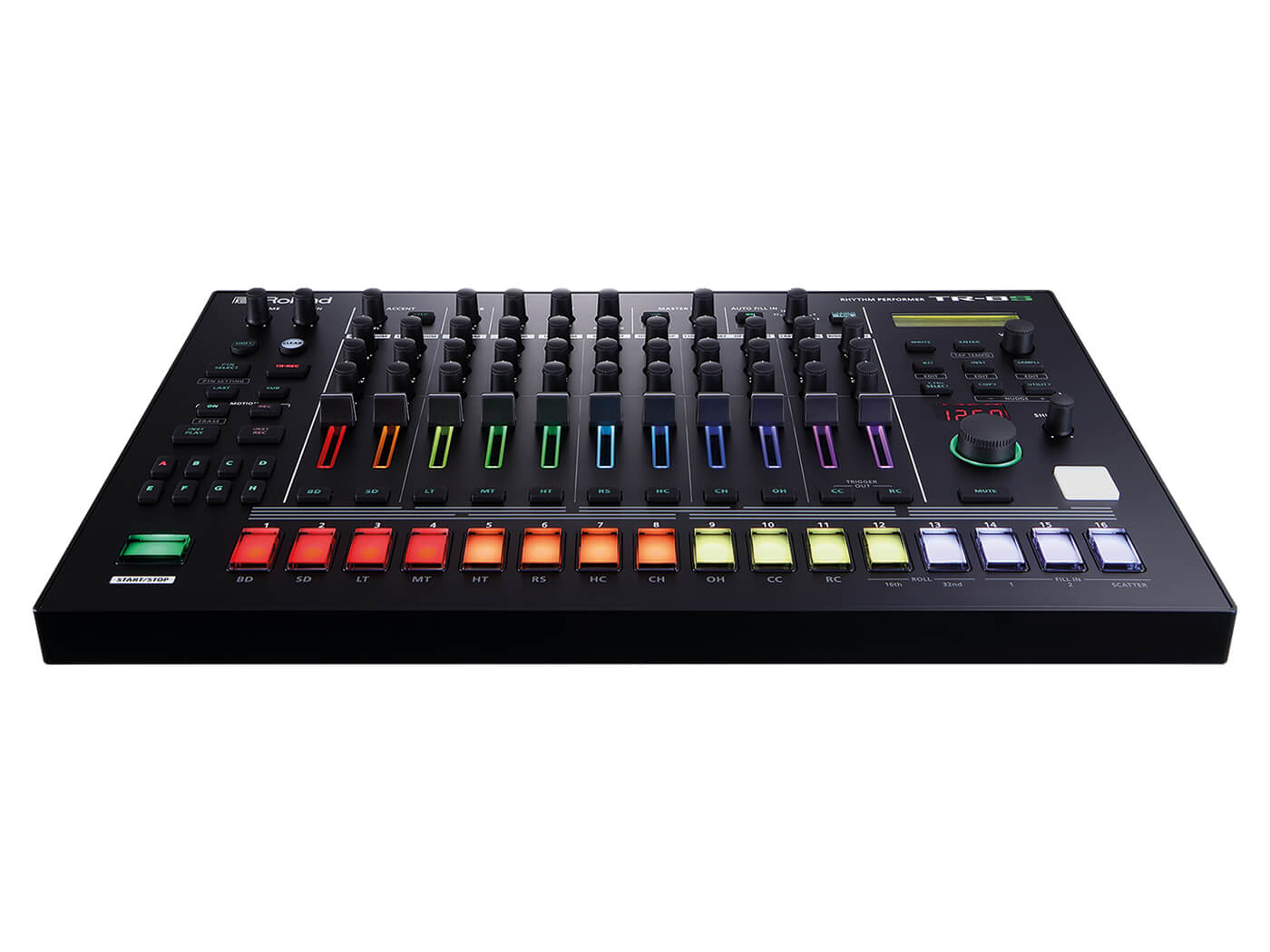 So, to powering up 8S – and you quickly realise that this is a very different beast compared to the original. The additional ‘S’ makes you think that TR-8S just an update but, really, this is a new build. There are 128 patterns to start with, selected via the 16 pad buttons and eight banks, or by stepping through on screen. Each pattern has up to eight variations, selected via the A through H buttons.

Where the original TR-8 was really about dance with a heavy techno leaning, these patterns are about just about everything you can imagine, with many genres covered. You get a heavy street/hip-hop presence, plus some quirky and indescribable ones. There are still some good, stripped-down techno ones and some very deep house presets, too.

Many of the patterns are also more about showing off TR-8S’s more melodic side by introducing stabs and sound effects into the mix. Overall, it paints a much more varied sonic picture than its predecessor, as you would expect given the expanded palette of ingredients, but also with many patterns you might not expect.

Fortunately, the extras have not got in the way of programming patterns and it’s as easy to step-record as ever. Simply select the sound you want to program from the 11 kit sounds and then use the familiar step-sequencing approach for placing beats across patterns, copying, pasting and deleting said patterns and also programming flams, weak beats and more. Instrument Record mode also lets you record individual sounds where you want them to play in real time, rather than inputting step by step.

Velocity programming can be done in a couple of ways, the easiest being holding the Shift button and stepping through different velocities per beat, with brightness indicating the level. You can also record machine-gun-style Sub Steps – kind of programming between beats – so you are not limited by the step values.

Rest assured that all of the tuning and accenting of sounds – where the ACB detail really comes into its own, as you smoothly transition each beat across an extended range – is still present. Also, much of the motion you perform on dials can also now be recorded as automation, which adds a whole new level of dynamics to the sounds and patterns.

Fans of the Scatter effects of the original won’t be disappointed, either. These digital effects were a bit Marmite and in-your-face on the TR-8 and I did state in my original review that they might become a little dated. They’re here and you get dedicated Fill In variations plus Scatter effects that can apply to any variation bar the first – but to my mind, they’re perhaps less prominent here, which is probably a good thing.

Indeed, there’s a greater emphasis on other effects that can be programmed within each kit, so you can add delay, snap, reverb and a lot more to sounds should you wish and be as subtle or dramatic as you like. In fact, this is a real strength of 8S over the original which, from memory, didn’t offer nearly as much.

Kits-wise, you get 128 different ones (with a number of non-filled user locations) which can be altered on each pattern, so it’s easy to find a well-programmed pattern and completely change its attitude and genre just by loading in a new kit or sound per part. The Shuffle control also offers a surprising amount of variation for each pattern, too.

With all of these extra patterns and the much larger range of kit sounds available, TR-8S definitely delivers a lot more variation than the original. This may be seen as more of a scattergun approach but really, it’s more what you make it and the flexibility is there to make this a drum machine for whatever style of music you make. I can see it being used in a huge variety of beat-making scenarios, with users very much customising it to their needs – it’s so easy to do so, after all.

TR-8S certainly retains all the great programmability of the original and it exceeds that unit’s performance potential – this is a great live drum machine. However, it is rather less about directly competing in the authenticity stakes with the original drum machines. You do get a very good emulation of those originals, but a lot more besides – 8S is about expanding the drum-machine remit into all sorts of different beat areas.

So it’s providing all of your beat needs, rather than just those vintage ones, and I’d argue that if you just want the classic tones, you’d probably be better off with Roland’s Boutique TR-08 and TR-09 – you could buy one of each for the costs of the 8S. Which leads me neatly to that cost issue.

A shade over £600 is expensive (the original TR-8 was pricey at £499) especially when compared to something like the DrumBrute (see below). However, TR-8S, like I hinted at above, is a now a hugely flexible drum beast. There are more effects, more sounds, and more of what you want a drum machine to be.

It’s a lot more than ‘just’ classic Roland beats and you do get a lot of drums for that cash. More importantly, you can quickly twist and turn this machine into whatever you want it to be.

It’s always nice to own a hardware drum machine – adding notes live or step sequencing beats drawing notes on your computer screen any day. However, you have to ask yourself what you’re going to use it for, because shelling out £600 on something you can do in software may be questionable. But if you want performance and flexibility, Roland’s TR-8S is hard to beat. 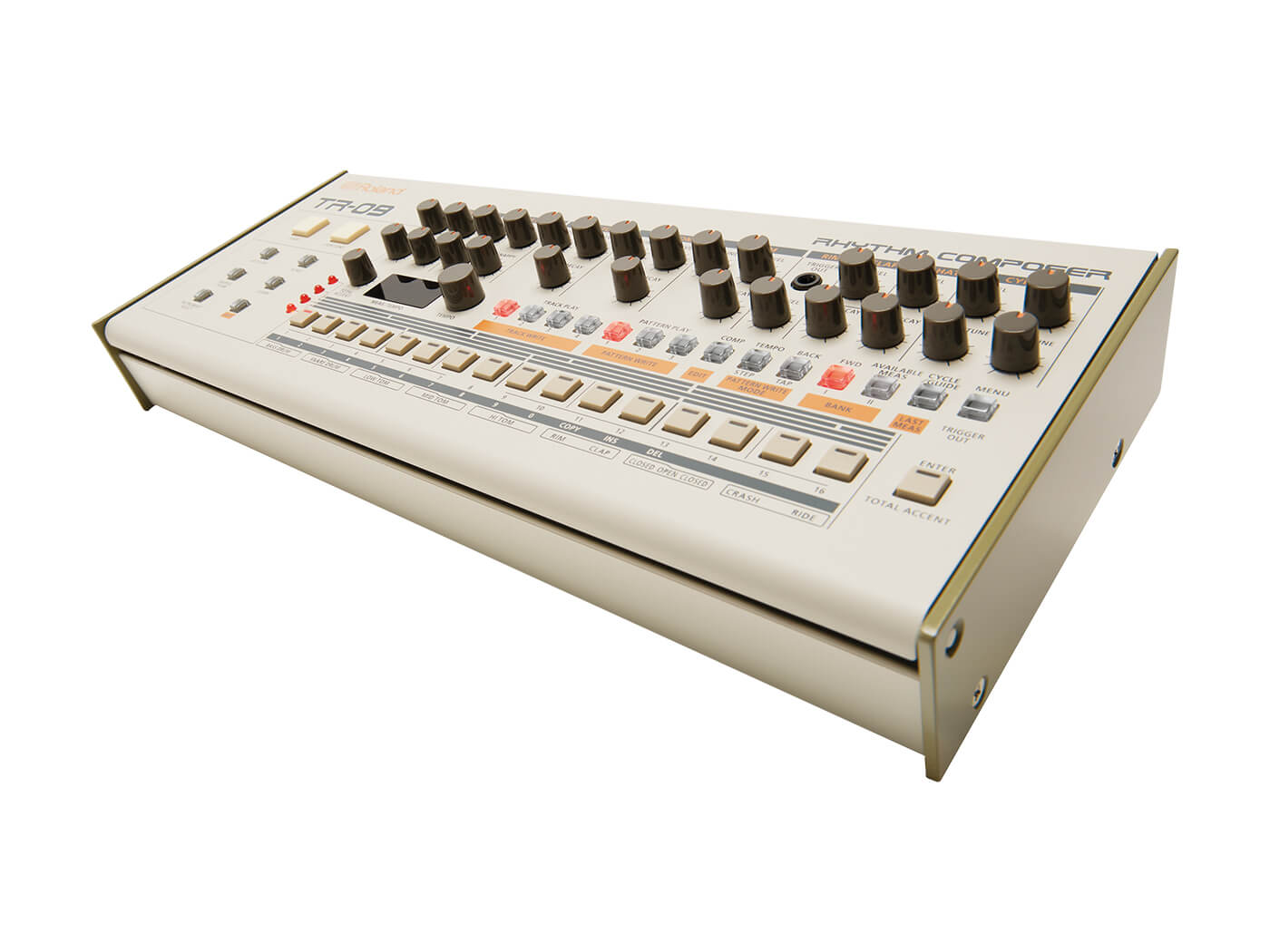 Sometimes, you do feel Roland is competing with itself on some levels, but the Boutique TR-08 and TR-09 offer all the original sounds and ease of use for much less cash. They are small and the TR-08S’s remit is much bigger. 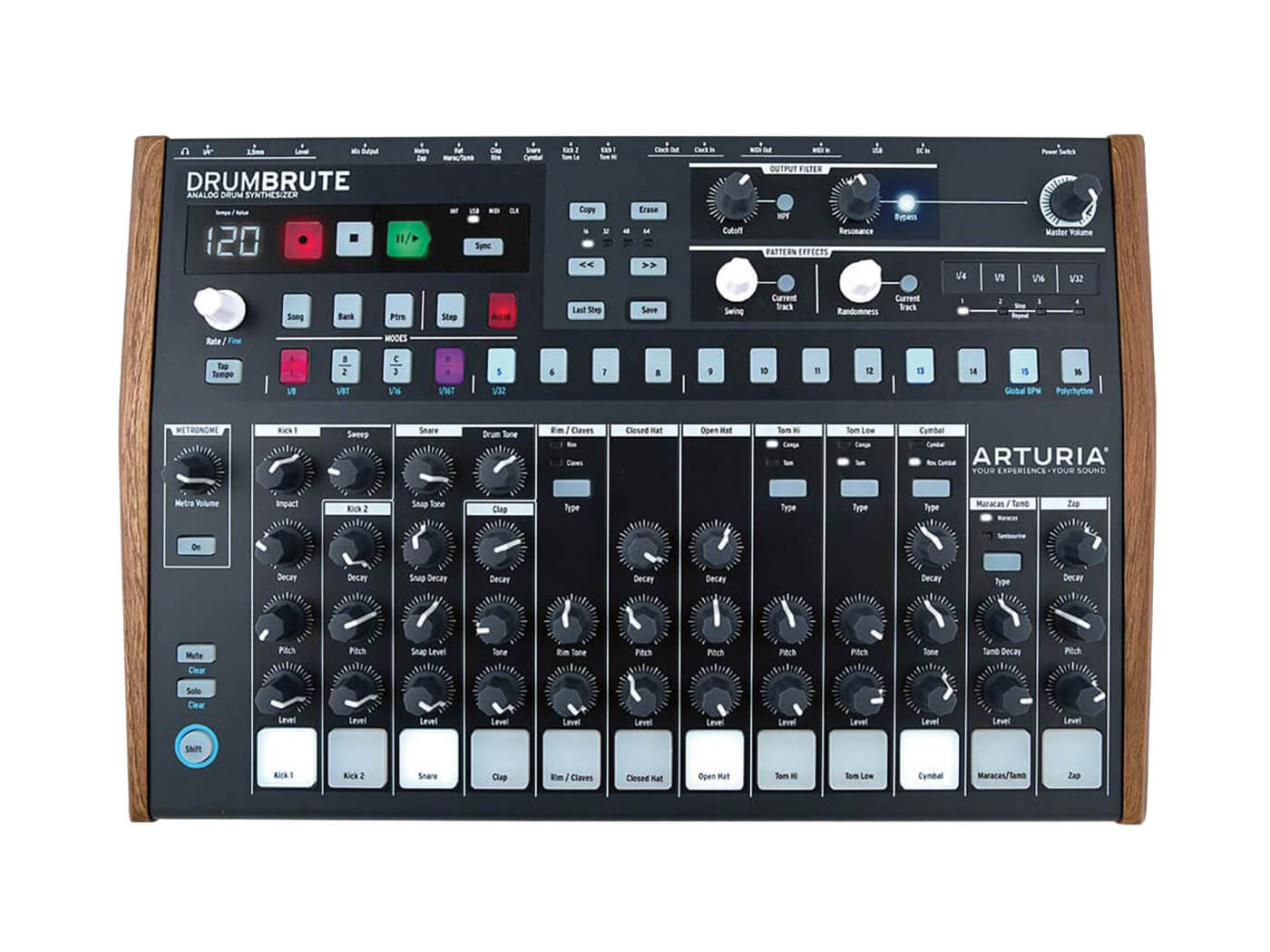 A fully featured analogue drum machine for less than £400 is not bad at all. This machine is great for dance music with a few nods to Roland’s sounds, although TR-8S is ultimately a lot more flexible in terms of its approach and effects.