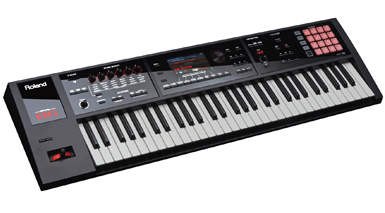 Another month, another hardware workstation… Andy Jones is one of the first to get hands-on with Roland’s FA-06.

Last month I looked at the rather great Yamaha MOXF workstation and this month it’s Roland’s turn to weigh in with a workstation (actually it doesn’t weigh that much but more on that later). As I write this, the NAMM Show – the much-hyped convention where all of us geeky technology journalists get over-excited about new music-technology releases – has just finished, but one of Roland’s new releases from that event has been with me for a while now and I can bring you this exclusive  lowdown. We’ve also pulled the stops out for a world-first review of two of the much-hyped Aira range – so this is something of a Roland month…

The FA-06 is the smaller of two new workstations – as is often the case with keyboard ranges its bigger brother, the FA-08, has a better and bigger 88-note ‘ivory-feel’ keyboard – and is designed to sit in your DAW setup or be taken on the road. At just 5.7kg you can certainly do just that, and the broad range of sounds will certainly appeal to the live player. Here, though, we’re going to focus on studio integration because this is the big difference between the FA range and the previous workstation Fantom-G range Roland had – see the Fantom History box for more on this.

The Fantom-G was an all-singing, all-dancing workstation designed to work standalone, away from a computer, so complete songs with both MIDI and audio tracks could be produced. With the FA, Roland has realised that people really do want to integrate keyboards with their computers, so, like the MOXF last month, you get just that. There is still a sequencer, but Roland has made it simpler to use so people can get their ideas down quickly, using it as a scratchpad and then transferring them, after coming back from a gig, for example, into their DAWs. As such, you can transfer 16 tracks of audio simultaneously from keyboard to DAW, which is a great feature.

The other big difference between the G and the FA ranges is that the sounds are based on those from last year’s  INTEGRA-7 module – a much updated set over the G’s, which were looking a bit dated. With a brand-new effects section and what seems like a very low price tag, the FA-06 looks like it could be a winner. So let’s get stuck in and find out…

From left to right you get the real-time controllers, that great screen and synth section, the sequencer and finally the sampler.

Sounds
We’ll start with the INTEGRA-7 sounds. These include SuperNatural synth and PCM (waveform-based) sound types that produce a vast cross-section of real, synthetic and imaginary tones. You can add to these via Roland’s Axial website (see the Old-skool Sounds box), but with 2,000-plus to wade through as standard, you might not bother for a while.

Sounds are arranged handily in ten section types under the main screen, starting with percussion and going through pianos, organs, bass, pads and so on. The architecture is fairly simple. Sounds/tones are arranged in studio sets – 16 parts, where each part is one tone (another way of saying 16-part multitimbral setups). These come into their own when you use the sequencer to create 16-part songs, but for now we’ll just go through some of the sounds, which you audition simply by playing the tone in slot number one.

The percussion sounds are arranged in kits as you’d expect, and kits range from big LA-style rock kits to dance kits and more esoteric quirky-style ones. Pretty much everything is covered and one thing I did initially notice is the depth of sound. On some of the more droney ones you really do have to be a little careful as the bass has oomph, so check your levels.

Forgive me if I don’t dwell too long on the real instrument sounds. Roland, Yamaha et al have been producing tone modules for decades and have honed their craft for so long that you really should expect both quality and variety in this area – and you do get it. I will say that the organ sounds stood out as I went through them – particularly realistic, and again, having a great sense of depth.

Onto the basses, and I don’t want to sound like a stuck record but that rich bottom end again shines here. The real-time parameter knobs also come into their own here, with the first two obviously assigned to filter and resonance, which is where the impact is, and Roland has obviously packed the synth with lots of its own heritage acid basses, although the acoustic ones –particularly the Nylon bass – stand out too.

The synth sounds themselves are rather good and there’s a huge number of them. The leads in particular really do cut it, and if you get a chance to audition the synth, dial up number 44 for a lesson in wobble. Indeed, I’d say that this area is the FA-06’s main sonic strength, as the Synth section of sounds is where the bulk of the FA-06’s sounds lie. As you go up it you’ll find plenty of other leads, analogue synth emulations, lots of in-your-face square-wave tones and, of course, 303-type sounds. There are many huge pads – just feel the belly wrenching power of the Guttural preset – although not as many out there alien-type pads. This is definitely a synth aimed at the heavier side of dance music rather than airy-fairy ambient.

One excellent feature of the synth is that it is actually a synth – not immediately obvious just by looking at it. Of course, you have the real-time knobs on the left to control certain parameters, but hit Shift and then number 2 and you go one layer deeper. You get some beautiful-looking dials to virtually turn on the screen, with access to oscillator, filter and pitch sections which you simply navigate around and edit via the cursor buttons and large dial. You can really make some big changes in here, such as changing the waveshape of the oscillator on the synth sounds or the waveforms that make up the PCM-type sounds.

Effects are also well worth talking about. With editable effects on each of the 16 parts that make up a Studio Set, there is obviously a lot of power onboard here. Choose one of 67 effects for the tone or add a bit of reverb and EQ to the whole Studio Set. Again, easy as anything to edit and again easy to make dramatic changes here – almost as dramatic as in the Synth section above.

Finally, while we’re talking about the sound of the FA-06, there are what you might call performance sounds, where several sounds are stacked together within a Studio Set so played simultaneously or split across the keyboard. You get some huge sounds here and this is a great area for the live player after big leads or the ability to split sounds across the keyboard for more flexibility onstage.

Sequencer
The sequencer on the FA-06 arguably does less than the one on the Fantom-G but that’s because Roland realises your DAW will be doing the bulk of your work so it’s designed this one for those moments of inspiration when you want to get things done quickly. First you’ll want to get a Studio Set together that contains your 16 song parts. Simply hit Shift+4 and the screen shows eight of these at a time and you can step through each sound, select and audition tones that make up each part. In fact, you can access a load of other parameters here as well, including the EQ of the part, key range and volume.

Press the sequencer button and the screen shows all 16 parts simultaneously. Hit record and it works just like your DAW, with tracks being recorded left-to-right. You use the cursors to jump around the 16 tracks to build up your song. You can easily change the sound on each track by hitting Enter, which then takes you to the FA-06’s Tone list for selection. For a hardware sequencer it couldn’t be any easier, and I think Roland has fulfilled the brief making this an excellent scratchpad for ideas. And the best bit is that you can then export what you’ve done as audio direct to your sequencer.

And talking about DAWs, a big selling point for the FA-06 is direct USB integration, so, like the MOXF, the keyboard acts as both a USB interface and DAW controller. Setting up via USB is easy – the FA-06 immediately recognises it’s talking to a computer and then you simply select Sonar, Cubase or Logic on-screen. Like the MOXF, my criticism is that there are simply not enough knobs and sliders to make this a good option over other controllers on the market, and I’m also not convinced that having big keyboards like these as your DAW controllers is a big plus. I like to have my controller in front of my screen so it needs to be compact. Big keyboards like these just get in the way, so I’m not convinced (but maybe that is just me). As an interface to your computer, though, it can’t be faulted.

Sampler
This is based on Roland’s SP-404SX and utilises the 16 pad buttons for triggering (and other functionality). You can sample from external devices by plugging them in around the back (guitar, mic etc) or else the sampler, when armed, will automatically sample anything played by the keyboard.

It’s very easy to get started with the sampler: simply hit the Sampling button, then all the pads light up. Select one as your destination, press start and sample. What you sample, be it keyboard or audio in, is then played on the selected pad. Again, it couldn’t be easier and is an excellent feature for live performance. The effects come into their own with the sampler as you can use all sorts of DJ performance tools effects combined with samples, winding up a section of a song, for example, before bringing the original back in. 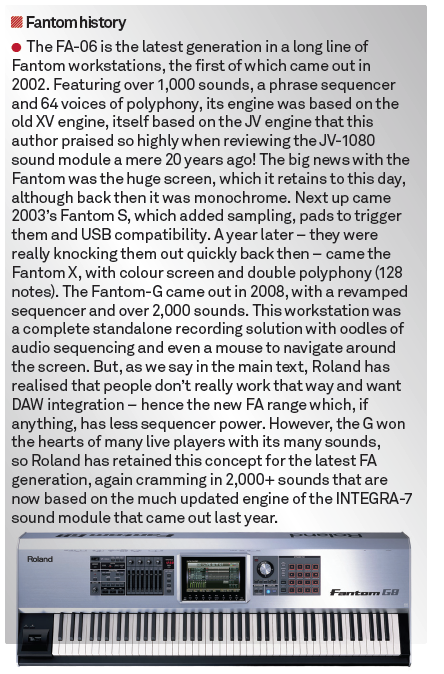 Conclusion
The central screen of the FA-06 makes it a joy to use. Each of its main areas – the synth, sequencer and sampler – are clearly laid-out and link easily into what is happening on-screen. I think it’s safe to say I got my head around all of the features in about half-an-hour. FA-06 is a synth that excels at punchy electronica and realistic acoustic sounds but has a lot more potential with just a little digging. And as a scratchpad for ideas, I’m not sure Roland could have made it any easier.

So, in summary: a great workstation for the studio and the road. It sounds big, is supremely easy to use and is packed with tones that you can dramatically alter with both synth and effect engines. MT’s Roland month continues with another winner. 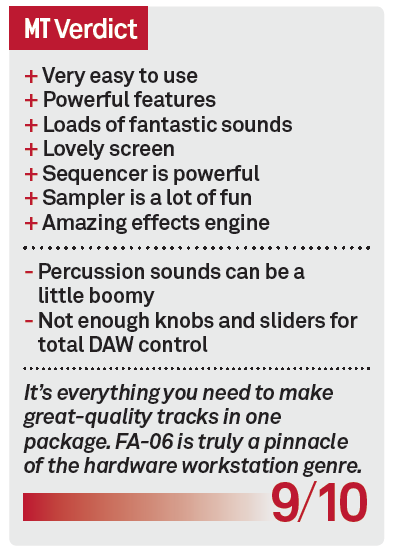