Synth players – ever wanted to go where only guitarists dare to tread? We wonder whether Roland’s latest Keytar truly has the Edge… 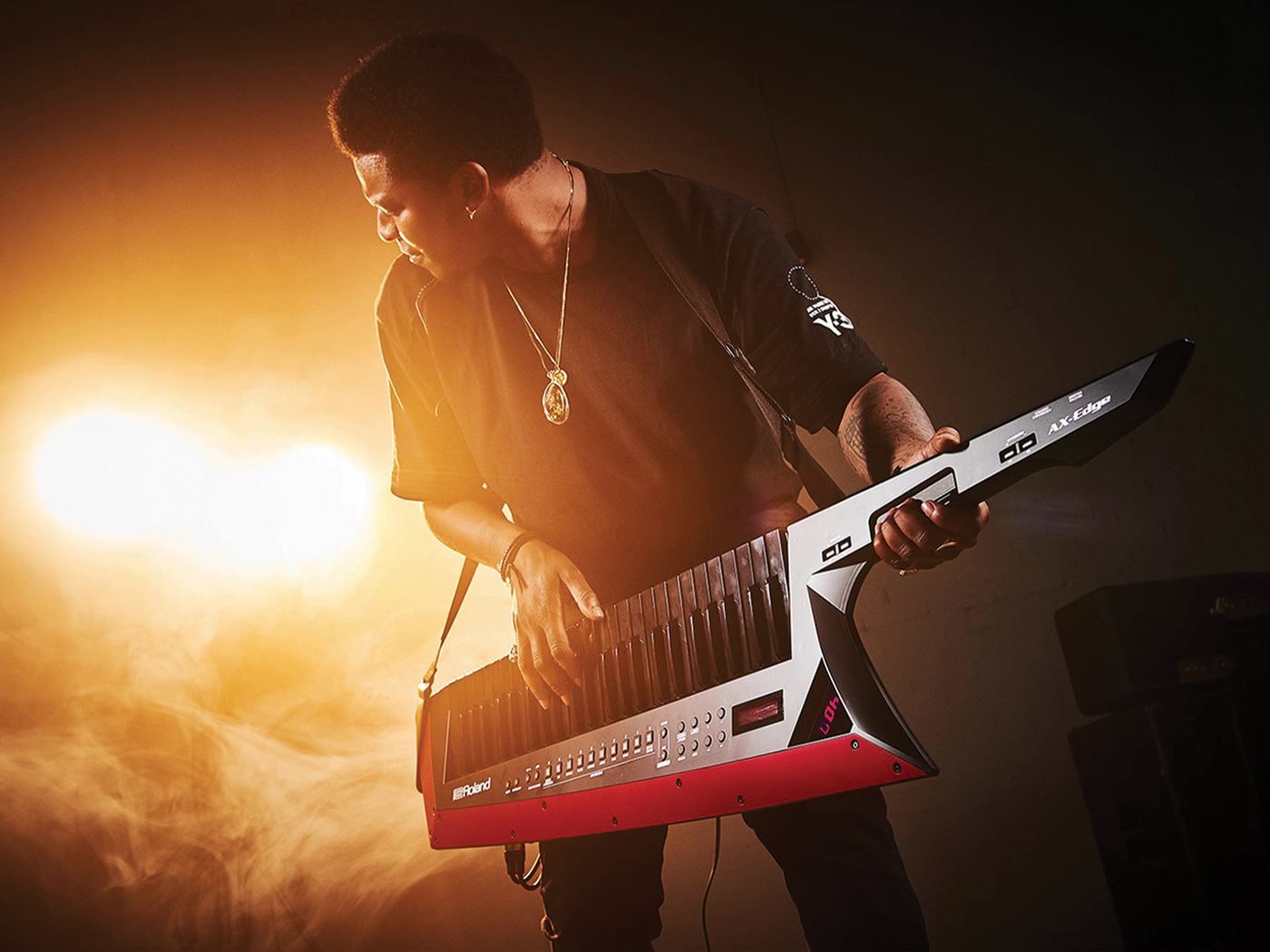 Like many keyboard players, I’ve always been insanely jealous of guitarists, wandering around the stage without a care in the world. But now, with their AX-Edge Keytar, Roland is inviting those stuck behind a synthesiser on stage to roam free.

With sensible ergonomic performance controls for the left hand and a number of strap points to allow the performer to get comfy, this is firmly a performance-based keyboard, designed to be strung around your neck on a guitar strap (though you could still use it in your studio).

The keybed itself feels great to play, although it’s obviously a slightly different story when you play it while strapped in – it’ll need a little practice to get used to the altered angle.

To allow for that free-as-a-bird performance experience, you can place eight AA batteries inside it, or you can use the included power supply. But you’ll need to connect the audio output if you want to hear the internal sound engine: and while we’re on this topic, the AX-Edge offers a multitude of tones, but you can’t help but hear where Roland wants to entice you to go first.

The initial category of sounds you’re let loose on with the AX-Edge is labelled ‘Edge Lead’, and sure enough, there are plenty of cutting and sync-styled tones to get you in the mood for a keytar-in-the-mirror moment. I immediately started playing Daft Punk’s Robot Rock… I couldn’t help myself. 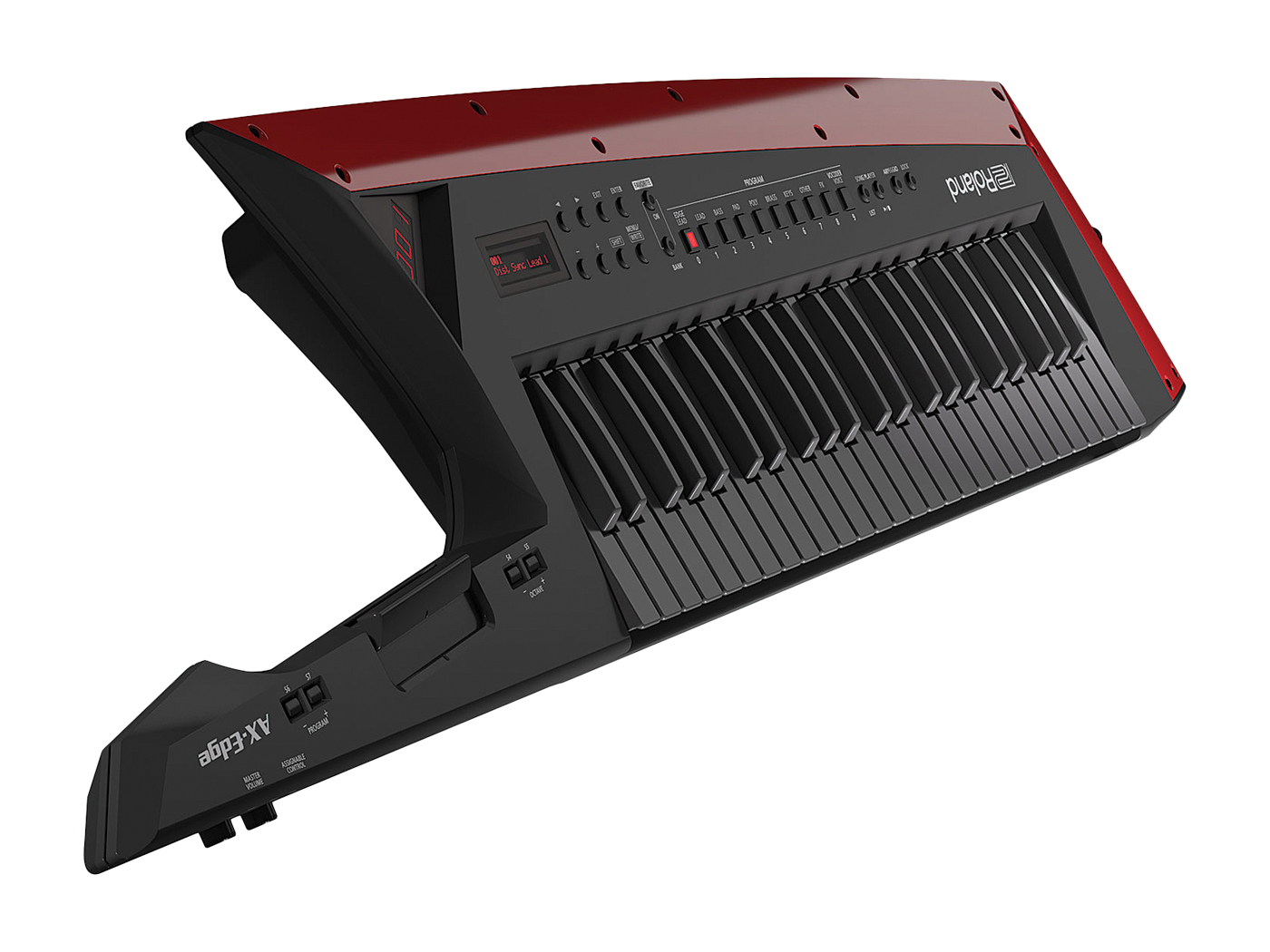 Stay in the Eurozone

There’s a fair range of timbres available, with a great deal of emphasis on what you might call 80s-styled Euro-tones. Alongside the leads are some great digital pads and bright pianos, with nods to tones such as the Pizzagogo from Roland’s D-50 – which sounds pretty huge and fab.

The AX-Edge quickly and easily pairs with a Bluetooth device, via the free app for iOS and Android, which enables editing and librarian-style functions. One reason the instrument sounds so effective is that in true Roland form, each patch is a stacked sum of parts. Even more enticing is the presence of an onboard vocoder which, although a basic implementation, sounds excellent. Even with a very cheap dynamic mic attached, diction is clear enough, while there’s a welcome smattering of both modern and classic VP-330-styled sounds.

You’re going to smile when you play this thing. It’s an awful lot of fun and is really well made, so when you’re hanging on to the modulation grip, which has an assignable ribbon controller and mod control, it feels incredibly solid, which has not always been my experience with similar keytar instruments. 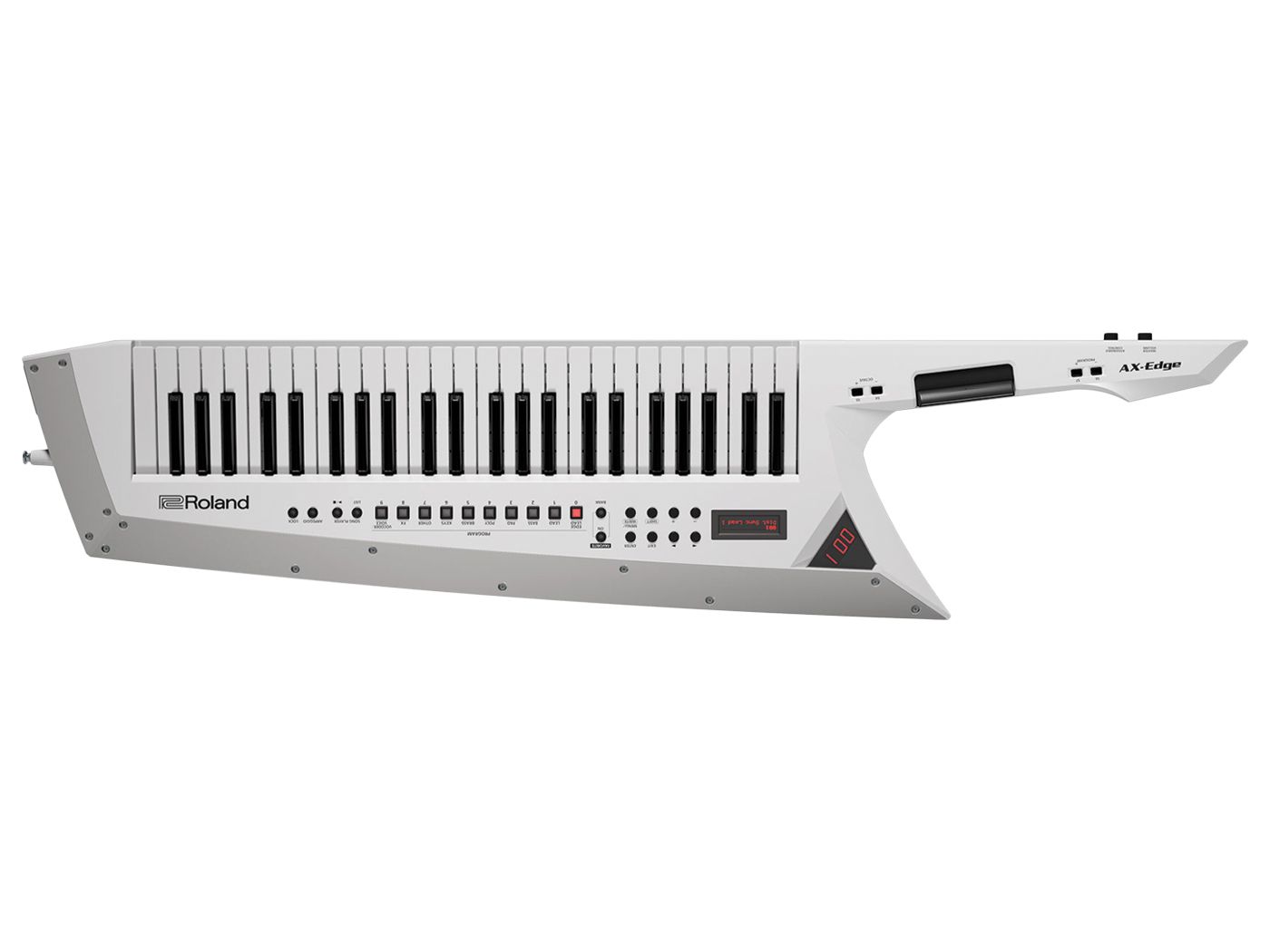 Ergonomically speaking, the mod grip extends out quite far and in the studio environment, it could potentially get in the way and become annoying while recording. This could make the Ax-Edge more of a niche product, and at £879, it’s one that’s going to be more of a considered purchase than an impulse buy.

Also, the way the AX-Edge has been marketed suggests it’s a rock players’ keyboard, and while many of the sounds tilt it firmly in this direction, this isn’t the whole story. The sonics the AX-Edge offers are a delight. It has a very powerful sound engine, with great devices such as an arpeggiator and a vocoder built in: and with a little bit of effort, it could easily lend itself to the more electronic end of the spectrum, while remaining a predominantly performance-based beast.

Do I need this?

This is a curious one, with synth-playing folk truly divided on the issue. On the one hand, I spoke to a number of people who share my common interest, and we all came to the same conclusion. If we were 20 years younger, possibly a few pounds lighter and had more hair on our heads, we’d love to stand at the front of a stage with a sharp white keytar such as this, which might also explain why so many of the younger players I showed this to immediately just said: “Cool!” So I believe the question is best answered by asking yourself how comfortable you’d feel on stage with one. It’s a great bit of kit, but are you a big enough kid at heart? 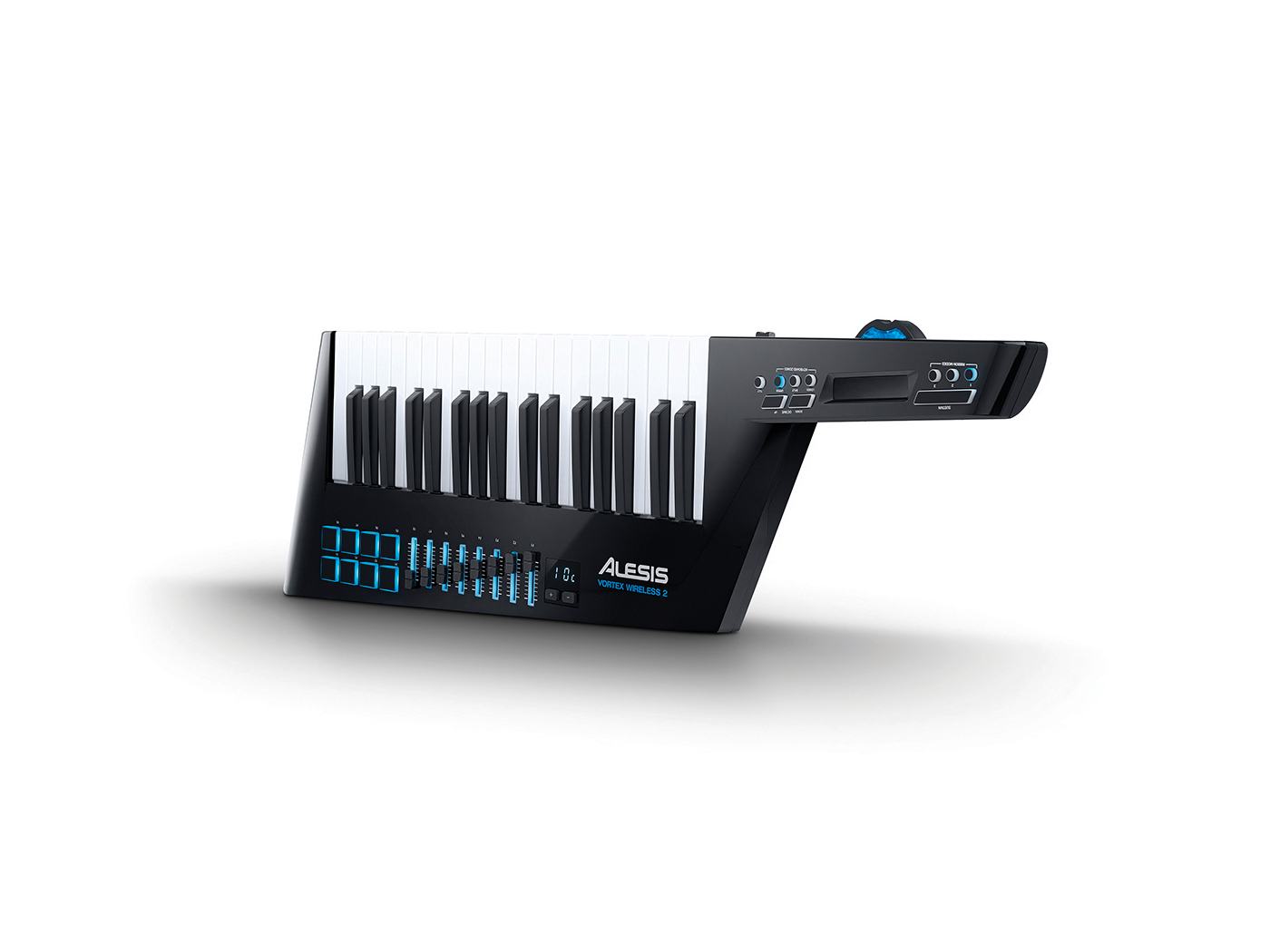 This cheerful keytar is purely a MIDI controller, but allows wireless MIDI while exploiting an external device to take up the audio slack. It ships with plug-ins, and certainly looks the part with its multicoloured controls and pads. 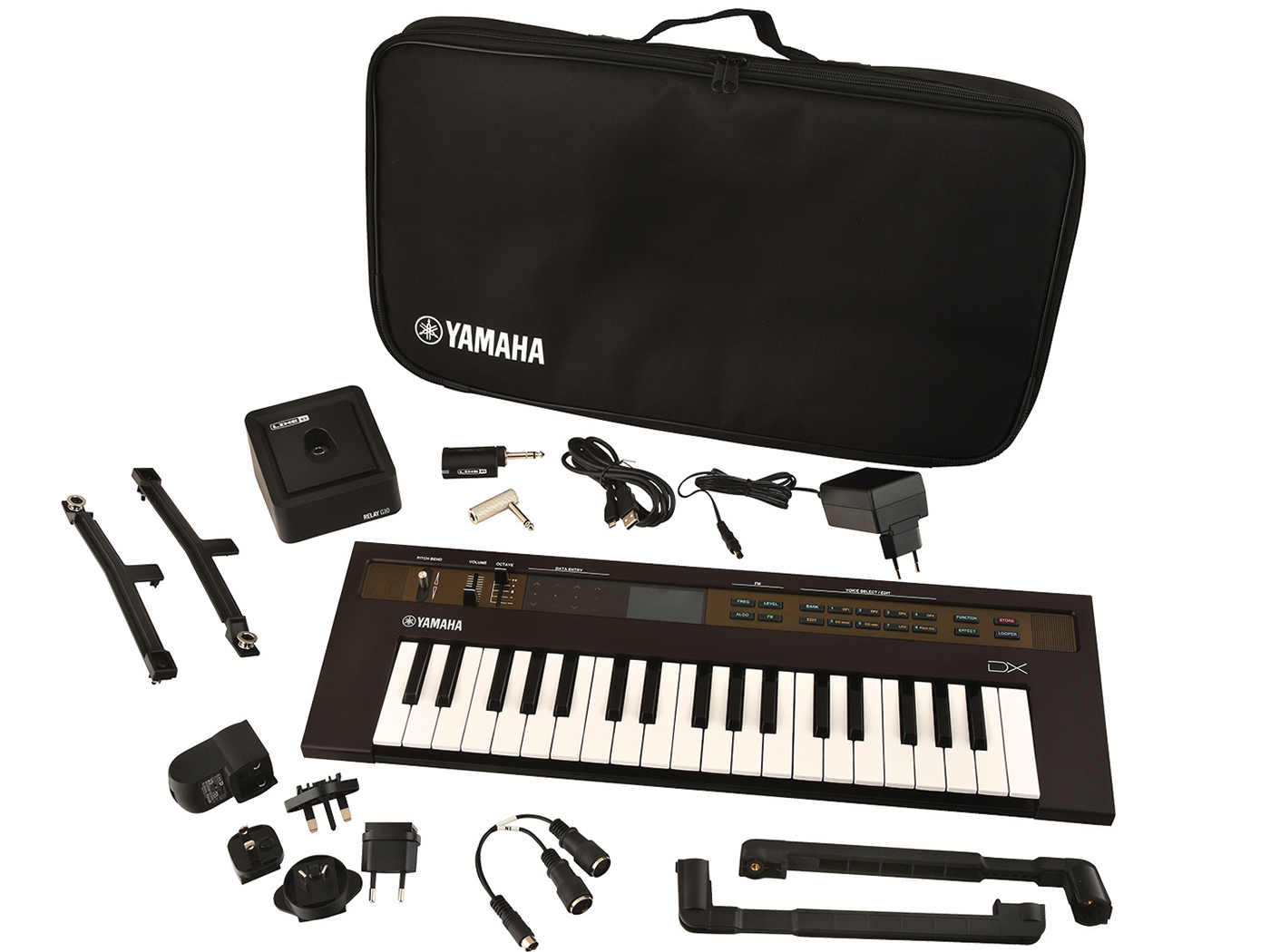 Yamaha’s Reface series can be used in keytar and wireless operation, with the Reface DX kit offering a complete solution – as long as you don’t mind the FM sound engine. Strap kits are also available.