Blue was released in 2005 and won the hearts of many, including MT editor Andy Jones. Will their love affair be reignited with v2? Details Price £109 (upgrade from Blue £35) Contact Time+Space 01837 55200 www.timespace.com Minimum system requirements PC 32-/64-bit VST and AAX for Windows Vista or higher Mac 32-/64-bit AU, VST and AAX for Mac […] 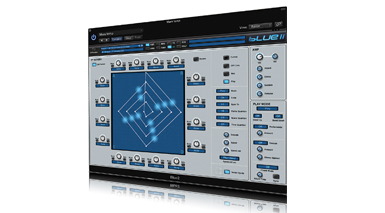 Blue was released in 2005 and won the hearts of many, including MT editor Andy Jones. Will their love affair be reignited with v2? 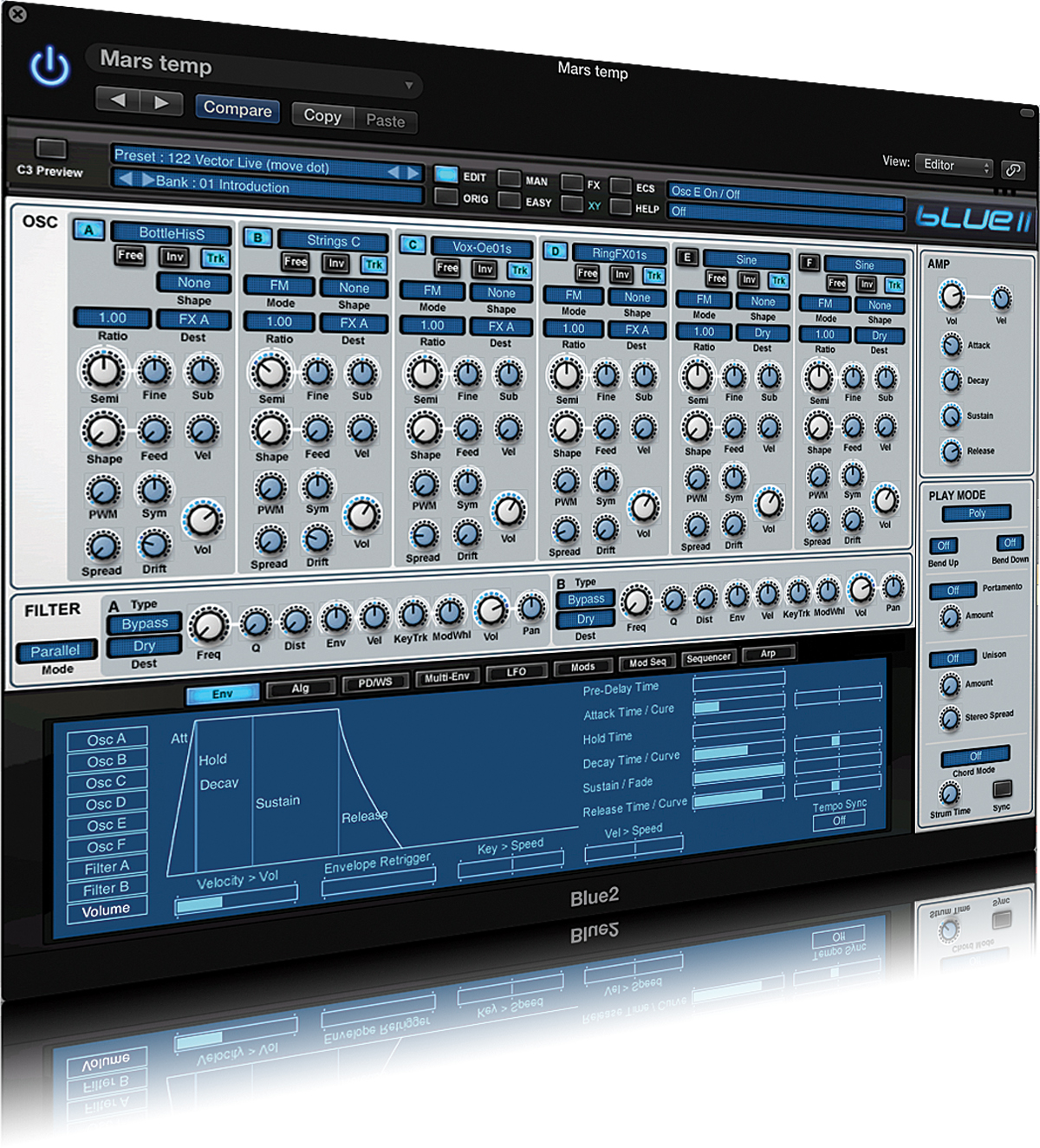 It’s hard to believe that the first version of Rob Papen’s Blue was released way back in 2005. Its ability to cover so much ground with its so-called ‘Cross Fusion Synthesis’ won it many fans. It came with FM and subtractive synthesis, plus add-on phase distortion and wave-shaping, making it a kind of ‘best of’ of electronic music-making. Indeed, it stayed on my computer for many years and was, for a long while, my ‘go-to synth’ (sorry, I hate that expression too).

It slipped from my hard drive during a major computer upgrade but I remember the original for its wide variety of consistently great sounds that all blended seamlessly in any mix, so news of its sequel is very welcome indeed. And my interest was piqued at the NAMM Show back in January when I saw, from a distance (you couldn’t get close for all the people watching), a demo of Blue II, complete with fancy bouncing ball graphics. 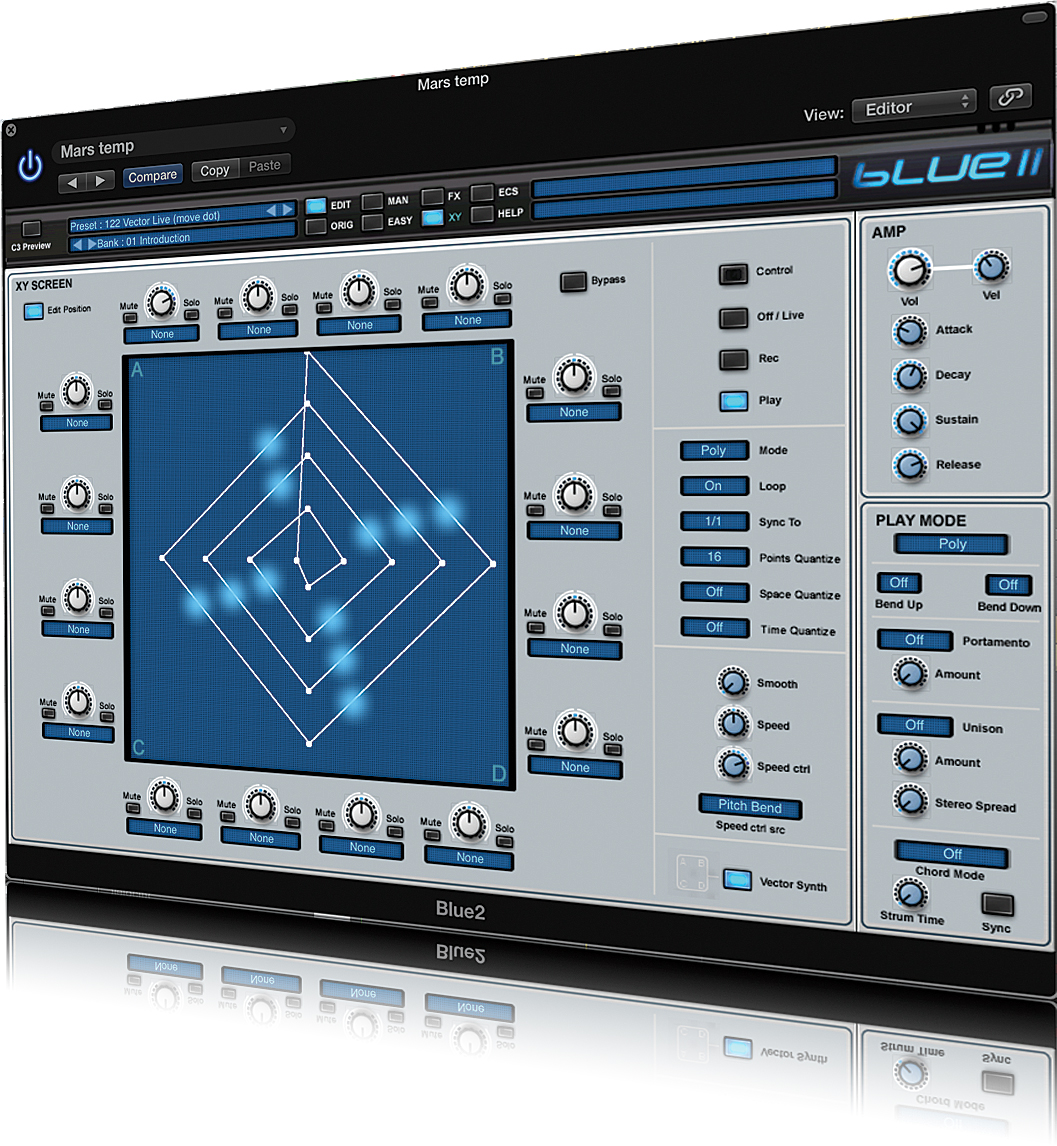 Blue II is quite definitely maintaining that Cross Fusion Synthesis angle with the subtractive, FM, phase distortion and wave-shaping of the original plus a lot more besides. It has six oscillators which use any of these synthesis types alongside new sets of sampled waveforms. Then there are a couple of filters with 27 different filter types, a big set of effects processors (each offering 35 FX types), a huge (and I do mean huge) collection of presets, an onboard sequencer and arpeggiator, loads of modulation possibilities and it nicks the XY pad feature from its Blade relative (you’ll find more on that connection in the boxout). On paper this thing is huge, but despite all of these features it is still surprisingly easy to get around.

Easy Times Six
The synth’s front panel is easy to understand from the off. All six oscillators are laid-out in channels, like a mixer. Each has tuning and wave-shape parameters to control plus, of course, the volume of each part. The real beauty begins when you select the original waveform – it’s like lifting the bonnet of your car for the first time and discovering a monster engine. Or, in this case, 12 monster engines…

Yep, there are a dozen different types of source waveform to choose from: anything from analogue, through spectral through to a whole range of sample waveforms. The analogue section itself has 15 different waveforms to choose from and the additive a mere 39! So what I’m attempting to say is that the building blocks in this synth are many and varied, but multiply that lot by the six oscillators and you have an enormous synth with enormous potential.

So you can already get a pretty clear picture of Blue II. Lots of oscillators, each with lots of different waveform categories, each with lots of waveforms, lots of destinations to send them to (including the two filters) and lots of effects to splash across the lot. ‘Lots’ then. With all this in mind we’re expecting a huge array of very varied sounds. And, of course, this is Rob Papen. We’re surely not going to be disappointed by the quality as well as the quantity, right? 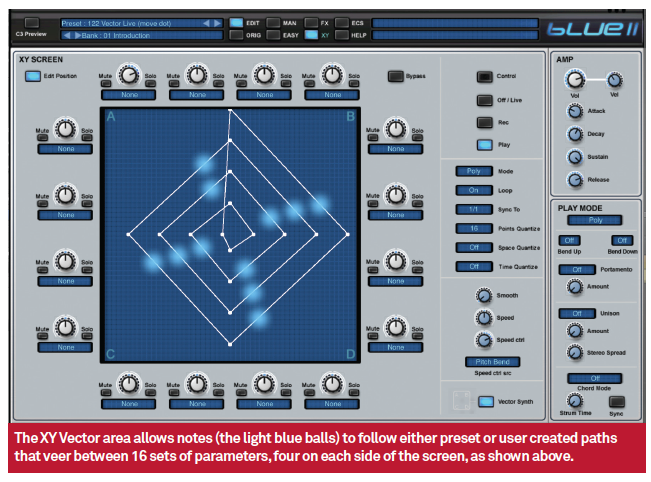 Do Everything
So we’re not even into the sounds yet and we can already see that this synth does loads, almost too much. And sound-wise there are almost too many. When I reviewed the Yamaha MOXF hardware workstation a couple of issues ago I was almost overwhelmed by the number of presets on offer – and I’m getting that feeling now. There are 25 banks each with 128 presets, which adds up to a mighty 3,200 presets (including the sounds from the original Blue). Not all of the preset slots are filled – there are quite a few empty ones for you to fill with your own creations – but there’s still a good couple of thousand-plus to get your teeth into. Like I said, potentially overwhelming.

Fortunately, the sounds are arranged by category, but it’s a little like Rob didn’t quite know how to label them. Should he do it by sound type? By programmer name? By genre? By tempo? What the heck, do it by all of the above! So it might seem a little random at first but let’s dive in, because there’s a lot of swimming to do. 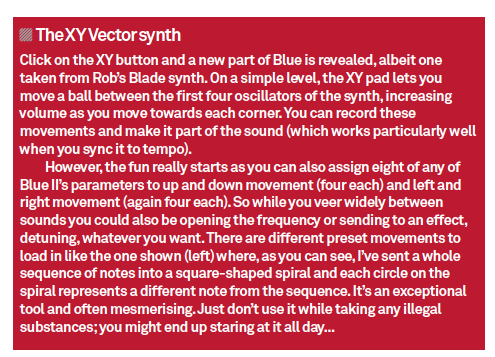 We’re not going to describe each and every sound here, just attempt to give you a flavour of what is going on. Basically, Rob clearly wants this to be the only synth you use, so like The MOXF and like the Roland FA-06 I reviewed the following issue there is something for everyone. Unlike those, there are fewer ‘real’ sounds apart from a keyboard category that has some nice electric pianos and real keyboard sounds. There are also some proper choirs and some fantastic strings, but the rest concentrates on proper synth stuff –and lots of it…

The first three banks are pad sounds. What really comes across here is the fact that there are six oscillators on offer as many utilise at least three of them to get lots of movement and variation. For those of you old enough, it’s like going back to the digital synths of the late 80s, when the programmers put in mighty performance presets that stretched the very specs of the hardware. Here there are plenty of those even though Blue II’s engine is hardly trying – barely ticking over if I want to really stretch that car analogy thing too far.

Anyway, there’s tons of emotion, oodles of atmosphere and some incredible richness. You might even –I never thought I’d say this – want to pull back and turn off a couple of oscillators on some to make them sit better in your mix as they are so big, otherwise it’s ‘hit one note, instant Vangelis’.

As you step through the four bass banks (two analogue, two digital), the synth moves from the late 80s through the 90s, noughties and very much more up-to-date with some absolutely huge presets that would easily carry a tune from any era. The digital basses are surprisingly, how should I say, un-digital? Some are massive, so if you’re expecting a load of DX7 bass sounds – which I admit I was – you will be pleasantly surprised.

The lead sounds, again, are nice and up-to-date although I was less enamoured with the sequencer sounds. Some were so short in duration that, even within a sequence, they simply sound a bit, well, bitty. The same could be said of the Arp banks, although with three of these on offer there are far more hits than misses.

Genre sections include a couple of hip hop banks and a drum&bass one, all with a good variety of sounds including plenty of big basses and leads. There are also percussive banks and several ‘named’ ones, some of which contain among the best sounds in Blue II – really dirty, in-your-face presets that inspired me well into this marathon session of preset auditioning.

So all of that leaves me pretty much zero room left to talk about the sequencer and arpeggiator. Both are surprisingly fully featured, the former allowing you to use Blue II as a standalone music-maker, but it undoubtedly sits well with any sequencer as possibly being the only synth you’ll need.

Like I said earlier, Rob Papen has put so much into it that’s clearly how he wants you to use it, so it could be my ‘go-to synth’ again, much like v1. I can’t believe I said ‘go-to synth’ three times in one review, mind… 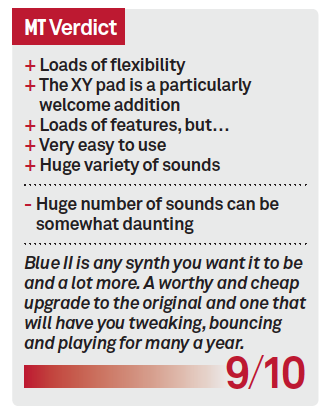 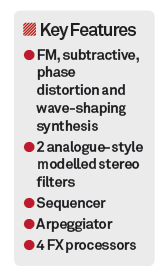