One of the few classic 80s monosynths, the Roland SH-101 became something of a legend, before falling out of favour and then back in again… I’m sad to say, I’m old enough to remember the release of the humble 101. At the time, I was feeling rather too pleased with myself, having a Jupiter-8, when […]

One of the few classic 80s monosynths, the Roland SH-101 became something of a legend, before falling out of favour and then back in again…

I’m sad to say, I’m old enough to remember the release of the humble 101. At the time, I was feeling rather too pleased with myself, having a Jupiter-8, when I casually remarked to a friend who was looking at a 101 in a shop that my Jupe was akin to eight 101s… In one respect, I was right, knowing that the Jupiter had a full eight voices to exploit compared to the mono 101. but in just about every other respect, I was an absolute ‘wronger’.

The 101 had not quite been accepted for the sonic powerhouse that it was, so I picked one up second-hand for a very humble £125. My trusty 101 became my absolute go-to machine for just about all bass duties, on more hours of TV music than I care to think about. Its crisp and reliable Japanese timbre, coupled with the most amazing timing and reliability, put many later machines from the 90s to shame.

I stuck with it until software developments had moved on to such a degree that there were soft synths to offer something new.One of the main calling cards of the 101 is the design of the oscillator. This comes from that period where Roland VCOs/DCOs had started to benefit from digital stability, with open access via CV and Gate and – in the case of the 101 – absolutely rock-solid tuning and timing.

In common with the Juno series, from the same era, the VCO offered a fader/volume control for Sawtooth and Square wave/pulse and these tonal colours could be blended together. But what really set the 101 apart from other synths was the suboscillator, offering a dedicated fader to increase the volume of a Square wave, either one or two octaves below the fundamental pitch. What’s extraordinary about this is that the sub just blends with the main oscillator, which is a thing of joy. It just sits, most likely because it’s part of the same oscillator circuit, meaning that tuning is locked to the fundamental. It sounds huge – it’s Roland’s sonic calling card. 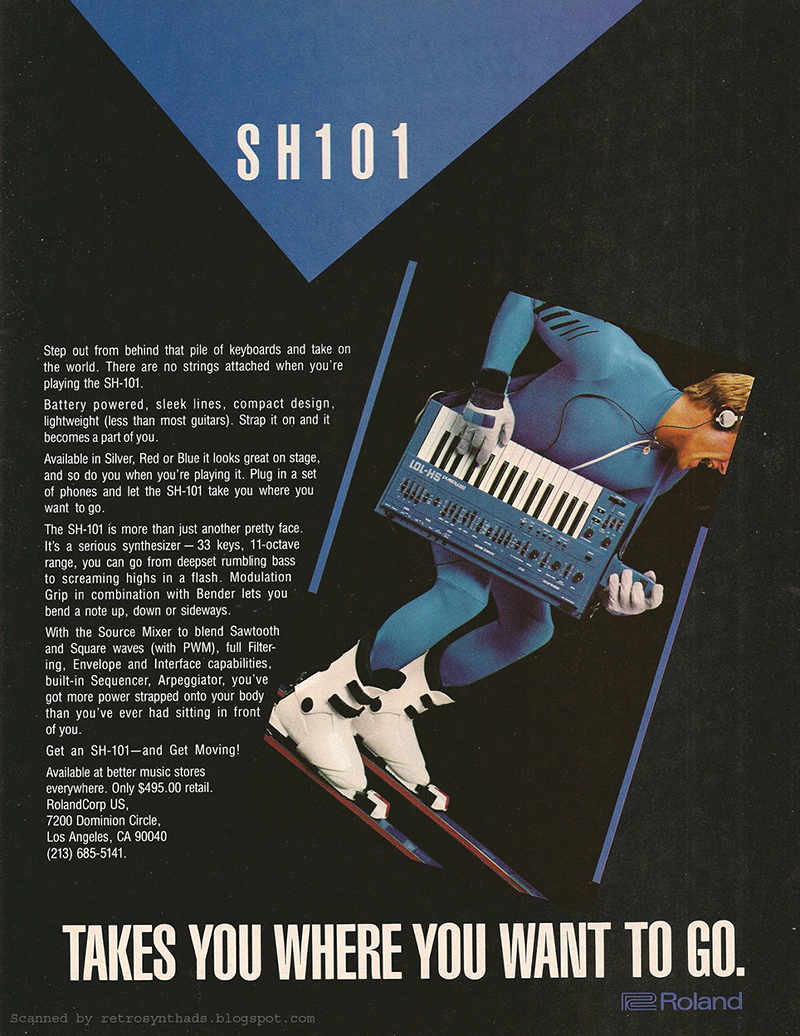 The 101’s filter was not entirely dissimilar to that of the 303. By the mid 90s, 303s were commanding exorbitant prices on the second-hand market and many people discovered that 303-style effects could be created with the 101 on the cheap. This 303-style nod was due to a couple of factors; firstly, the filter itself could be very aggressive, driving into a frenzied state of self oscillation, which could track incredibly well.

This gave rise to the filter’s sinusoidal use in all manner of drum’n’bass tracks, while the onboard sequencer, capable of capturing up to 100 steps via the inbuilt keyboard, allowed for easy programming of linear lines. Included in the sequencer was the ability to add rests and glissando-style slides, meaning that screeching 303-like timbre would have you shouting “Acceeedd!” before you knew it.

Curiously for a monosynth, in the same section as the sequencer is an arpeggiator. The hours that I got lost in the 101, with the arpeggiator and a delay… Inspiration from a single monosynth is a wonderful thing!

The 101 didn’t have the most elaborate options for modulation, but one favourite was always the ability to route the envelope to the filter cutoff, adding further to its 303-style credentials, but Roland did try and push the 101 as a live instrument, and part of this was its ability to operate as a ‘keytar’. Available as an add-on, the MGS-1 mod grip allowed the user to fit a mod-grip handle to the left-hand side of the keyboard, allowing the player to strap on a battery-powered 101 and run around the stage. Regrettably, for the humble 101, within a couple of years, it was up against the new world of FM sounds and analogue timbres started to fall out of favour.

So how does the 101 fare these days? Incredibly well, is the easy answer!

Despite the recent onslaught of analogue monosynths, the 101 still has its sonic place. Even Roland didn’t manage to capture the spirit in anything that followed, until it released the SYSTEM-1 with its great SH-101 Plug-in/Plug-Out. If you simply must have an original, there’s still a plentiful supply. Second-hand prices have settled down of late, too. All hail the SH-101; a humble little monosynth, that cost next to nothing, but turned out to be a modern-day classic.