With Propellerhead’s Reason DAW reaching version 10, it’s time to honour the software that came before it, ReBirth RB-338 – the first soft-synth emulation… I remember when I first played Propellerhead’s ReBirth. Turning knobs on a computer screen and the sound changing in real time might sound like child’s play now, but 20 years ago, […] 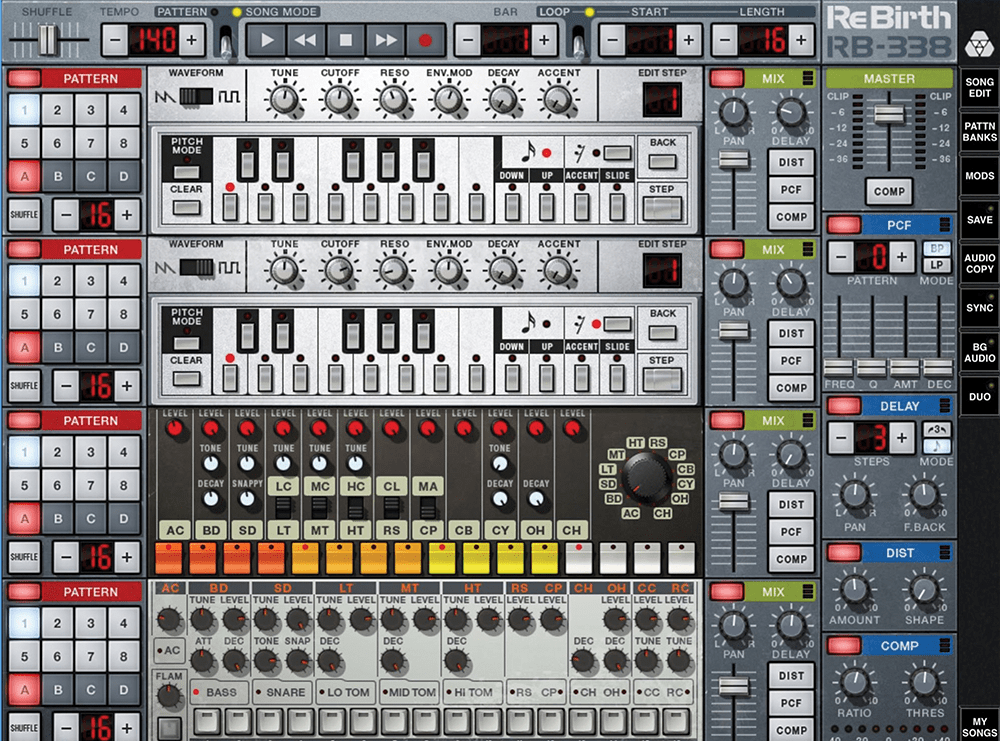 With Propellerhead’s Reason DAW reaching version 10, it’s time to honour the software that came before it, ReBirth RB-338 – the first soft-synth emulation…

I remember when I first played Propellerhead’s ReBirth. Turning knobs on a computer screen and the sound changing in real time might sound like child’s play now, but 20 years ago, it was a thing of wonder, a kind of dark magic. It was especially incredible as it made the sound of the TR-808 and TB-303, two iconic Roland dance beasts that everyone had tried to recreate in hardware, and here was something doing it… in software?

It’s a good time to look back and honour ReBirth. Not only has Reason, the product that it arguably spawned, reached version 10, but ReBirth itself finally bit the dust earlier this year after Roland issued a statement saying that it infringed on the company’s intellectual property rights.

It would be hard to argue with that, as even Propellerhead Software call it “the first software synth emulation”, and what it was obviously emulating was two Roland TB-303s, a Roland TR-808 and (later) a 909 drum machine. Those instruments are, of course, synonymous with dance music (still!) and Roland has been repackaging them with some aplomb in recent years. You can understand the stance, even though Roland had effectively turned a blind eye to ReBirth for much of its rather complicated lifetime…

Propellerhead Software started in 1994 with ReCycle, a slice ’n’ dicer that made creating new beats from old a sizzle and one that created the REX file format still used to this day. The Props already had Reason in mind for their next product, but were held back by computer power; so the slick and efficient ReBirth was born a couple of years later, then with just an 808 for beats. The 909 was added at v2 completing the Holy Trinity of acid house needs – and the software was a huge Mac and PC hit.

You could chain up to 32 patterns together of each instrument and have all four playing together for what would have been complete tunes back in the halcyon days of acid. Not only that, but you could mod the software and change its design and drum samples, something the Props even encouraged.

As ReBirth had the claimed status as the first software emulation, it was not only incredibly successful, but paved the way for a million other virtual instruments, emulations or otherwise. It also sent a shockwave through the synth hardware industry, as many saw it as heralding the start of a very soft future – perhaps the end of hardware as we knew it. Of course, that synth hardware never really went away, but there were a few worried instrument makers at the time, let me tell you.

In 2005, Propellerhead Software announced it was discontinuing support for ReBirth, stating: “We’re a small company with limited development resources and we think it makes much more sense for everybody involved – even ReBirth users – that we concentrate our efforts on our more current products and on future projects.” It also announced that it would give the software away for free, setting up a dedicated website to download it and many of the mods that were available for it.

“That would have been the end of the story, but some bright spark at the company realised how cool it would be to control ReBirth with touch technology – so in 2010, ReBirth for iOS was released. The iPhone version was discontinued in 2013, but the iPad version stayed on the iTunes store until 15 June this year, when Propellerhead removed it and ReBirth came to an end for a second time. A ReDeath, if you like. “Rather than refuting this claim,” the Props said, “we have decided to honour our long-standing relationship with Roland Corporation.”

If you ever used ReBirth back in the day, or are one of the lucky iPad owners, you’ll know how much fun it really was and also how real it sounded compared to the originals. It was a landmark product in so many ways and you could even argue that it helped those classic Roland sounds live on in dance music. ReBirth, may you (re)rest in peace.