As Novation’s Launchkey controller moves onto its third iteration, we see whether its substantial design changes unlock increased performance power or whether this lock is jammed 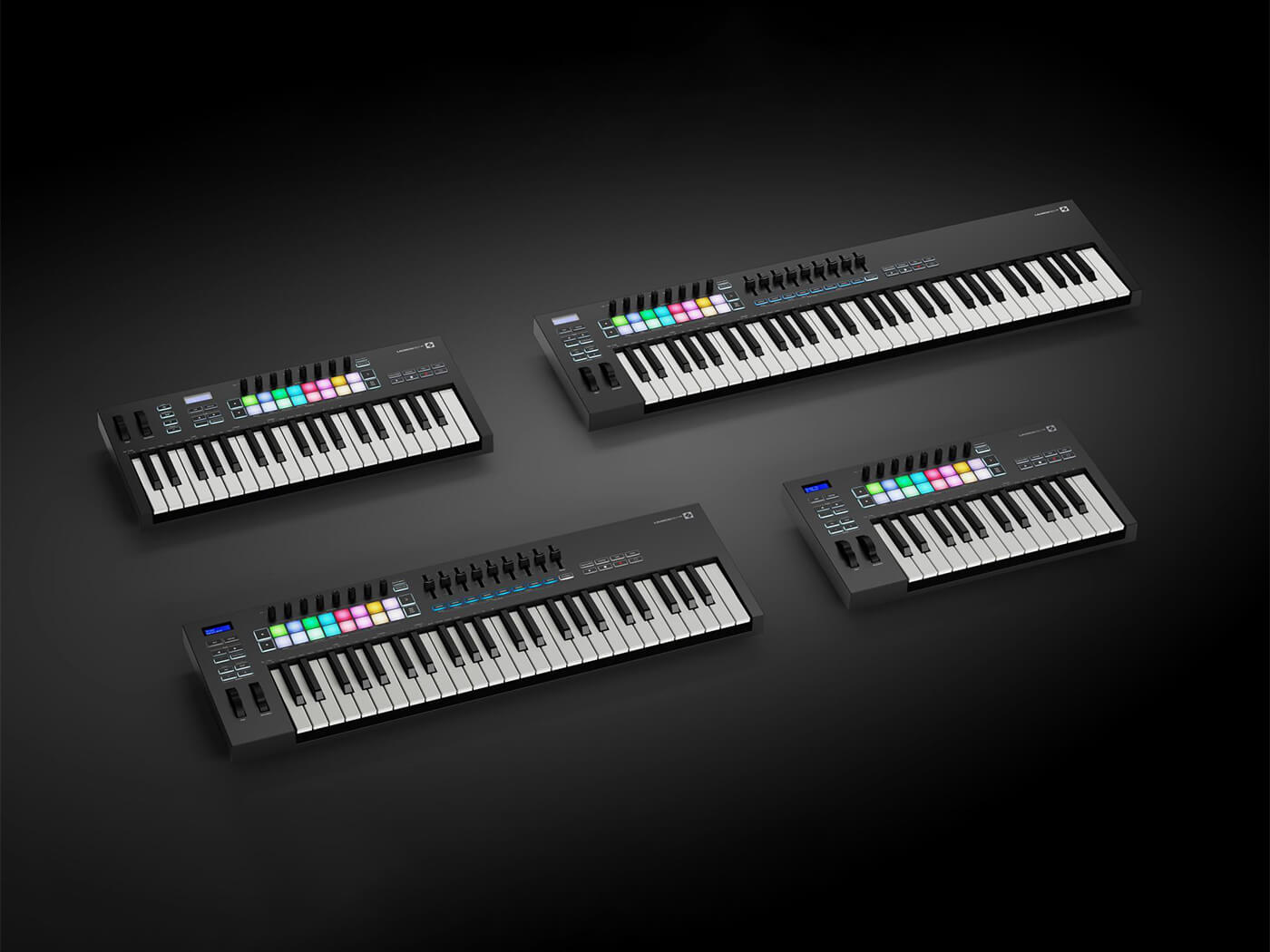 With the centricity of in-the-box instruments and plug-ins to modern production, the controller keyboard is often one of the most essential aspects of the studio, a conduit to a virtual sonic universe. Having a well-designed and flexible controller, therefore, is vital. After all, you don’t want to spend thousands of pounds on synthesizers and virtual instruments only to have your playing experience compromised by something that doesn’t feel genuine or doesn’t provide the versatility you require.

Novation has always been one of the leading lights in this arena. Its original Launchkey was released in 2013 and followed by an updated version in 2016. Now, after a four-year wait, the MK3 is finally here. But what’s new?

The new Launchkey is available in four versions, from the diminutive LK25, the new LK37 and the LK49 (which we’re evaluating here) to the fully-fledged studio-ready large-and-in-charge LK61. Whichever version you’re using, you’ll find that the MK3 appears sturdy and well made straight out of the box. It’s more refined than previous versions, with rotary encoders and faders that feel especially solid and have no discernible wobble. The sharp corners and matte finish are aesthetically pleasing and, although it’s lightweight, the feel of the full-size keys is satisfying too. They feel substantial, like they’re built to last. The black keys have the same matte finish as the body of the keyboard, which is a fantastic touch.

With brand-new scale, chord and arpeggiator features, the addition of the MK3’s backlit LCD screen is terrifically useful. It’s small but it accurately conveys all the information you need to know, and all the buttons and pads are solid and responsive, with the pads sporting attractive RGB lights. 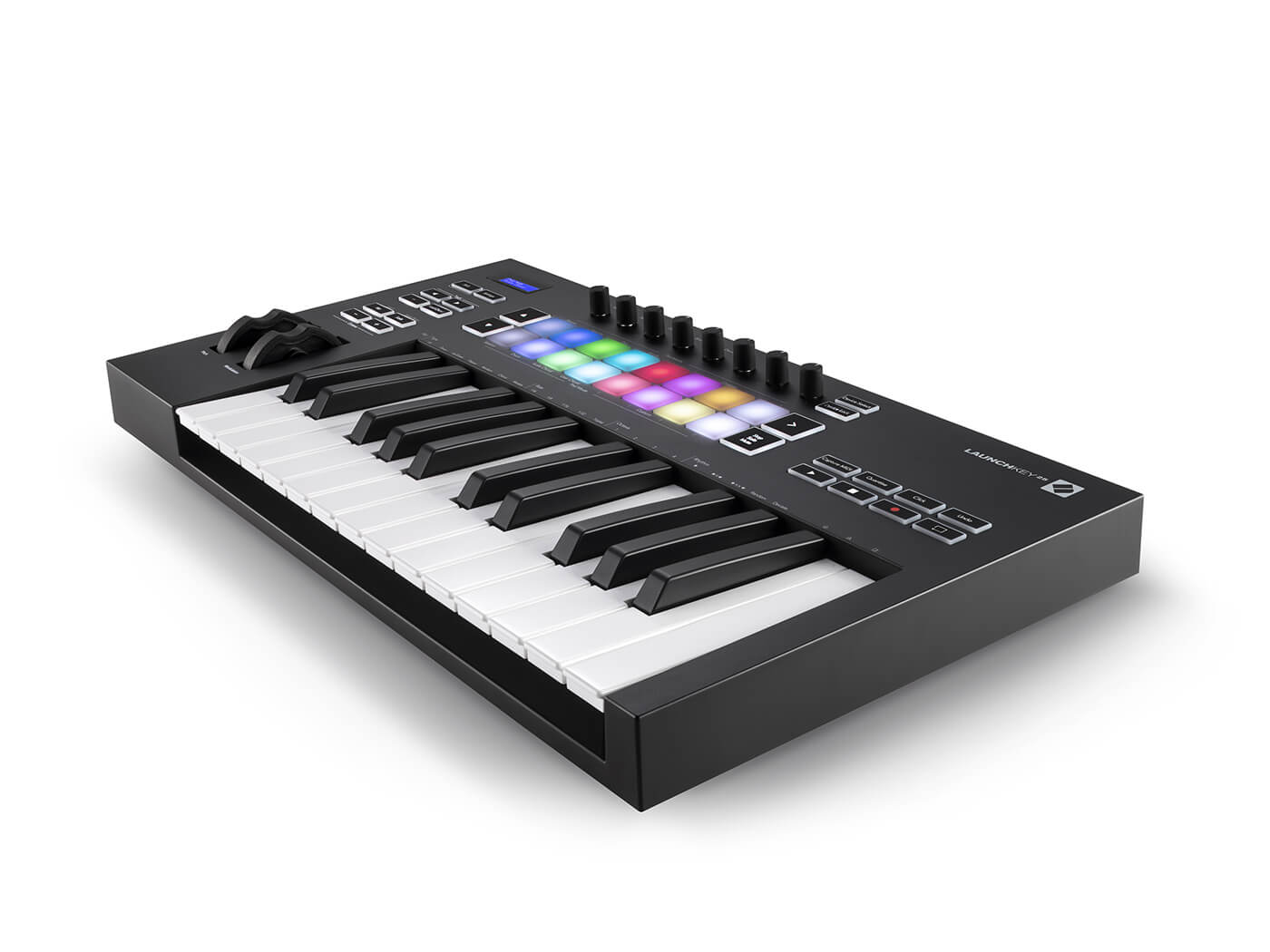 As with its predecessors, the Launchkey MK3 has unique synchronicity with Ableton Live, and control comes effortlessly. To access Live’s Session mode, hold Shift and hit the Session pad, and you’ll be greeted by an 8×2 grid of the clips in the Session view, all of which are colour coded via the RGB lights and correspond with the clips to provide visual feedback.

From here, you can launch your Live Clips and Scenes and swiftly change modes so you can easily stop, solo and mute clip, and jam with clips you’ve already made.

It’s also simple to record, quantise, turn the metronome off and on, undo, and (with the 49 and 61-key models) arm and select different tracks. Pressing Shift and the Drum pad will see the pads adhere to a velocity-sensitive drum mode that lets you play your Drum Rack, using the up and down buttons to scroll through its bank of 128 pads.

The Launchkey MK3 is highly adept at mixing duties too. Its intuitive controls provide access to core mixing parameters. Simply press Shift and then the Volume, Pan or Sends buttons grants control over their specific criteria.

On the larger 49 and 61-key models, the 45mm faders control volume by default, with the first eight controlling track volumes and the ninth controlling the master volume, though this can easily be assigned to control the send A and B levels instead. You can also control individual devices using the encoder pots when in Device mode, or the sliders, using the up and down buttons to navigate through various devices in a track. 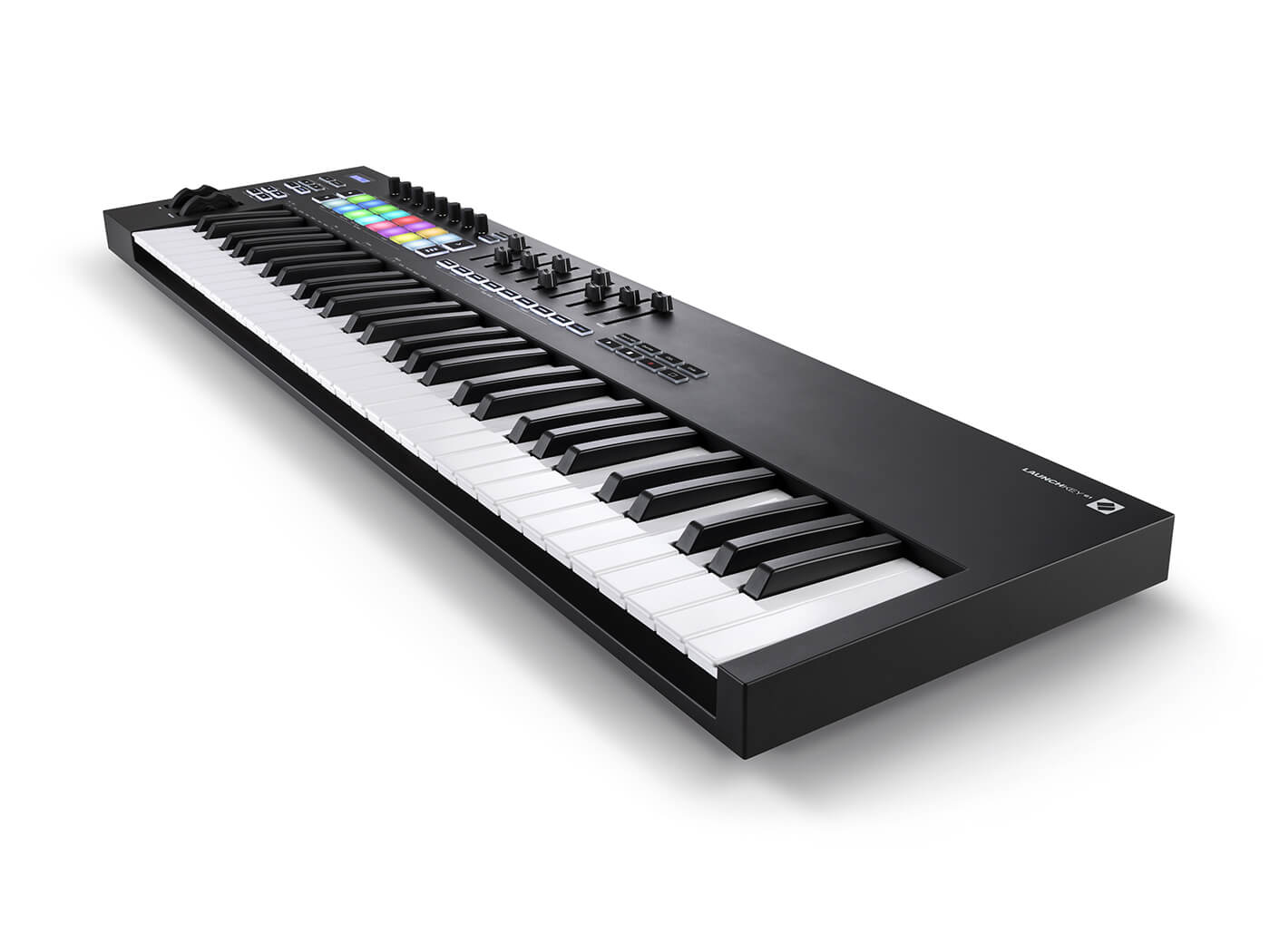 The Launchkey MK3 has lots of superb standalone features too, with the velocity-sensitive drum pads capable of outputting MIDI notes from C1 to D#2, and working wonderfully for finger-drumming tasks. The mostexciting elements of Launchkey MK3, however, are to be found in the Harmonic modes. We test the following in REAPER but it’ll works just the same in your DAW of choice.

Press Shift and the Scale chord pad to set the 16 pads to Scale Chord mode, for which every pad becomes a different chord in the chosen key, organised into rows covering triads, sevenths, ninths and sixth ninths. This is an astonishingly creative tool for writing strong chord progressions, even or especially if you have no pre-existing knowledge of music theory.

There are two other chord modes, User Chords, which lets you assign a chord of up to six notes to each of the 16 pads, and Fixed Chord, where you play a chord shape and can then transpose it freely by pressing the other keys. Having three different modes is marvellous, whether you want to put down a traditional chord progression quickly, build an intricate palette of chords, or do some classic house-style one-finger chord playing – or even a mixture of the above. There are a lot of inspirational options to play with here.

Scale mode allows you to specify a root note and a scale or mode, with the choice of minor, major, dorian, mixolydian, phrygian, harmonic minor, and major or minor pentatonic scales. Then, when you play the keys, all notes snap to the closest correct note. It’s yet another fantastic function for less-skilled keyboard players.

There’s also a comprehensive arpeggiator that includes seven modes: Up, Down, Up/Down, Played, Random, Chord and Mutate. The first four are self-explanatory. Random indefinitely plays the notes of your selected chord in a random order; Chord rapidly re-triggers the whole chord; and Mutate allows for experimental patterns using the Mutate knob, which yields increasingly chaotic variation as you turn from left to right. When you’re happy, just stop turning the knob. There’s an equally diverse range of options for rhythmic settings too, including triplets, different patterns of rests between notes, a Random setting, and the Deviate mode, which seeds a new pattern every time the deviate encoder is moved.

Having such a wealth of creative options that make solid musical sense is an obvious plus point. Often, chord and key modes can be restrictive, and only work in a one-dimensional fashion. But the Launchkey MK3’s Scale, Chord and Arpeggiators modes are all terrifically powerful, and will undoubtedly inspire users. 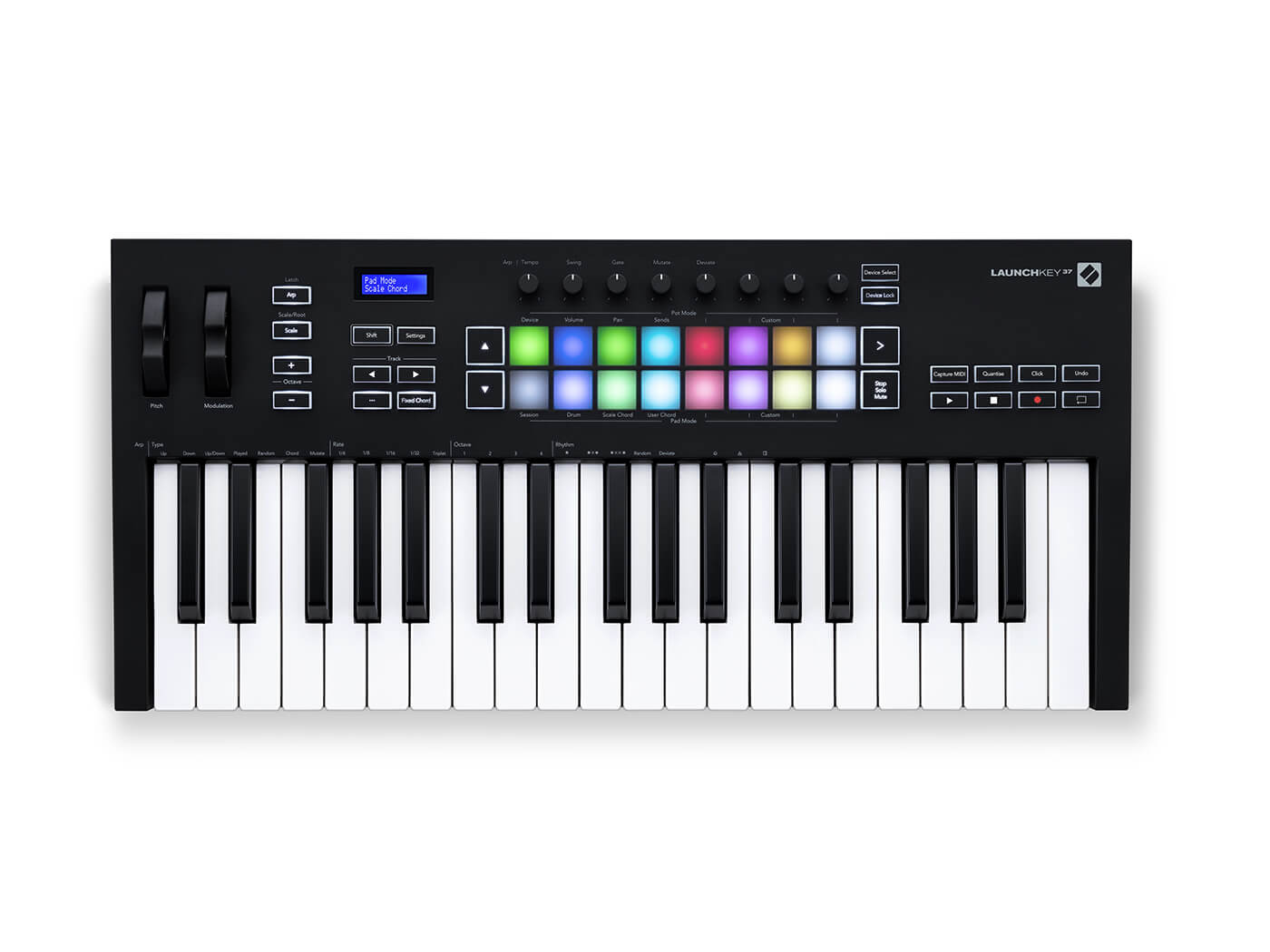 Due to the MK3’s relatively light weight, it will prove particularly beneficial for mobile musician and producers. That said, we found that our featherweight LK49 review unit would slide about a bit on the keyboard stand. Though this wouldn’t be an issue were it sat flat on a desk with its protective rubber feet grounding its position.

If you’re in the market for a well-built, feature-packed keyboard controller (who isn’t?), we compel you to consider the new Launchkey. Its keys are incredible and the whole unit feels premium. If you’re compositionally jaded or have fallen out of love with your setup, launch the Launchkey’s Chord and Arpeggiator modes, and you’ll soon be in full flight once more. The seamless Ableton Live integration is a standout feature too, while the other features work flawlessly in all the other DAWs as well. Providing far more than just a standard controller keyboard, the Launchkey MK3 is another win for Novation. 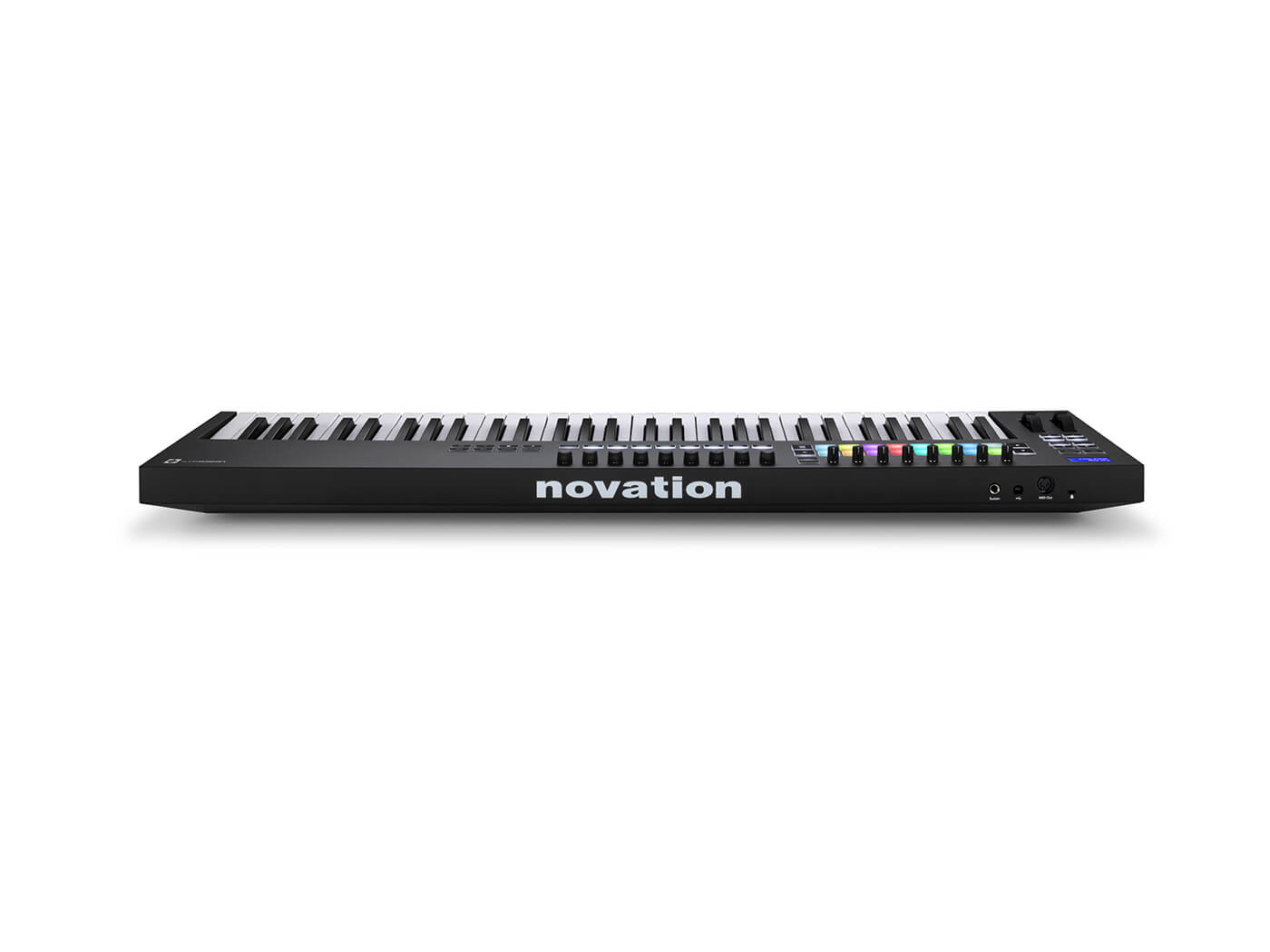 Novation’s Launchkey MK3 is the very definition of an innovative modern-day controller keyboard. Its full-size keys and well-placed rotary encoders and faders make it tactile and enjoyable to use, while the Arpeggiator, Scale and Chord modes make playing sensationally simple and rewarding, especially for beginners. But this is a product that’ll provide lots of inspiration for experienced producers and keyboard players too.

The build quality is splendid and the bundled software provides all you’ll need to get started with instruments and effects. The Ableton integration is exceptional, and the integration with other DAWs via HUI is decent too. If you want a controller keyboard for Ableton Live, this should be your foremost consideration, especially given its four size options. 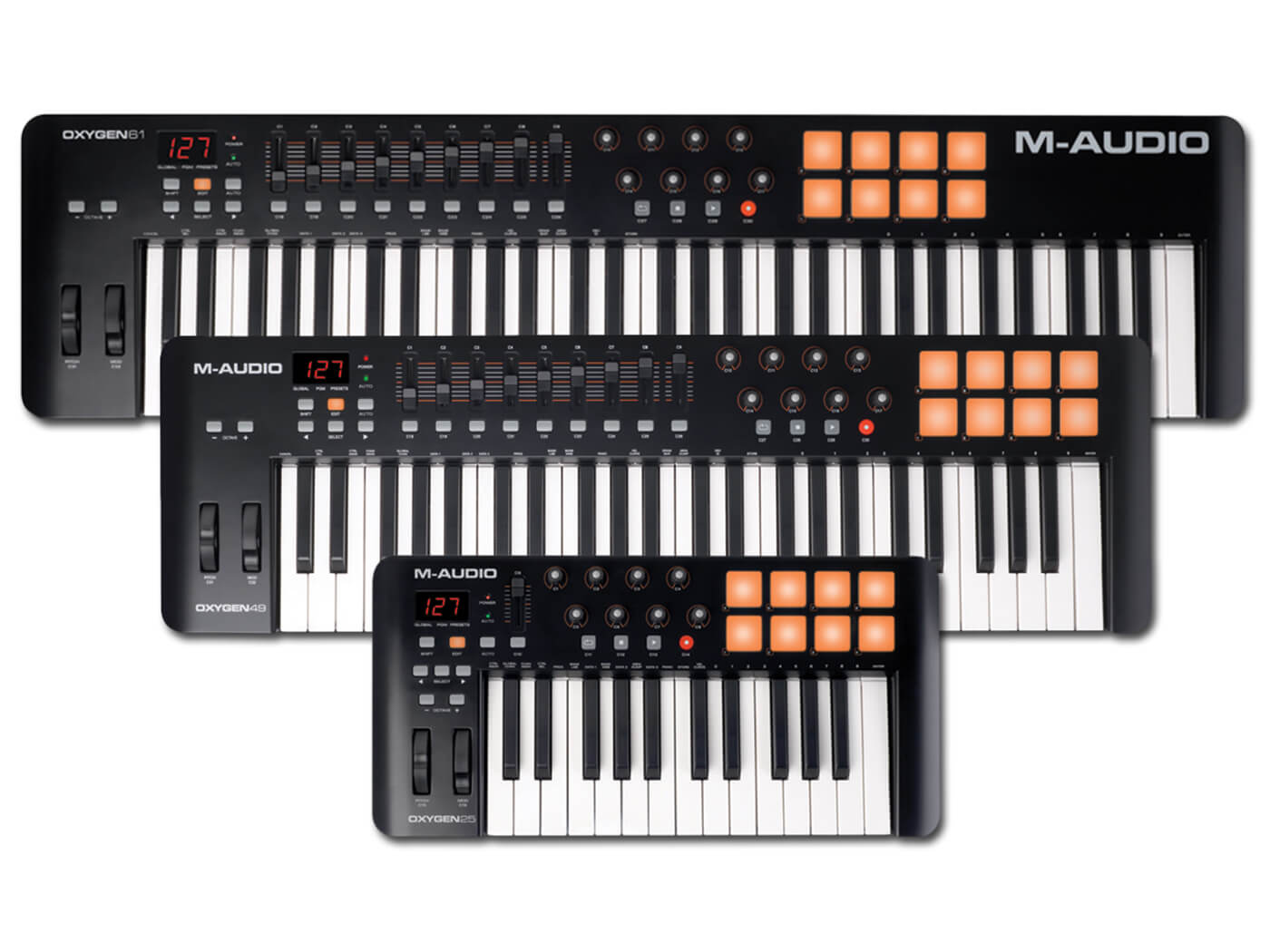 This range also features 25, 49 and 61-key models, with velocity-sensitive keys and pads, as well as nine assignable faders on the two larger models, DirectLink automatically mapping controls to popular DAWs, and a slew of bundled software and samples. 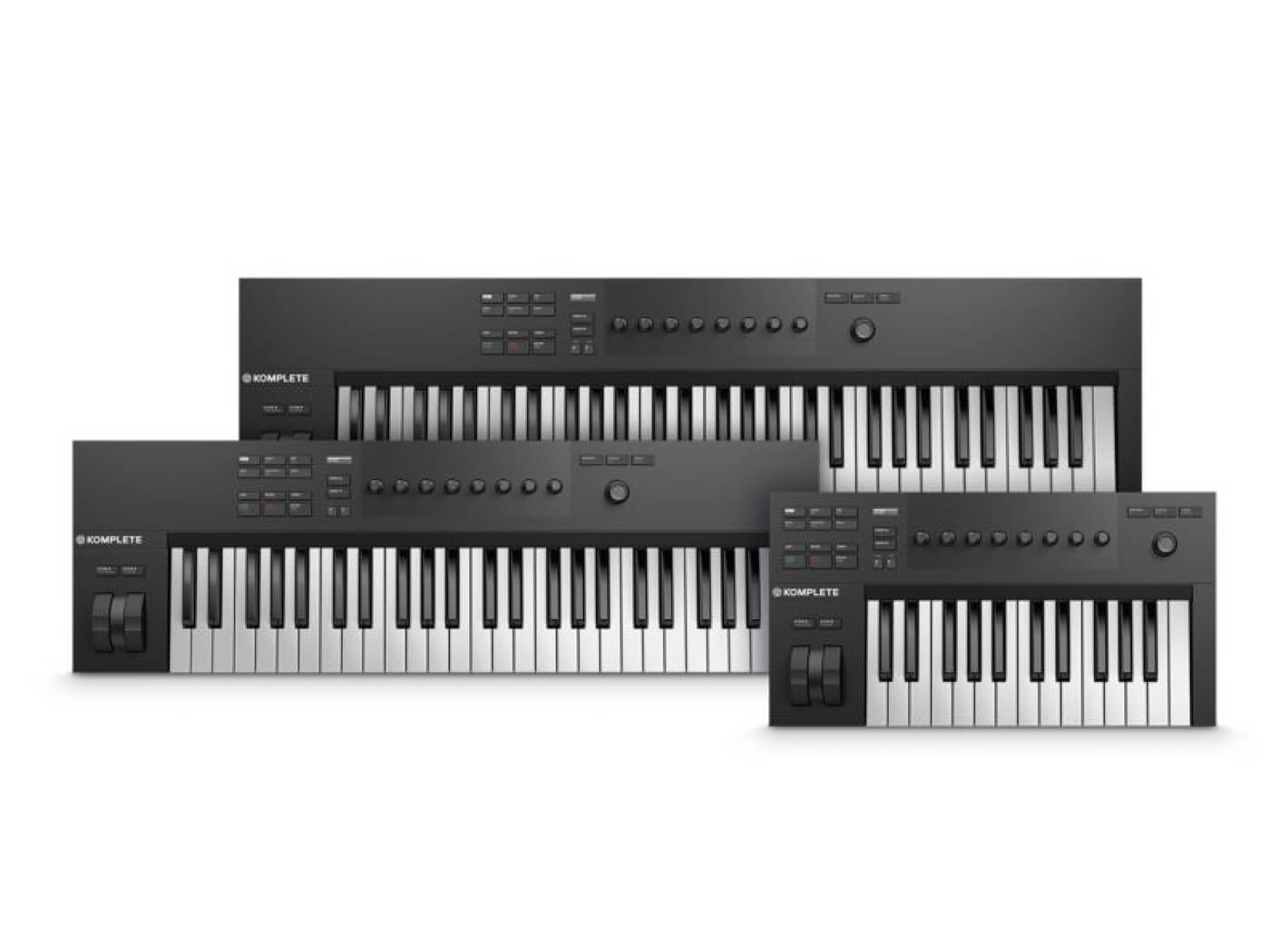 The A series comes in 25, 49 and 61-key sizes and boasts semi-weighted keys, integration with Maschine, Ableton Live and other DAWS, alongside smart play modes and a large selection of bundled software.