This tone source claims to take modular polyphony to new heights. We scratch the surface of this feature-packed Eurorack oscillator. But does it satisfy? 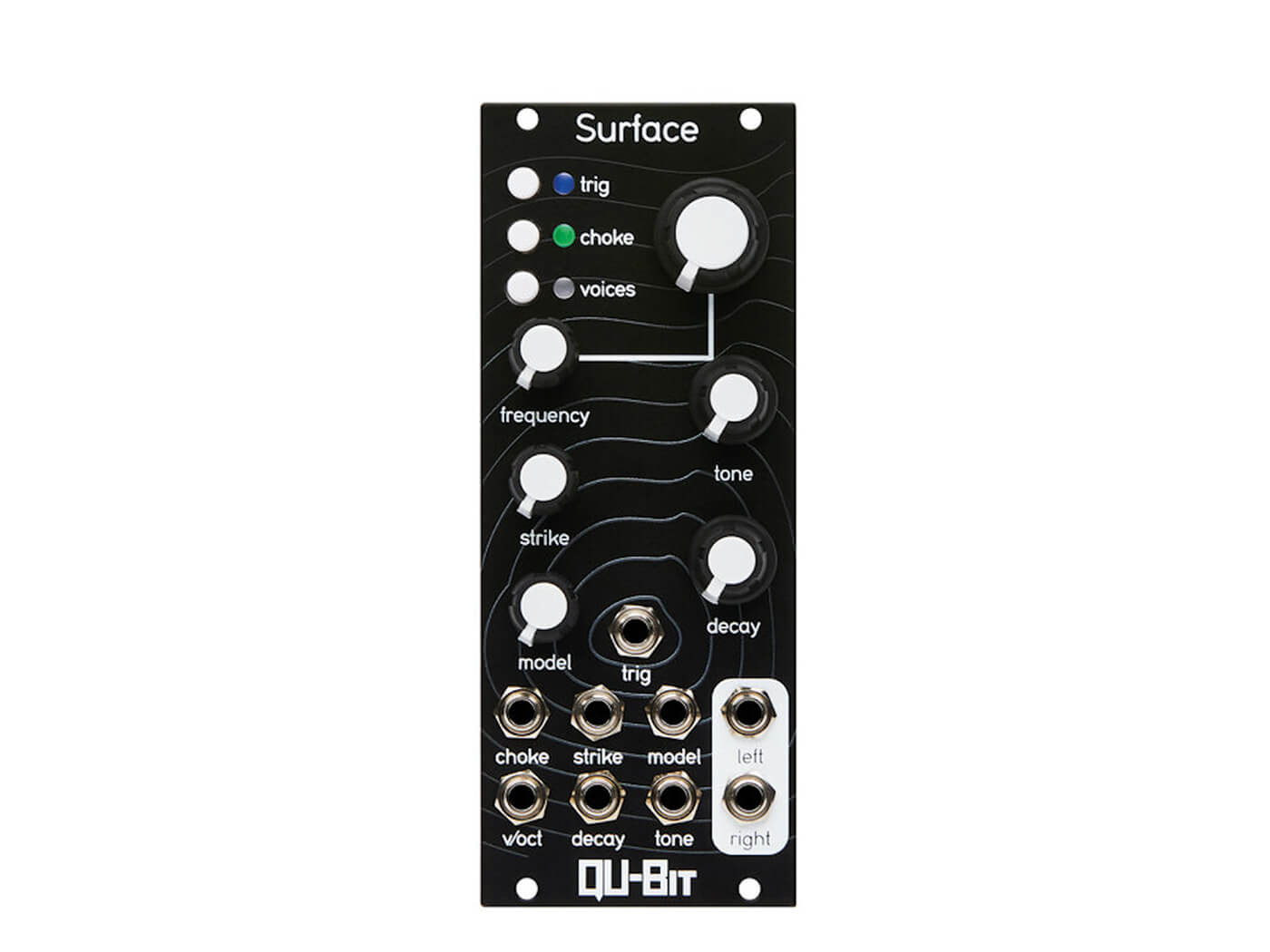 Modular synth designers continue to uncover new methods of creating sounds. One company that has always looked at the Eurorack world as an open book is Qu-Bit. Its unique brand of modules, which often rely on digital technology, do things that would not normally be possible within the modular construct. One such thorny topic is polyphony. Qu-Bit’s existing Chords v2 module can bring complex chordal structures to a skiff near you, without the need to employ an orchestrator with modular tendencies or VCOs.

Following this trajectory, Surface throws up yet another view on creating polyphony in modular, combining a tonal source with basic envelope capacity and the ability to create dreamlike music, alongside grit and FM-style angst. 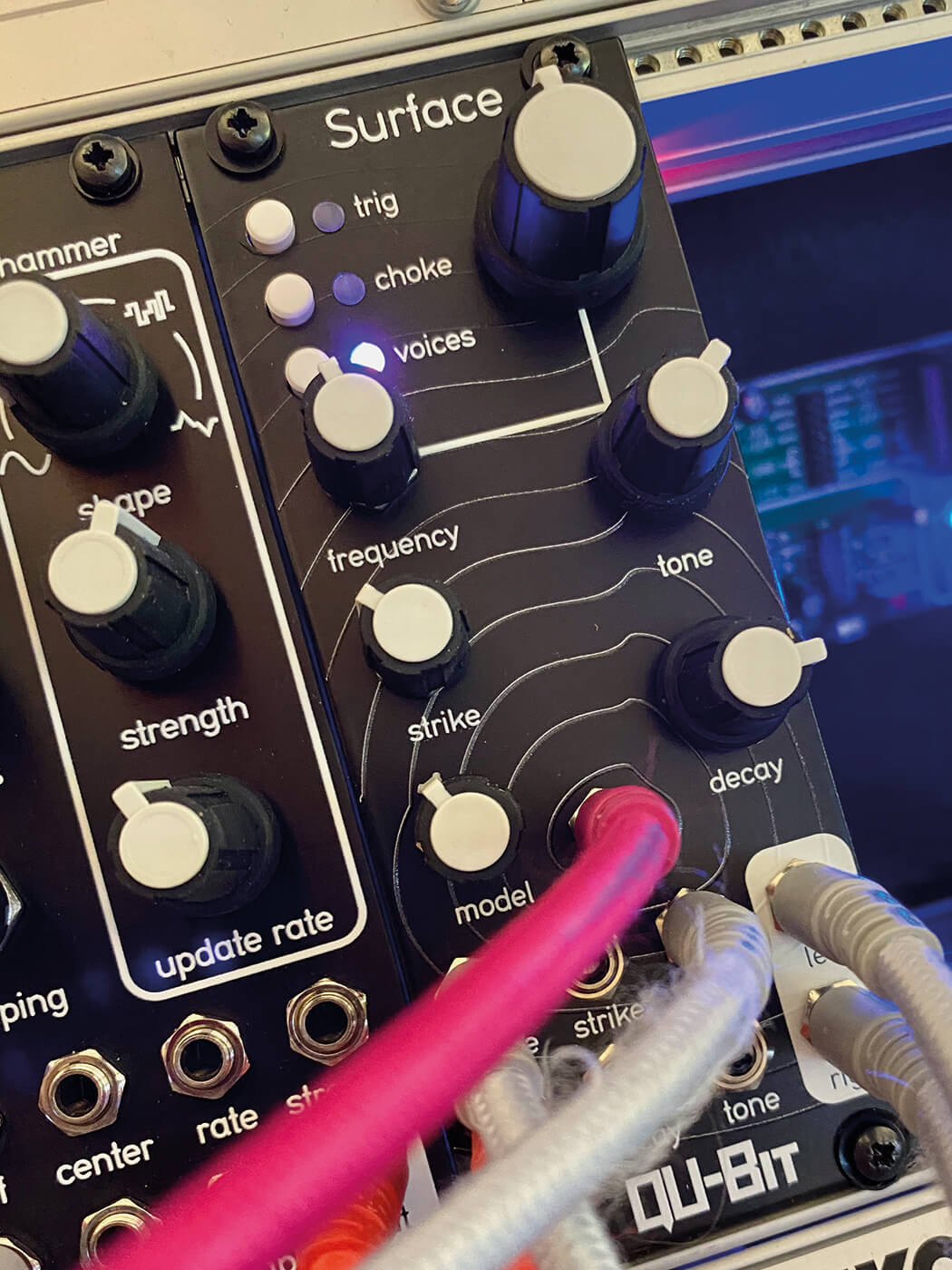 At its heart, Surface is a digital oscillator, which is better described as a modelling voice. Surface delivers seven modelled-voice menus, which include plucked strings, prepared piano and melodic percussion. There’s considerable tonal variance within each model, attained via the tone pot. The properties delivered here are dependent on the model. In the case of the plucked string model, for example, it affects the tone’s brightness. Alongside this, the Strike control dictates the strength of the attack. There’s also a decay control, which sets the amount of time the chosen timbre will take to dissipate, and can extend up to 10 seconds on models such as the plucked strings. The decay element also does away with any formal requirement to place conventional envelopes alongside the Surface when connected to a VCA. Taking care of such functions in-house is particularly handy once you start to veer into the realms of polyphony.

But before we get to that, let’s consider the sound of Surface. Unsurprisingly, it bears a striking similarity to the rest of Qu-Bit’s output. The firm always places a great deal of emphasis on its reproduction quality, and Surface not only chimes in a fashion that rewards clarity but can also be exploited to demonstrate real grit.

With all of the aforementioned tone-selection and control pots open to CV control, it’s easy to take whole sequences and place their timbral palettes under CV control in either an organised or a randomised fashion, the latter being a favourite of Eurorack users. Moreover, Surface is equipped with a Dark Mode, which offers additional functionality throughout the module. In the case of the tonal models, this gives the same categories additional grit and colour or, as Qu-Bit describes this setting, things that “don’t blend as nicely” and have a greater sense of tonal exaggeration. Essentially, Dark Mode adds yet another layer of sounds to call upon.

Once Surface has been triggered, you can start to explore its polyphony. To be clear, this does not turn Surface into some form of 1980s polysynth. But what it does do is allow users to dictate how the notes being played will behave, whether they ring on
or decay. If Surface is in mono mode, each note will cut out the last as it plays, in the same time-honoured fashion that any self-respecting monosynth might.

Increase the voice count, however, and those notes are afforded the space and time to ring out and decay naturally, up to a maximum of eight notes. You can apply settings that allow for two-note or four-note polyphony too. If you have an arpeggiated sequence with eight notes of polyphony, for example, each note will naturally ring out as dictated by the decay control, creating a harp-like chordal effect.

If used with a sequence, the outcome is equally beguiling but, depending on your chosen riff, things can get cluttered and discordant fairly quickly. This is where your control of the decay becomes paramount, although the useful choke control will kill any chordal overspill quickly too.

Selecting the ringing voice count means cycling through one, two, four and eight voices, respectively, before returning to one again. This is indicated by the colour
of the LED, next to the Voice button, and is one of the few operations not open to CV control. We’re not huge fans of modules that see mode selection monitored via LEDs, as it can be difficult to remember which colour applies to which setting while on stage and in the heat of battle. But in Surface’s defence, it’s easy to ascertain which mode you’re in here, simply by listening to it at work.

The polyphonic nature of Surface can quickly multiply user and listener interest, as it increases the harmonic possibilities of any Eurorack system. It sounds so unique that,
in other quarters, we’d wager you’d need several modules to achieve similar effects, at least to this degree of complexity. 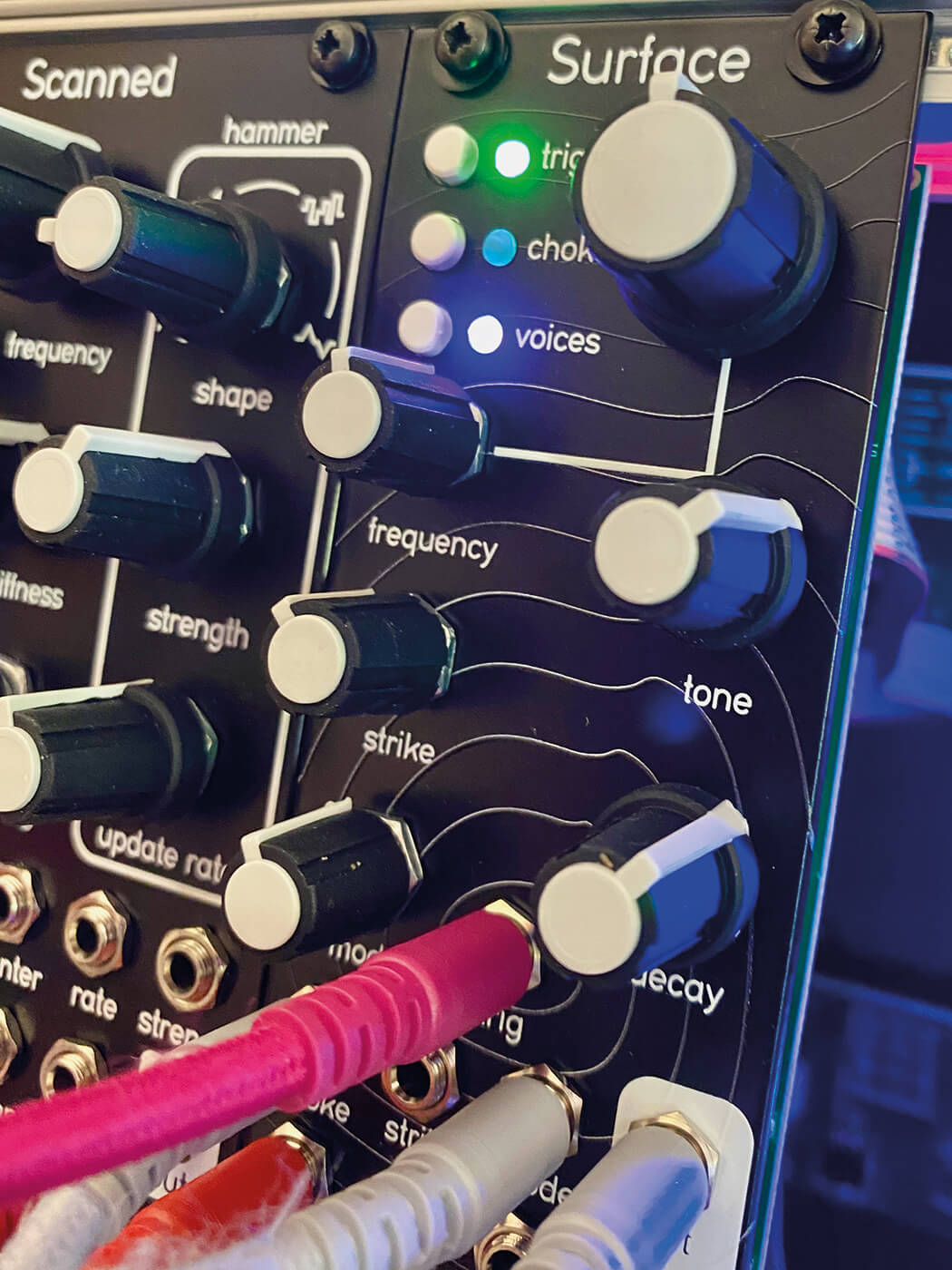 Eurorack is traditionally mono-based but Qu-Bit has a history of modules that provide some form of stereo playback. Surface not only offers a stereo output but also three stereo modes for added interest. While the initial sounds are mono, the output mode allows voices to be randomly or sequentially output from one side or the other. Factor in Surface’s ability to hold onto decaying notes and you’re looking at a large canvas through a very wide panorama. The Stereo mode is another parameter not open to CV control but once you’re used to working in stereo, you’ll want to exploit this effect as a backdrop for centralised sounds anyway.

This is yet another Qu-Bit module that calls upon time-tested principals but applies them in a way that’s not only beautiful but musical. This is important, because modular systems have limited musical appeal, and extending that beyond groove-box-style tendencies is essential for the development of modular-based music. With Surface, you get a double whammy thanks to its stereo and polyphony functionality too, and you can be sure of Qu-Bit’s excellence in build quality. For such a reasonably small module, Surface has plenty of sonic and musical potential, plus a crisp sound quality and unrivalled stability. 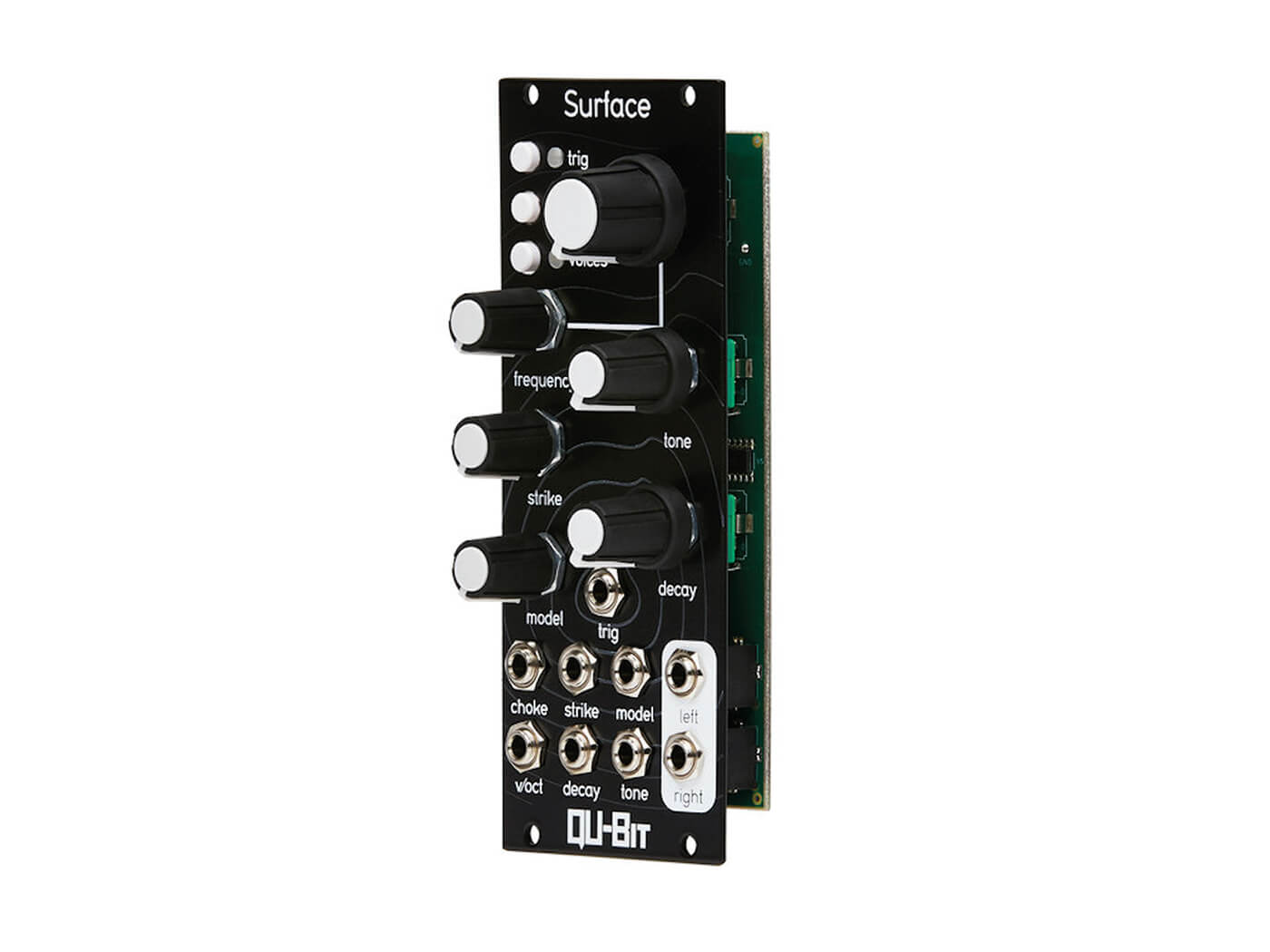 Surface has plenty to offer anyone new to modular and those who are looking
to expand their oscillator repertoire. As a modelling oscillator, Surface offers sectionalised diversity that can be controlled radically or subtly, depending on requirements.
Its added polyphonic operation increases its potential usage when it comes to instant backdrops to modular compositions too.

Alternatively, you can use it in mono mode, as a more traditional VCO. The stereo operation provides instant colour and gratification, with Surface taking up the slack, making the process simple and intuitive. Couple this feature set with Qu-Bit’s reliable build quality and design, and you have another highly desirable module on your hands, useful across multiple settings.

This module provides three timbral elements to create a powerful modelled voice. Its bowed, blown and percussive tonal models are fed into an exciter and reverberator section for abstract sounds.

This versatile oscillator is based around four voices, which can behave and trigger independently or be summed to create a large sound at source, and it has an arsenal
of wave content.