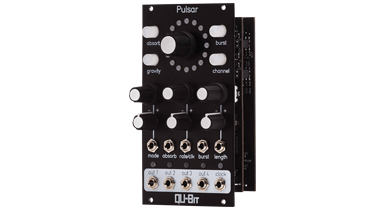 The latest module from Qu-Bit Electronix has some seriously stellar credentials. Dave Gale heads into the cosmos to examine some starbursts… 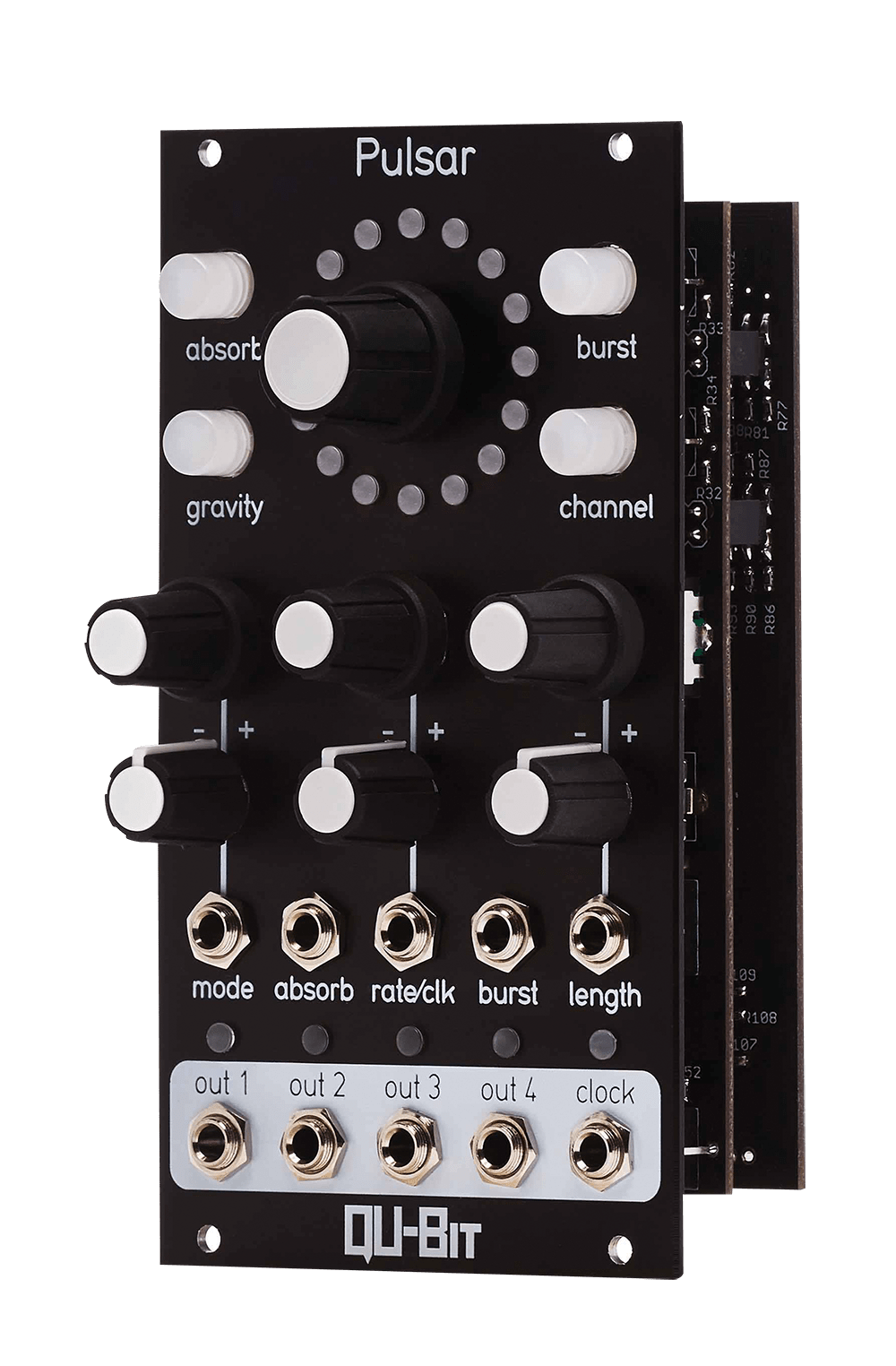 To say that Qu-Bit is on a roll could be considered something of an understatement, and when faced with this latest Eurorack offering, it’s very clear the company is aiming high. Starting with the product description: “Pulsar is a burst generator inspired by stars that output beams of electromagnetic radiation in space. Once keyed, a stream of triggers is dispersed across four outputs.”

It feels to me like someone at Qu-Bit may have been inspired by Stephen Hawking’s A Brief History Of Time, as they go on: “Environmental factors like absorb and gravity alter the behaviour of each burst and affect its movement through time.

Eight unique dispersion modes provide a range of stream types, including Euclidean, binary, random, and fractal. Galactic clocks for the Eurorack system.” So having cleared that up, let’s attempt to observe the Pulsar from back down here on Earth.

Across the bottom of the Pulsar are four outputs, each an independent channel that offers the same functionally in each case, with a fifth socket offering Clock output. The Pulsar will use
its own internal clock, but can also be clocked to an external source – at which point, the clock output rather usefully transforms into a Clock Divider/Multiplier.

The four main outputs essentially emit gate triggers, with the mode of ‘burst’ being assigned from the Mode pot, with further tweaking available in all cases, via the deliciously inviting Master Encoder, which sits right in the centre of the module, surrounded by a circle of LEDs.

At the start of each burst, a single rotation of the LEDs takes place, with triggers occurring with each illuminated point on the LED circle. The LEDs also change in colour, according to the selected channel, each of which has its own colour assigned.

This can cause a small amount of confusion, as it’s not immediately obvious which colour relates to which channel until the lights start to flash – at which point, the circle of LEDs will match the corresponding colour of the LED residing next to the output socket.

It’s a classic case of ‘once you’ve got your head around it, it makes more sense’, as is the case with the selection process relating to the mode of burst, which is indicated via the quadrant of the Master LEDs, which are illuminated. Once you do have a basic grasp of the operational side of Pulsar, it starts to deliver: in fact, it does so in such a way that it’s a pretty unique piece of kit, lending itself to further extend some of the functionality previously seen in Qu-Bit’s Nano Rand.

The functionality of each trigger burst can be switched between four main burst types, namely Sequential, Euclidean, Binary and Random. These can then, in turn, be altered in a number of ways, dependent on each mode type. This includes manually switching bursts on and off, or in the case of the Binary and Euclidean modes, altering the dispersal pattern, with all of this manual control also available to CV control, with onboard attenuation.

In all cases, some lovely patterns are available, but they do tend to have a regularity of step and rhythm – which is what you would expect – so Qu-Bit has placed a tempting Gravity button on the front, which, much like its counterpart on terra firma, will have the burst escalating and accelerating before an inevitable stop.

This quickly became something of a favourite, with considerable possibilities for interesting movement; especially when you consider it’s possible to have four of these simultaneously, all with different timings or burst types, and all available to trigger from an external jack point… although this is global, and not on a per-channel basis.

Applying the four channels across the full modular, it’s easy to get some great rhythmic effects going very quickly. Locking to a central clock, it’s also easy to place some of the timings in just the right place, to get elements to sit just-so, on the back of the modulars timing. It’s more than just polyrhythms here, which would indicate a sense of common regularity.

With the ability to tweak timing and burst on each channel, things can get pretty complex, and then there’s the glorious Gravity, which just adds a nice sense of movement, akin to the classic ‘bouncing ball’ available through Serge-like devices.

If you like rhythmic triggering and feel that your modular is a little too metronomic, this is worth a look. There’s plenty of scope for interesting drum triggering, but moreover, it can be used in conjunction with devices such as envelopes to trigger and get notational movement, with the added use of a quantiser. 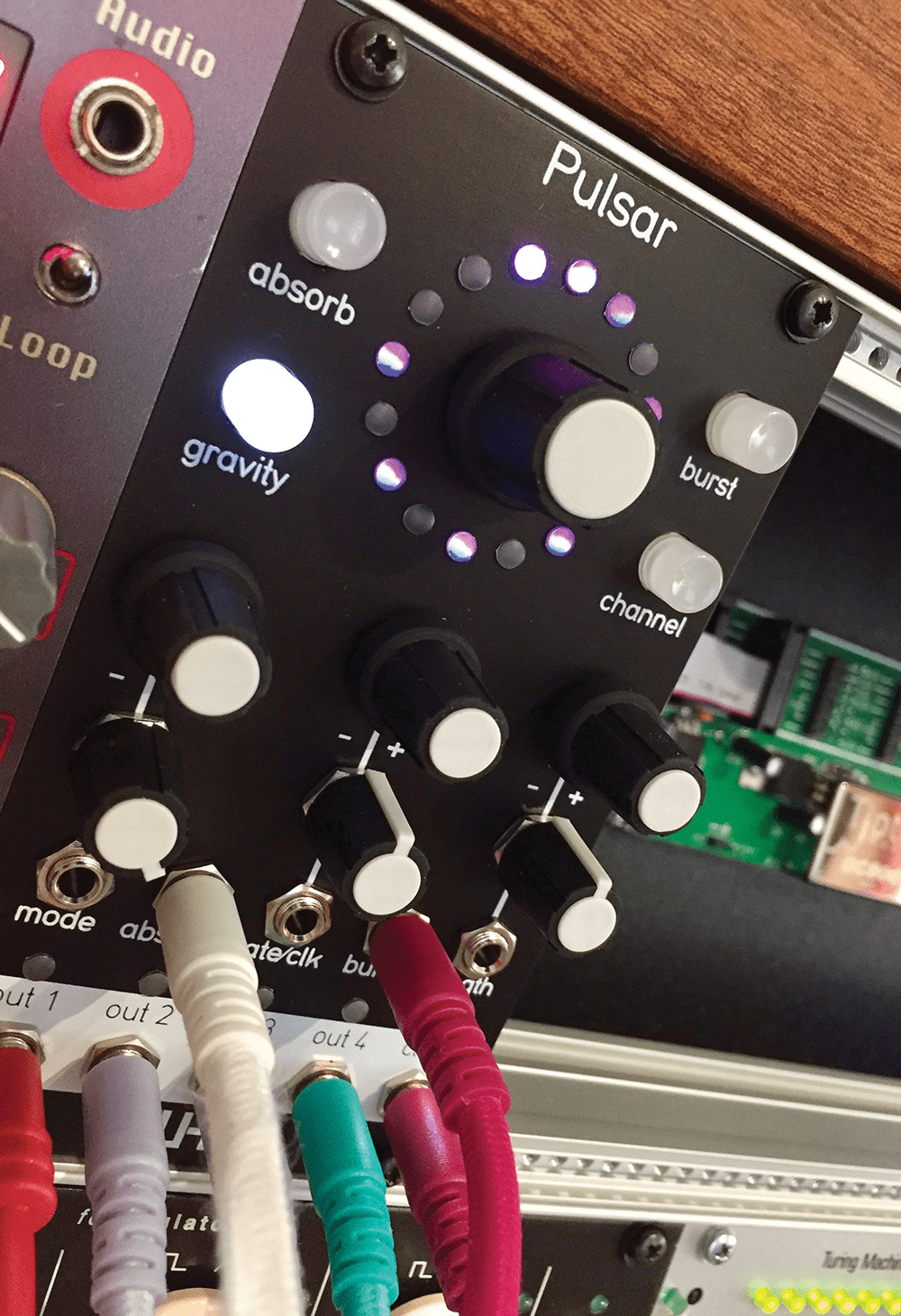 I can see this having uses in so many genres of electronic music, from ratcheting in more classic prog-rock, through to finding a use in spacious and more ambient music.

This is something of a unique module, which offers plenty of scope for interesting trigger-based content, although in many respects, it’s a shame that there is no linear CV-based content, as I would love to be able to control pitch directly from the Pulsar, in tandem with the rhythm bursts. Also, it’s a little fiddly to use at first, especially if, like me, you tend to dive
in before reading the manual.

I found I needed to do a reset, after my initial noodlings, as my Eurorack and I ended up in an uncharted sonic sector, entirely lost in space. This is testament to how much the Pulsar delivers, as it is built on layers, but thankfully, these layers are mirrored, so can be applied on a per-channel basis.

Finally, I must add that, in keeping with Qu-Bit’s established aesthetic, the form factor is larger than other modules, but all the better for it in my view, and built to last – with sturdy attention to detail. It’s also available with a black or silver panel, with the black panel possibly showing the LEDs to greater effect.

Overall, Qu-Bit’s Pulsar is a very unique take on the trigger idea, and personally, I love the space analogy, whatever you make of it. Strangely, given the inclusion of gravity, this module is far from down to Earth – if anything, it’s more inclined towards looking to the stars… 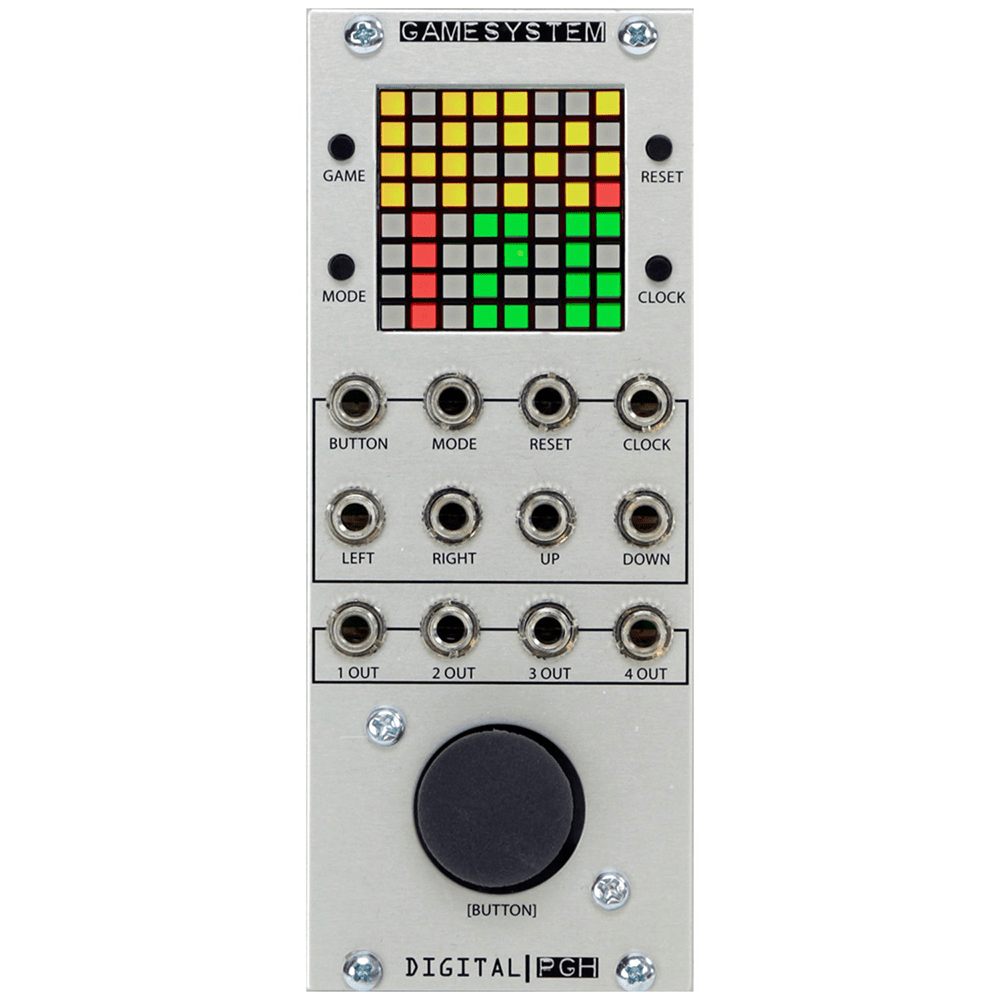 is packed with 6 modes of operation, including step programmability and various modes of random CV/Gate generation. Both flexible and useable. The classic 80s game styling makes it an especially appealing bit of eye-candy.

The ever classic Turing Machine module, now in its Mk2 incarnation, is sold new as a kit, however plenty are available pre-built through the usual on-line auction sites. Look for the expanded versions.