As any seasoned mastering engineer will testify, true loudness isn’t created simply through heavy compression and limiting, but also an acute understanding of the role that timbre plays in our perception of amplitude. Dynamic Spectrum Mapper (DSM) V2, therefore, sounds like an intriguing product, combining elements of compression and equalisation in a single, highly innovative […] 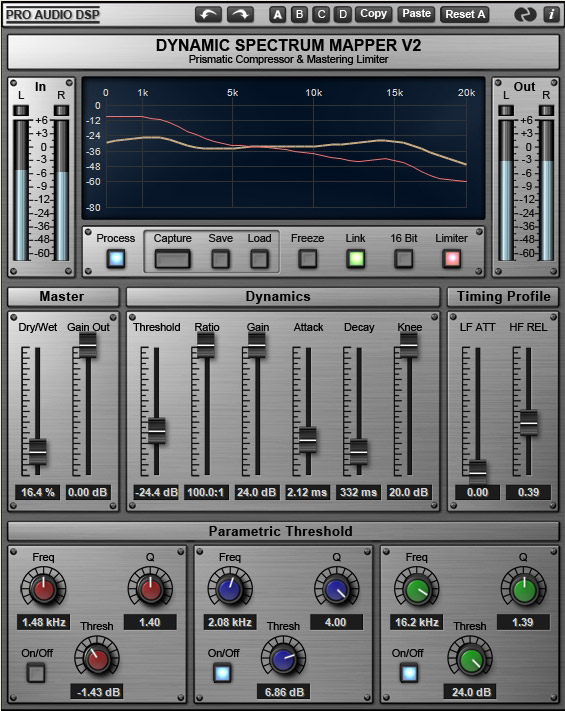 As any seasoned mastering engineer will testify, true loudness isn’t created simply through heavy compression and limiting, but also an acute understanding of the role that timbre plays in our perception of amplitude. Dynamic Spectrum Mapper (DSM) V2, therefore, sounds like an intriguing product, combining elements of compression and equalisation in a single, highly innovative plug-in. In truth, the plug-in is actually a whole new class of signal processor in its own right – a ‘spectrum-mapped’ compressor, to give it an appropriate title. But is Dynamic Spectrum Mapper V2 a valid and useful tool to have at your disposal?

On first impressions, Dynamic Spectrum Mapper V2 looks somewhat like a hybrid of a compressor and an equaliser, featuring real-time frequency analysis and familiar parameters such as Threshold, Ratio and Gain Makeup. Looks can be deceptive, though, as what’s going on ‘beneath the bonnet’ is far more intriguing than its interface might immediately suggest.

The first point to note is that DSM V2 has the ability to capture a spectral profile of an incoming signal, whether it’s the track you’re trying to process or a commercial recording used as a reference source. Once this spectral profile has been captured, though, things get really interesting.

In effect, the plug-in works like an ‘infinite-band’ multiband compressor/limiter, with the threshold effectively set by a spectral map that you’ve previously created. When any frequencies exceed the existing spectral map, compression is applied, thereby controlling both the dynamic and timbral qualities of the signal you’re trying to process.

Using the plug-in for the first time takes some adjustment, but if you listen carefully you can soon start to identify the unique dynamic and timbral treatments it’s capable of. You can capture a spectral profile in seconds – simply by clicking on the capture button – or you can hold down the button to acquire a more averaged set of readings. It’s also worth noting that the plug-in comes with a huge range of presets, all with existing spectral profiles that can be used as a means of processing your own music.

Once you’ve acquired the spectral profile it’s largely a matter of adjusting the Threshold parameter and various other compression controls to initiate the Dynamic Spectrum Mapping process. As you move the Threshold you’ll see the fixed yellow threshold spectrum (the captured material, in other words) interacting with the dynamic blue curves, illustrating the spectral and amplitude characteristics of the current programme material. As the blue-coloured programme line moves above the yellow threshold spectrum, you know that the process is starting to happen (assuming you have Ratio greater than 1.00).

The big question, of course, is what Dynamic Spectrum Mapper V2 actually sounds like, and what practical applications the plug-in can be applied to. Sonically speaking, there’s an obvious parallel between Dynamic Spectrum Mapper V2 and the strategic combination of transparent compression and some intelligent equalisation. A degree of dynamic control is evident, but without the pumping artifacts you’d associate with a traditional compressor; equally, the spectral profile can also sound tighter and more defined than the source.

Although the immediately obvious application of the Dynamic Spectrum Mapper V2 is as a mastering processor, it’s interesting to note one of the other principal applications – de-essing. In the case of de-essing, the spectral plot should be captured ahead of any unwanted sibilance, so that DSM V2 gets some understanding of a ‘normal’ vocal sound (the plug-in also comes with some preset vocal spectrums, if you’re in a rush). With the spectral profile in place, any sibilance will force DSM V2 into compression, attenuating the narrow frequency band the sibilance resides in.

As well as the controls we’ve mentioned, there are plenty of detailed features and functions that really extend what this intriguing plug-in can achieve. The Parametric Threshold controls, for example, enable you to fine-tune the spectral plot – an intriguing feature that feels (and looks) like equalisation but, of course, is actually a means of affecting how DSM V2 applies compression. There’s also a  built-in limiter and a 16-bit Dither option, which arguably makes DSM V2 an ideal plug-in to have at the end of your insert path, ahead of bouncing the final master to disk.

Although we’re always wary of silver-bullet ‘sounds-better’ plug-ins, there’s no denying that DSM V2 offers some unique ways to improve the punch and presence of your audio. In mastering, Dynamic Spectrum Mapper V2 really shines, offering a useful alternative to EQ and multiband compression that in many cases leaves a surprisingly transparent fingerprint devoid of excessive pumping or unpleasant phase shifts. Of course, it isn’t a treatment that’s warranted on every track – and indeed, we’d argue that the sound of traditional compression and EQ still works well when applied in the right way. Dynamic Spectrum Mapper V2 isn’t a universal panacea, therefore, but a useful alternative when other methods don’t deliver the right results.

Some of the most interesting applications of Dynamic Spectrum Mapper V2, though, fall outside the conventional tasks of mastering – like the aforementioned de-essing, but also various form of enhancement across the low and high ends of the sound spectrum. Applied to individual sounds, DSM V2 can produce some transformative results that significantly change how an instrument sits in the mix. Like a fine wine, the subtleties and finesse of what Dynamic Spectrum Mapper V2 can achieve is something that takes time to discover, but once you appreciate what it has to offer, you might increasingly find yourself coming back for more…

+ Unique approach to amplitude and timbre

– Takes some time to understand

– Not a replacement for compression and EQ

DSP’s Dynamic Spectrum Mapper V2 is a truly fascinating audio tool that somehow manages to bridge the divide between compression and equalisation.