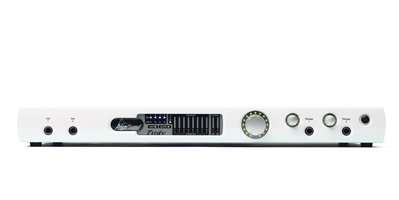 Prism’s range of high quality interfaces is now within reach of many studio users. Andy Jones aims for the high end with Titan…

We recently looked at Prism’s more entry-level and recently price-slashed Lyra USB interface. This month we look at the Titan, very much towards the top of Prism’s high quality audio interface range.

While it’s newer than Lyra, it too has seen a significant price drop, so a unit that was retailing for £3,600 at one time now shifts for a grand less.

That’s still big money, you may think, but as I explained last issue, Prism is all about the quality converters, all about the components, all about the bits and Lyra very much stands out as a simple interface but one with an exceptional sound quality which, like a good pair of monitors, is worth splashing out the cash for the results.

Dare I say that even if the results only represent a 5% gain in quality, that is still worth aiming at because your signal chain is always key to a good recording.

And there’s more
While Lyra is quite a simple interface, Titan is more buxom, boasting lots of ins and outs and a spec more at home with the Orpheus, a Prism interface that is fast becoming a legend in its (underworld) lifetime.

Looks-wise Titan is, as you might expect, similar in elegance and make up to Lyra, albeit in a fetching pure white rather than gold. You get that handy multicoloured LED screen but as there’s more coming into and out of this box, there are more meters within a larger display and more physical inputs on the front (two line) and far more around the back. Here there’s a further six inputs, four of which double as line/XLRs, which have mic pres, and two of which are unbalanced instruments ins.

You get eight outputs plus two sets of headphone outs each with a level rotary. There are also S/PDIF digital and optical TOSLINK in/outputs. The unit also includes Prism’s Multi-Channel Digital IO expansion slot for other host interface formats. ‘MDIO modules of various formats,’ the manual promises, ‘will become available in the future’.

Other points of interfacing interest are the Overkiller feature, which is again present to limit levels on input. There’s also a high pass filter, a useful addition for the mic inputs especially. Finally, each pair of input channels has a switchable MS Matrix, intended for use with mid-side microphones for sum and difference signal processing to create left and right outputs.

There are a gazillion cheaper interfacing options but arguably none carry as much clout in the quality stakes. Of the many out there, I’ve had a lot of good experience with the Focusrite Saffire range plus multiple i/os from Presonus.

Bigger spec, same software
After familiarising myself with Lyra’s mix and control software when testing that unit, it’s pleasing but not surprising that the same software works with Titan. Indeed it boots up automatically as I power up Titan, and looks slightly different colour wise – is that my imagination or are the extra channels fuzzying my brain?

With Lyra this software was used for simple routing and switching but with Titan the software obviously now comes into its own. Examples of what you can do here include being able to route all of the analogue outs to various destinations; switching in the aforementioned M+S feature on inputs; and switching in the Overkiller function. It’s slick and easy, all you need.

Sound wise I get very much the same results as I did with Lyra and they’re superb. I can detect a sheen on my mixes and a rounded feel and detail. Again I must stress that this isn’t as obvious as maybe auditioning a great set of monitors against a bad set, but A-B comparisons with cheaper systems reveal a greatness and fullness to the Titan sound.

And of course with Titan I have extra flexibility to route more of my studio through the interface straight into my DAW. I play the Nord Stage I have on test alongside some recent DAW compositions and I have to say: I sound great!

Titan is very much Lyra on caffeine; great quality and flexibility plus a greatly reduced price. It’ll still seem like a hike for those baulking at three figures for an interface let alone four, but the hike in quality has to be heard. If so, you might be amazed at where you suddenly find the extra cash 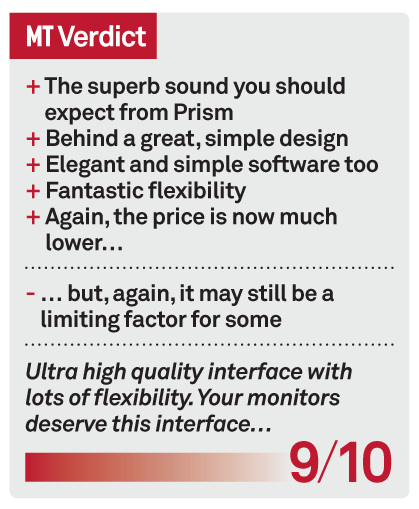