At an all-new low price, is Prism’s Lyra interface now a quality audio interface for everyone to enjoy? Andy Jones has the answers… Details Manufacturer Prism Price £1200 (£1,130 S) Distributor Prism Audio Contact sales@prismsound.com, +44 1353 648 888 Web www.prismsound.com I can’t say enough how important your signal chain is. My one piece of advice to […] 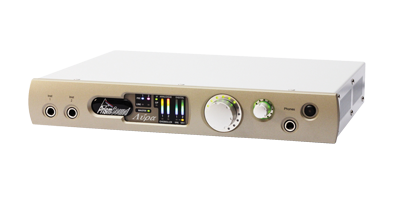 At an all-new low price, is Prism’s Lyra interface now a quality audio interface for everyone to enjoy? Andy Jones has the answers…

I can’t say enough how important your signal chain is. My one piece of advice to anyone putting a studio together is spend all of your budget on it. Get the best mics , cable, interface and monitors that you can afford…

Of course it’s the ‘you can afford’ bit that is the stumbling block for many, and it’s all very well for me saying ‘get the best’ but some of the best really does cost. Enter Prism with its all-new pricing structure…

New Low Price
Prism’s range of interfaces is already well known for its quality – which we’ll come to. At the entry point you get the Lyra, actually two models, with the cheapest one on test here (see Alternatives box for more on Lyra 2).

It used to cost a shade over £1,600 when it was released, but major shifts in manufacturing costs have seen this recently slashed to around £1,200. That’s still pricey compared to some brands, but the Prism range is designed with the best interfacing in mind so here’s what you get for it.

Lyra is based on Prism’s Orpheus interface, one of the most highly regarded out there, but is a cut down version. It’s a USB Class 2 interface for Mac, Android, Windows and Linux. It has two analogue inputs (channel 1 is a line plus instrument; 2 is line plus mic/ XLR) and outs for monitoring.

Mention should also be made of a high pass filter on the input, useful for mic input, and the switchable Overkiller feature on the input which acts as a limiter to prevent input overload. There’s a headphone out with level rotary plus digital S/PDIF via TOSLINK.

While there are significantly less connections than Orpheus, Lyra still boasts the same ‘no-compromise analogue front and back end’ so boasts the same high A/D and bit-rate recording and quality D/A output – the bang your buck is paying for. You get two channels to route in and out and run with your DAW.

An effective display shows what is coming in and out by way of LEDs, coloured green for line, pink for mic or blue for instrument. The mic ones go from pink to red to show phantom power on.

A typical in-use example would be to record vocals or an instrument into your DAW and route the whole lot out and maybe isolate certain parts, say vocals, to monitor on the headphones, all of which routing can be done easily by way of the mixer and control software.

This comes on disc or can be downloaded from the Prism website and is a simple but elegant piece of software that runs with Lyra alongside your DAW (I had Lyra up and running as a straightforward interface with Logic in no time).

Alternatives
If Lyra appeals, you should also check out its sibling Lyra 2 with double the mic and instrument inputs and outputs. Double your routing for around £1700.

At pretty much any budget you can imagine, I’ve also looked at several Saffire interfaces from Focusrite over the last year and you can pretty much choose one according to the cash you have burning in your pocket but the Prism ones do have the edge as far as sound quality goes.

Quality V Cost
Of course, all of this can be done by way of other interfaces costing a lot less, so the Lyra lives and dies by way of its sound quality. I lined it up against some admittedly far cheaper alternatives to see if that particular aspect shone through. I was expecting the results to be fairly subjective but they were so significant that blind testing was not needed so obvious were the differences.

The output levels were far higher on the Lyra (so be careful on first hook-up) but the definition of the mix was cleaner, with placement of some instruments/frequencies more defined – certainly the lower mids shone through more. It was not quite like stepping up to a newer set of monitors – nothing quite that obvious – but you could certainly identify more detail. 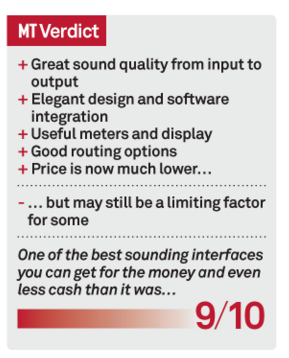