Presonus’ Studio One has come from nowhere and is teaching the big guns of the DAW world a few things. So what needs updating in Studio One 4? asks Andy Jones… Price £344.40 | £128.40 Upgrade Contact PreSonus | Source Distribution Studio One 4 key features: Mac and PC DAW Unlimited audio and instrument tracks […]

Presonus’ Studio One has come from nowhere and is teaching the big guns of the DAW world a few things. So what needs updating in Studio One 4? asks Andy Jones… 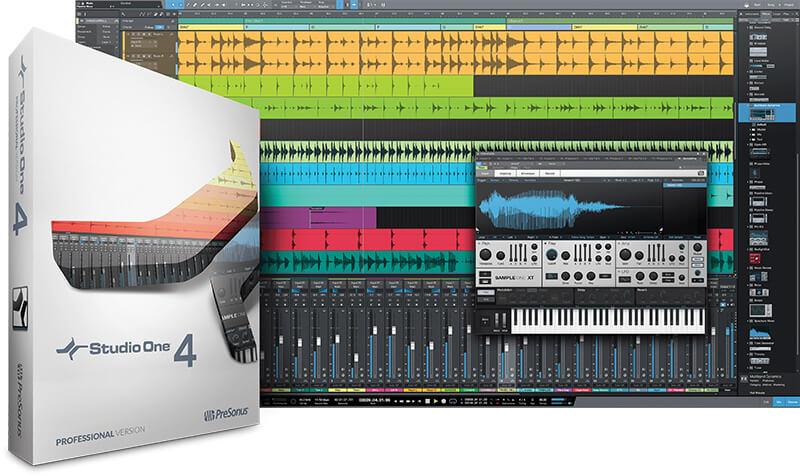 I don’t want to get all ’in my day it was just Logic and Cubase and we made do’ but, rather like TV channels, the number of DAWs we have has exploded in recent years.

Unlike most digital TV channels, though, most DAWs seem to have very good features and are capable of just about any studio task you throw at them. One of these, Presonus’ flagship Studio One DAW, seems to have snuck up on us all from nowhere though.

And even more oddly, it has always felt ’complete’, like a DAW with a long heritage – so much so that it has already become something of a challenge to the mighty Pro Tools in professional circles, certainly over the Atlantic, anyway.

It turns out that, for once, this isn’t just me imagining things, because a quick glance at Wiki (I do it so you don’t have to) reveals that Studio One really has only been around less for less than a decade. And the fact that it was started by a couple of ex-Steinbergers probably reveals why it became the real deal of sequencing so quickly.

The problem with a rounded and finished piece of software, though, is where do you go with updates? Simple, you just make everything easier to use so that your users can, in Presonus’s words, ’work better, faster’. Which brings us to the new version 4.

Thankfully this 4 update is – the old cliché – all about evolution rather than revolution, so we’re not seeing a huge change in looks (thank god) and nor are we seeing an incredible shift in workflow (ditto). What we are seeing are easier ways to program beats and melodies and some of them really are very good indeed.

The main enhancements are to a couple of plug-ins – with the Impact XT drum module and Sample One XT sampler – the addition of Pattern and Drum editing and, possibly my favourite, the addition of a new Chord Track which I’ll detail first. 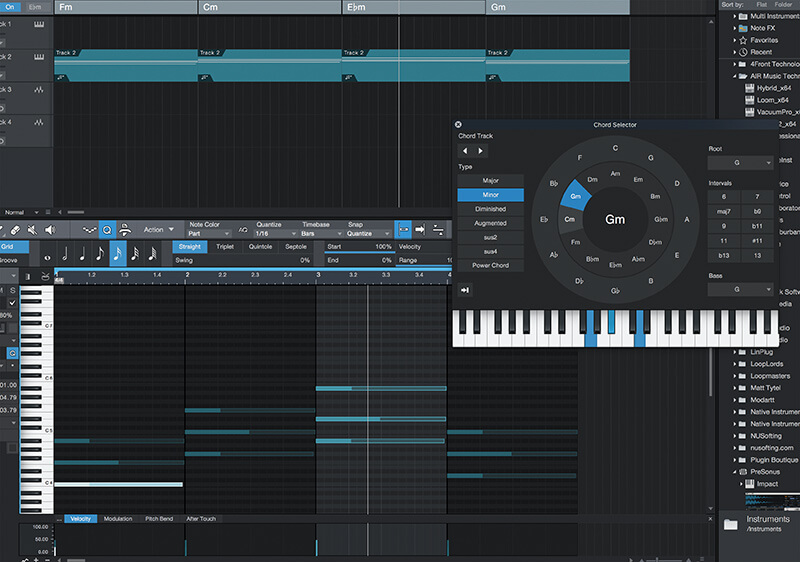 Chord Track is a great feature as it allows for easy harmonic editing and chord progressions. Before you hold your hands up and say, ’that’s not for me, I know nothing about chords or music’, stop! It’s actually for everyone. I’m one of these composers who can quite easily come up with one chord progression but I don’t (whisper) know enough about songwriting to go to many interesting places after that. Chord Track lets you try out options in an instant, but that’s only half the story.

You enter the Chord Track mode by hitting an all-new icon. You can then select chord lengths here by bars or beats and then select the chord that these link to by double clicking to open a neat looking Chord Selector tool. Click on each chord and Chord Selector lets you try out different options for any MIDI chords you have recorded.

However, the best part of Chord Track comes when using audio. For example, I created a MIDI chord progression – and one that I certainly wouldn’t have created not using Chord Selector, I hasten to add – and then loaded in a fairly random guitar strum sample of just one chord being strummed.

After time-stretching the sample so that the strumming was in time I then applied the MIDI chord progression to the audio by selecting Chord Follow on the audio track in the main Inspector. The audio of the guitar strum then changed pretty instantly to follow that of the MIDI progression – very nice indeed. It’s not always perfect, mind, especially if you veer off onto quite experimental chord progressions.

Existing Studio One owners should upgrade for the main features alone, let alone all the extras. But should you cross grade? Well, that is the question: to switch DAW or not. It’s the ultimate dilemma for producers these days and there are so many choices out there. 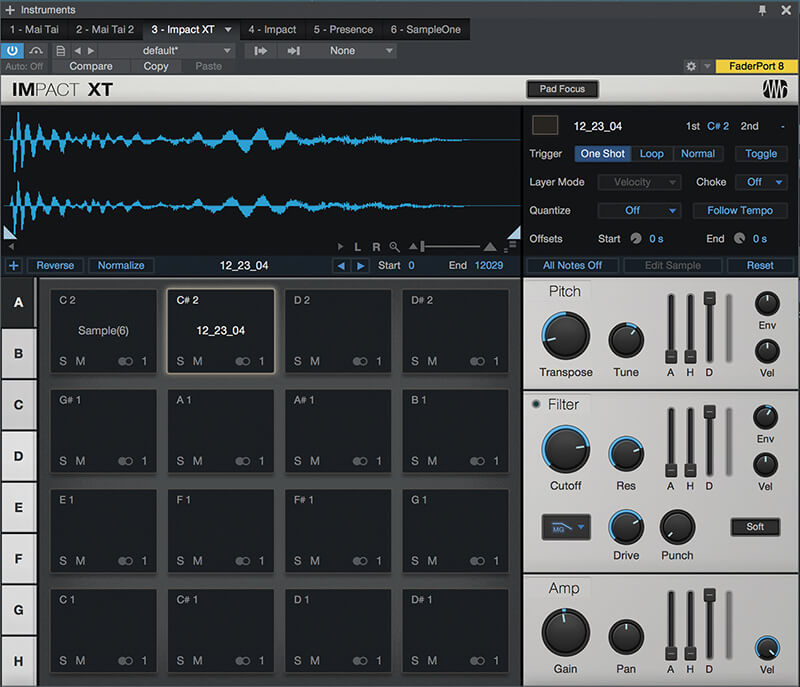 In terms of the user experience with Studio One and the speed at which you can get great results, you’ll only get this kind of result in the slightly different worlds of Live, Reason and FL Studio which are perhaps more loop-based or electronic. In the ’standard’ DAW world, then, for ease of composing, little comes close to Studio One.

Next up and it’s two updates: Impact XT and Sample One XT. Sample One is a great sampler update which now includes two banks of effects which you can toggle on and off and a fantastic GUI which makes all things audio a breeze.

If you just think of this as an old school hardware sampler you won’t be going too far wrong, just one with all the benefits of software. You get instant audio recording and editing on screen, some fantastic synth-like features to mangle your audio including Filter, Envelope and LFO, and some standard effects.

What Sample One XT really does well is bring back real-time ’messing about’ with audio, the kind of thing you might have done when you first got into sample mangling. The waveform is very easy to get in and edit with precision and you’ll soon be mapping, twisting, triggering and affecting audio – the Distortion effect being a particularly welcome addition.

Next up is Impact XT, a similarly designed instrument where the focus is on percussion samples and drum loop creation. There are eight banks with 16 pads each per kit and lots of velocity layering so you can really get in and trigger your sounds dynamically.

Again, you get a nice Filter to adjust per pad, as well as Pitch and Amp sections and a certain amount of sample manipulation (start and end points and looping) can be done via the display.

Impact XT can be used to program beats in the Drum Editor and new Pattern Mode which is a way of programming both beats and melodies in a TR cycling stylee. This is another great new addition to 4.

You start by inserting a pattern to whatever melody or percussion track you want to work on, and then program away, drawing notes in on a grid. This takes Studio One into the realms of FL Studio (the update to which I’ve only recently reviewed so that sequencer is fresh in my mind), which is no bad thing. It’s not as flexible but does bring some instant joy to your composing.

Within a Pattern there are several options to really get creative. You can set Repeats per step for some machine gun-like beat effects or set a Probability level which adds a randomness to the playback, essentially giving you a less rigid set of loops, perhaps even, dare I say, a more live feel for drums.

It’s not just beats you can do this with. Pattern programming works with melodies and you also get the Probability and Repeat options, the latter of which really adds some emphasis when you’re trying to play 10 of the same note within one hit! What is very slick about Patterns is that they co-exist with your standard parts as a kind of faded out ghost that sits on top of them and there’s also a brand new library of Musicloops with drum Patterns and variations so you can quickly get stuck in.

Studio One 3 was already an excellent DAW so not much really needed to change with 4 (and heaven knows what Presonus will do with 5). But the added fluidity that the Pattern enhancements bring makes it even slicker. Best of all are Chord Track and Sample One XT. The former took my chord progressions up by many a level and the latter had me properly playing with audio again for the first time in years.

Really, Studio One 4 is a 1/2 point update as Studio One 3.5 was a major release too but, whatever you call it, it’s a damn good release and it strengthens Studio One’s case at being a first choice option for many music producers. 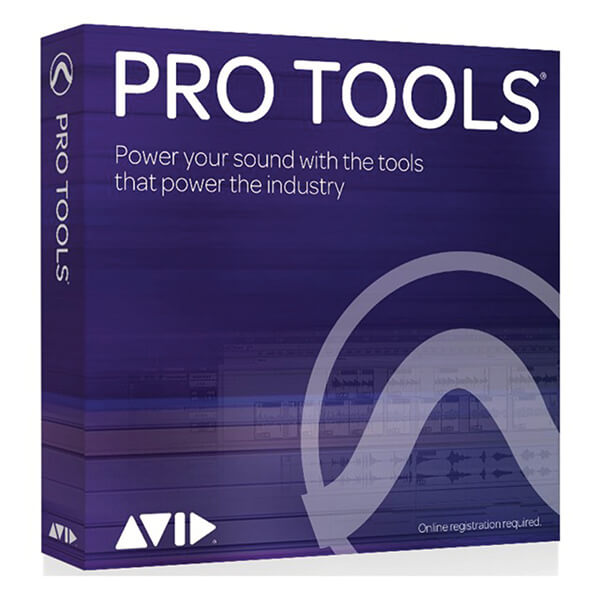 There are many producers choosing Studio One over Pro Tools so you have to include Avid’s. Its quality is right up there and its collaboration features are excellent, although its industry standard rep makes it a little corporate for some. 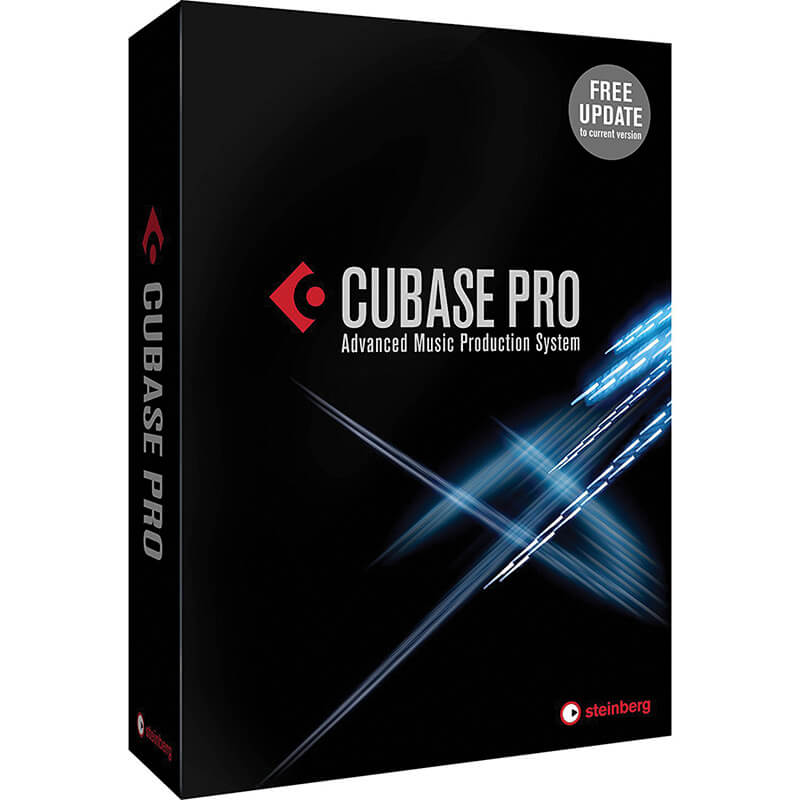 A cross-platform DAW at the pinnacle of its game, Cubase now has as many features behind its slick and customisable interface as any other DAW, although some may prefer the new easy composing features in Studio One 4.