PreSonus’ latest range of USB interfaces ups the ante at the entry-level point of the market and include a huge bundle of software. Andy Jones plugs in… 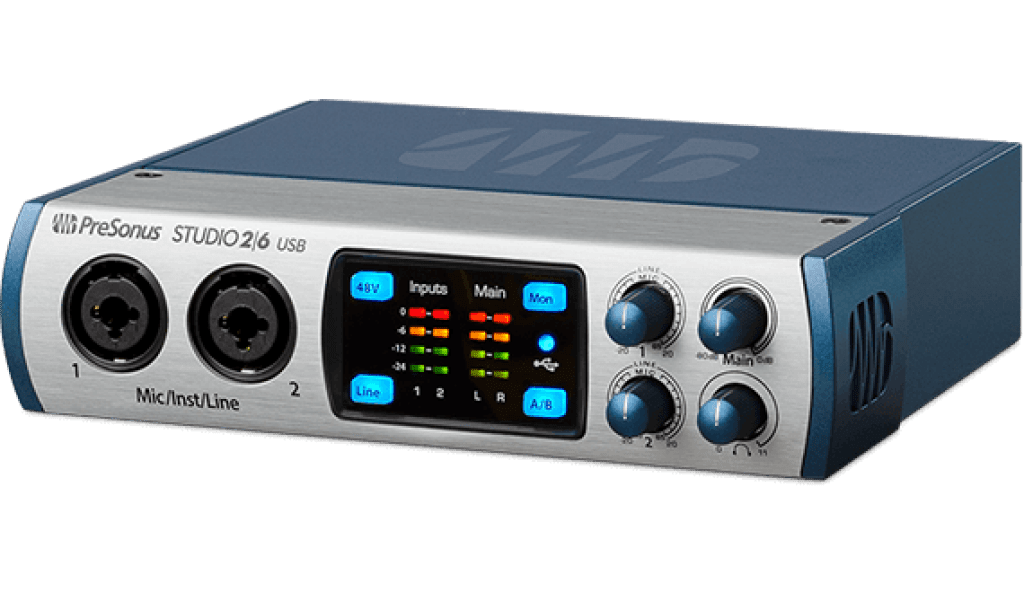 The audio-interface market seems to be heating up to boiling point of late with hardware bundles, software bundles, freebies and discounts. Want a new interface? Have a pair of headphones, too! Why not take this microphone while you’re at it?

It’s great news for us, obviously, although you do get the sense that the music-gear industry is desperately trying to tap into the success of Ed Sheeran, targeting wistful, possibly lonesome, singer-songwriters looking for fame, not via The X Factor, but by way of a small home studio, someone who just needs a few ins and outs on their interface (and perhaps a free something or other to go with it and sweeten the deal).

The PreSonus Studio 26 (or 2|6) USB interface is the latest to offer more than you may initially think, although it faces some stiff competition, possibly even from its own older sibling. A couple of months back, we looked at a bundle from PreSonus – the AudioBox 96 Studio – that featured an older AudioBox interface, a pair of headphones and a mic for not a lot more than this newer interface on its own, so you’d hope that PreSonus has its marketing strategy right. Fortunately, I think it has, as this software bundle ups the ante further, as does the interface itself.

Let’s look at the box itself. We get a very sturdy and compact USB 2.0 interface featuring a combo pair of mic/instrument line ins (with +48V phantom power for condenser mics), a pair of line outs, headphones and MIDI connectors. As you’ve probably gathered, it’s USB bus powered and can record up to 24-bit, 192 kHz audio. 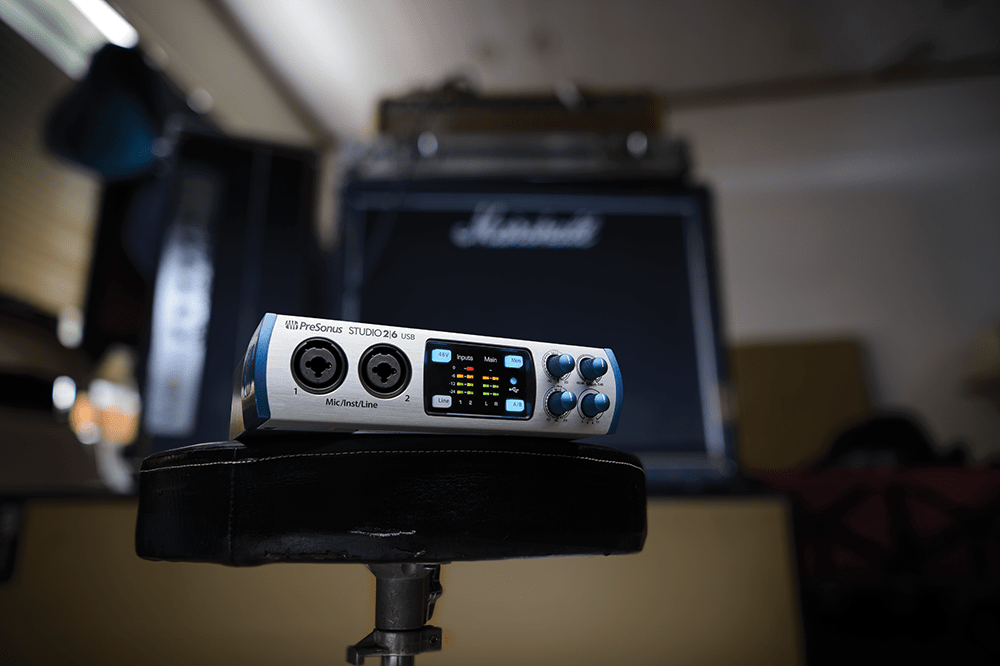 There are two PreSonus XMAX-L solid-state preamps and converters that boast a dynamic range of 114dB. There’s a Cue Mix A/B feature that lets you toggle between mixes and you also get LED metering for both ins and outs. You should also note that there is another interface in this series, the 68 (or 6|8), with added S/PDIF ins and outs. It’s slightly larger and costs another £100, but the software bundle is the same. Talking of which…

You’ll want to register the serial number that comes with the 26 to download the software. The first is the now ubiquitous Studio One Artist DAW. It ships free with most of the company’s hardware and that free label almost does it a disservice, as it is a fully-featured DAW.

You get unlimited MIDI and audio tracks, loads of effects and instruments (26 in total) plus GB of free stuff including samples and loops. It’s also very easy to set up Studio One with the 26 interface. You simply select it as the main in and out at launch (from a drop down menu of available interfaces) and then you can even load a preset project – prepared by PreSonus just for the 26 (there’s one for every piece of PreSonus hardware).

I was up and running with the two in tandem in seconds – very neat. Recording in using this project, you quickly realise that the preamps scream quality. Be careful with levels, mind. The headphone one in particularly runs pretty hot. 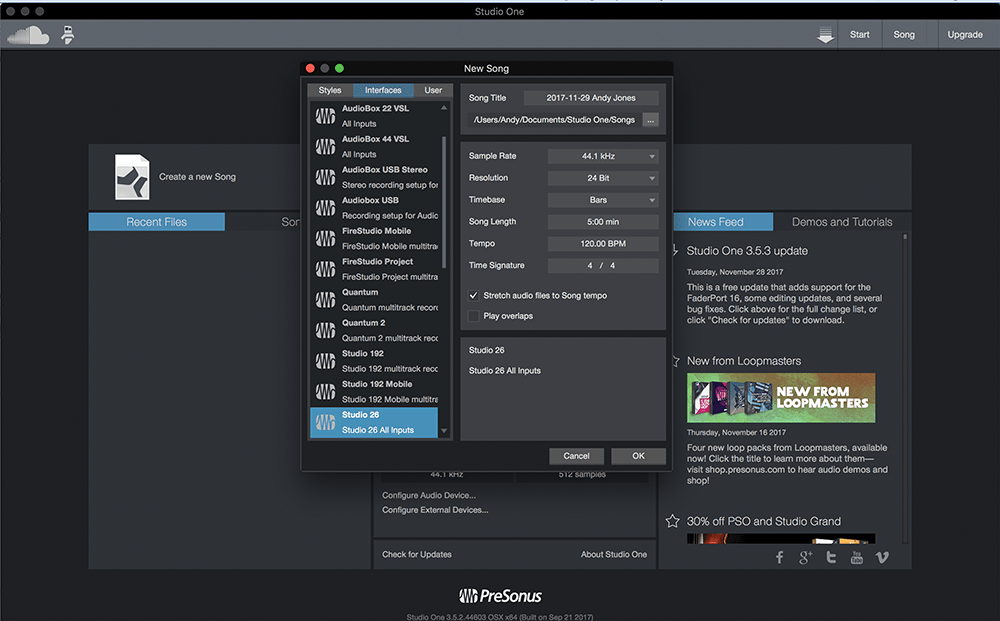 The interface also comes with the Studio Magic plug-in suite. Now this is a bit special. We reviewed Acoustica’s Mixcraft DAW a couple of months back and with that Acoustica had mined a load of instrument plug-ins from several companies.

With Studio Magic, PreSonus has done the same only with effect plug-in companies and some pretty big names at that: you get Eventide and Lexicon reverbs, a Brainworx compressor, an EQ and harmoniser and even a lite version of Analog Lab, Arturia’s “best of” vintage keyboard sounds.

PreSonus describes this package as not being full of “gimmicky one-trick ponies – these are real-deal workhorses that you’ll rely on for countless mixes”, and I have to agree with them here. With some bundles, you get the impression that the plug-ins included are past their sell-by dates.

They might well have cost a fair bit at some point in their history, but are pretty much worthless now. Here, though, you get a Lexicon reverb, two words that scream quality, as do ‘Eventide Harmonizer’. This is proper stuff and it’s free. You will have to register at each manufacturer’s website, but that’s a small price to pay for such quality, right?

The 26 interface is a great, compact and well-built interface for small studios and mobile-recording scenarios. Shove it in a bag, use it with a laptop and you are good to go for a variety of tasks, from getting new song ideas down with a guitar to podcasting or vlogging. Its recording quality is right up there with some of the more expensive options, so while it might be great for beginners, its results are most definitely pro.

Yet it’s the software that sets it apart from similarly-spec’d competitors. PreSonus seems to have cherry-picked some of the best plug-ins from a variety of developers to give you a wide range of very usable workhorse plug-ins that you will use and are a step above ones that come with other DAWs. Throw them up in the supplied Studio One Artist and you have a pro recording system which sets you back a stupidly low amount of cash.

PreSonus does offer a bundle with more hardware but less software that might meet your needs – see below – but as the interface here is more pro (certainly in terms of features and flexibility), it’s really horses for courses. The bottom line is that Studio 26 has an incredible amount of power, loads of features, a high quality build and software you won’t get with other manufacturer’s interfaces. And all for a shade over 150 quid. Bargain.

The AudioBox 96 Studio interface is perhaps not quite as fully featured as the 2|6, but it’s good-enough quality for many YouTubers and singer-songwriters, plus you get Studio One Artist software, a set of phones and a mic bundled in. 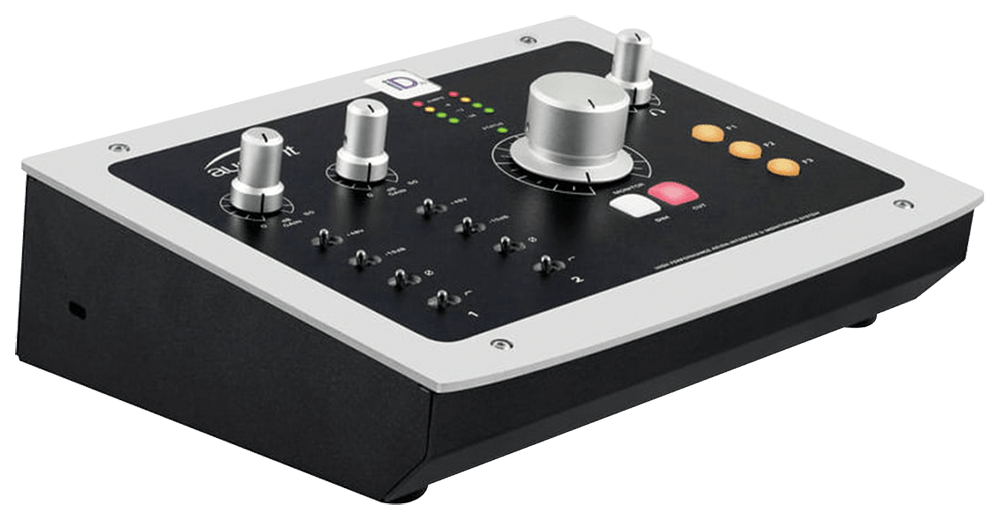 An interface and monitor controller that is all about the pristine converters and excellent-sounding preamps that are identical to the ones found in Audient’s hardware consoles. There’s a useful software bundle included for your money, too!