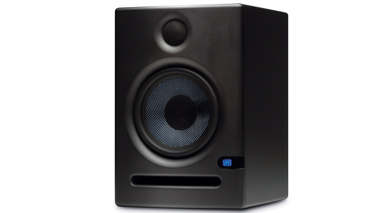 PreSonus has entered the entry-level monitor market with the Eris series – a no-compromise collection that is packed with features and quality components. Huw Price cranks them all up… 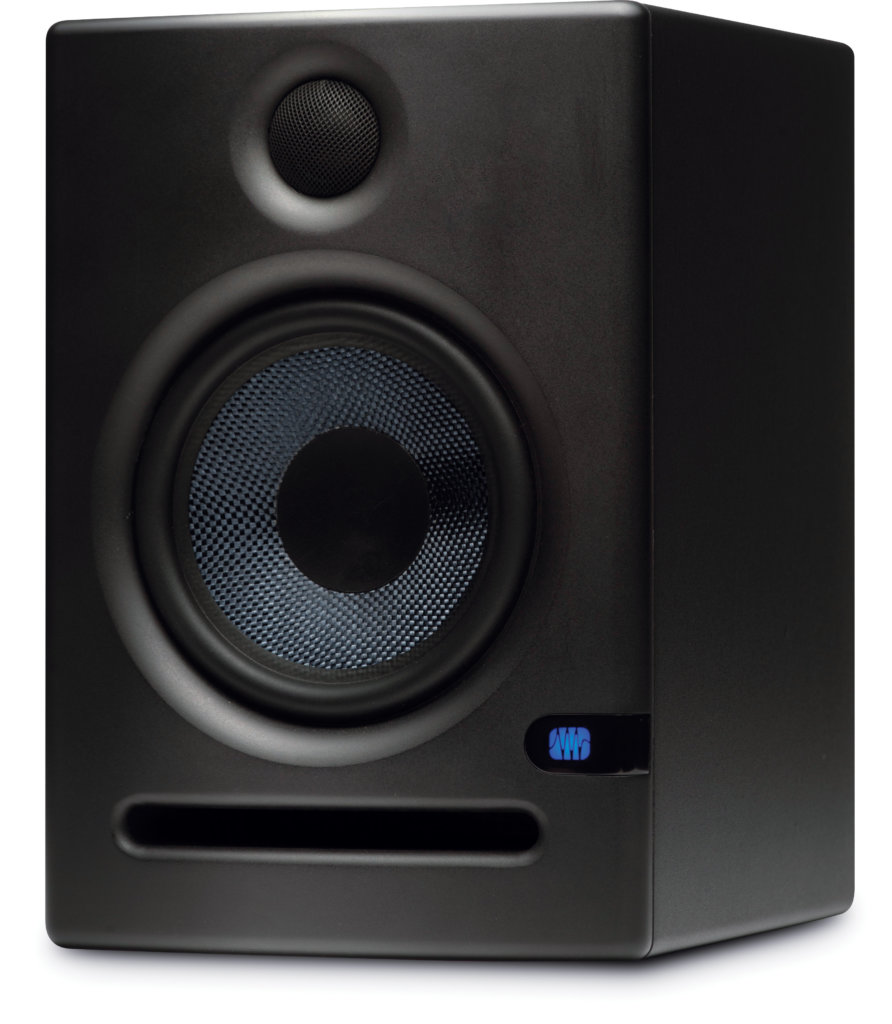 The Eris E4.5 is a crossover product that is ideally suited to computer speaker duties, but can be called into action as a bona fide studio monitor as well. A 4.5in Kevlar low-frequency driver combines with a low-mass 1in silk-dome tweeter with a protective grille, and they’re driven by two 25W Class AB amplifiers that are housed in the left speaker enclosure.

Audio inputs are all on the left speaker too – balanced jack or unbalanced RCA – and the right speaker is connected to the left by a length of traditional speaker cable with base-tinned wire at each end. Because of this the 4.5 is only sold in a pair with all the necessary cables supplied. Both enclosures are rear ported.

Stepping up to the Eris E5 we have a 5.25in Kevlar driver with a 1in silk-dome tweeter powered by 45W and 35W Class AB amplifiers, respectively. Frequency response is rated at 53Hz to 22kHz, and this time the enclosure is front ported.

If bass frequencies and high volume are critical for your needs then check out the Eris E8. It’s like a scaled-up Eris 5 with an 8in Kevlar woofer and a larger 1.25in silk dome tweeter. They are driven by 75W and 65W Class AB power amplifiers, and bass response is extended to down to 35Hz. All three enclosures are made from vinyl-laminated MDF.

Although it’s the baby, the Eris 4 has the same comprehensive feature set as the 5 and 8. The difference is that the volume control and power switch are on the front panel, along with auxiliary input and headphone output sockets. 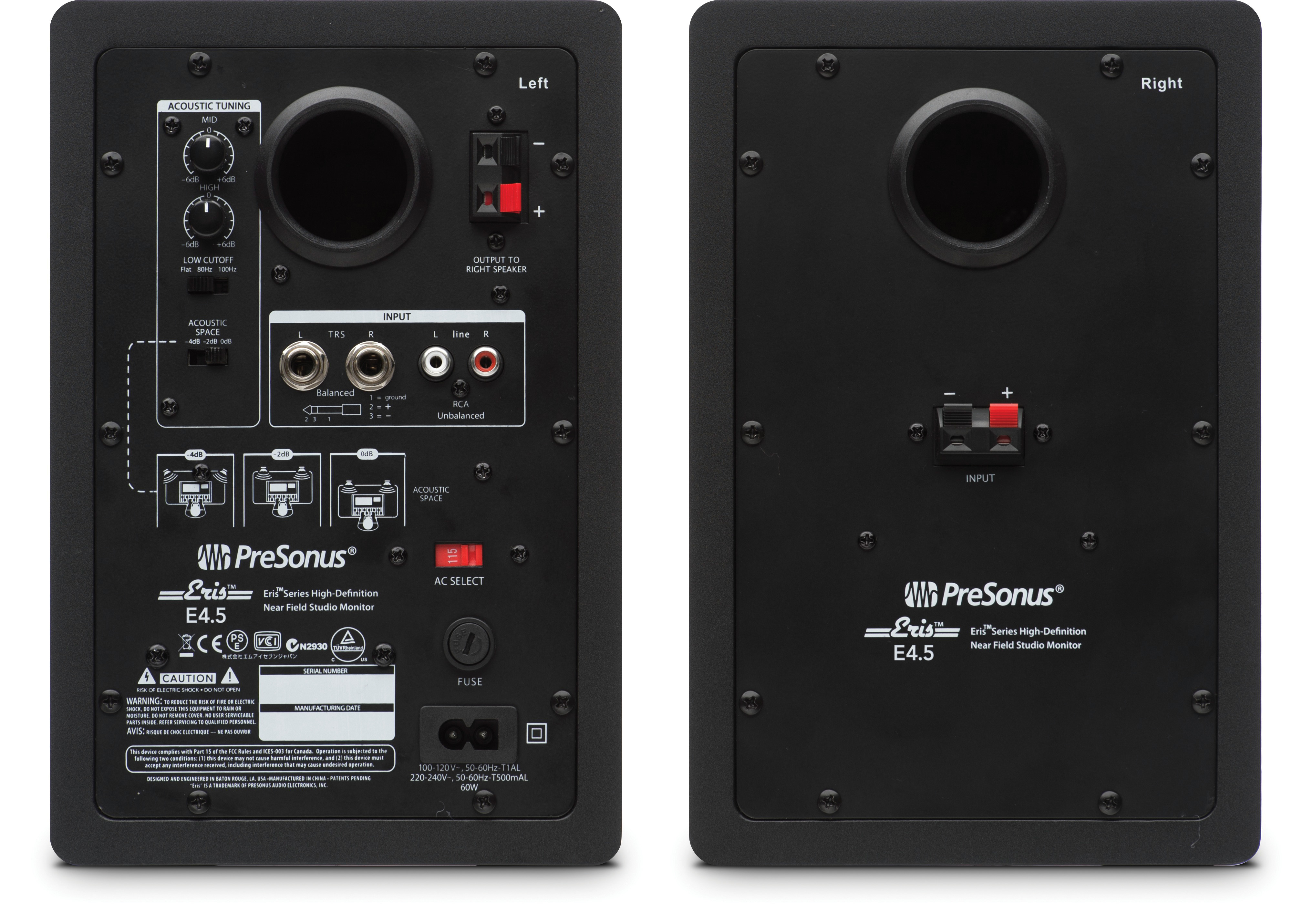 The Acoustic Tuning section includes High and Mid frequency controls plus a Low Cutoff switch. The High control provides boost or cut at all frequencies above 4.5kHz with a range of ±6dB. The Mid control does the same job at frequencies centred on 1kHz, extending around an octave above and below that frequency. The Low Cutoff switch rolls off low frequencies below two selectable frequencies, 80Hz or 100Hz, at a slope of -12dB/octave.

Perhaps the most interesting feature is the three-position Acoustic Space switch. This activates a second-order, low-shelving filter that cuts the level of all frequencies below 800Hz by -2dB or -4dB to compensate for boundary-induced bass boost that may occur when monitors are placed next to a wall, in a corner, or both. And of course there’s a 0dB setting too.

All three Eris monitors feature RF shielding and over-temperature protection, current-output limiting to prevent damage in the event of a speaker terminal short circuit and filtering of very low-frequency vibrations that could interfere with the woofer. The amplifiers also have ‘soft startup’ to prevent pops on power up.

The Eris 5s produce a bold and up-front sound with clear treble and solid bass. With flat settings in our test room the bass thump was ever so slightly too much, so we tried out the Acoustic Space feature. With only a 2dB reduction the bass tightened noticeably, but the more surprising thing was the way the soundstage seemed to clear up and gain depth.

Capping things off with a bit of treble roll off and a very tiny midrange boost, the Eris 5s were almost able to match the tone of the Focal CMS 40s we generally use for reference. The Eris 5s weren’t quite as refined and the imaging wasn’t as three-dimensional, but they certainly came close. Lastly we followed PreSonus’ instructions for emulating a cheap radio tone. Frankly we weren’t convinced because the Eris 5s still sounded pretty good – and that’s no bad thing.

Predictably enough the Eris 8s present a noticeably larger and more spacious acoustic image and filled out the room effortlessly. It was a similar story with the -2dB Acoustic Space setting, and we actually ended up running them at -4dB, but the 8s sounded smoother and sweeter in the upper frequencies than the 5s.

The 8s can certainly pump some bass into a room but, as with so many large near-fields, the trade off is a degree of sluggishness. Consequently dubby rhythmic basslines tended to sound a bit blurry in our room, but things may be better in environments that have more bass trapping. Even so, they’re vibey and fun but we’d prefer to use them in conjunction with some other monitors when making critical mixing or mastering decisions. 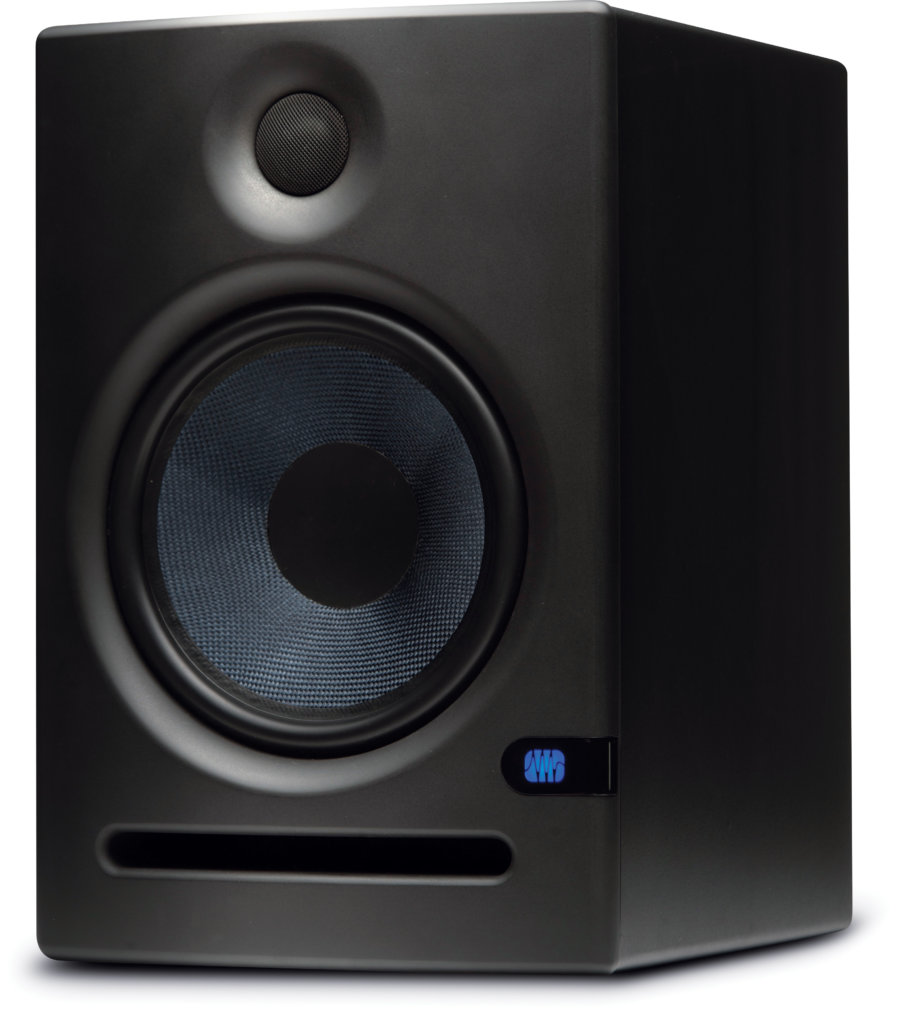 In some ways we have left the best to last. We hadn’t expected that much from the Eris 4.5s because they most closely resemble computer speakers and are priced accordingly. Given those caveats the sound quality was absolutely remarkable. Although they have all the tone-shaping controls of their bigger brothers we felt less inclined to tweak them because the 4.5s sounded so good straight out of the box.

Of all three Eris monitors the 4.5s probably had the finest bass definition, but it is possible to detect some roll off at the lowest frequencies. The imaging was also remarkably crisp, and although the obvious application may be use with computers we’d have no compunctions about integrating them into our studio monitor setup.

These are not expensive monitors but they punch way above their price point. They’re perfectly suited to rock, pop and electronica, but critical acoustic recordings, particularly strings, do reveal their limitations when compared to high-end monitors. This standard of real-world frequency adjustment controls is unusual for entry-level speakers and the same can be said of the looks, build quality and sound.
The Eris range has something to suit many set-ups at a great price. 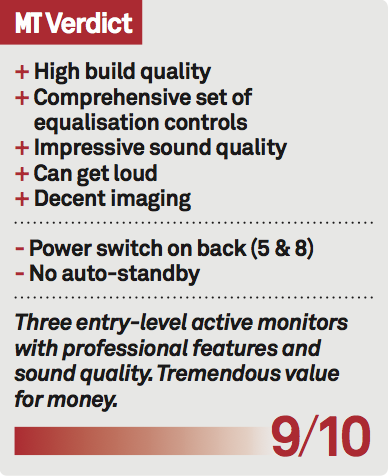