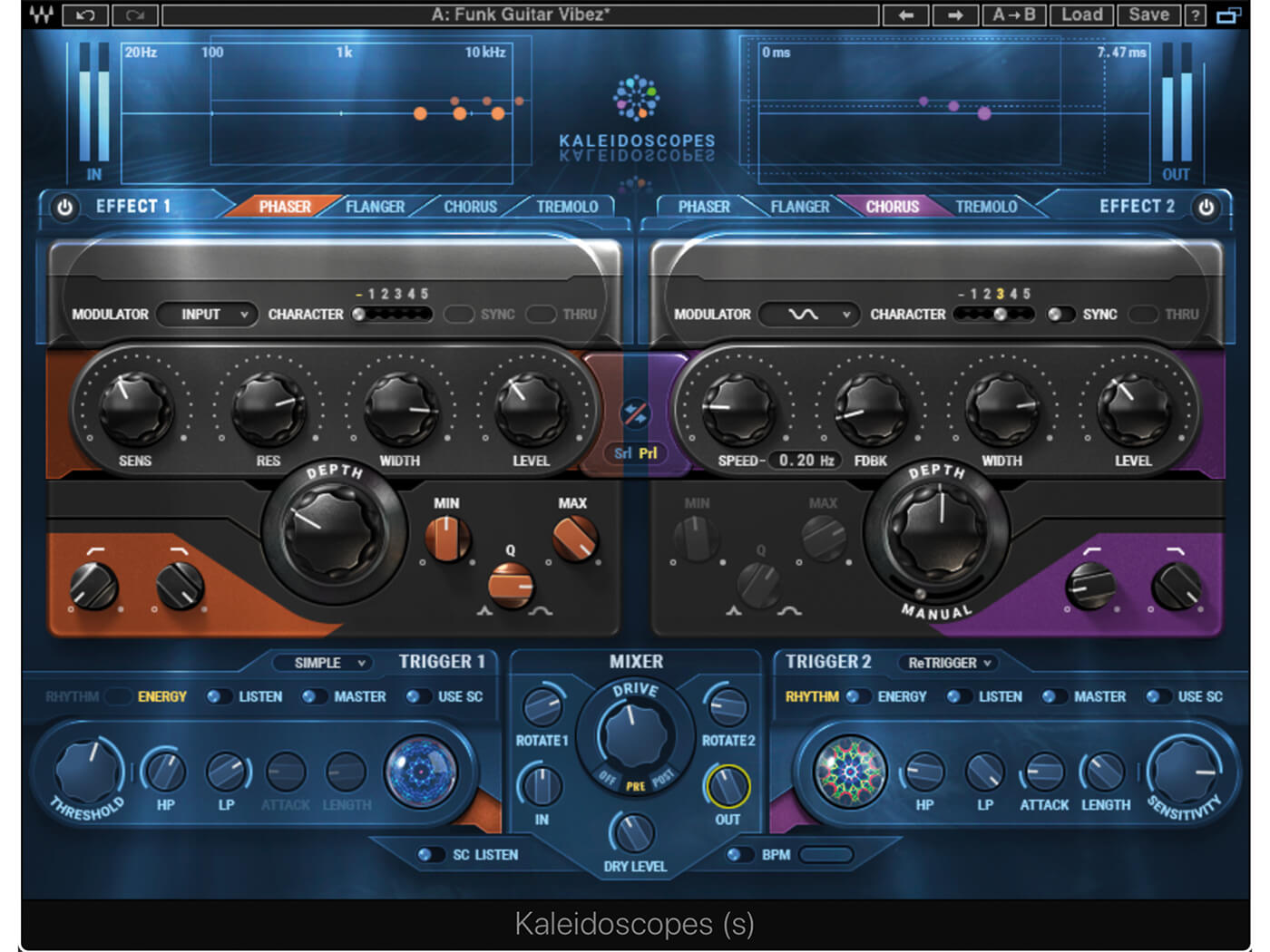 Some effects refuse to go out of fashion. Classic reverbs, compressors and EQs have found a way to write themselves into record production folklore and never lose their lustre. For those of us who work ‘in the box’, this means we’ve never had it so good; the competition between rival plug-in developers has ensured that the emulations of these classic devices has achieved unprecedented levels of subtlety and detail. In turn, this means that it’s affordable for us to bring the flavour of vintage, rare and prohibitively expensive hardware into our software studios. But whilst certain effects might retain ‘classic’ status, the ways in which we want to use them will always be driven by adventure and experimentation.

Meaning that willful ‘mis-use’ remains just as appealing to producers today as it has to the pioneers of record production through the past few decades. Fuelled by that mindset, Waves has brought Kaleidoscopes to the table. It’s a dual-engine Modulation effects plug-in which models the sound and character of some of the most coveted processing hardware ever developed. But the way in which it seeks to implement those effects has as much of its tripped-out gaze on the future as the past. 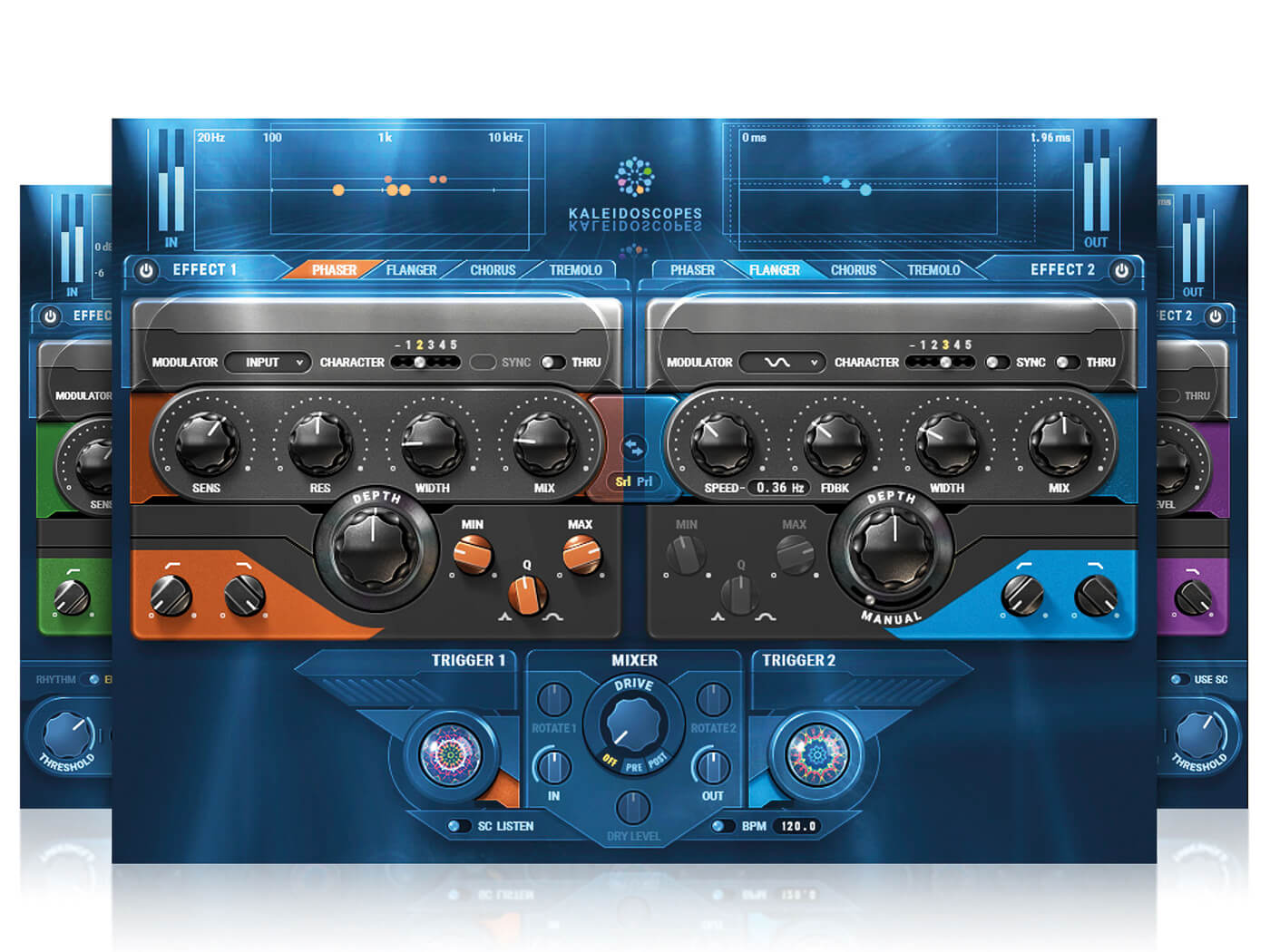 The official web page for Kaleidoscopes makes it clear that some of the most coveted audio hardware in these effects categories has been meticulously modeled for this plug-in. The units in question are: DeArmond’s 601 Tremolo Control (from 1941), Fender’s Tremolux (1955) and Vibrolux (1963), the Eventide Instant Phaser PS101 (1972), MXR’s Phase 90 (1974) Phaser Pedal, the Eventide Instant Flanger (1976), Boss’ classic CE-1 Chorus Ensemble and MXR’s Phase 100 (1977).

The twin effects engines in Kaleidoscopes appear side by side, with the option to select one of the four effects – Phaser, Flanger, Chorus or Tremolo – at the top of the parameter sets for each engine. The effects are colour-coded, with Phaser in orange, Tremolo in blue, Chorus in purple and Tremolo in green, making it clear whether you’re running two matched effects, or using different ones on each side. Each Engine also features its own power button in the top left and right-hand corners, making it easy to hear the result that just one of your effects is having as you contour a treatment to your source sound. Having picked an effect, the parameters below then let you start to play with its capabilities. Phaser, for instance, provides four rotary dials which let you choose the Speed, Resonance amount, stereo Width and Mix level.

Let’s start with this last dial first. Kaleidoscopes can run in Series and Parallel processing modes; in Series mode, Engine 1’s output is sent to Engine 2, so the first effected signal is the start point for the second engine. In Parallel Mode, the input signal is split and sent equally to both Engines 1 and 2, which can both have their own effect, but with each of these operating independently. In Series mode, the Mix dial determines the amount of level sent from Engine 1 to Engine 2. In Parallel mode, it becomes a Level dial for the effected volume of each engine. So far, so classic, in that each modelled effects type behaves as you might expect. However, Kaleidoscopes is determined to inject movement and ‘response’ into your productions and this begins just below the buttons for each effect, where you can choose a Modulator type and shape to get your treatments moving. 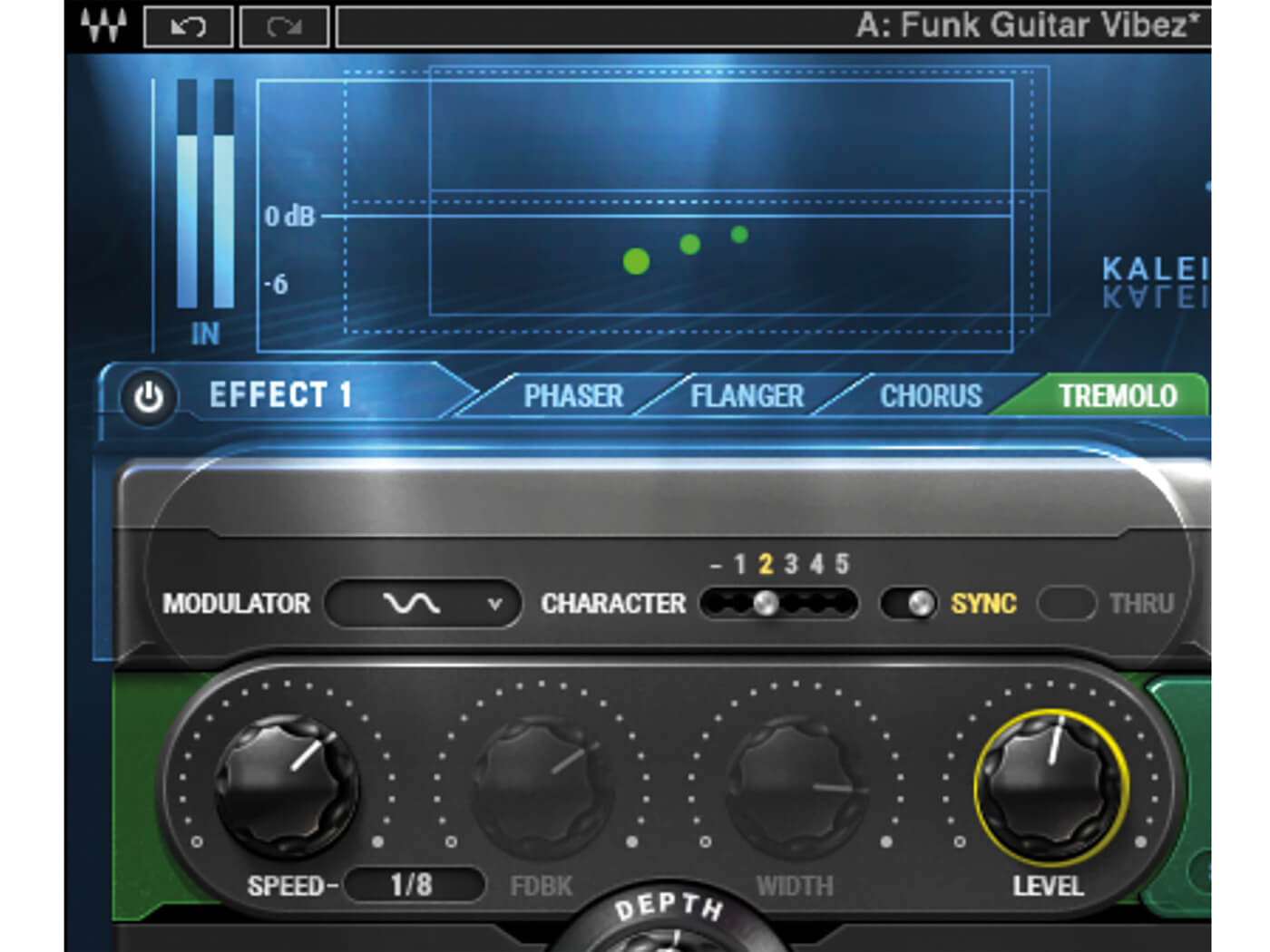 Moving on to the Modulation options next and Sine, Triangle, Absolute Sine and Random are all LFO waveforms which provide a ‘shape’ which can then be assigned to your chosen Effect type. These can either run in free time or be sync’d to tempo, so if you want a Phaser effect which clocks its movement to a bar of your track, no problem. However, it’s also possible to select a side-chain input source or indeed the target source sound as a Modulation input source itself, leading to a range of possible treatments.

When selecting Input, for instance, the Speed dial changes to become Sensitivity, effectively becoming a gain control for the input’s level as a Modulation trigger. It’s also possible to pare back or expand the behaviour of a particular effect using the Depth control which, as its name suggests, broadens the feel of a chosen effect mode.

Each effect type also features High and Low Pass filters whilst the Phaser option provides the opportunity to choose the top and bottom frequency points within which you want the Phaser effect to be capped. Setting these at their most extreme settings means a sound will phase across the entire frequency spectrum but it can be powerful to limit movement around the characteristics and active frequency areas of the source sound.

Just as fun and creative is the option to use Triggers as a means to generate Kaleidoscope effects. These are made available in the extended view (via a button in the top right-hand corner) and offer the opportunity to determine when effects will start. You can choose ‘Rhythm’ or ‘Energy’ as a trigger method, meaning that either a repeating pattern or a sudden burst of volume will turn Kaleidoscope’s effects modules on, with a Sensitivity dial determining the volume threshold point at which this will happen.

You can tailor trigger activity around a certain set of frequencies too, using High and Low-Pass filters and even set Attack and Length Times to determine how long the effect will remain active. In Simple mode, once a Trigger has been activated, Kaleidoscopes remains on, whilst in ReTrigger Mode, the effect will switch off once the signal triggering it stops. In other words, you could use just the snare drum of a beat loop to trigger Kaleidoscope to switch on but have the effect drop out when the snare drum stops, should you so choose.

Finally, there’s a Mixer section in the middle at the bottom, where you can dial in the amount of Dry level you want alongside the effected channel(s), add Pre- and Post- effects Saturation and employ the Rotate dials. These let you set a stereo width position for both effects engines, meaning that, for example, Phasing on the left can be accompanied by Flanging on the right.

All of these options underline the fact that Kaleidoscope offers a great deal. It’s fun, intuitive and whilst there’s a little bit of a learning curve, that’s entirely to be expected for a plug-in which offers this level of flexibility and route-ability. Remember, Kaleidoscopes can either run as two broadly independent processors, or one amalgamated one, where the level of cross-feed between the modules has the potential to be rich and detailed. As ever, the only question to ask is: is this a plug-in which can benefit my mixes? And the answer is a resounding yes, both in direct ways pertaining to each individual effect type, and in new, genuinely inspiring and unexpected ways when you start clocking one effect to another. There’s nothing quite like Kaleidoscopes out there; dazzling work Waves. 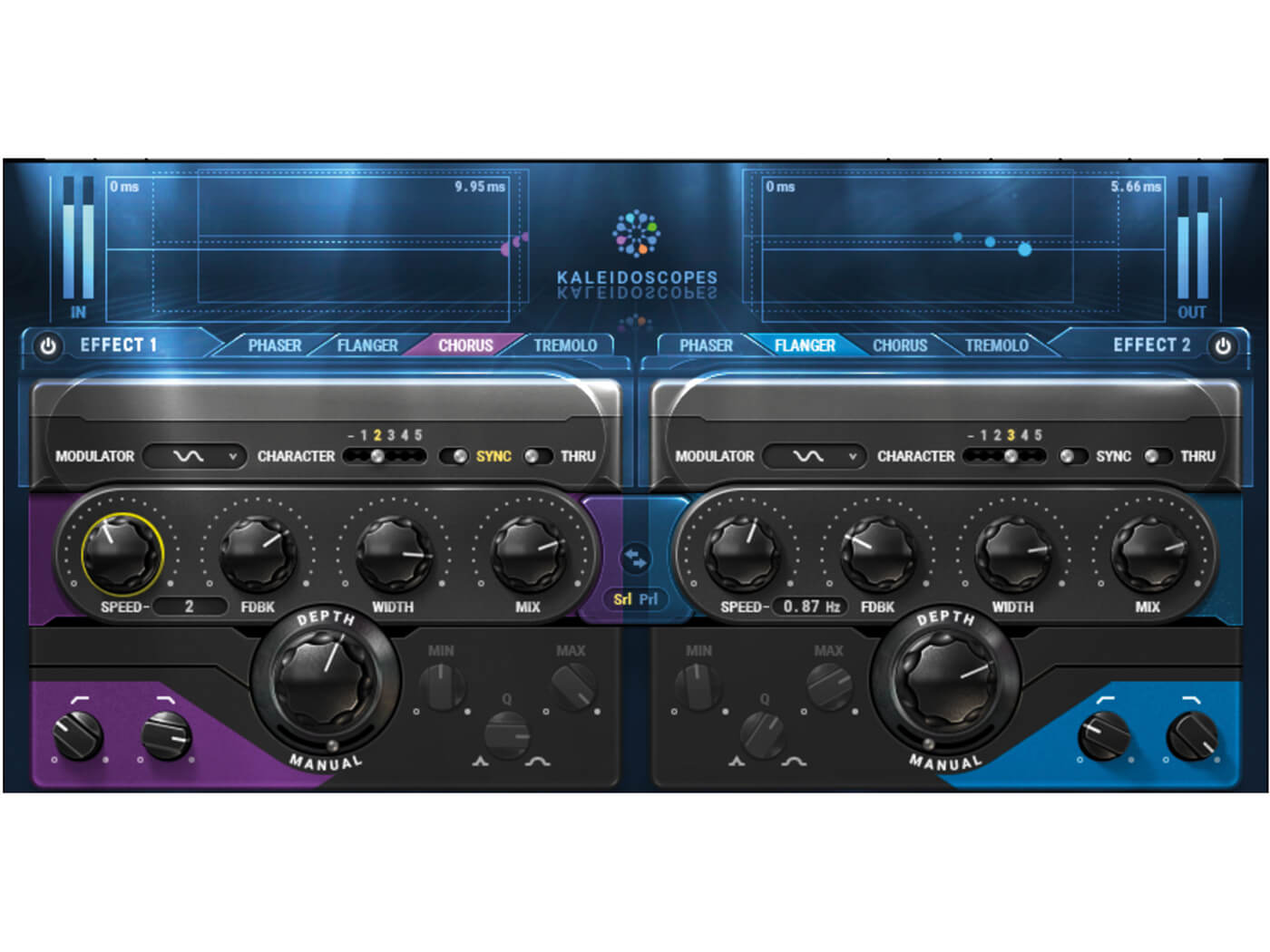 Your DAW probably contains individual versions of phaser, flanger, chorus and tremolo effects and, even if those aren’t modelled on some of the most coveted hardware in each category, you might find they’re doing what you need. But Kaleidoscopes isn’t only offering you a richer sonic version of these effects. It’s also introducing an inter-connectedness between two effects engines, a range of ways to clock movement to tempo, offering volume and frequency-determined Triggerable effects and it’s doing all of this at a price which won’t come close to breaking the bank.

A pared-down collection of 14 Soundtoys plug-ins to be configured in ways of your choosing. Includes MicroShift, PhaseMistress and Tremolator alongside some other Soundtoys classics.

No Tremolo or Phasing so by no means a direct competitor. But if Flanging and Chorus effects are what you seek, these ooze quality.