The latest incarnation of the popular hosting package from VSL includes some incredibly useful updates, along with a healthy dose of sample content. 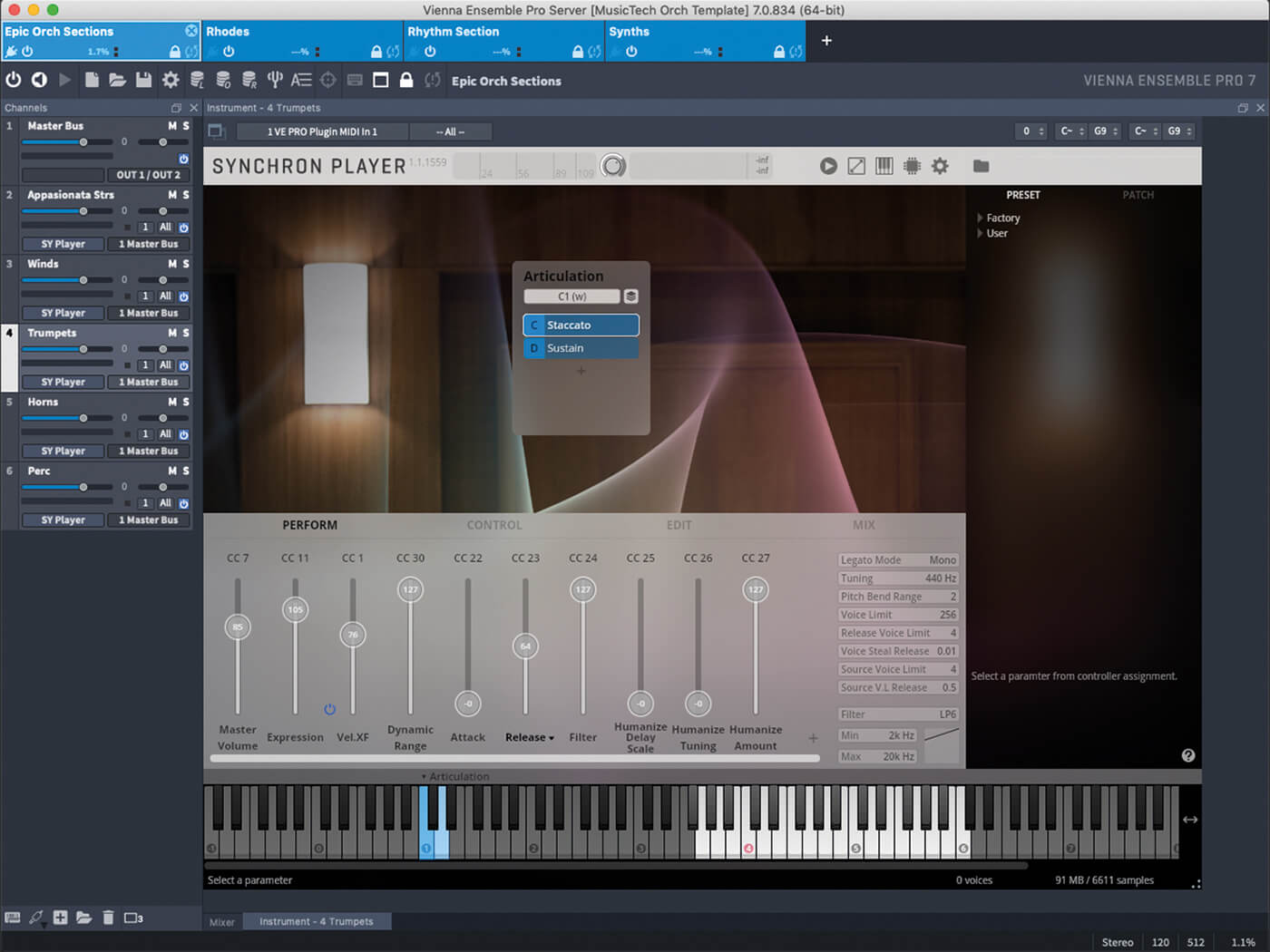 Vienna Symphonic Library – affectionately known by the acronym VSL – deserves a great deal of kudos for numerous innovations through the years. The Symphonic Cube, released back in 2002, was one of the first packages to truly acknowledge the coming of age of orchestral samples, with a sample count that ran into the millions. It was huge and for the most part, actually lived up to the hype of offering an orchestra in a box, ripe for installation on your computer.

As many of us can recall, it was difficult to run that many samples on a single computer in 2002. I tried somewhat successfully to use EXS24 in Logic for this purpose, which quickly became the poor cousin to the Hollywood industry standard of the GigaSampler package, developed by Tascam. It was not uncommon to see professionals with up to eight PCs (it was a PC-only package!) being deployed to host those millions of samples, but in 2008, the GigaSampler package was discontinued, and this is where Vienna Ensemble stepped firmly into the breach.

Your host for this evening

In essence, Vienna Ensemble Pro 7 is a host package for plug-ins, but it can be considered a beast with many heads. Firstly, it can be used alongside a DAW on the same machine. Many might question why there is a need to do this and this really depends on how you use your system and how often you might switch songs or projects. No surprise, then, that media composers enjoy the ability to load up a sizeable template, which might include everything from a symphony orchestra to a bank of soft synths and more, while their composition-based DAW might talk to it. This means that the samples only have to load once, speeding up access to each cue as the loading cycle is significantly shortened as a result. 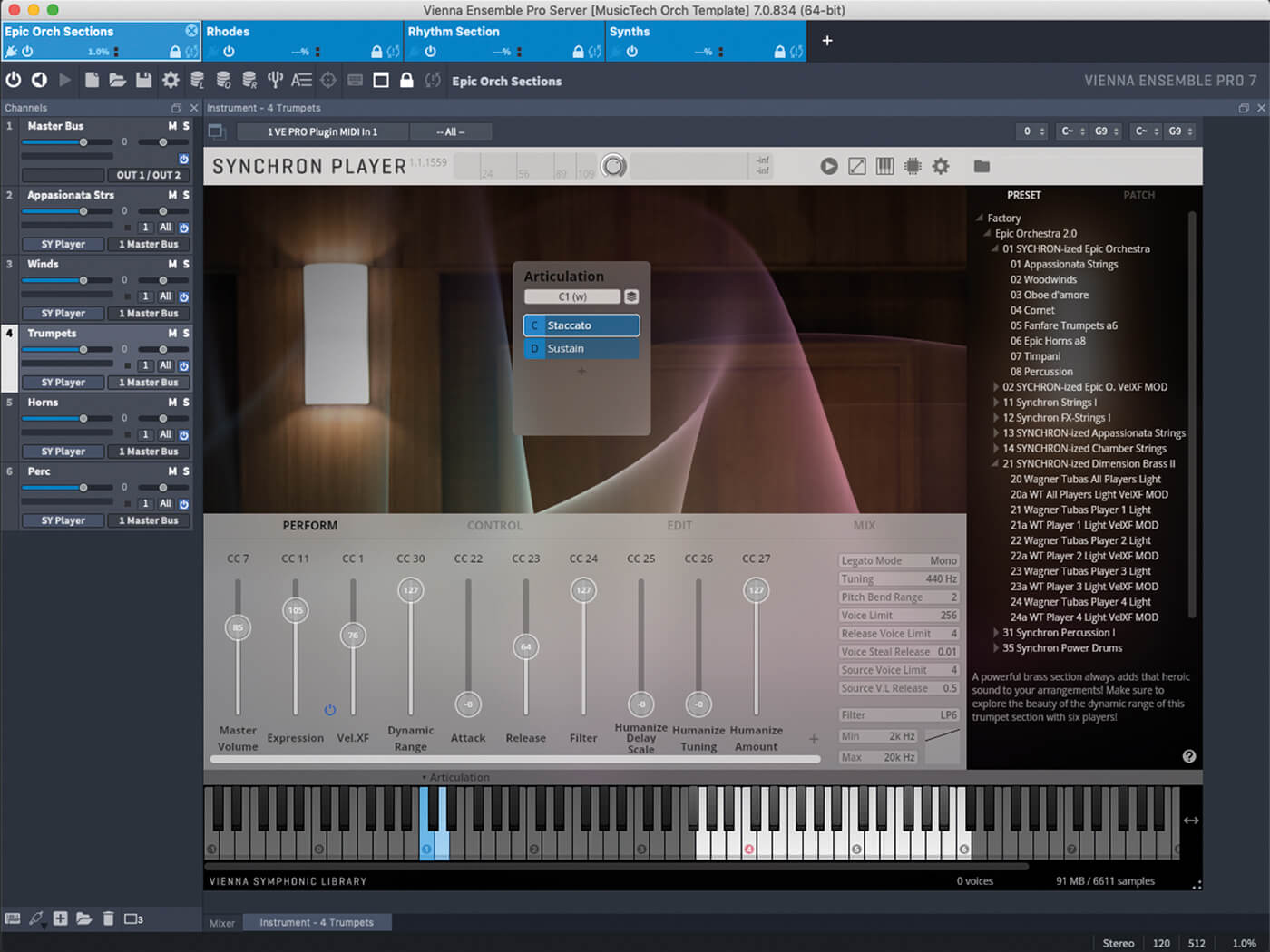 Taking this logical concept further, VEP7 can be hosted on a second computer, taking the strain of the plug-ins away from the DAW-based computer, and again offering considerable benefits for workflow.

This is only part of the story, though; if you have a desire for some fairly decent orchestral sounds on a budget, VSL has kindly bundled in the Epic Orchestra 2.0 sample suite, which will give you some pretty good and very workable orchestral sounds, including a stripped-down Appassionata Strings, and some very decent woodwind, brass and percussion, too.

Regrettably, it’s important to point out that VEP7 will not be able to exploit DAW-specific plug-ins, so if you have a favourite from within the inner sanctum of your chosen package, VEP7 will not see it, but any included AU or VST plug-ins, which may install with your DAW, should be seen.

It’s at this point I have to confess I’m one of those composers who has a template or five, which exist in something of a state of flux, as things get added, replaced or ejected on a regular basis. I also enjoy the ability of starting afresh, without pre-constructed templates, so the flexibility of VEP7 is a truly appealing prospect.

Loading up VEP7 for the first time and the immediate call of duty is to start building up a construct. Helpfully, this can be done in layers, so it’s perfectly possible to have multiple libraries running in harmony. VSL’s included samples operate from within their own Synchron Player plug-in, while many other sample-based packages rely heavily on Native Instruments’ Kontakt. Building a page for each within VEP7 is not terribly difficult, but it can be considered a little time consuming. This takes nothing away from VEP7; building any template is a time-consuming business and, as hinted earlier, it’s quite likely you’ll go back and tweak it as you desire further requirements or inclusions.

While I chose to run VEP7 on a solitary MacBook pro, it is simply a case of going to my DAW (in this case Logic Pro) and plugging in the VEP7 plug-in, to get Logic to talk to my newly constructed template, and once there, a little bit of noodling with MIDI-channel settings is required, then all was well. You would be forgiven for thinking that there might be greater lag in proceedings, but there’s not so much – playback is swift, reliable and responsive, while all MIDI CCs play very nicely, too. 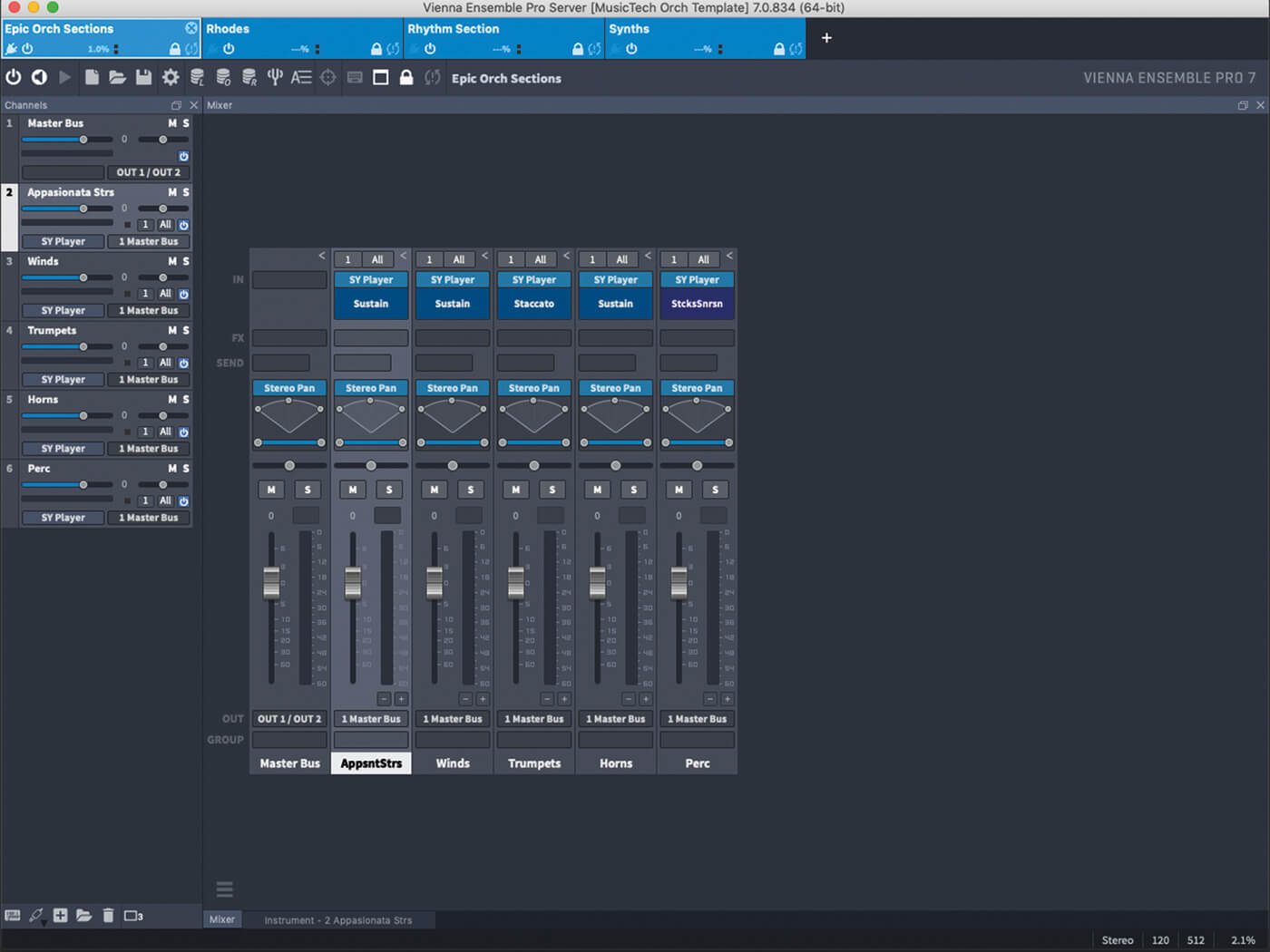 The option of buying a second computer to take the strain away from the main DAW-centric machine is very tempting, with connection being made only via Ethernet, without the requirement for additional interfaces or DAW licences. In this scenario, a bump up in RAM would doubtless be worthwhile, to cope with the sample usage demand of a large template on the VEP7 host machine.

Regardless, there are a considerable number of tricks up the VE7’s sleeve, with a large number of useful inclusions and updates. Alongside new simplistic duties, such as the ability to copy and paste channel strips, it’s now possible to load templates without booting samples into RAM immediately, while also offering the option to offload samples, to reclaim RAM if you’re not using a whole template. This means that the user can create a vast template, with the ability to load or disable at will, while in play.

There have also been significant enhancements within the area of DAW-based automation, with a far better user experience which now offers naming of automation parameters, rather than just numbers, as seen in the previous version.

This is a sizeable upgrade on the previous Vienna Ensemble package, which offers a better user experience in many areas, covering basics such as colouring of channels, through to considerable streamlining of the CPU loading. Once it’s set up, it is very effective in use, and could easily become a highly prized workhorse for anyone who enjoys working with a larger template or canvas. Whether you require a second computer (or more) is dependent on how big you want to go, but there will be a degree of setup, which is stating the inevitable.

The included Epic Orchestra is a really great addition to this compendium, being firmly toward the top of the pack of the current crop of entry-level orchestral packages. It’s almost worth the purchase price for this alone, while the Synchron player is beautifully constructed and reliable. VEP7’s compatibility extends to just about all plug-ins currently available, and as such, this could be a truly indispensable piece of software, at a very fair price point.

There are really two main reasons for considering VEP7; the first is purely to do with workflow. If you find yourself loading multiple projects in a working day, there is no doubt that VEP7 could save plenty of time, without the drumming of fingers as the samples load in succession. The second reason is more to do with RAM and CPU loading; some software does not allow for the offloading of samples from RAM, meaning that large DAW-based templates can take up huge chunks of memory, or even exceed a host machine’s capability. Taking the RAM and CPU strain away from a host DAW could make the whole user experience far less painful, especially on larger songs or cues, whether you choose to employ a second machine or not. Either way, VEP7 is very competitively priced, and with the included Epic Orchestra 2.0 suite is excellent value for money. 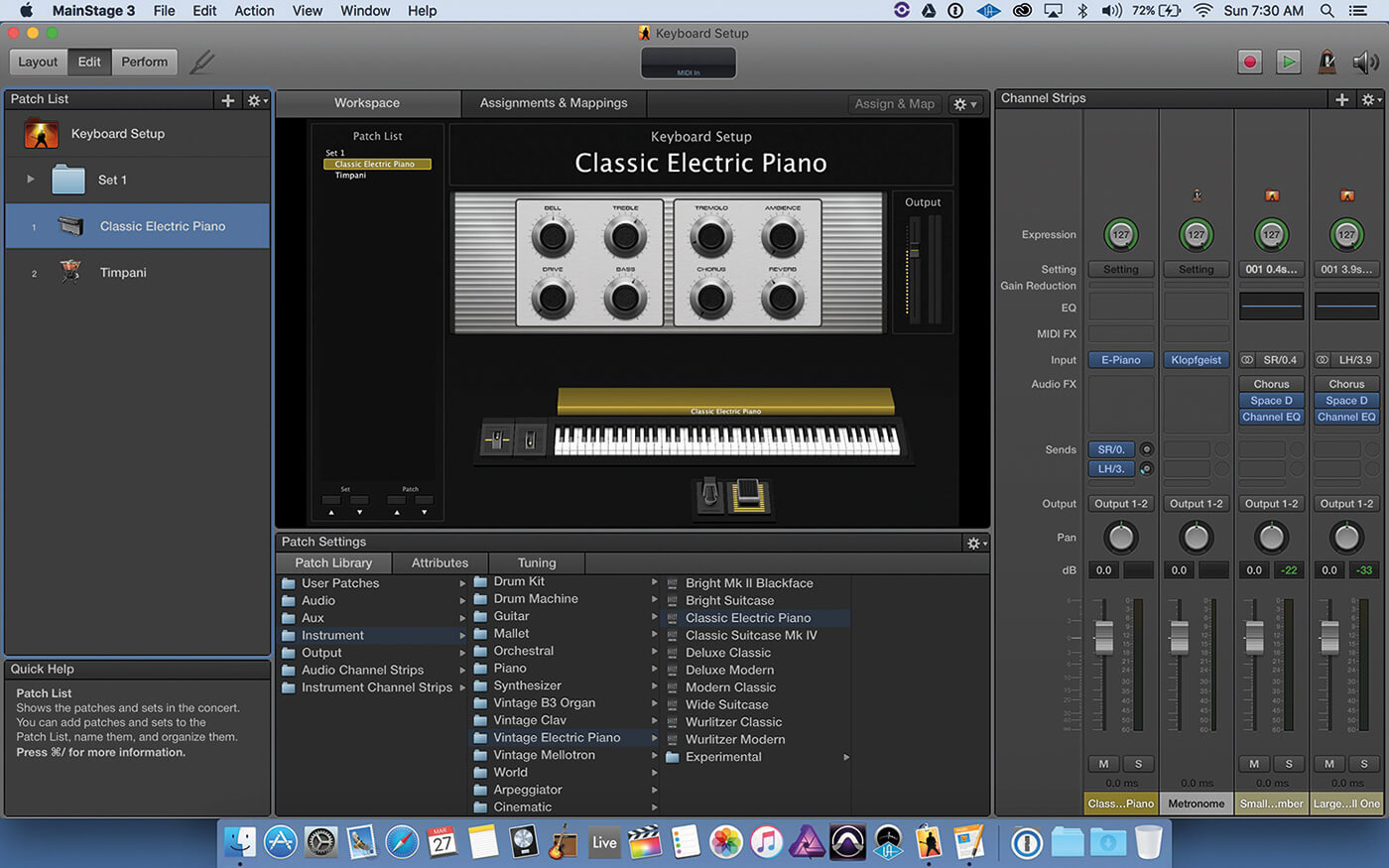 As the name suggests, MainStage 3 is aimed squarely at live usage, allowing the import and use of Apple-based and third-party instrument and effects plug-ins. Integration with hardware controllers is extensive, although it is only available for macOS.

Another host package, extensively designed to simply allow the loading of VST plug-ins for playback on Windows-based machines. Being free, it offers plenty for nothing, but it is aimed at simple usage and deployment.