A dedicated plug-in tool takes the click-work out of crossfading and adds a host of effects to spice up your transitions. 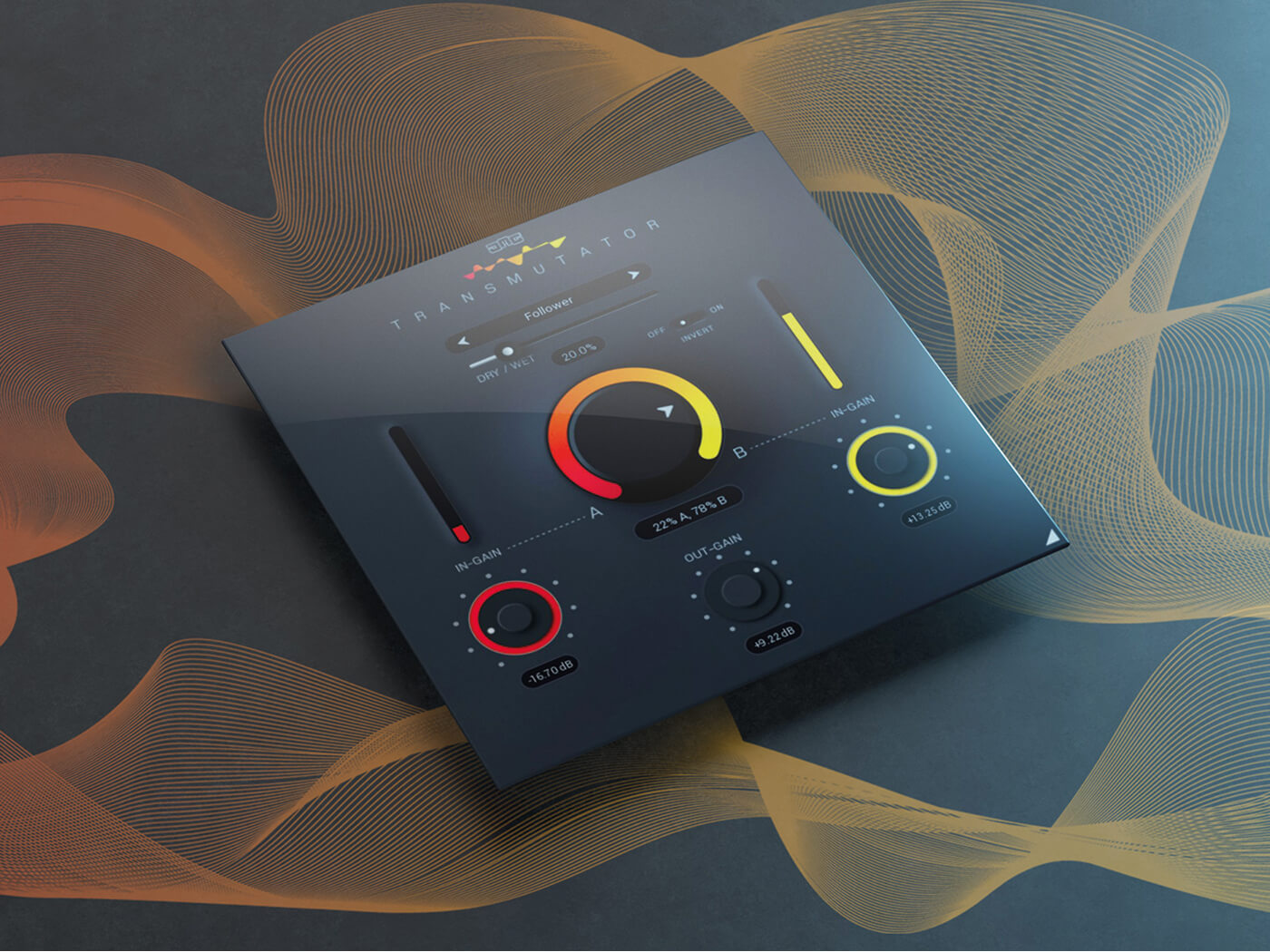 Away from the world of classic outboard gear emulations there is a whole host of innovative tools for the innumerable tasks that face producers, artists, mixers, sound designers and DJs. Transmutator has been developed by JMG Sound, under the United Plugins umbrella, to provide a crossfade and transition tool. Aside from the basic level crossfading, Transmutator provides sixteen blend modes that use the two inputs to affect – and effect – one another across the crossfade.

This plug-in utilises the sidechain function found in many DAWs. Please note that Reason and GarageBand are not compatible as they lack sidechaining functionality. Transmutator consists of two channels, A and B, with the former carrying the signal of its host channel and the latter carrying the sidechain input. The central rotary crossfade control is crowned by a colour strip that runs from red through orange to yellow, illustrating the blend from channel A to B. The mix percentages are displayed below the control and can be clicked to enter the value(s) manually, as can all other parameters. Flanking the crossfader are the two channel gains (±24dB) and level meters, which are colour coded red/yellow. This is not complex stuff, but clarity and bold colours are essential for DJ or live performance use. An overall output gain, also ±24dB, sits directly below the crossfade knob.

So far, so simple. Above the crossfade are the effect controls, starting with a horizontal dry/wet fader and numerical display to balance the straight crossfade signal and the effected version. Above the fader is a drop down menu for the sixteen blend modes, aka the transition effects. An invert switch toggles between two behaviours for each mode. Transmutator can operate as a vanilla crossfader, a function not to be overlooked as it expands the use of a DAW’s sidechain routing.

Thoughtful plug-in placement can open up possibilities that usually necessitate extra routing and automation. Dropping the plugin on group or mix busses is the most obvious use, but sliding it into an instrument channel amidst other effects and processes can produce creative blends and cross-modulations that would require a good deal of copy/pasting, bus creation and channel rerouting. As most sidechain routing options allow multiple inputs, fairly complex crossfading/blending setups can be realised with this basic function. 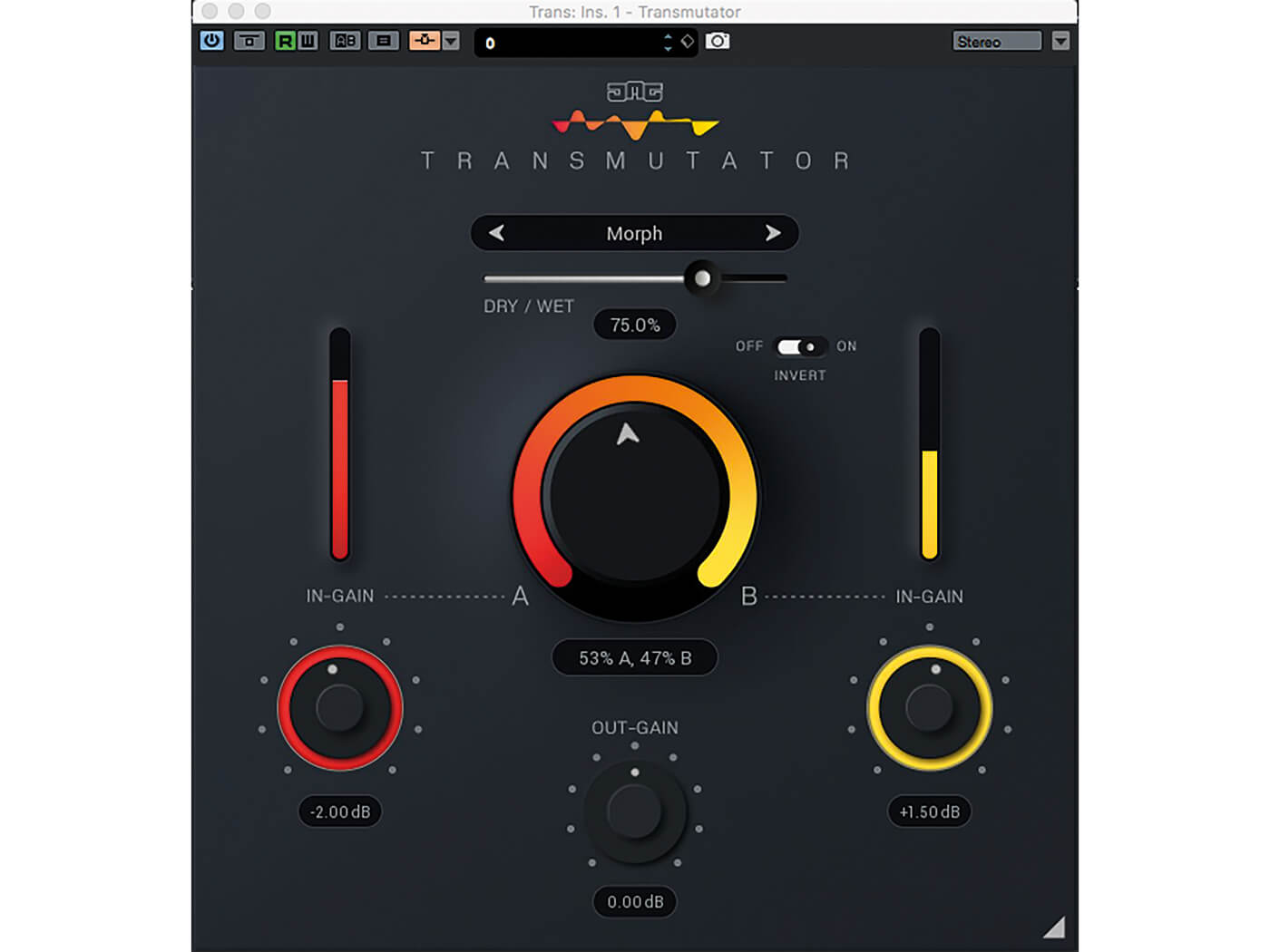 The effect portion of Transmutator, the sixteen blend modes, cover seven categories: filtering, panning, spectral processing, dynamic processing, reverb, pitch shifting and distortion. The bulk fall into the spectral processing with Spectrum, Morph, Liquid, Multi, Diffuser, and Blur. These modes sound and behave differently from each other whilst deriving from a similar algorithmic root of splitting the sources into multiple frequency bands. These bands are processed and blended to a greater/lesser degree as the crossfader rotates.

The results vary from subtle, almost notch filter style alterations (Spectrum, Liquid and Multi) to ringing comb filter blends (Blur). The Diffuser uses ‘spectral freezing and blurring’ conjuring up an Eventide flavour, which is no bad thing. These are great transition effects but the standout is Morph, an elegant vocoder style mode that deserves time spent running various sounds through on a static crossfade mix  between 60:40 and 40:60. The intention is, of course, to roll the crossfader for shifting between tracks, instruments or other mix elements, and in this regard the spectral blends cover a healthy range of permutations. Vocals and pads or sustained leads produce some of the best results from this group of modes. Rich, dense harmonics work very well, and the more distinct the inputs the more colourful the subsequent blend.

The invert switch flips the behaviours for the 0%-50% and 50%-100% crossfader ranges, i.e. the A dominant and B dominant ranges respectively. With many of the spectral modes this means that odd or even numbered frequency band splits are blended on opposite sides of the crossfader and this is flipped by the invert switch resulting in very different tonal outcomes. Long crossfades make the most of the spectral modes, producing sonic transformations that would take far more work than the single 0% to 100% (or A to B) automation track required here. 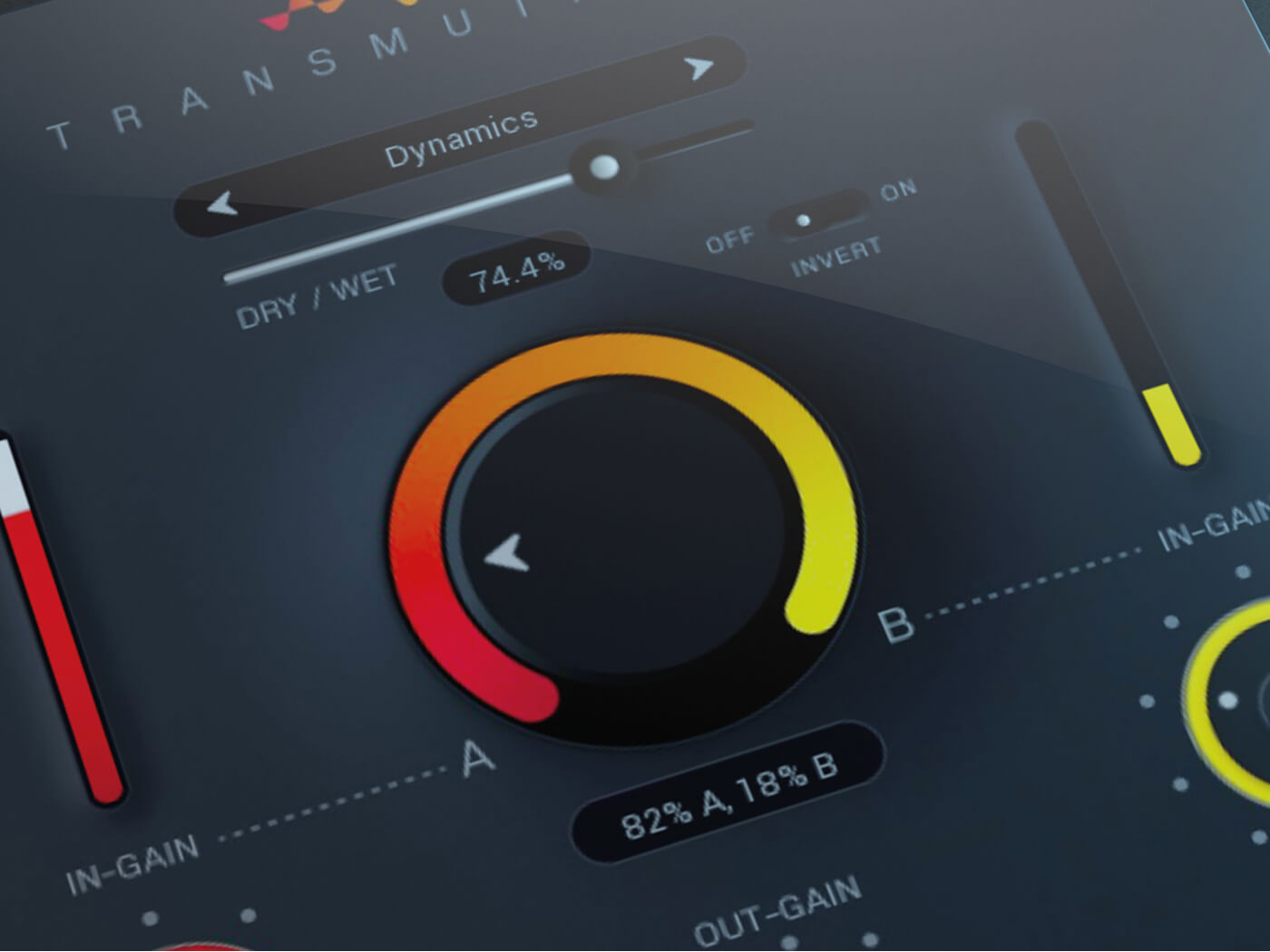 The Filter mode applies a highpass filter to A and lowpass to B, or vice versa when inverted. There’s nothing fancy here, just a good old fashioned filter crossfade that would require three hands in the analogue realm. The reverberant world is represented by the Wash mode which sends the A channel into a splashy verb while B emerges from it. In this case the invert switch shortens the reverb, better suiting percussive sources. These sources, from drums to arpeggiated bass, get to imprint themselves on their channel B partners (and vice versa) with the Transients, Dynamics and Follower modes. Transients splits and blends the transient and tail (decay) components of the two channels through the crossfade, while Dynamics splits and blends the loud and quiet components. The former produces punchy results, while the latter brings a pumping flavour to Transmutator. Follower completes the dynamic process modes by swapping amplitude envelopes between channels as the relative levels are crossfaded, and this can work up a proper sidechain effect when blending percussive material with sustained sources such as pads.

The Stereo and Pan modes are the most mundane of the set, behaving as you’d expect and, in the process, saving time on panning and stereo widening plugin automation. At the more effected end of the spectrum are the Pitch and Shift modes which carry out the same task, pitching A and B up/down as they crossfade, but differing in the range over which they do so. Pitch travels ±24 semitones and Shift uses ±1000Hz. These are great fun and produce some interesting modulation effects when run with a good dose of their dry signals. Hitting the invert switch at the end of the crossfader and then spinning the knob back can create the illusion of a perpetual rise/fall in pitch.

All on its own at the end of the list is Redux, a digital distortion mode that uses either sample rate reduction or a sample and hold effect to crossfade the channels through a mid-point of destruction, depending on where the invert switch is. This not only simultaneously (un)fuzzes the sources but it also brings a pitch rising liftoff quality that will suit many transition situations.

Transmutator initially seems simple to the point of limiting, but through experimentation with different source materials it becomes clear that the range of responses is far greater than expected. Mixing multiple signals through the blend modes and leaving the crossfader and wet/dry controls static can deliver distinctive sound design and mix elements quickly without auditioning another bunch of plugins. Running Transmutator within a hefty effects chain can conjure up some real audio magic.

Though clearly aimed at DJs, Ableton artists and crossfade/transition dependent producers, there is plenty of scope for use within general mixing, from quickly shifting drum room mic blends to steadily mutating synth/keys layerings, with or without the blend modes engaged. Transmutator doesn’t seem an obvious product but given the opportunity it can easily become a regular component of your audio routine, and for a fair price too. 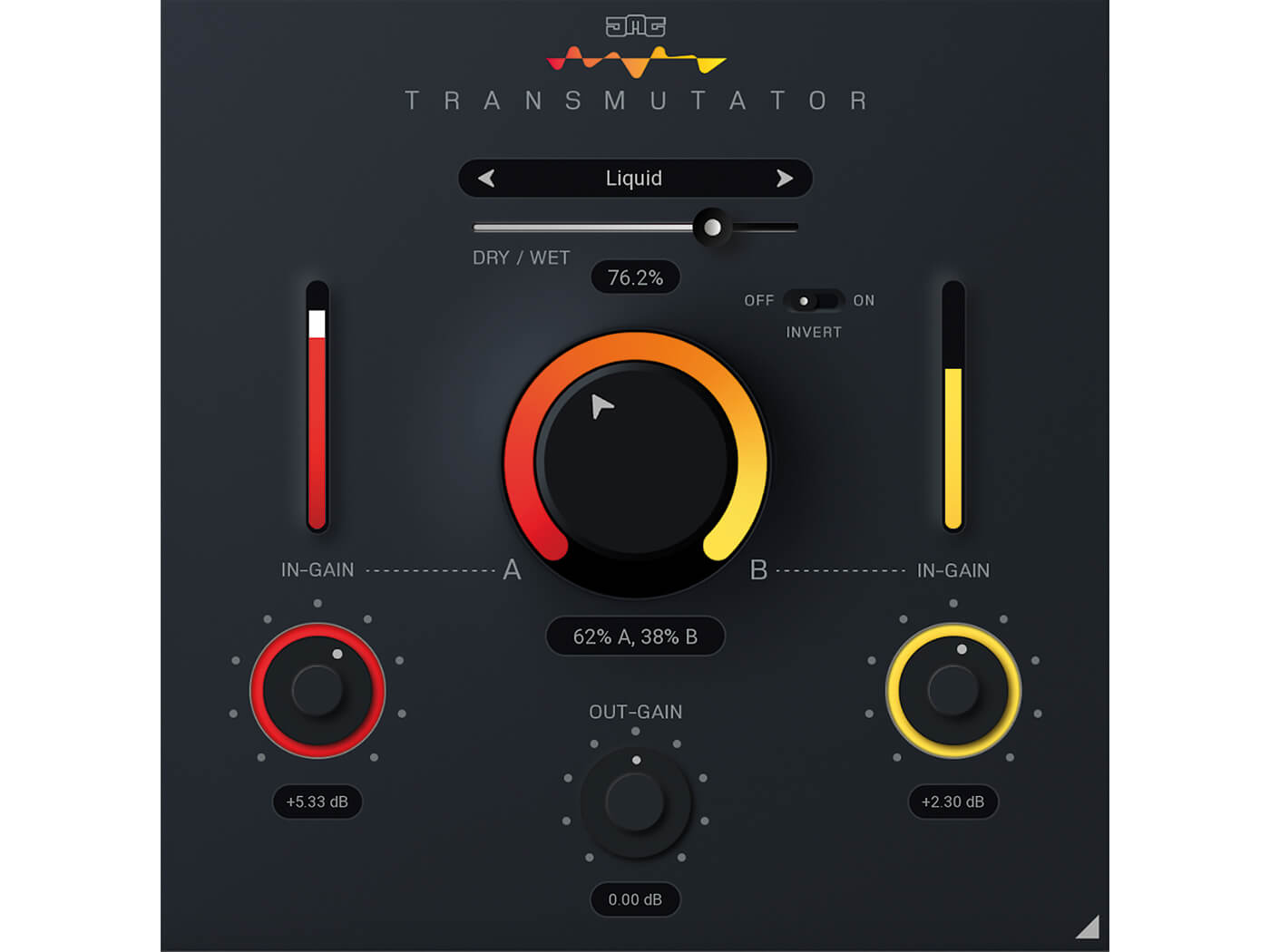 Considering the range of plug-ins that come native to DAW and production apps there isn’t necessarily anything in Transmutator that cannot be recreated with some time spent routing and automating, but if crossfades are your bread and butter, or you just don’t want to spend your waking moments creating complex transitions then Transmutator is going to save a lot of time and effort. Sound design and post-production can find an asset here too, whether for quick stem blends and changeovers or evolving, mutating soundscapes.

Transmutator is both creative tool, centred around the blend modes, and practical utility by virtue of its gain/crossfade structure and use of the sidechain routing. In this way it is an unusual plugin with few competitors, which is surprising considering the ubiquity of its core function.

Very much a sound designer’s tool for transitions and morphings, but without the input crossfading element. This centres around a formant shifting engine and a reverb with an X-Y crossfading panel to create the movement.