Finding the ideal instrumentalists to help you record your tracks can be time-consuming. Fortunately, Ujam’s latest virtual-bass toolkit lets you dispense with the auditions and thumb-slap your way to finished bass parts in no time. 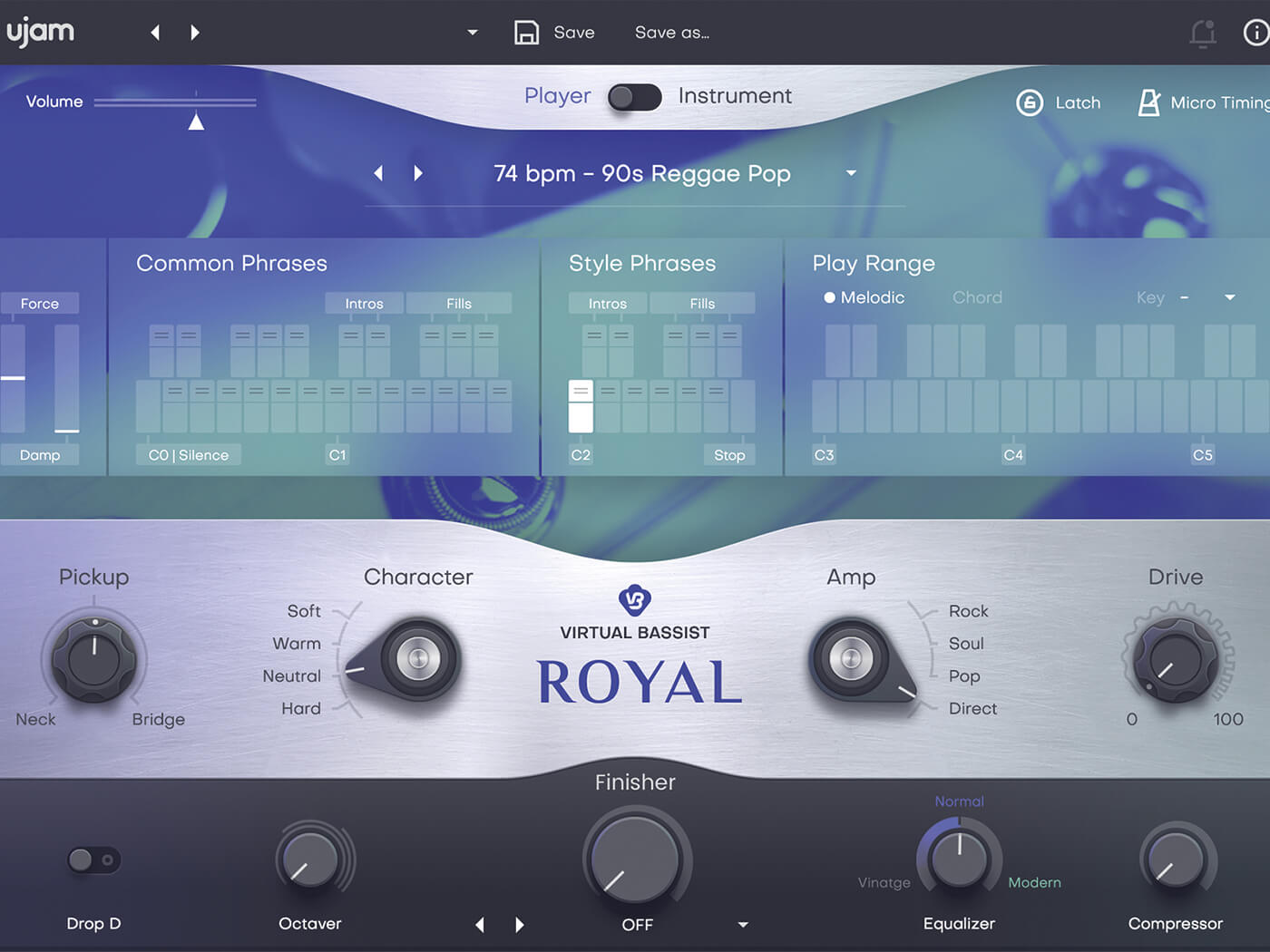 Bremen-based ujam’s virtual-band line-up has a new superstar player. Following the release of in 2018, this sequel joins the maker’s virtual drummer and guitarist packages to round out and improve its offering.

As before, Virtual Bassist 2 is a plug-in that features high-quality multi-sampled bass sounds and sequences split across three different playing styles, and should prove equally useful for producers and for keyboard players looking to employ the sounds live. The package expands on its predecessor’s content with new presets and effects, and increased MIDI functionality.

Its three aptly named bassist styles are Mellow, an acoustic upright bass; Rowdy, a picked electric bass ideally suited to raucous rock, aggressive punk and hard-edged metal; and Royal, a fingered electric bass for general session use. Each comes with a selection of amps and effects with which to fine-tune your performances. 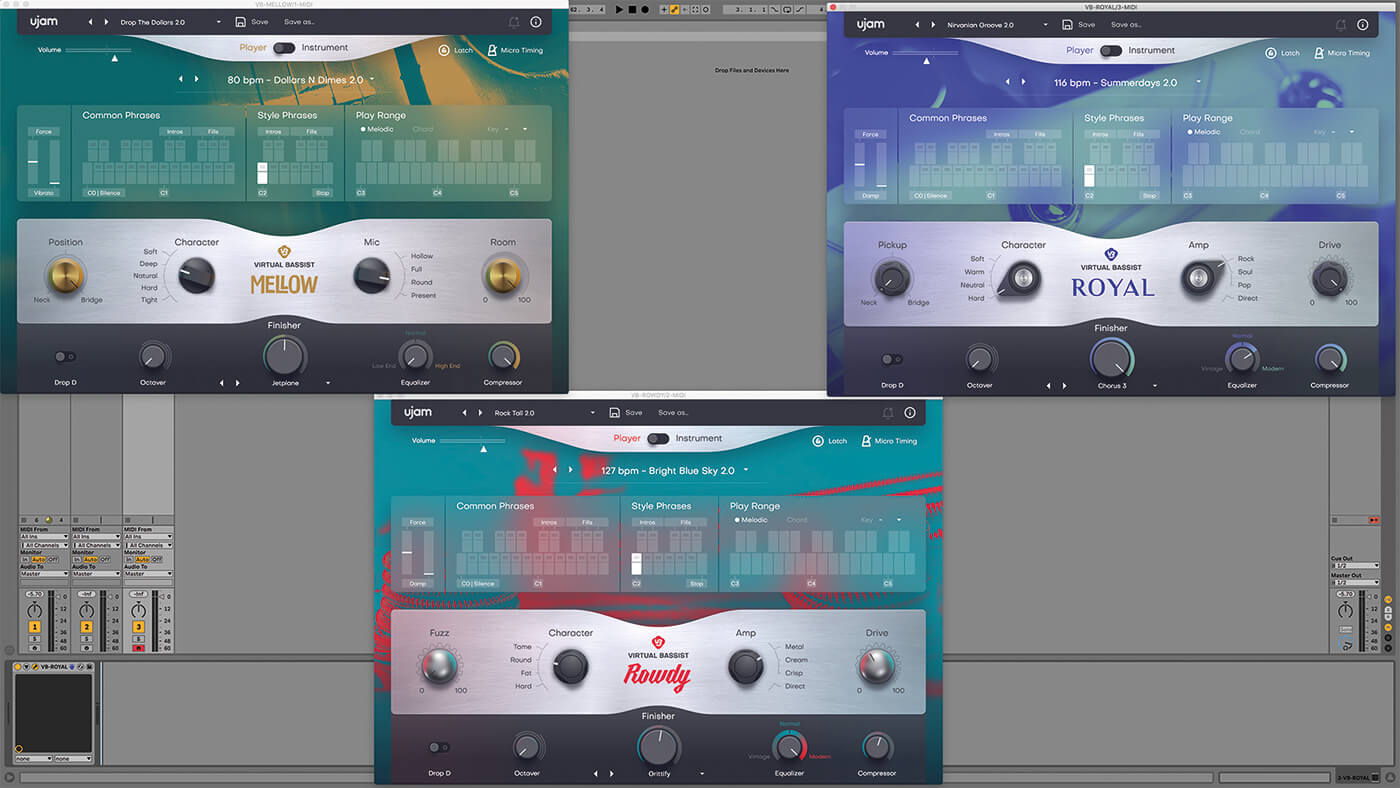 Each of Virtual Bassist 2’s three instruments install as a separate plug-in for macOS and Windows, and can be installed on a separate drive if necessary. Each shares a common interface too, so once you’ve got to grips with one, you should have no issues with the others.

You’ll find the preset management at the top of the GUIs. The Micro Timing menu in the top-right corner lets you pick your playback speed (normal, double or half-time), define your feel (behind or ahead of the beat), select your swing (delaying offbeats at a resolution of 8th or 16th notes, depending on the preset), and assign small timing variations.

Below, you’ll find four panels, with one dedicated to dynamics and the others to the patterns. The first of these is Common Phrases, which controls a set of phrases that appear in each of Virtual Bassists’ three instrument styles. These phrases are triggered by notes C0 to B1 on your virtual keyboard. The second patterns panel, Style Phrases, relates to the patterns that comprise the bass’s performance. This panel covers C2 to B3 and features seven phrases, with two intros and two fills. The third and final patterns panel is Play Range. It’s here that the patterns are triggered, when the plug-in receives notes from C3 upwards. 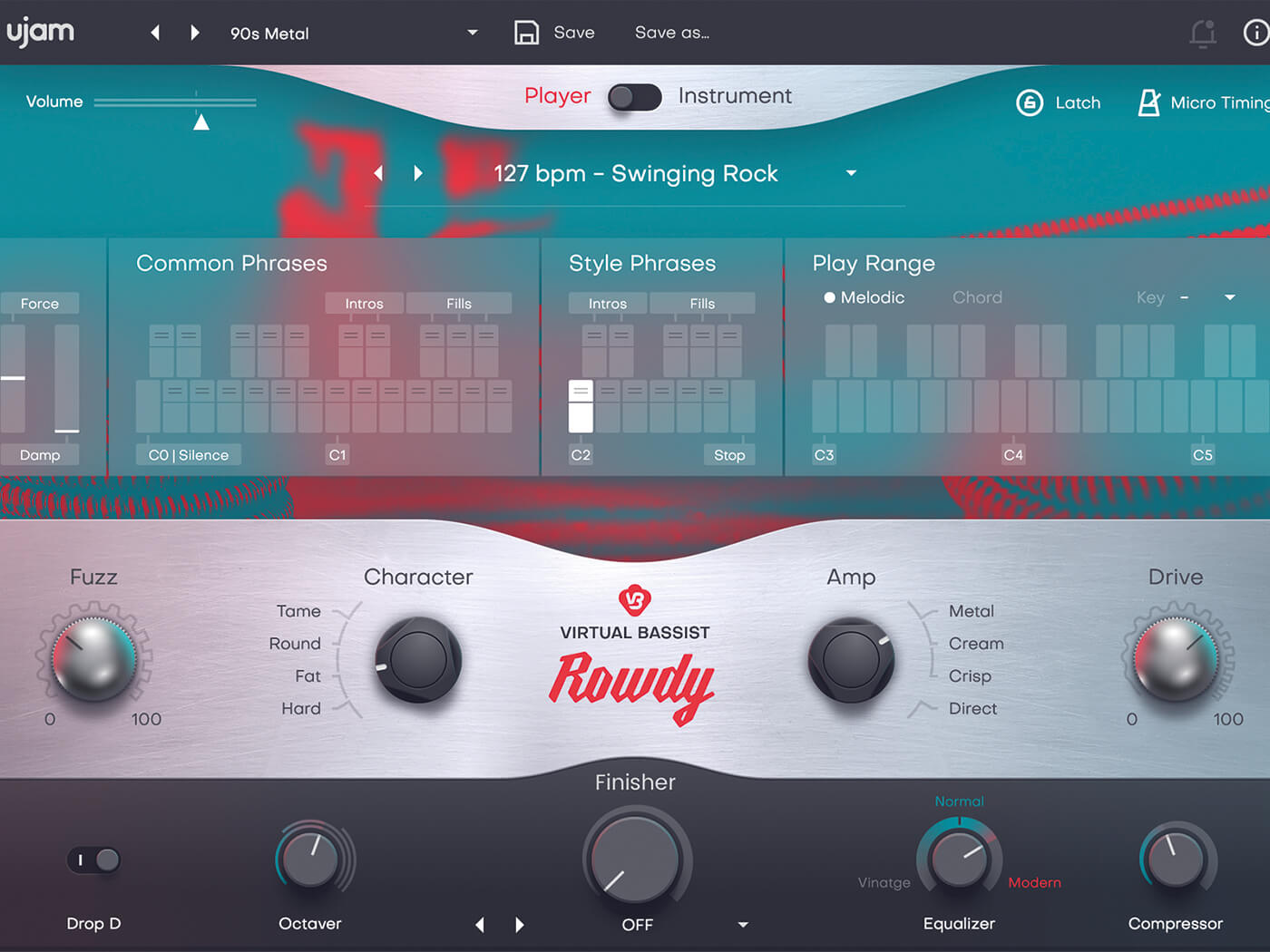 The virtual keyboard will display the notes and chords you’re currently playing. Selecting a preset at the top will load in all-new settings but selecting a style from the panels below will load only new styles. It shouldn’t take you long to get familiar with this system.

Below the patterns panels, in the silver-faced areas designed to resemble amplifiers, you can alter the characteristics of your virtual bassist, their play style, their equipment, and their room.

With the Mellow instrument, you can select the position of the virtual bassist’s playing hand, whether that be up the neck, down by the bridge or somewhere in between. You can also select from five character types that define the virtual bassist’s playing (Soft, Deep, Natural, Hard, Tight), as well as four microphone characteristics (Hollow, Full, Round, Present). You can also define the ambience of the room via a knob that runs from zero to 100.

The Rowdy instrument replaces Mellow’s settings with those more attuned to heavier playing. With this instrument, the silver panel features Fuzz and Drive knobs instead of the Position and Room knobs, respectively, and Mellow’s five character-defining play styles are replaced with four more appropriate ones (Tame, Round, Fat, Hard). Rowdy also boasts a four-way amp-characteristic knob (Metal, Cream, Crisp, Direct) instead of Mellow’s mic settings.

The Royal instrument presents more regal options for that softer, more rounded fingerstyle tone. It features a Pickup knob, with which you can tweak the pickup sound between neck and bridge, and a 100-scale Drive knob. Like Rowdy, Royal’s silver panel has a four-way character setting (Soft, Warm, Neutral, Hard) and a four-way amp knob (Rock, Soul, Pop, Direct). 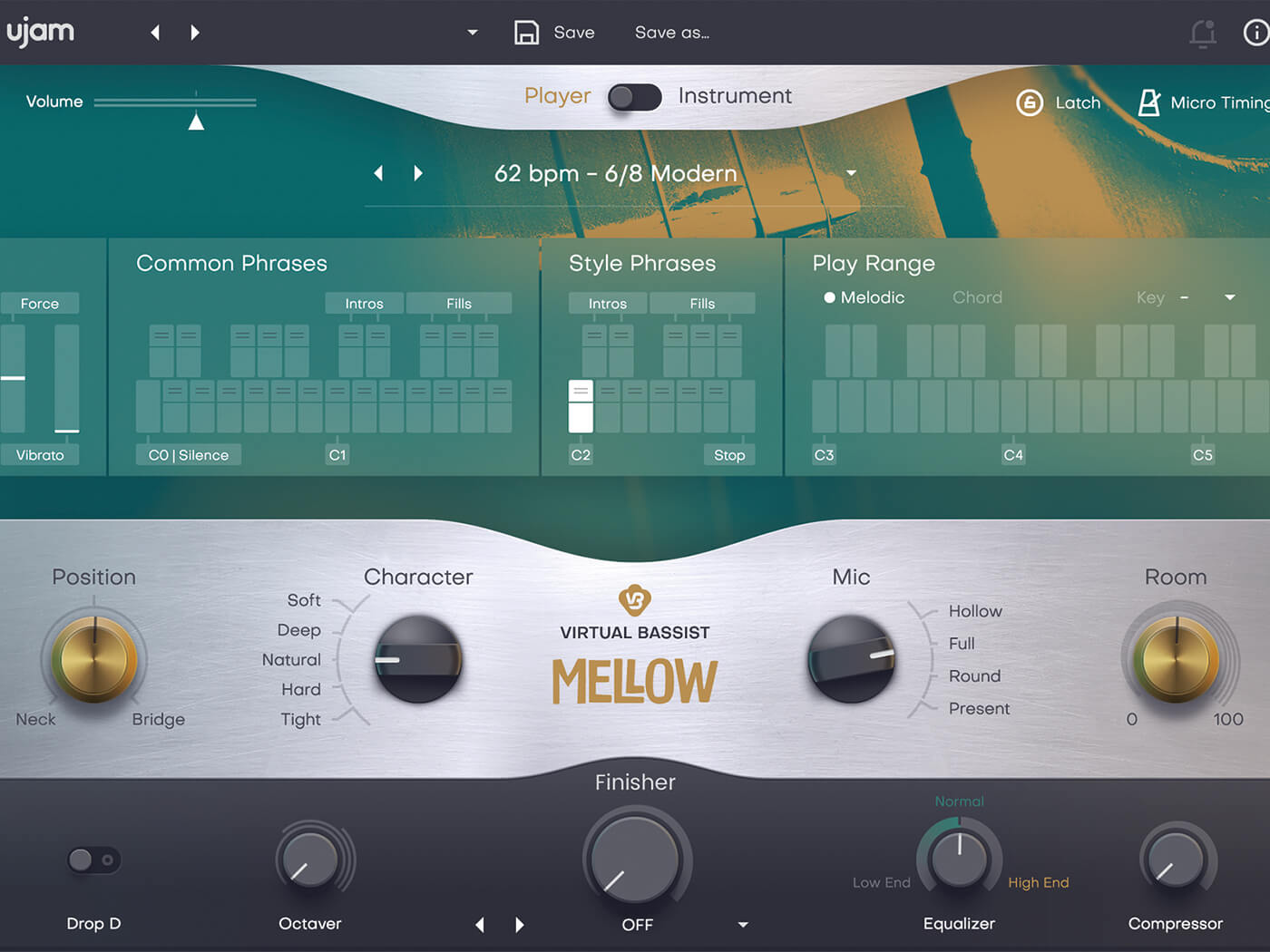 Below each instrument’s silver panel, there’s a row of additional shortcut settings that allow for maximum convenience. Here, you can toggle drop D tuning on and off, tweak your octaves, and alter your EQ, compression and, of course, levels.

Reduced to just a single knob each, the EQ and compression are simple to implement and their tonal contributions are significant. The equalizer is a 4-band parameter that goes from boosting the lows at the left to the highs at the right, while the compression simply increases as you turn its knob to the right, limiting the dynamic range and effectively making the bass louder. Of course, you could always use your DAW’s EQ and compression to apply more detailed studio-style processing if Virtual Bassist 2’s feel too rudimentary.

In the centre of this lowermost panel sits the all-new Finisher knob. Making its debut in Virtual Bassist 2, this feature is slated to be added to Ujam’s entire Virtual instrument line in time, with the German company planning to release it as a standalone plug-in too. The Finisher knob allows users to dial in one of 15 effects – chorus, flanger, filter and more – for each of the three instrument styles, making 45 in total. It’s a fantastic addition that goes a long way towards making Virtual Bassist a top-notch self-contained entity.

Alongside Virtual Bassist 2’s 20 new styles, 30 new presets and it’s freshly built Finisher section, the plug-in’s most noteworthy new feature is the ability to drag and drop phrases between your interactive keyboard and your instruments’ MIDI track. Drag the tabbed top section of a note into a MIDI track in your DAW, and the phrase will be rendered as a regular MIDI clip or region, which leaves you free to edit or apply other MIDI effects as you would with any other material. Dragging a number of these in sequence would be a terrifically expedient way to build a bassline. 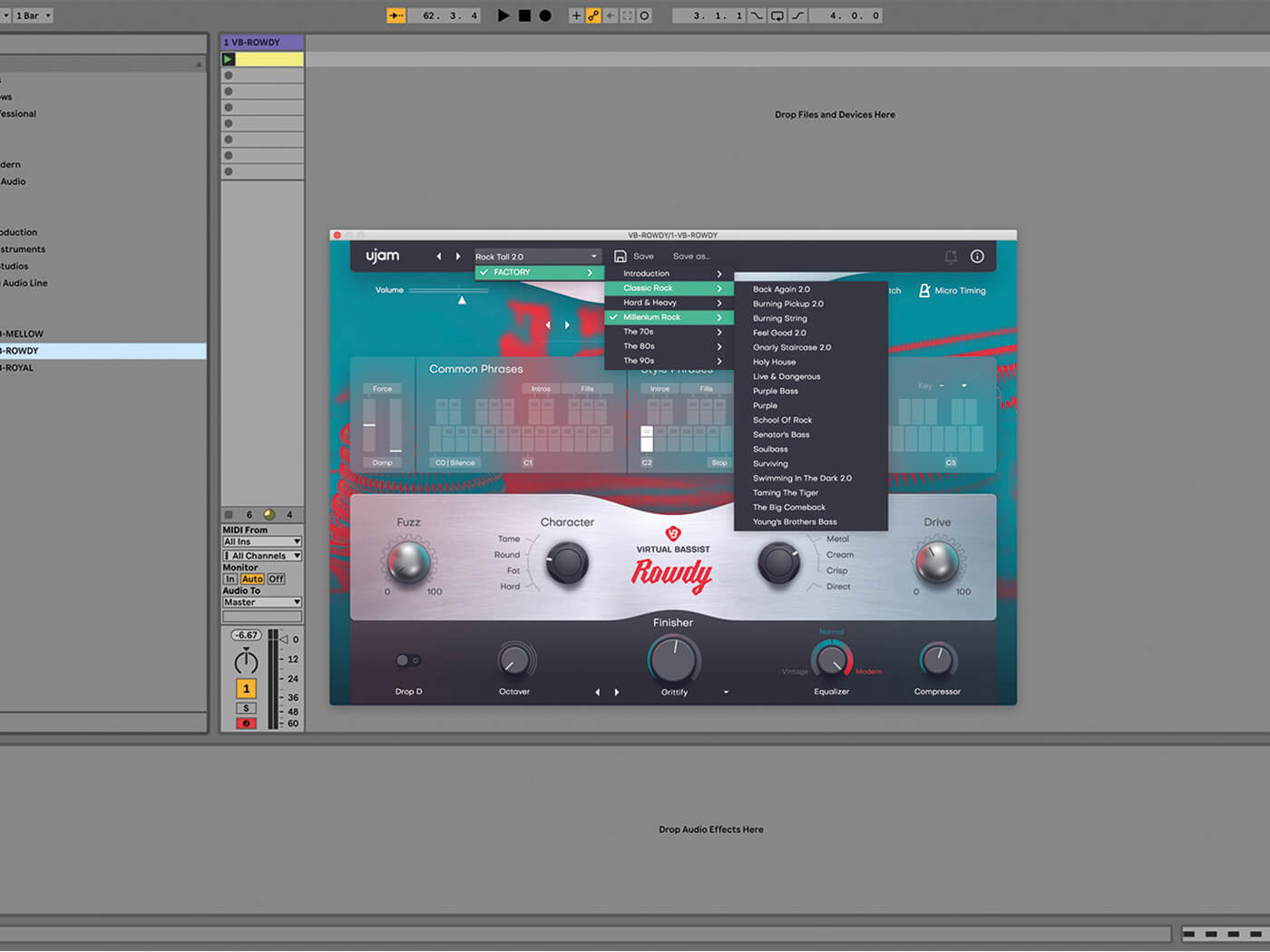 Each of Virtual Bassist 2’s three instruments sounds fantastic in its own right. Between them, you’re likely to find a tone and style suitable for any project, no matter the genre. Mellow makes for an extremely convincing upright bass sound, especially in the context of a mix. By selecting your preferred pattern, then dragging and dropping to open up further customisation options, you’ll get quick results and deep edits.

Of the three basses, Royal is the most general-purpose. It represents a wide range of bass sounds meant to be used for pop, rock, indie, Latin music and more, and its tones range from deep and rounded to bright and edgy. If you were to buy just one of Virtual Bassist 2’s three instruments to get a feel for how the system works, this would be the most educational, due to its versatility if nothing else.

Rowdy, however, may be Ujam’s best. Capable of creating the kind of monolithic low-end tones favoured by bands such as stoner-metal legends Sleep, this instrument is perfectly tailored to those genres for which heaviness is vital. Preset names such as Lemmy, Purple Bass, UK Punk, and Stoner Age should give you an idea of what to expect from Rowdy. Fiddling with its controls can take you from simple old-school rock bass to gnarly fuzz-fringed metal sounds (or anything in between) in seconds. This instrument might also prove useful if you ever delve into the worlds of darker, more industrial music too.

Virtual Bassist 2’s Instrument mode allows each plug-in to be played from MIDI notes in your tracks or via a keyboard controller, and its keyswitches section lets you activate legato, slides and headnotes. You could comfortably compose using the phrases before flipping to Instrument mode and playing some bass parts on stage using a keyboard. Even without the player capabilities, though, this is a fantastic set of sounds in a ready-to-mix format.

This package provides an infectious way to put together realistic bass sounds and parts, thanks to its significant customisation options. Virtual Bassist 2 is a boon for busy composers and bass-loving producers alike.

The market features no shortage of sampled bass packs. But many can’t quite match up to the well-tailored examples of Virtual Bassist 2, each superbly built and sharply attuned to a particular style. For those of us who can’t play as well as we’d like, this plug-in’s preset patterns will prove invaluable, able to flesh out your productions with wonderfully realistic bass guitar.

Soundtrack composers assailed by deadlines will find much to shout about with Ujam’s Virtual series. Like its stablemates, Virtual Bassist 2 is intuitive and efficient. Not only will it allow you to craft brilliant bassline quickly, they’re so authentic sounding that you might even convince listeners you played them yourself. 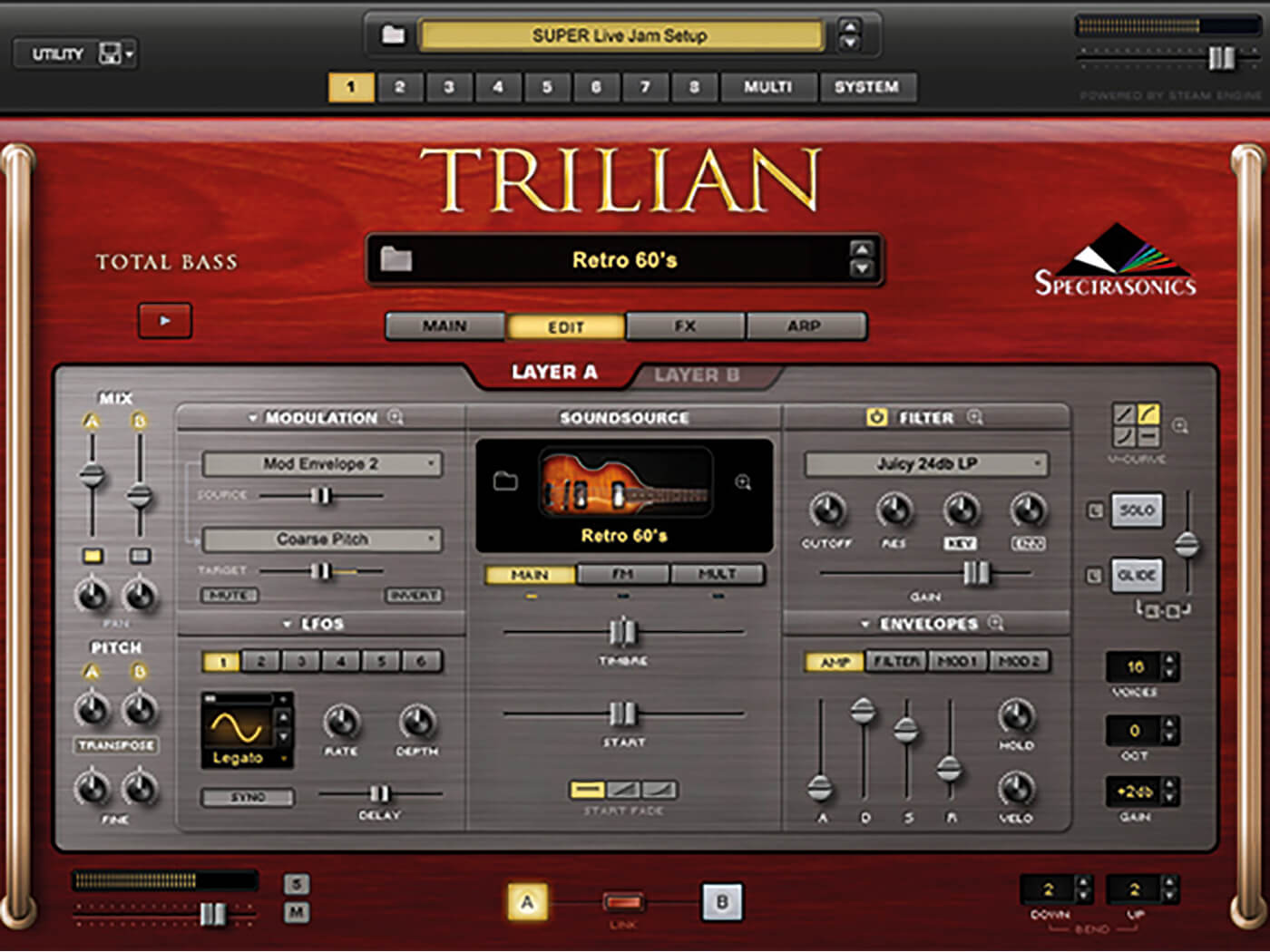 This plug-in features multiple bass varieties, including four-, five-, six-, seven- and even eight-string bass guitars in fingered, picked, fretless and slap incarnations. Individual instruments include the Music Man 5-string, and the unusual Chapman Stick, and the effects include a novel take on the legendary Moog Taurus foot-operated synth. 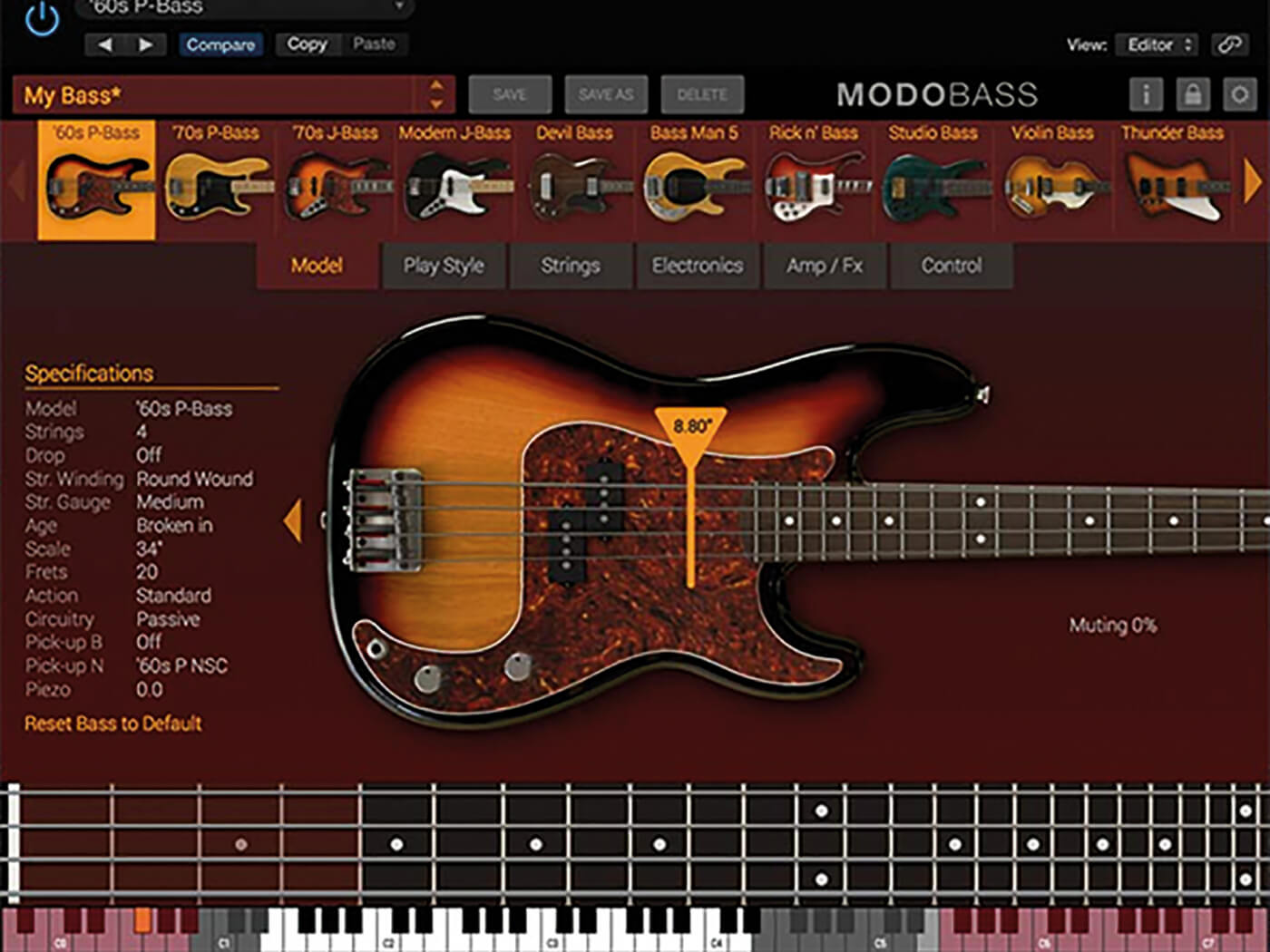 This physically modelled software bass functions as a plug-in or standalone for macOS and Windows, and features 14 electric basses, including those based on the six-string Fodera Custom and the five-string Dingwall Combustion. All of its bass instruments can be used as six-strings.