UJAM Braaass review: The epic sounds of Hans Zimmer brass in one fun and accessible instrument 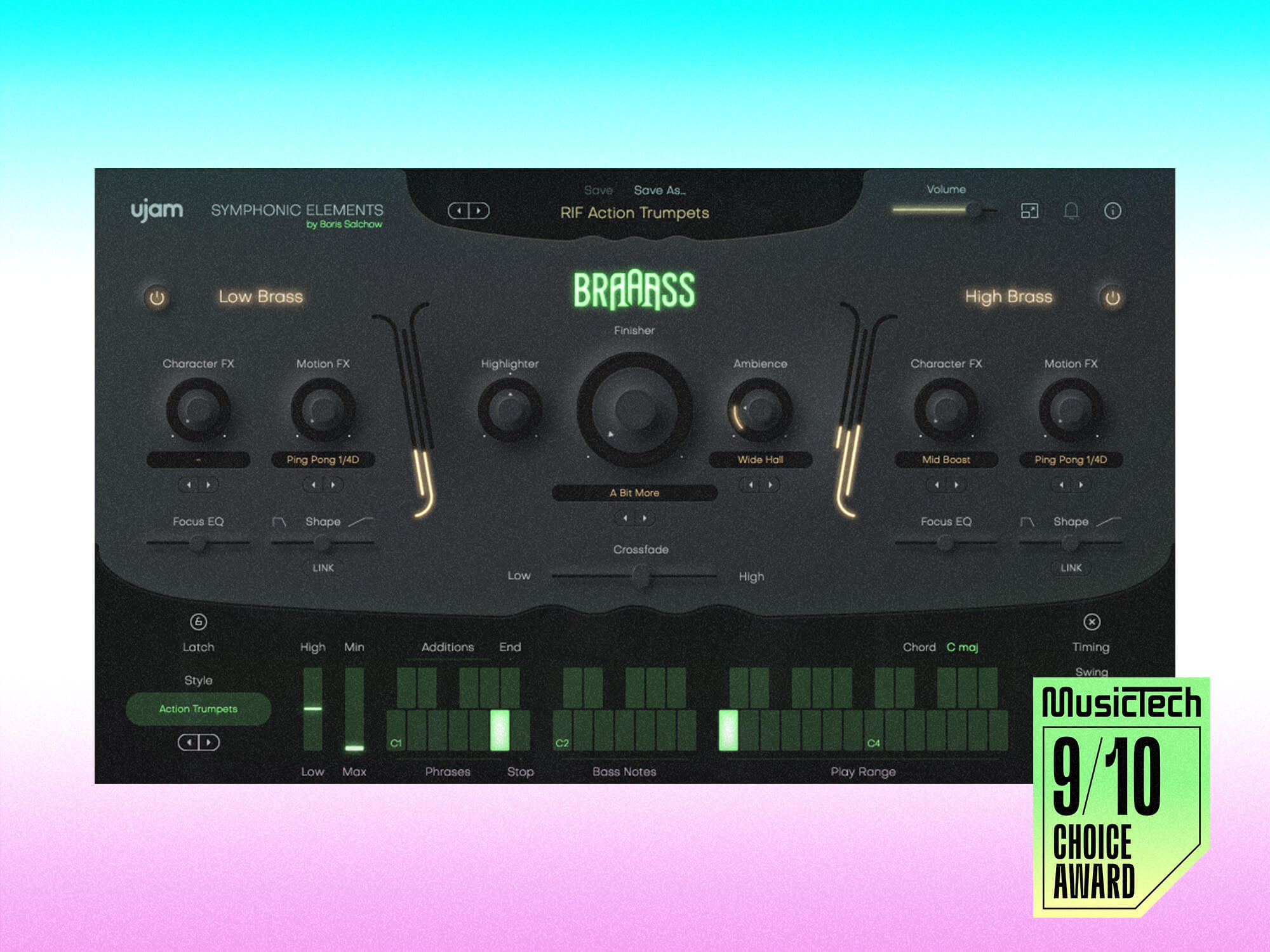 Hans Zimmer is one of the most prolific and renowned composers in modern cinema. What you may not know, however, is that he is also one of the co-founders of virtual instrument company UJAM. Braaass follows on where UJAM’s Striiiings and Drums cinematic instruments left off, with a collection of playable brass phrases recorded at Hans Zimmer’s Remote Control Studios. Composer Boris Salchow returns to map and arrange the multi-layered performances into a fun and tactile sample instrument. But just how successfully can the Oscar-winning composer’s sound be condensed into a single plugin?

The package comes in at a relatively modest 6GB and includes 78 playing styles, with French horns, trumpets, trombones, cimbassos and tubas split into low and high brass sections. Each section can be turned on and off, or you can crossfade between them to add subtle variations (which is also mapped to the pitch bend wheel by default).

Braaass’ styles include heroic staccato melodies, fast-paced, rhythmic action riffs, and ominous, longer swells. Perhaps the best element of Braaass is the genius way UJAM has mapped it to the keyboard. The low octave presents keyswitches that give you six variations on the selected phrase, often with a subtle increase in intensity as you go up the keyboard, and culminating in a key that creates an end note to smoothly stop the performance. The black keys then present one-shot samples that you can use to embellish the riff – although a lack of envelope release occasionally makes these sound unnatural.

You then have an octave that changes the pitch of the bass part, and finally, two octaves that set the range so you can steer the playback to different chords. When you combine this with a latch function and performance intensity mapped to the mod wheel, you’ve got an intuitive way to perform epic, cinema-quality brass phrases, which is a lot of fun. It can do subtle performances but, really, the focus here is on big and bold.

To help tighten your performance, you get Key and Sync controls to restrict the notes, and to sync playback to the DAW, plus timing controls to half or double the speed, and to add some swing. Most of the phrases are relatively simple, so can be used as building blocks to add additional instrumentation, but you can’t really play melodies using Braaass like you might with a more traditional orchestral instrument. It works best when you embrace the natural phrasing of each part and gently move chords and modulation to create smooth, flowing sections.

In terms of controlling the chords and phrases, there’s a fairly limited octave range, but this keeps everything in the optimum place to make it sound big and professional. We encounter a few situations where there are more than two layers playing and we can’t separate them further, which is a pain. That said, adding a third set of controls would greatly clutter the interface, so we’re happy to live with it.

Alongside the straight-up orchestral phrases, you have several editing and processing tools at your disposal to lightly tweak or completely mangle the sounds. Each layer has a Character FX dial with 30 effect types that includes various filters, a range of saturation and distortion effects, plus several compression, EQ and other useful settings. On top of this, there’s a Motion dial for time based effects such as delays, chorus, vibrato, sidechain pumps and rhythmic filter sweeps.

Rather than offer separate controls to edit the effects, there are extra presets for things like different delay time divisions. Although this makes it feel less editable, it helps to keep the GUI nice and clean. There’s also a Focus EQ that can shift the balance from the lows to the highs, and a Shape slider that on one end will increase the transient by moving the sample start, and at the other will give a longer and smoother attack.

To top things off, you get a master Finisher dial in the centre, with global effects that range from utilitarian touches – like adding some big low end, extra width, or some additional crunchy drive – through to some much wilder and more creative chains. These include glitchy, flanged chops, drone-like washes, and swelling pitch modulations. Whether it sees much use will massively depend on the type of music that you’re writing. As there is only one dial for the entire effect, it should be obvious quite quickly whether each preset will work or not for a given situation.

The master section also includes a Highlighter (which is basically a lightly resonant 24dB low-pass and high-pass filter in a single dial), and an Ambience effect with a mix of interesting reverbs and a handful of additional delays.

Initially, we were worried that the lack of deep editing might make Braaass feel a little basic, but the range of options in each menu makes it capable of a surprisingly varied world of sound design. And as there are no extra menus or pages, everything is fast and tangible. The manual says that there’s MIDI learn, although we aren’t able to get it running in Logic Pro and so had to use the Smart controls to help assign an external MIDI controller.

Although you have flexibility when it comes to the processing and effects, you are more limited when it comes to the raw orchestral sound. As you’d expect from Hans Zimmer’s vault, all the samples are high quality, with a polished, modern Hollywood sound. However, there’s a baked-in sense of reverb and space on a lot of the patches that comes from recording through far mics (or perhaps from uneditable reverbs). This is one of the elements that gives Braaass its huge and epic feel, but the lack of closer mics makes it harder to get a more intimate or more raw-sounding finish. Of course, having additional close samples for every phrase would double the library’s size and is arguably not what the Hans Zimmer sound is about, but it’s worth noting nonetheless.

Hans Zimmer’s music has in part, come to define the sound of modern, big-budget cinema. Braaass successfully puts that recognisable sound at your fingertips, which means you may run the risk of sounding a little copycat if you’re not careful. Thankfully, UJAM also provides a host of creative effects that can be used to creatively twist the raw material. This can be heard in the 260 presets that showcase additional patches like deep and atmospheric pads, EDM leads and experimental effects. This helps to make Braaass a more flexible tool that’s not just for soundtrack work, but also for adding big brass textures to electronic music styles and beyond. Overall, it’s a well-thought-out instrument designed for those who want something a little more accessible than your average orchestral library.