With kits spanning a pantheon of rock’s biggest giants, Toontrack’s latest assortment of drum sounds grants instant oomph straight out of the box.

It’s always useful when a product provides a solid backbone, with further potential for expansion. No product fits this description better than Toontrack’s classic package, Superior Drummer 3. Extending the ethos of the more modest EZDrummer package, Superior takes the format to greater heights, with a far more extensive sampling of drum kits, and an increasing suite of expansion packs, each offering laser-accurate categorisation of sound and genre.

To offer further pedigree, the new Legacy of Rock SDX draws on the experience of recording leg-end Eddie Kramer. You might not be familiar with his name, but in the best traditions of unsung re-cording heroes, Kramer presents a unique and impressive roster of artist collaborations, extending back to the sixties from his work with The Beatles, The Rolling Stones, Led Zeppelin, through to the entire canon of Jimi Hendrix. 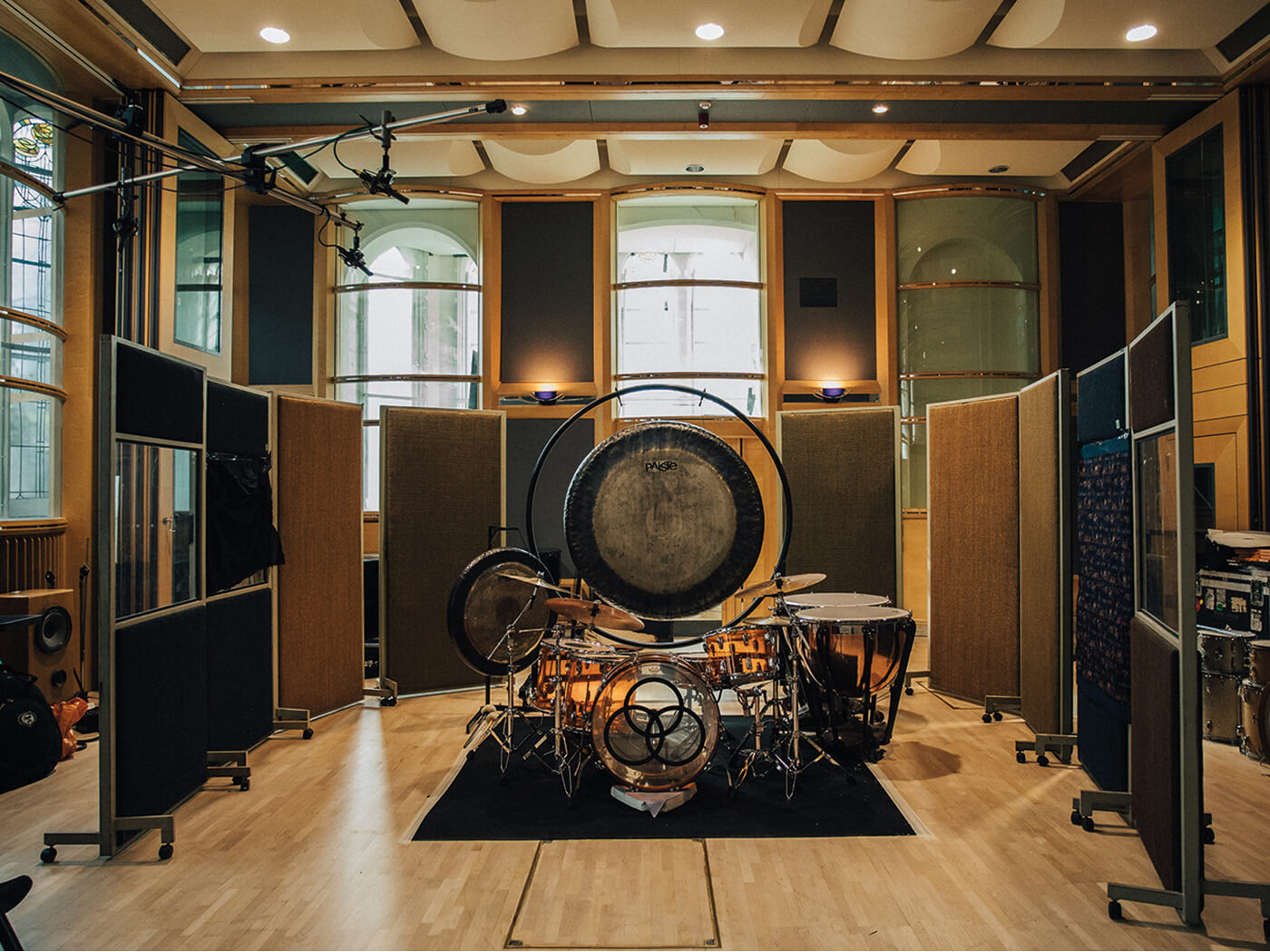 You’ll need a copy of Superior Drummer 3 to take advantage of this library, which acts as an excellent compliment to the superb default sample set, which ships with the main package.

This SDX expansion offers a somewhat reverential collection, centred around five different drum kits which have been recorded in their complete forms. Unlike some of Toontrack’s other SDX packs, Studio 1 at AIR studios is the constant location for the sample capture of all kits. This offers the opportunity to capture the room in a full surround mode, up to 5.1 which does add up to a sizeable disk-space tally at 180GB, however there is a prompt at installation to go for the lesser stereo option, which reduces installation space by half.

Alongside the kits themselves, two timpani are offered, as well as two gongs, the largest of which is a whopping 60” in size! The instrumentation greatly benefits from a number of articulations; apart from the usual sticks, there is inclusion of brushes, mallets and even fingers/hand strikes, which have been captured in certain sections of the library, offering diversity in colour. 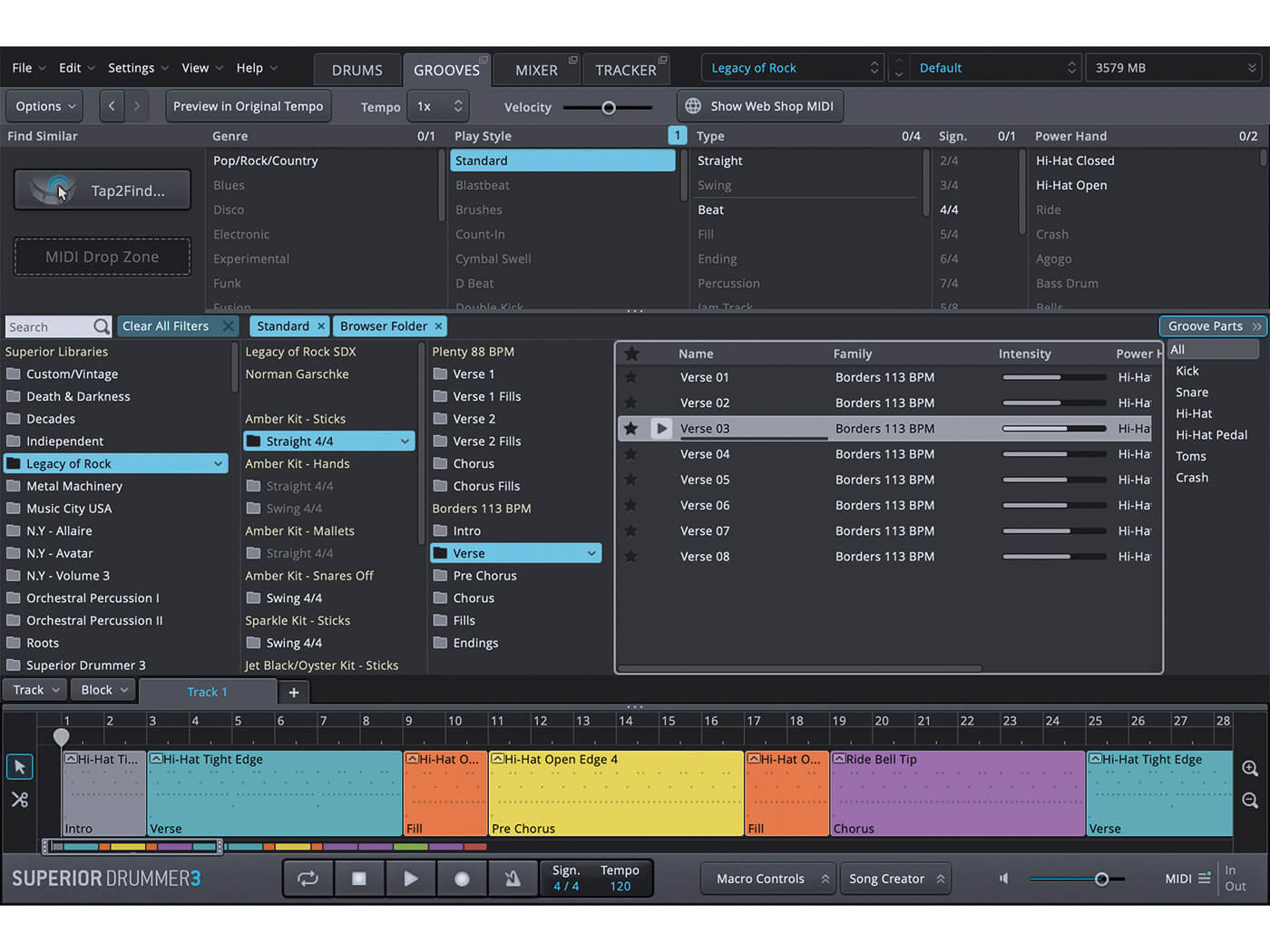 Toontrack has taken its usual high-grade care in the sourcing of drums kits, while reflecting various landmark recording moments from Eddie Kramer’s career. The first of which is a Ludwig Vista-lite kit, known in this library as the Amber kit. This is complimented by a Paiste 2002 Big Beat hi-hat, along with two timps and the smaller of the two gongs.

The kit represents a reproduction of John Bonham’s live setup, as used at Madison Square Gardens in 1976. In this performance, Bonham exhibited his classic sound, alongside subtlety and nuance in both timbre and dynamics, hence the inclusion of many different articulation strokes. Listening to a groove on this beast-of-a-kit for the first time, the depth of drum recording is obvious; the kick benefits from enormous punch and bottom-end extension, with a decay tail which is hugely recognisable from the Zeppelin classics.

Further exploration reveals considerable microphone detailing, with the kick boasting a compliment of three mic’s; two from AKG and the sublime Neumann U47 FET. Feed these dry signals into AIR Montserrat Mic Pre’s and you have a recipe for that classic rock sound which delivers instantly. The snare is crisp, while the hi-hats work very well alongside, with plenty of top-end sharpness, while also complying with the hefty weightiness required for the setting.

The Sparkle Kit has a similar John Bonham affiliation, providing close similarity to the kit used on Led Zeppelin II, from 1969. This kit centres around a Ludwig 70s era classic kit. While there are arguable similarities with the Amber kit, the kick feels flabbier by comparison, without the extensive decay previously heard with the Amber kit.

As we move into another phase of Eddie Kramer’s career, the Jet Black kit presents a very near replica of the kit Charlie Watts used on The Rolling Stones seminal Beggars Banquet. While this kit is from a similar late-sixties era, it represents an altogether tighter cohesion, largely due to Watts’ love of jazz. Based around a Gretsch Rock’n’Roll kit, the smaller kick is pronounced, with a tight-ness in the overall detailing of timbre, throughout the entire kit. While it is a rock kit, you can immediately hear its suitability for genre such as old-school drum and bass, in part thanks to the further contribution from the snare, which like the kick, is predictably tight.

The Oyster Kit also has an affiliation with the same Stones’ era, being something of a hybrid kit, which would have been used on the track Sympathy for the Devil, in 1968. There is a degree of intimacy with this kit, partly due to its smaller size, which lends itself to more acoustic or smaller scale work. The room adds depth and colour, which can be set back or removed from the mix, along with the Overhead mic’s, making it perfect as a centrepiece for acoustic combos.

The final kit in the lineup tugs a forelock to Jimi Hendrix; drummer Mitch Mitchell, who played with Hendrix, also had a background in jazz, and you can instantly hear this influence in the snare, with its beautiful ringing decay. Based around a Ludwig Classic kit, it’s crisp and tight, and perfect for either classic or contemporary work. 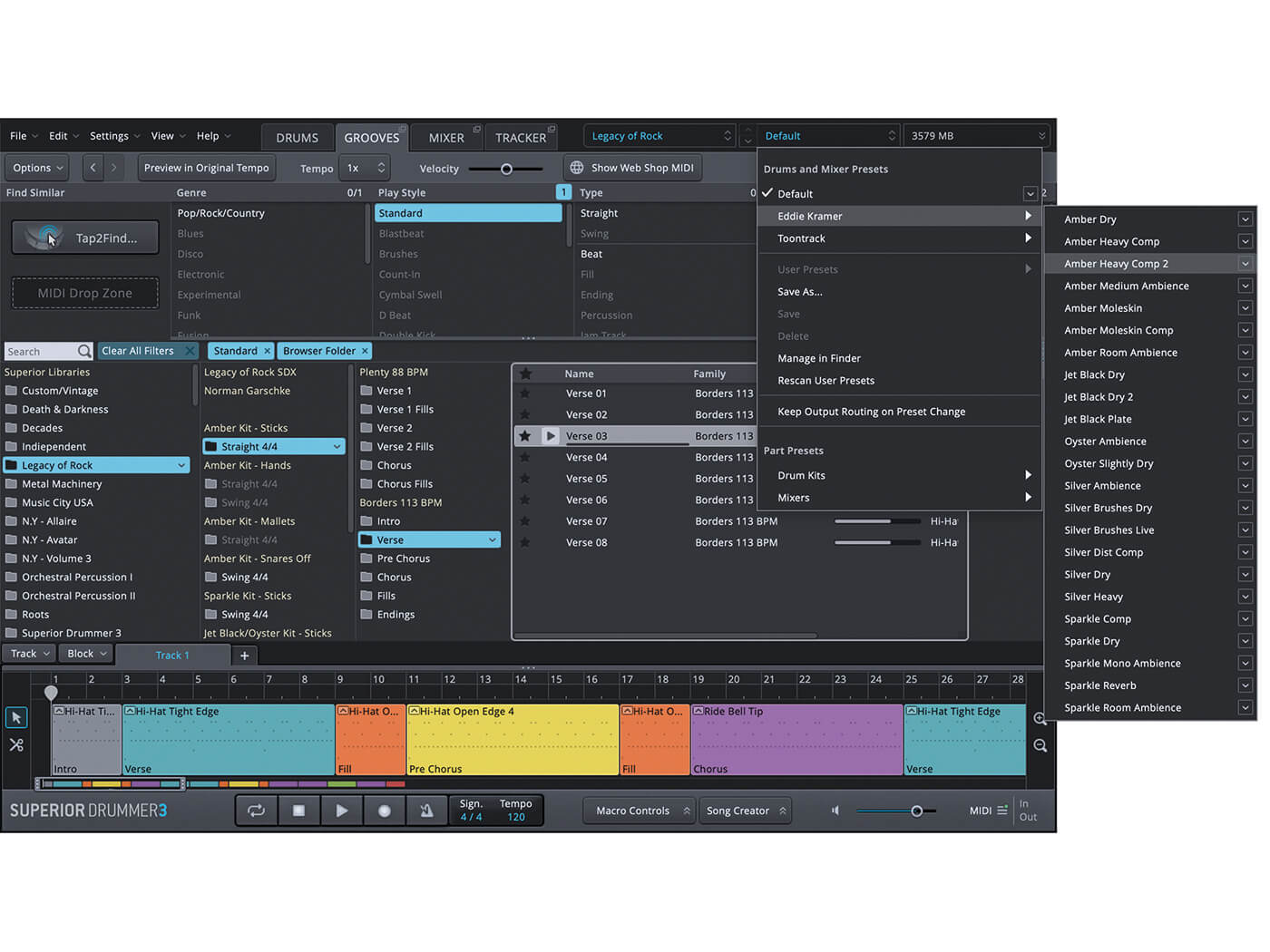 We were careful to audition all of these kits in their raw form. The variety of mic placements, configurations and ambience creates a stunning balance for anyone interested in exploring the numerous mix options for blending different signals. However, we must also give heavy praise to the vast array of pre-prepared mixes, curated by Eddie Kramer himself. The resultant sum of signals is pretty diverse, with a continual seam of quality running through the library.

The mix options available within Superior Dummer 3, coupled with some very capable effects processing, means that those classic sounds are immediately at hand, mix-ready and beefy as you like. As an example, the Amber kit provides buss’ing which sums all three snare mic’s, providing a huge fat signal which is deep and punchy. There’s also further colour from a Tape Buss, which is subtly blended into the mix for satu-rated colour. Then there’s the exaggerated and heavenly decay of the Kick drum. It’s impressive, almost on a stadium level.

Toontrack has included a generous supply of new and complimentary MIDI grooves, which take advantage of all dynamics and colours. This includes some very virtuosic timpani playing, which admittedly might have limited contextual use, but alongside the highly recognisable drum grooves from bygone classics, it all melds together brilliantly. Finally, and before we hear any cries of it needing more cowbell, you’ll find one of those in the suite too! 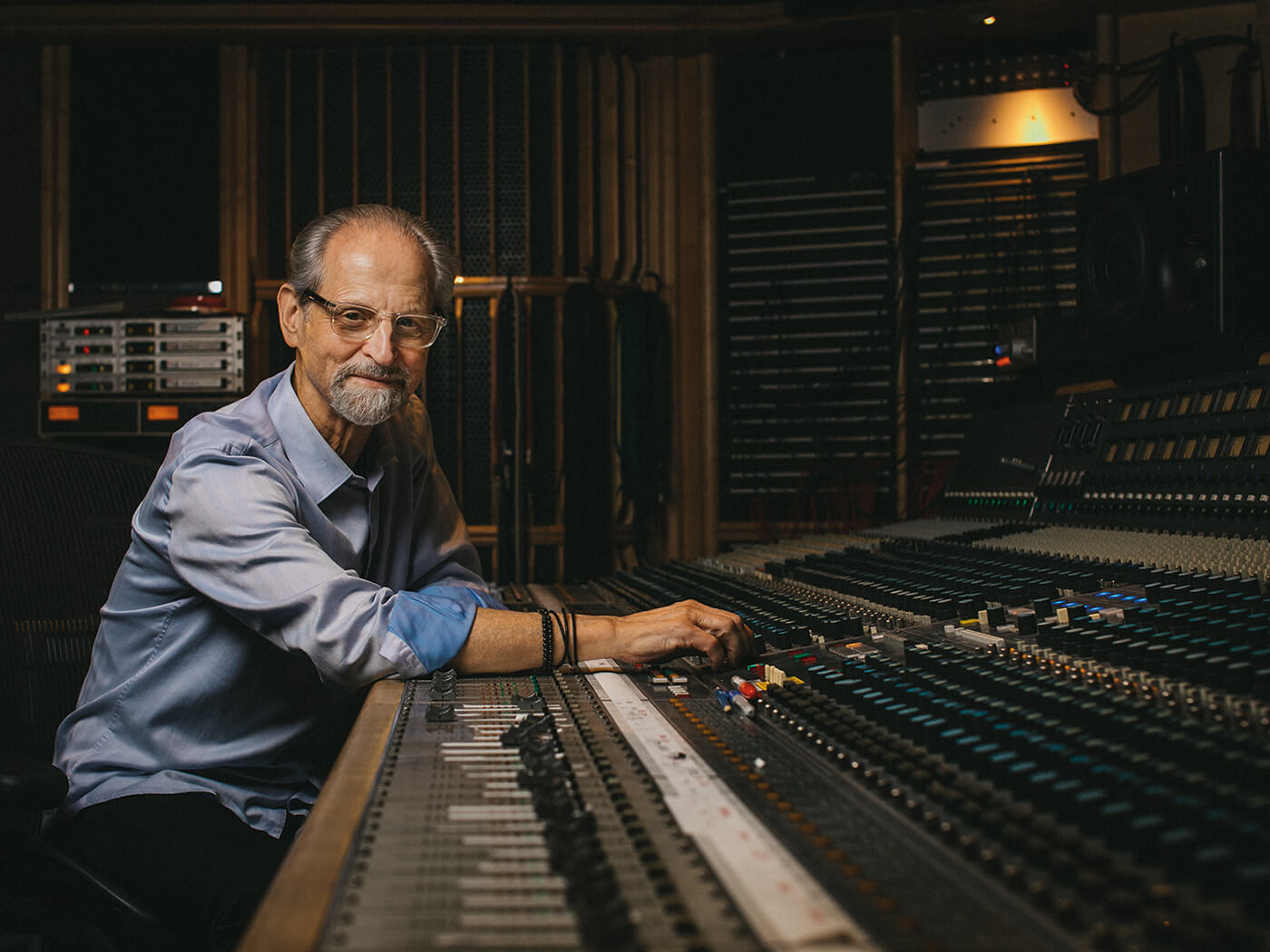 Legacy of Rock provides strengths in several areas; as a new source of great drum sounds with weight and punch, it’s utterly superb. The included kits are very different to the default SD3 content, which makes it a perfect addition for many different styles of music. There is enough variance within the included kits that you could veer away from the rock mantra, and find plenty to explore musically. Coming back to the package’s main calling card, the involvement of Eddie Kramer provides an impressive kite mark. Load up a basic kit and it will sound great, while allowing plenty of creative potential for blending mic signals. Load up some of the accompanying mix presets, and those kits absolutely come alive. It really does have that classic rock sound, straight out of the box, but with all of the options for complete customisation, thanks to Toontrack’s incredibly strong software, which houses this suite.

Native’s take on the drums package delivers a cleaner sound, but with work and processing, it’s possible to achieve very similar stadium-rock results. Requires Kontakt player, which is freely downloadable at the point of purchase.

This expansion for the budget-friendly EZDrummer 2 suite, contains many of the highlights from its bigger brother, in a more eco and affordable package. Also produced by Eddie Kramer, it’s a great alternative, at nearly half the price.