The latest expansion pack for EZDrummer shelves any sense of ambiguity and zeroes in on the most important drums in the kit. We get a kick out of its snappy snares. 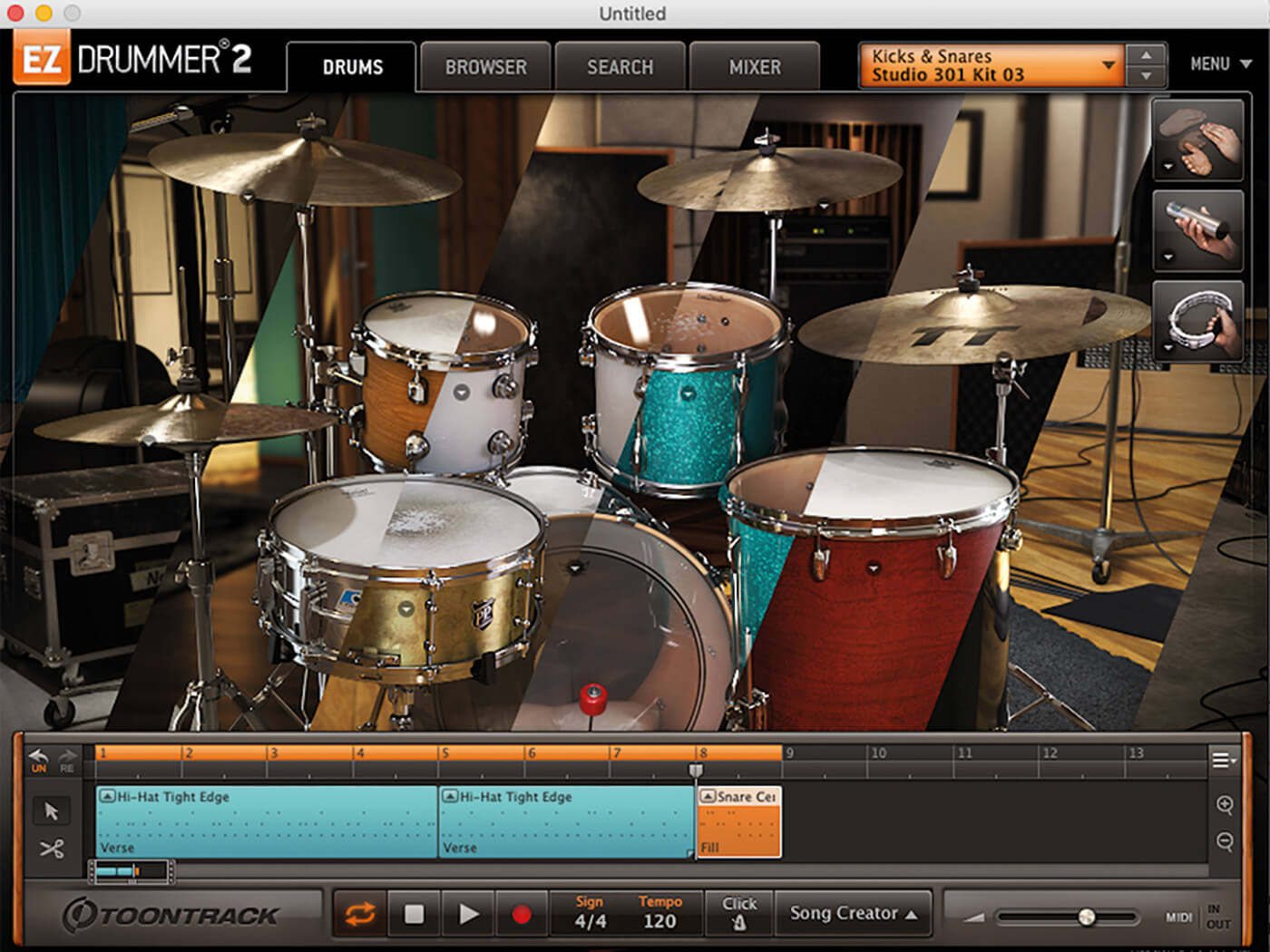 If there’s any company that can lay claim to having changed the way we work with drums in our DAWs, it’s Toontrack. The company’s EZDrummer was met with acclaim upon its 2006 release, while its Superior Drummer drum-based DAW elevated an already useable product to another pro-inspired level, with the continuous slow release of expansion packs that have left few percussive stones unturned.

What’s in the box?

Some of Toontrack’s EZDrummer expansion packs have titles that leave a lot to the imagination. Though thrillingly named, with Action, Drumkit From Hell, and Twisted Kit, for example, it’s not entirely clear what you’re getting. That isn’t an issue with this self-explanatory release. Kicks and Snares clocks up a fair few air miles by offering a whopping 31 kicks and 43 snares, all meticulously sampled and exploiting legendary studio locations such as London’s AIR and Konk, and Australia’s NSW and 301.

While there are only so many drums in the world, I was fairly surprised to see so little repetition in drum brands and specifications from one recording venue to another. There are, for example, numerous references to the classic Ludwig Black Beauty snare but always in a slightly different sizing or vintage, leaving it to individual recording spaces to work their acoustic magic on the sample. 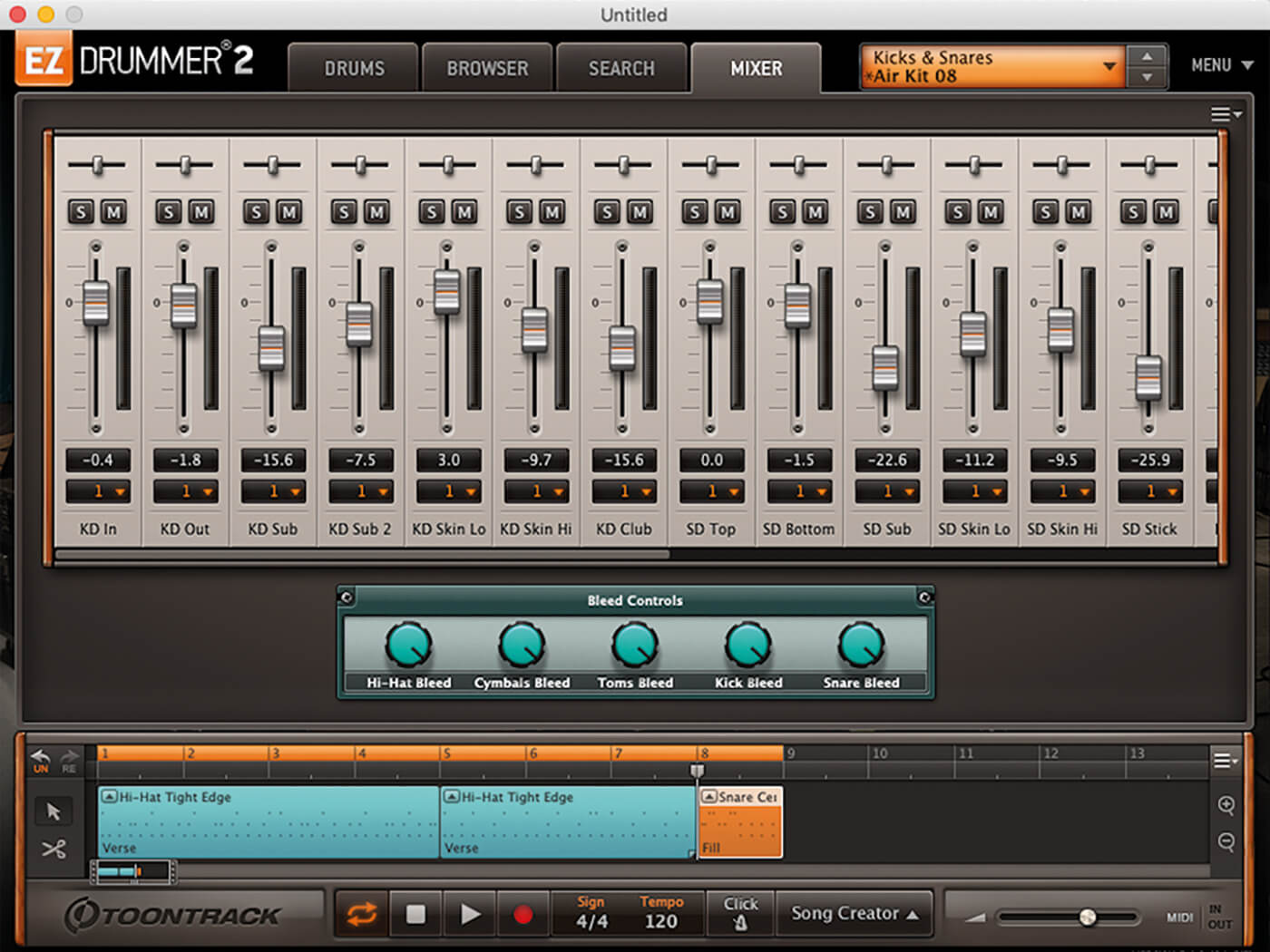 As this is an EZX Expansion, installation and recall is easy. Toontrack has collated various kits from each recording venue, and while the library is centred mainly around kicks and snares, it also includes a nice set of Sabian cymbals and hi-hats, as well as a set of three Slingerland toms, all of which will recall as part of the basic preset kits. This forms a mere portion of the Toontrack ecosphere, though – you’re free to combine elements from other expansion libraries as you wish, though Kicks and Snares’ included extras sound so good that you won’t be left clamouring for more.

I start with a trip to AIR, where 16 assigned kits await me. After auditioning them, it quickly becomes apparent that there is considerable variance in tonal colour throughout the kits. I find some of the sounds a little flabby but that probably has more to do with my personal preferences than Toontrack, as I favour more modern, tighter sounds. You have nothing to fear in this regard, though, as the choice across the board is extensive and colourful, and the kits offer ample levels of control.

Case in point: I loaded the mixer and was left flabbergasted by the available controls, from the ability to manage the bleed between channels to the seven different kick and six snare mic channels offered. The control over timbral colour is a dream come true, so even with my misguided aversion towards the looser-sounding content, it’s possible to tighten things up via the mixer and attune it to my tastes. 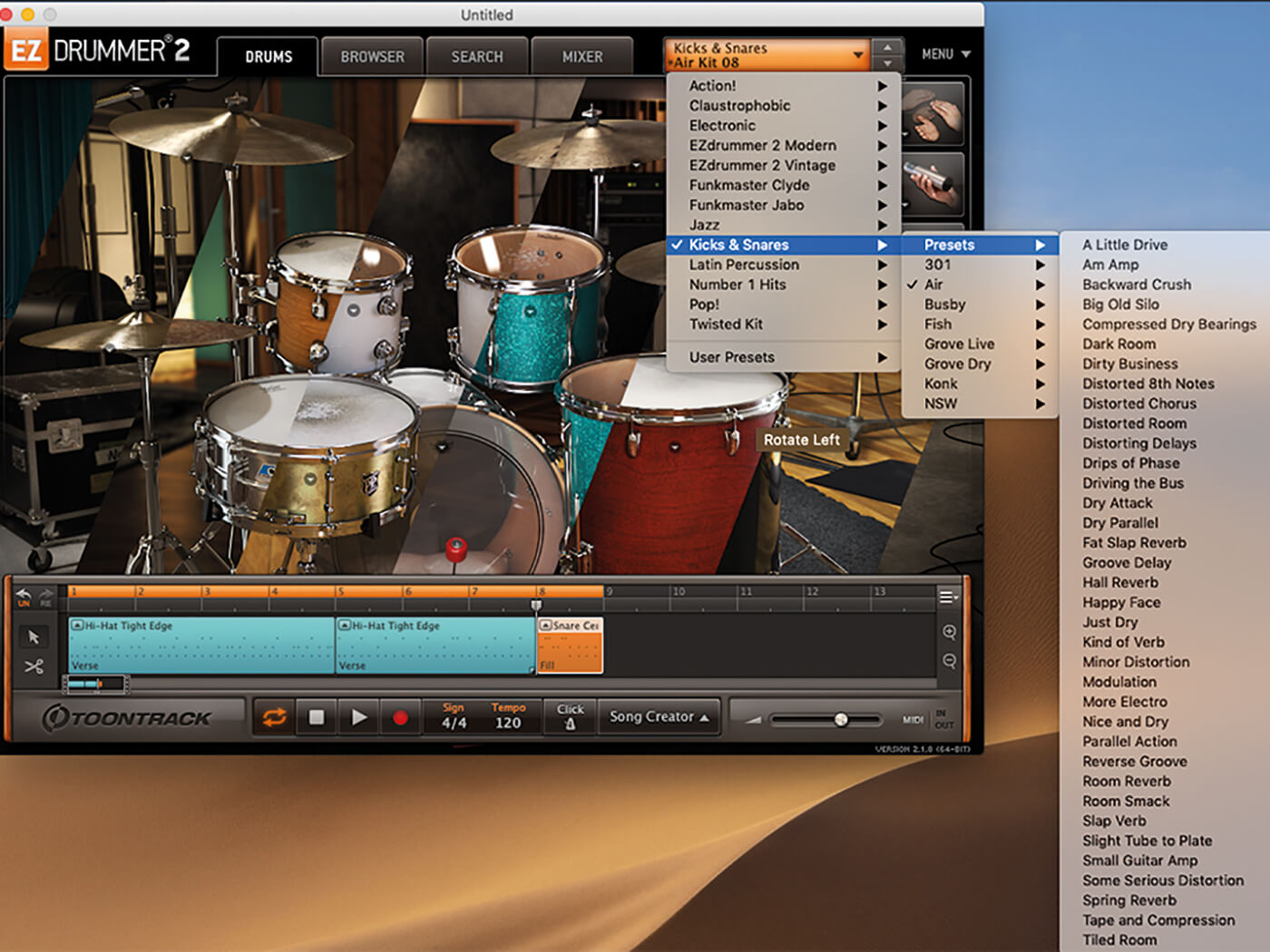 In contrast to the beautifully dry acoustics of the AIR recordings, Sydney’s studio 301 offers a stunning, more reverberant sound, replete with lush mid and rich high frequencies. It’s in this setting that you can best appreciate the genius in the capture of the snare resonances and the click of the kicks. If this proves too reverberant for your requirements, though, a quick trip to the mixer will again allow you to tweak things until they’re more appropriate for your needs.

Alongside the studio-bound presets, Toontrack has also collated numerous mix-derived presets, with notes in the direction of drive, EQ and room colouration. While these are all terrifically useful, I continually returned to the extensive controls within the mixer page, where creating a drum sound to accommodate my tastes soon became a tremendous pleasure.

Kicks and Snares plays nicely within the EZDrummer realm, adding further colours to the tonal palette. Where it is less generous is on the MIDI template side, which offers a rather meagre 24 new grooves – but, then, this does sit alongside the included EZDrummer MIDI content, which could easily be deployed with these samples. Given the price of this package, the cost per drum sample ratio is something of a bargain. 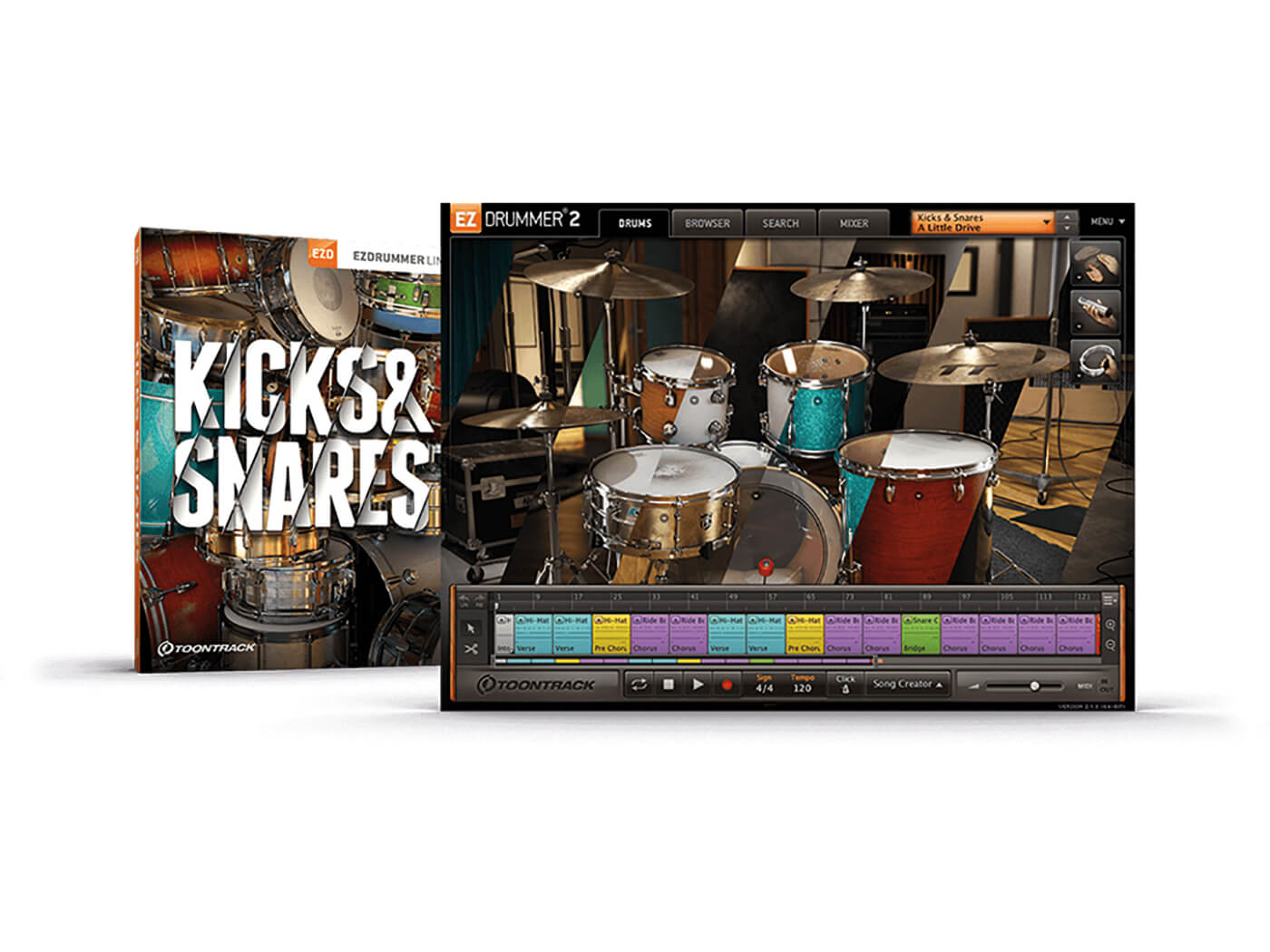 If you’re an EZDrummer user, the chances are you’ll already have your own favoured sounds but, with options as glorious as these, Kicks and Snares should certainly be a consideration. The pack provides an extraordinary wealth of content, including some lovely instruments recorded in some of the world’s most epochal studio settings. Given the price, it’s something of a bargain, and will play wonderfully alongside the regular EZ content – as long as you aren’t hoping for loads of MIDI content. 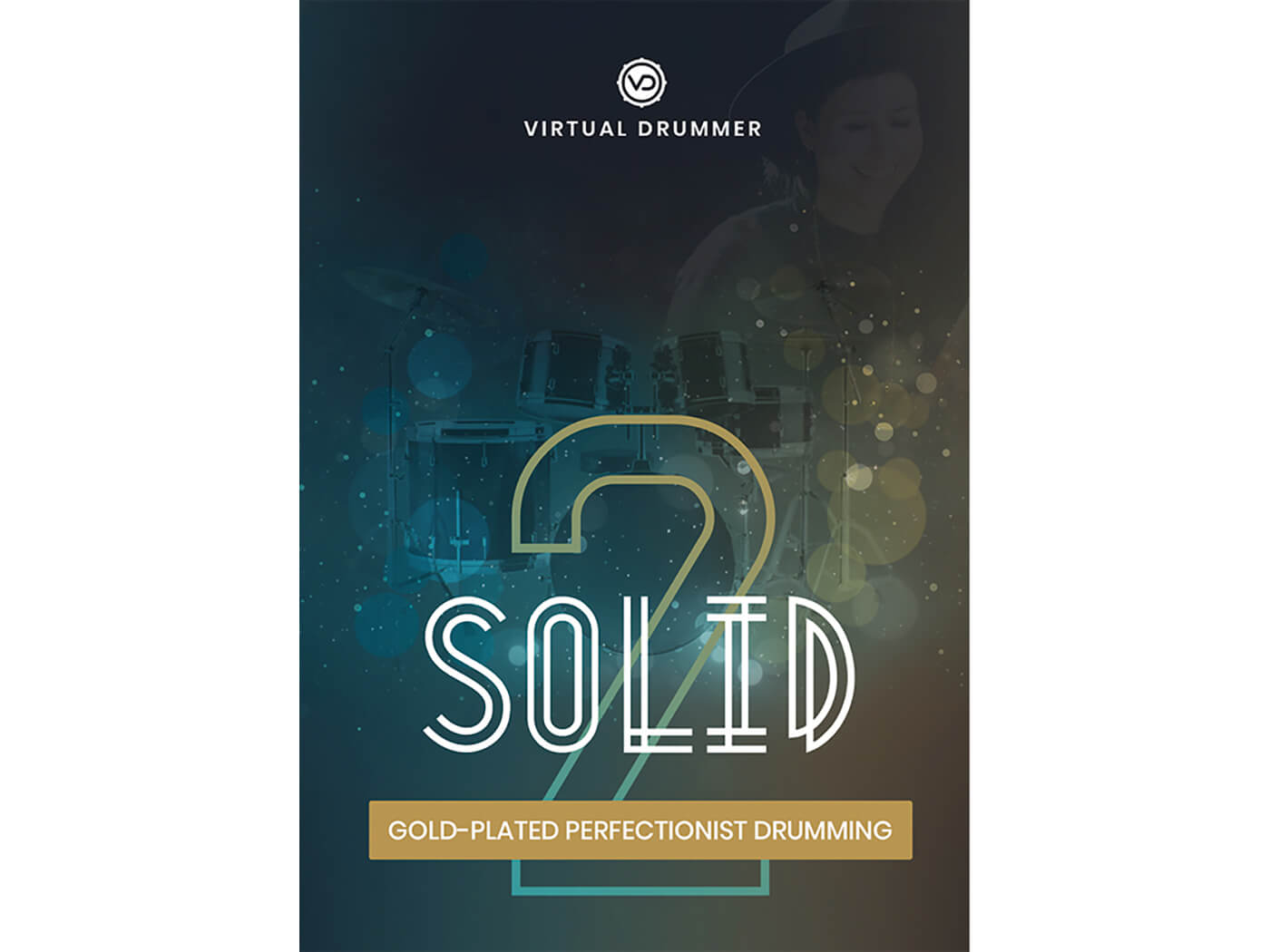 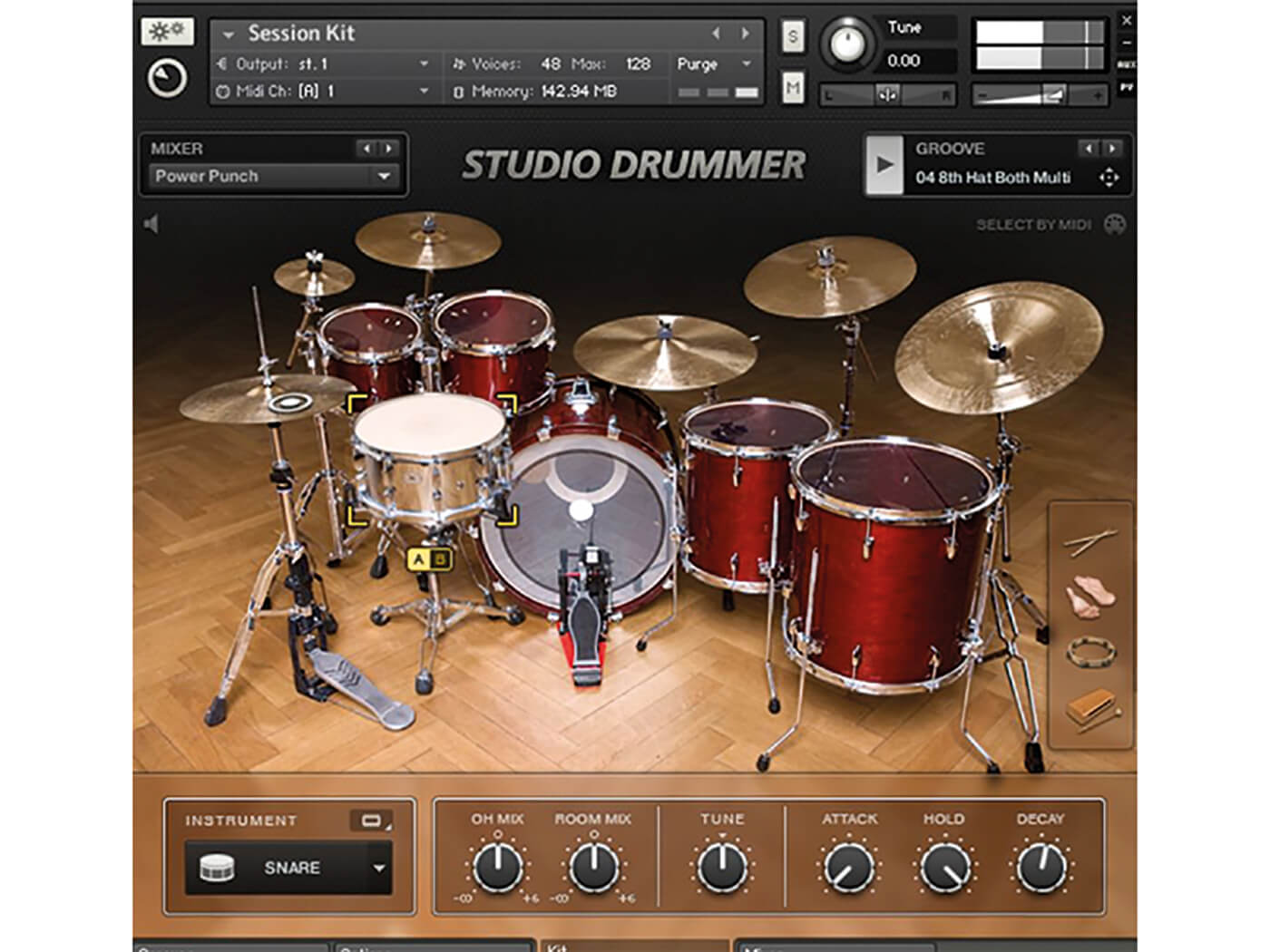 NI’s spin on the virtual drummer works within Kontakt, and features easy-to-use drums spread across three kits. Like EZDrummer, it also ships with a wealth of MIDI template and groove content.