Toolroom Academy pour years of experience into a one-knob plug-in aimed at taking the hard work out of setting up risers, downers and assorted in-track FX movements. 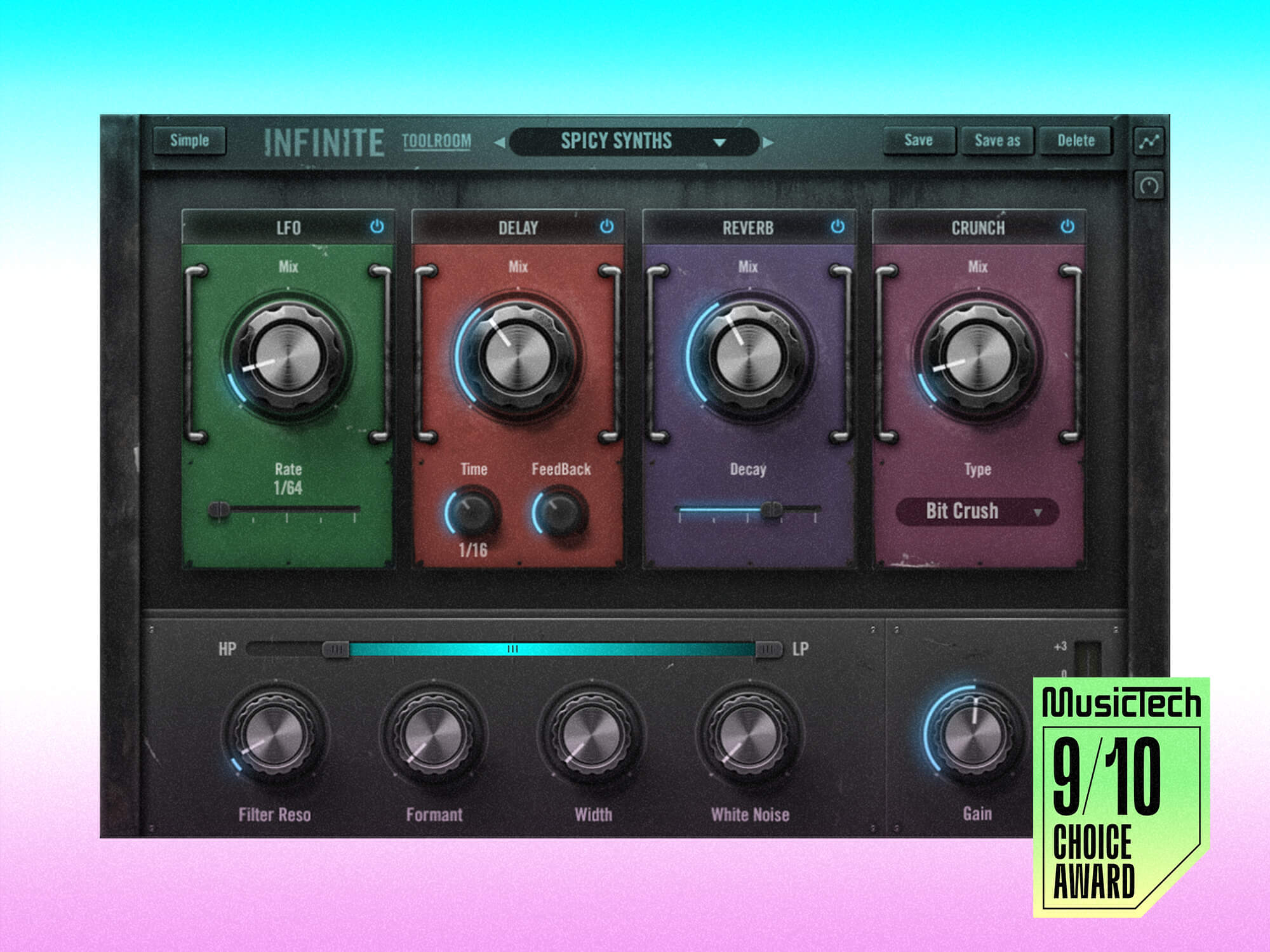 ⊖ The reverb algorithm could do with a little more variety

Music production is often a balance – or battle – between simplicity and complexity, with efficacy providing a key to creativity. Toolroom Academy is acutely aware of this and, with a nod to tools from the MXR Phase 90 to Waves’ OneKnob series, has created a single virtual potentiometer plug-in to cut down on signal chains and automation set up time.

The multi-effects process within Infinite all relates to the position of the knob, which is housed in a scalable UI that can expand and contract to the programming or performance needs of the user.

Above the big knob is the preset library, which is supplied with a well curated set of effects for downers and risers, transitions and other sound effect shots and inserts. This is the Simple side of Infinite. With a single click the knob, preset menu and I/O metering is replaced by the Complex side of the plug-in, where users will inevitably migrate when ready to get their hands (or trackpad) dirty.

In Complex mode, the user is presented with four re-orderable stompbox style effects (Delay, Crunch, Reverb and LFO) that each possess a rotary mix control and up to two parameters. These are followed by four non-moveable effects: Filter, Formant, Width and White Noise. The filter is essentially a band-pass with a dual-point slide control for lowpass and highpass frequencies, with the resonance knob sat below. The Formant filter is a separate single knob effect. These eight effects can be set up as a static insert or send effects processor, but the real trick is plugging them into the main knob and taking them for a spin. 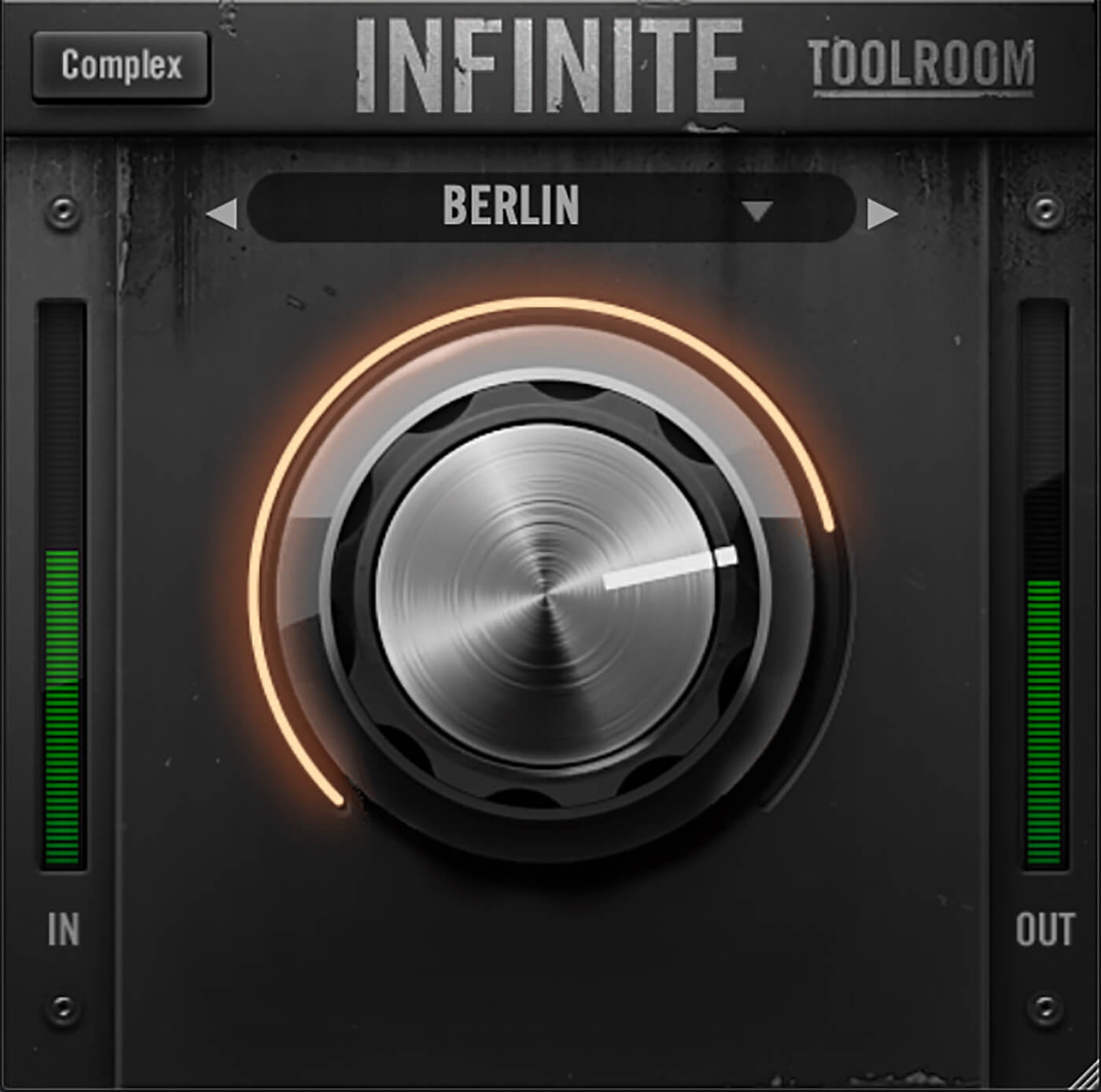 Setting up Infinite could not be easier. Next to the eight effects controls is the Macro Setup area where up to 14 effect parameters can be assigned to the main knob. For each parameter, an XY plot can be made to map their value to the knob position. The user can use spline points to custom create a curved line, taking INIFINITE beyond a mere transition tool or riser-generator into a more malleable processor.

With the knob fully counter clockwise, effects do not have to be disabled nor the affected signal dry; any effect can remain static through the knob rotation as others morph and fade. Even with just eight effects and 14 assignable parameters, Infinite is aptly named.

Assigning and mapping parameters is so simple and the UI layout so intuitive, or at least familiar, that this plug-in requires no manual; just a little time will have Infinite running smooth. And, considering its low CPU load, a pleasing number of instances can be applied across a track in a variety of roles. The main knob may be the key parameter to automate in a mix or map to an external controller, but every element within Infinite can also be automated and mapped as with any plug-in, thus expanding the range of this initially simple tool.

Ease of use may be important but audio quality is the supreme decider of any plug-in. Thankfully, Infinite boasts well-honed sonics. As with the default preset menu, the effects are curated with care and experience, which is why they can each possess so few parameters.

Joining its Mix knob, the delay effect sports time division and feedback controls that cover the bases needed without straying into wild self-oscillation, or being too rhythmically limited. The reverb module is quite restrictive with a single decay control, though this can run from short early reflection style to full blown washed-out diffusion. A couple of variations in the algorithm wouldn’t go amiss here, but moving it before/after the Crunch, Delay and LFO modules can make the world of difference. 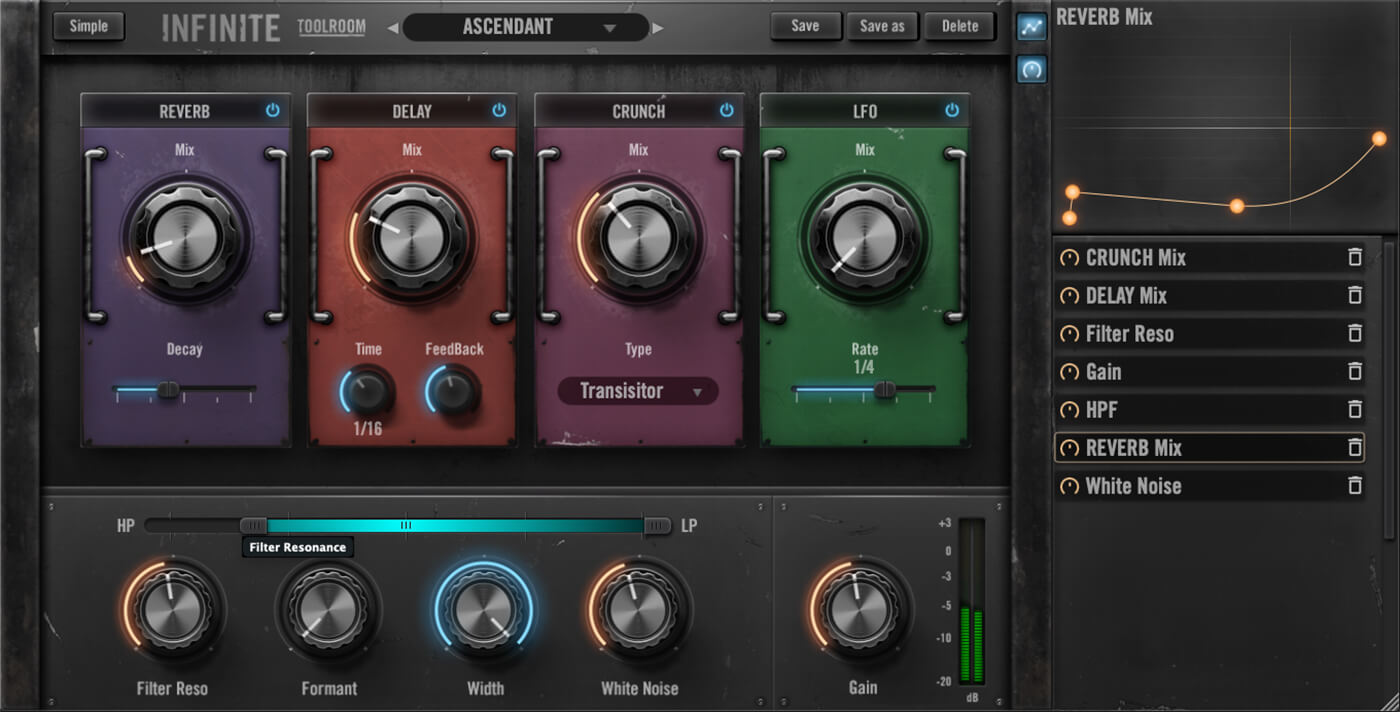 The Crunch module offers three distortion variants: bitcrush, transistor and tape. While the latter two appear to have a stable saturation with the Mix knob varying the amount, the bitcrush option changes in character as Mix is cranked up. The combined bit depth and sample rate shifting is ideal for many riser/downer situations. The transistor and tape saturations work well across most sources on their own, but in series with delay, reverb and LFO they provide a lot more quality than their lack of parameters would suggest.

The LFO modulates amplitude with tempo sync, from 1/1 to 1/64. The sine/triangle waveform suits pads, leads and vocals but won’t provide the instant cut that can aid drum and bass transitions. If there was an addition here some form of ramp waveform would be a useful addition, but hardly vital.

Having ordered the four primary modules to taste, there is still plenty of room left for sound sculpting with the filter, formant, stereo width and white noise effects that follow. The latter is a source of its own that is injected at the front of the effects chain and can be used to create risers and downers without a passing signal, if necessary. The filter may lack the usual slope and knee controls but it never feels lacking in operation, and the filter resonance knob brings just enough ring for effective transitions. The Formant filter roams from ‘aye’ to ‘ee’ vowel sounds, bringing enough character to be useful without ever straying into vocoder-esque hinterlands, which may or not please you.

The Width control is the least exciting thing on offer but, when rolled into a transition Macro the shift from mono to stereo (or vice versa), is always a dramatic must-have. The white noise knob on the end is an essential within the Macro and will spice up any mix movement, especially as it comes with its own subtle low-pass filter knee shift as the control is rolled clockwise.

There are many ways to deploy Infinite to your advantage across instruments, group buses, effects sends and the mix bus, whether mixing, remixing or performing. And, with its deceptive simplicity a personal library of transition tools, it can be built up to make short work of what often involves using multiple plug-ins, loading presets or programming new settings. Along with its low CPU load, Infinite appears rock solid in performance, rendering it a multi-effect processor that can be relied upon. Its value for money is undeniable when considering its ease of use, effect quality, flexibility and efficacy. 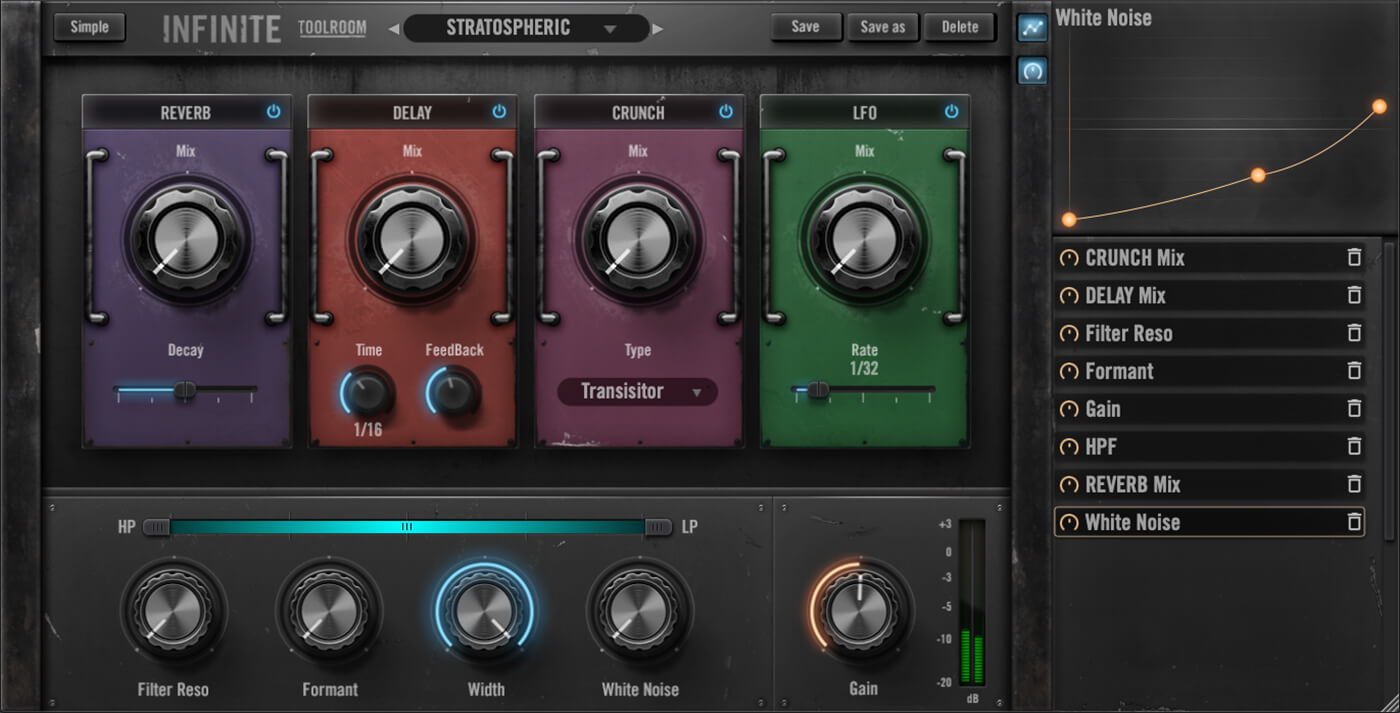