Finding the right cinematic sounds for your next project could catapult your music to the first division. We avoid relegation by booking a place in the Premier league. 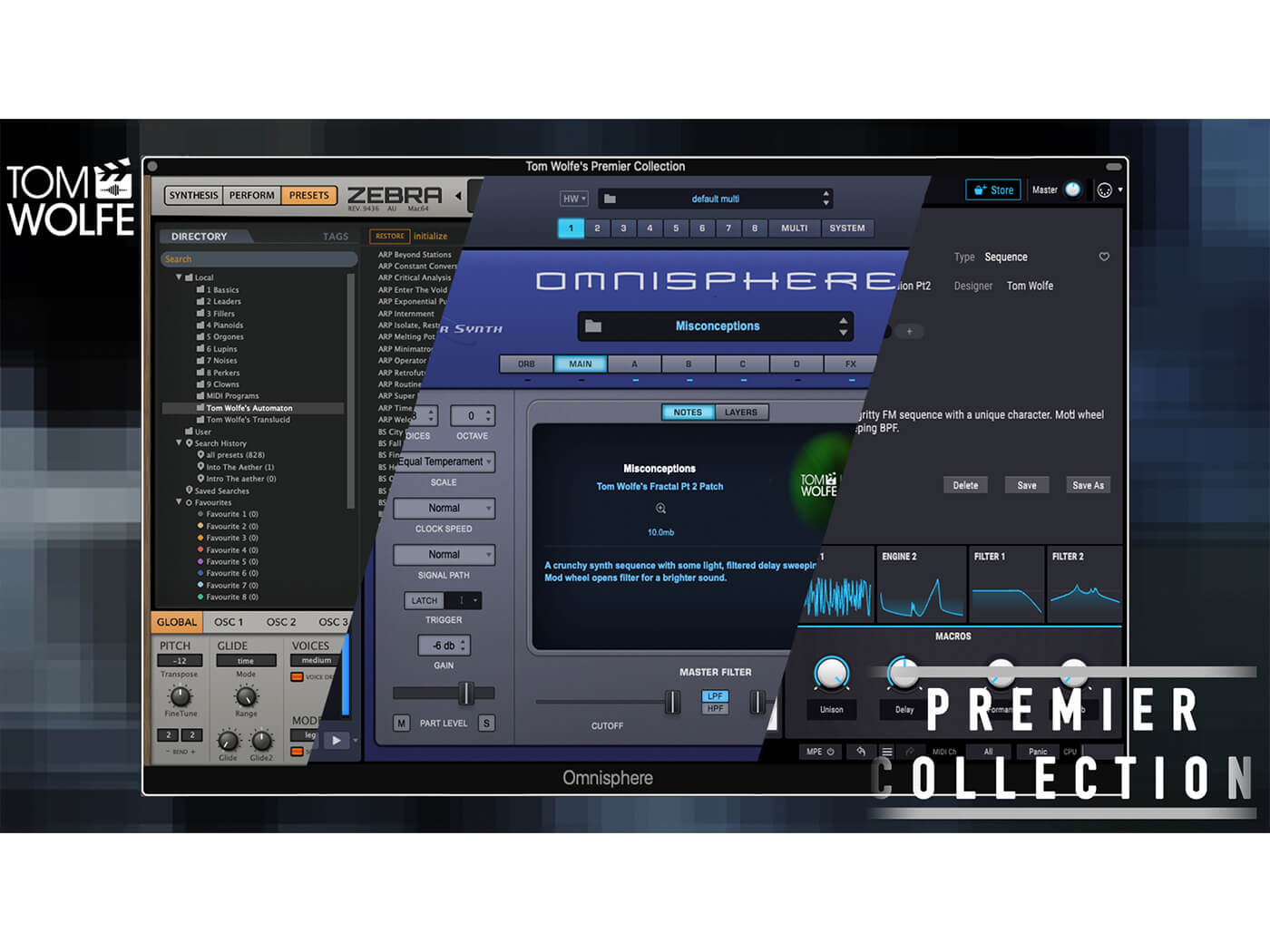 Even as computer-bound synths display ever-more ingenious ways to generate appealing sounds, we often find ourselves returning to our favourite presets. There’s nothing wrong with that. Many new and exciting synths offer such complexity in modulation and real-time performance that reaching for them and having to programme sounds might interrupt our creative flow. Nowhere does this problem chime greater than in the land of media composition, where turnaround times necessitate speedy workflows and production techniques. It’s helpful, then, to have useful resources on hand in the shape of patches designed for cinematic and televisual deployment. Enter Tom Wolfe, who has a foot in both camps. As a composer for media projects and a programmer of some of the finest soft synths on the market. 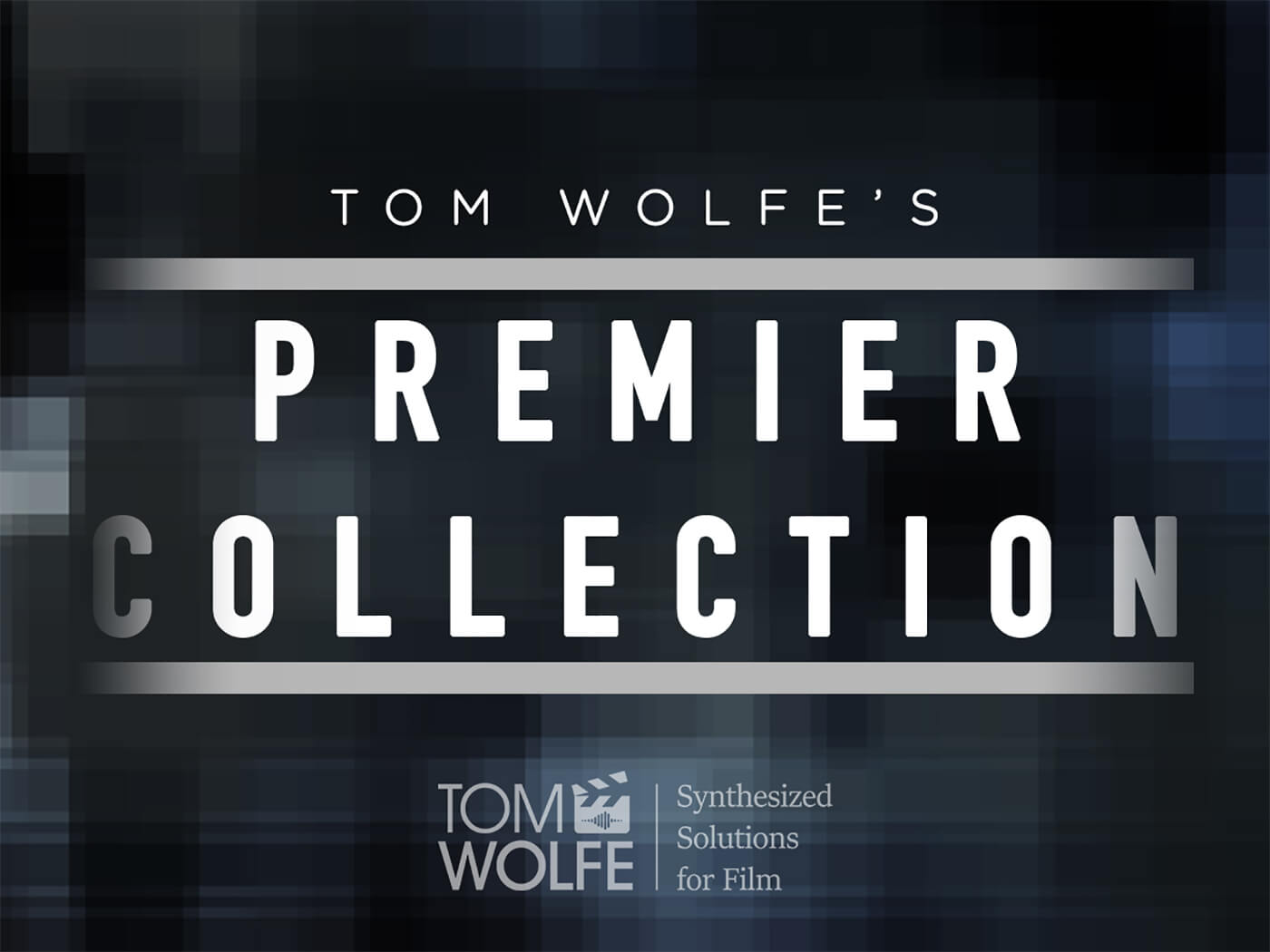 The Premier Collection is an enticing package of synth patches created by Wolfe. With their overall cinematic leanings, the patches are broken down into sections, each with its own genre. The collection comprises 1,600 patches for three media-related products, which you will need to use this suite. You’ll also need to be relatively up to date with software.

The largest portion of the Premier Collection content is geared towards Spectrasonics Omnisphere (v2.6). There are 1,000 patches here to add to the Omnisphere library, represented across nine cinematic styles. One of the most recent additions to Wolfe’s line-up is Lunnen, inspired by British television and independent drama. The patches are concisely categorised, with everything from understated pad-like tones to arpeggiated and pulse-driven sounds. On the whole, they provide an excellent backdrop and a beautiful sense of movement. One such patch, Analog Angels, slowly sweeps while meandering across the stereo field, in part thanks to the use of Omnisphere’s excellent effects integration.

Similarly, Crushed Air has kindred credentials but with more space around the tonal centre, with elements of bitcrushing on the reverb. There’s a healthy contingent of pulse-driven content, too, with clicks, kicks, pulses and arpeggiation. It’s the perfect patch set for creating underscored anticipation. 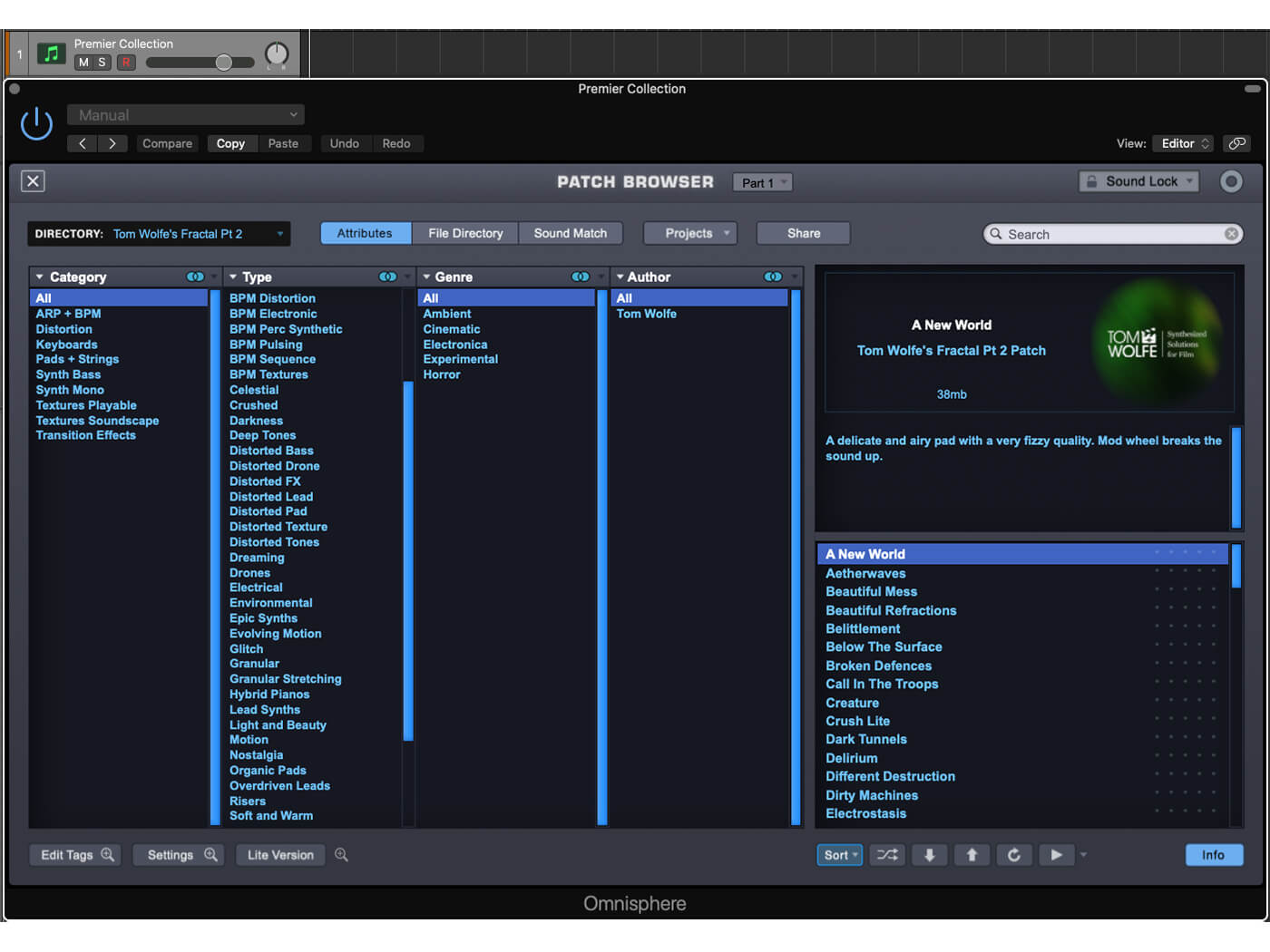 From understated to industrial, Fractal Parts 1 and 2 is designed for darker cinematic scoring. Again, this is a fantastic collection for a broad cross-section of uses. The One More Generation patch’s distorted elegance invites further composer-driven control. You can programme its semi-filtered, industrially distorted tone to build and subside over time.

The 300 Halcyon patches demonstrate more ambient tendencies. The opening salvo of the 20000 Leagues patch shimmers beautifully, perfect for reflecting shafts of light as though scoring an underwater section of film, for example. Being more ambient in design, some of the patches can take a while to unravel. In many cases, this is more than simple amplitude attack. As with any good patch though, they’re easy to adjust.

Some of the patches in this sizable collection excite immediately. Others are what you might call rainy-day sounds – you know what they are and what they do but you’re not going to use them all the time. And that’s fine, as some of these sounds are so impressive that using them continually would cheapen their currency. The brooding End of Existence patch, which forms part of the sci-fi-inspired Oblivion suite, for example, exhibits such impressive low-end coupled with pulsing upper-mid colour that you’ll want to save it for something special. Your musical cue will thank you when it finally makes its entrance.

In addition to these patch categories, Atmos, Dystopia and Ares provide yet more screen-ready content, and boast their own modern twists and vintage stylings. 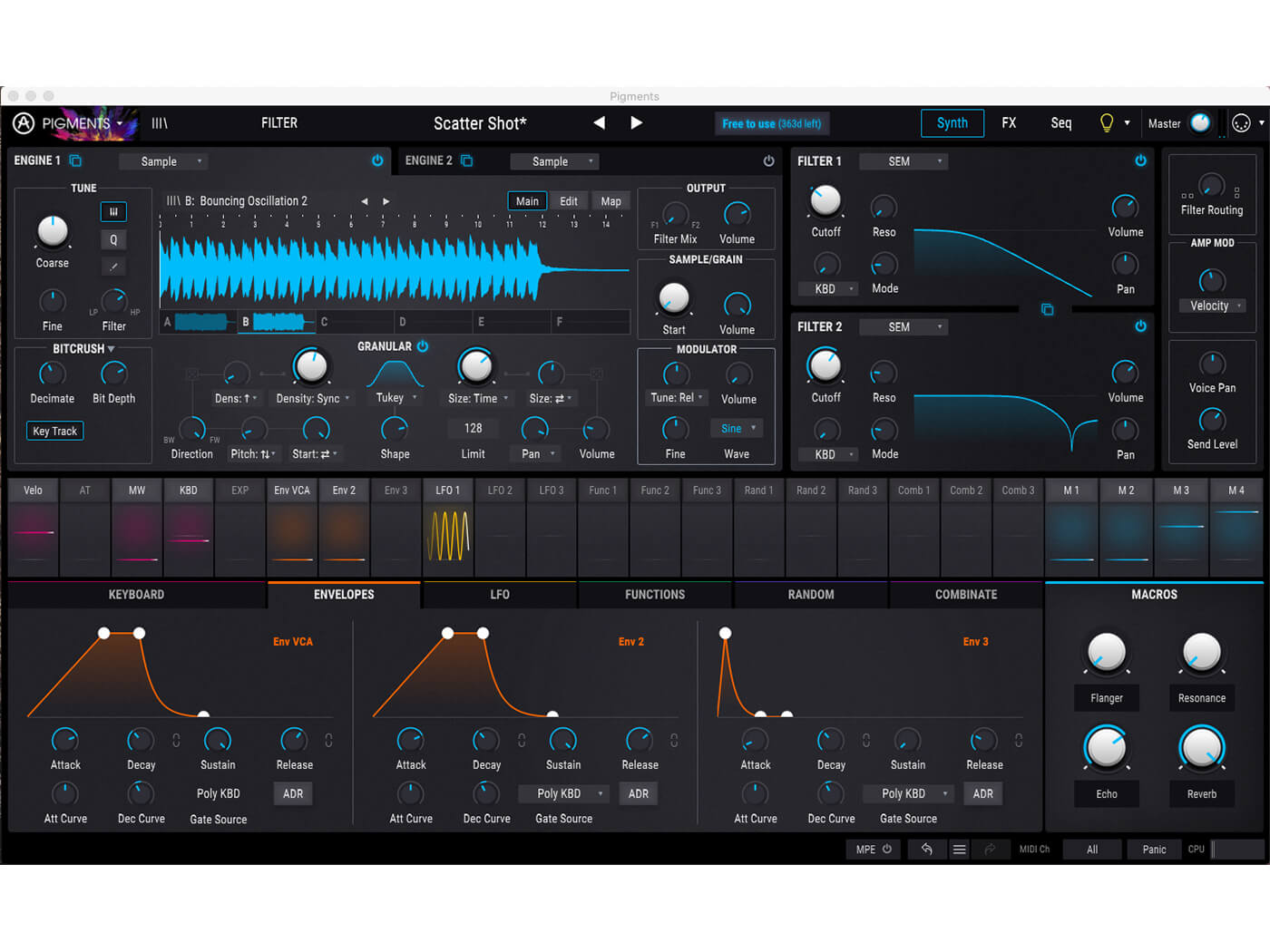 Now in its second version, Arturia’s versatile Pigments soft-synth has already garnered a considerable following. The Premier Collection makes fine use of Pigments’ ability to create complex modulations with a further 400 patches for its library, bespoke wavetables included. The Recapture patch set, for example, features 100 hyper-real patches that include pads, drones, basses and leads, as well as pulse and sequence-derived elements. Basic patches, such as Recoil, provide pulsing bass while allowing for further manipulation via your DAW, MIDI CC or MPE. It’s nice that there’s an option to induce wave-folding and filter sweeping to further invoke builds and drops too. More complex patches, such as Scatter Shot, make use of Pigments’ potential for sample and granular-based synthesis, bolstered by the backend effects for delay and reverberation.

The Premier Collection also features 200 patches for U-He’s Zebra 2. The Translucid pack provides beautiful ambient patches, while Automaton veers into the realm of robot-style presets inspired by such scores as Daft Punk’s Tron: Legacy. There are plenty of sequenced and pulse-derived patches here, with sync and overdrive elements for angst and colour. These complement the electronic chordal constructs brilliantly and are a marked contrast to the calmer offerings of the Translucid patch set. 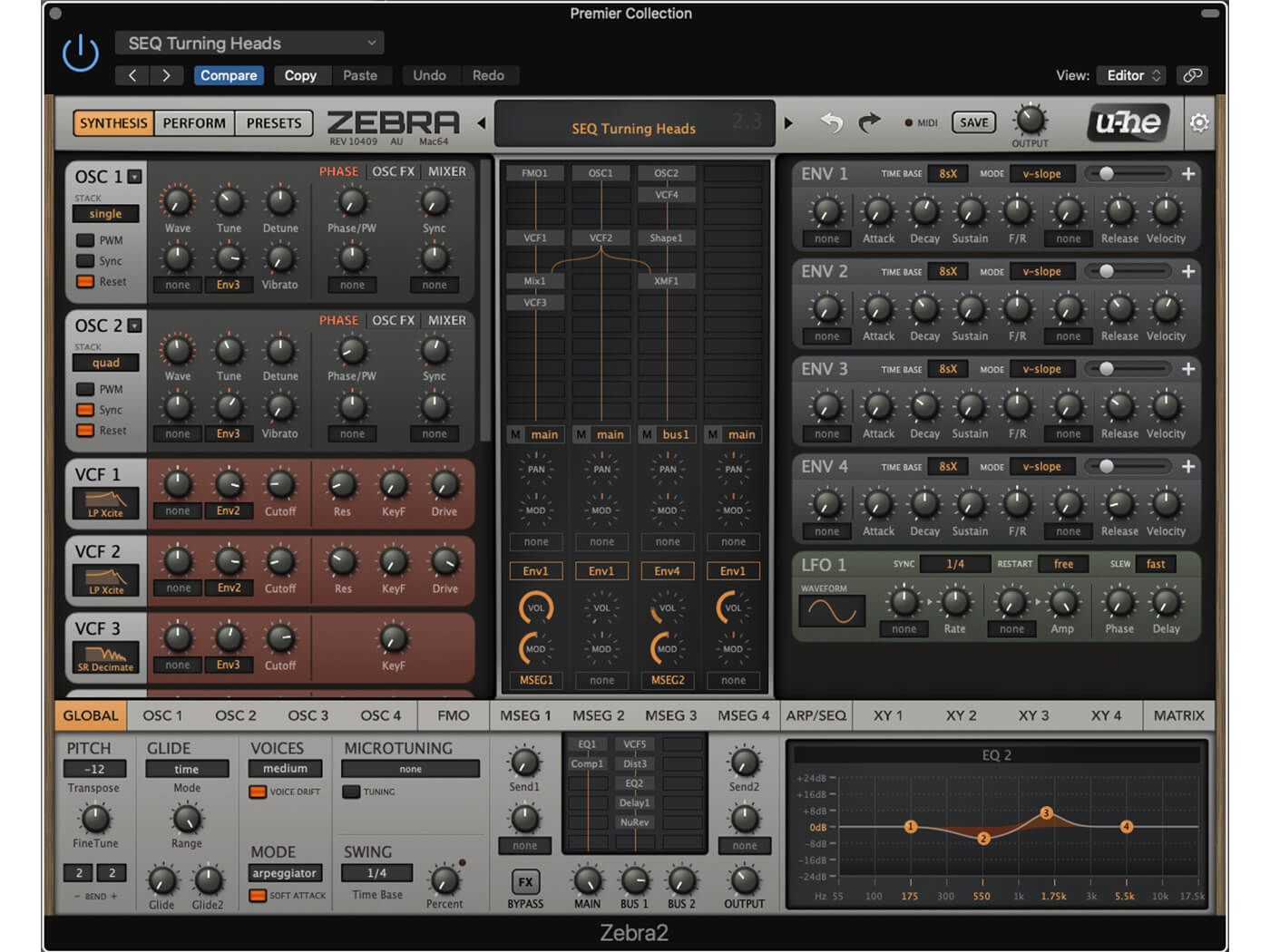 As fans of all three synth engines, this collection is a nice reminder that they’re all capable of sounding remarkably different. Applying additional content to these industry die-hards will undoubtedly rejuvenate them. The Premier Collection is unashamedly cinematic by design but extends these themes through its core. There is some repetition across the patch list but the wealth of inspirational content makes it all worthwhile. Which patch sets you prefer might come down to which synth engine you favour. But each has its strengths, with little in the way of weaknesses.