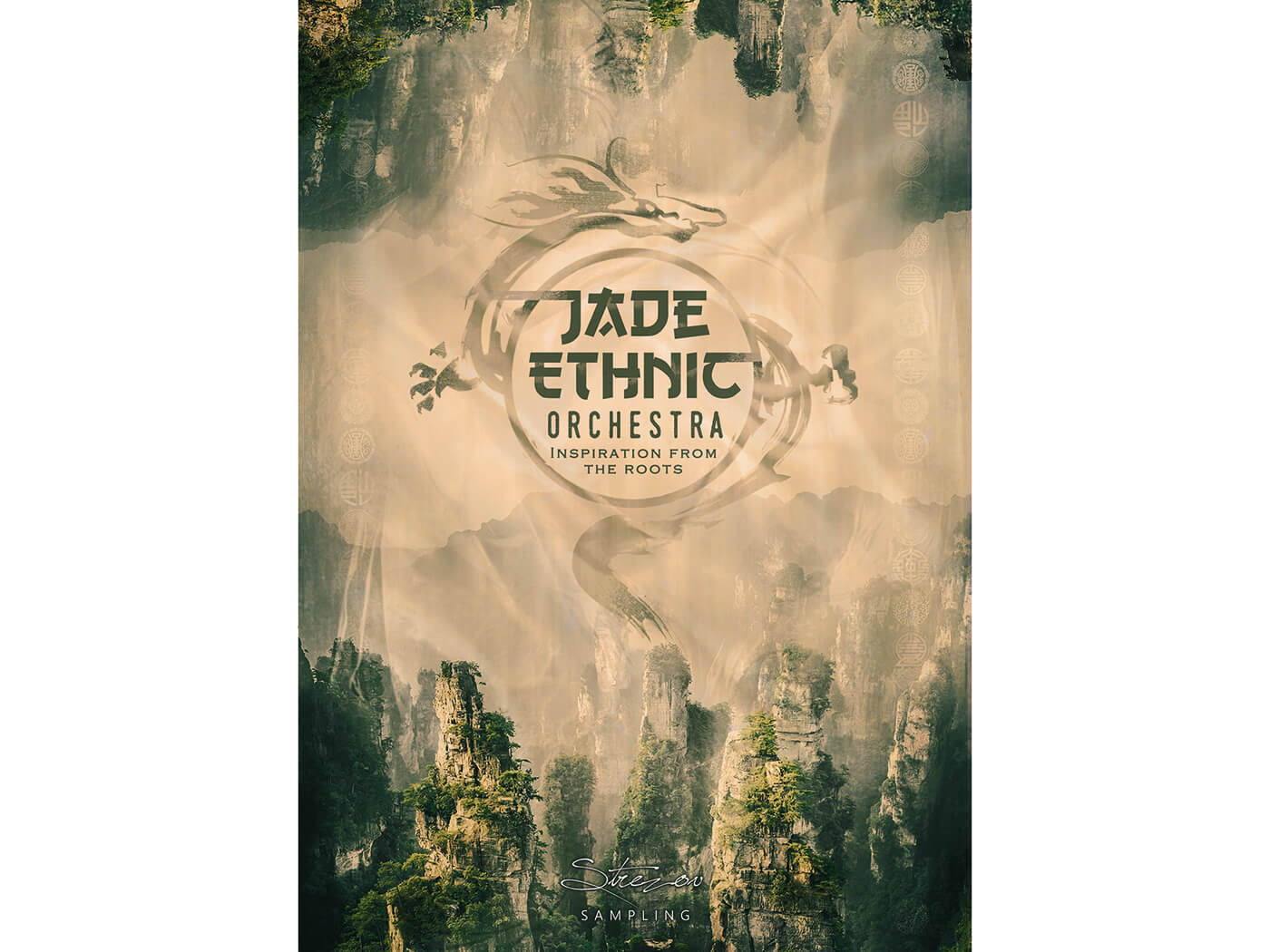 Traditional orchestral instrumentation in the Far East is very different to that of the western canon. Its palette is likely to prove unusual to those used to the more commonplace orchestral colours found in western orchestration and pop-culture. It may seem counter-intuitive but, to imbue your productions with Chinese and Mongolian flavours, you may first want to turn to Bulgaria, as Sofia-based soundtrack specialist Strezov Sampling has created a compelling new package with authentic eastern pedigree.

Packed with more than 50 traditional eastern instruments, including the suona, the shakuhachi and the erhu, Strezov’s Jade Ethnic Orchestra is a concise but well-curated library. Sample capture took place in Beijing, with Strezov enlisting some of the region’s finest musicians, including China-based composer and multi-instrumentalist Seth Tsui, to help render the more than 200 articulations. 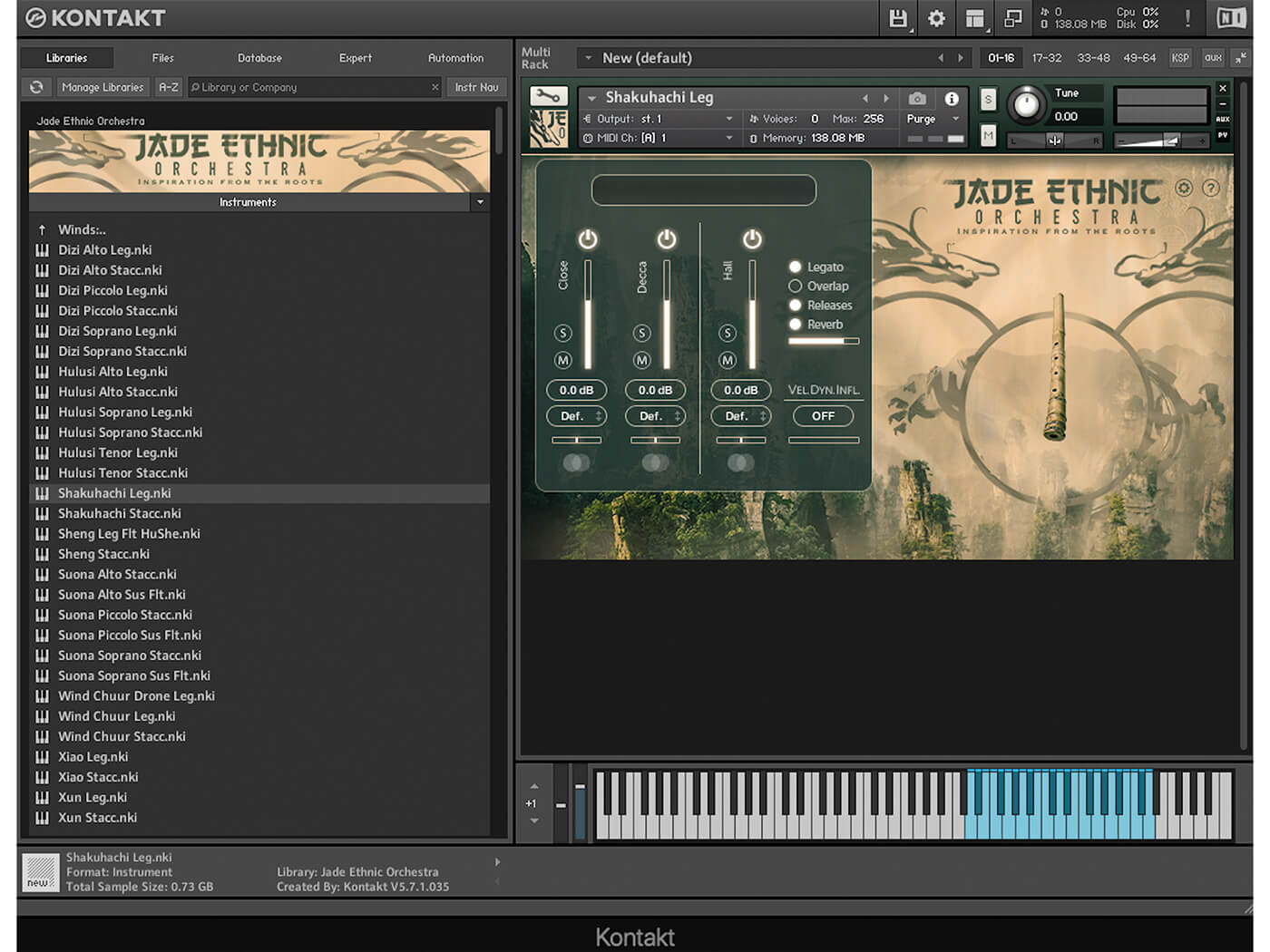 Many of us will be familiar with these sounds themselves but may lack a little knowledge when it comes to the instruments’ names. Thankfully, Jade breaks down the instrumentation into groups of bowed and plucked strings, voices, winds and percussion.

Dynamic layering is available in all cases, controlled via the usual modulation wheel assignment (MIDI CC1), which can also be redeployed to a physical fader. The shorter samples offer multiple round-robins to avoid any obvious sense of repetition, while the longer samples are available in both polyphonic or mono-legato forms. Strezov’s recent libraries have featured polyphonic legato, which is also present in Jade. The clever technology behind this process allows intelligent polyphonic processing, resulting in a convincing sense of legato from one note to the next when playing chords.

The stringed instruments come in three categories: bowed strings, plucked strings and solo strings. In the bowed ensemble instrumental selection, there are four instruments, arranged from low to higher-pitched registers. Though there are obvious sonic connections, each of these instruments benefits from a distinct purity of tone.

Case in point, the erhu is a two-stringed bowed instrument played in the upright position. It’s represented here in two ensemble patch settings, with the second offering a more agitated variant and with greater dynamic range.

This is also a good place to experiment with the polyphonic legato settings. In essence, the legato function operates in both monophonic and polyphonic modes, with the latter being a considerable time-saver if you’re playing chords. The switch between the two modes is made via a radio button labelled Overlap.

Deactivating this invokes mono legato mode, which in this setting offers an extraordinary expressiveness while in play. With the available dynamic control working alongside the exceptional legato programming, you can achieve highly believable results easily. The lower dynamic range reduces the vibrato to a modest undulation, which can easily rip to a heightened crescendo with a natural release phase, sealing the authenticity of the sample perfectly.

The sustained erhus offer both a regular and tremolo sustain, which is keyswitchable, but it is a bit of a shame that the further staccato and pizzicato patches are not available within the same patch for keyswitching. This means that you will have to load up numerous iterations of the erhu ensemble to gain choice of all articulations, a minor gripe that’s present with other instruments in this section too. 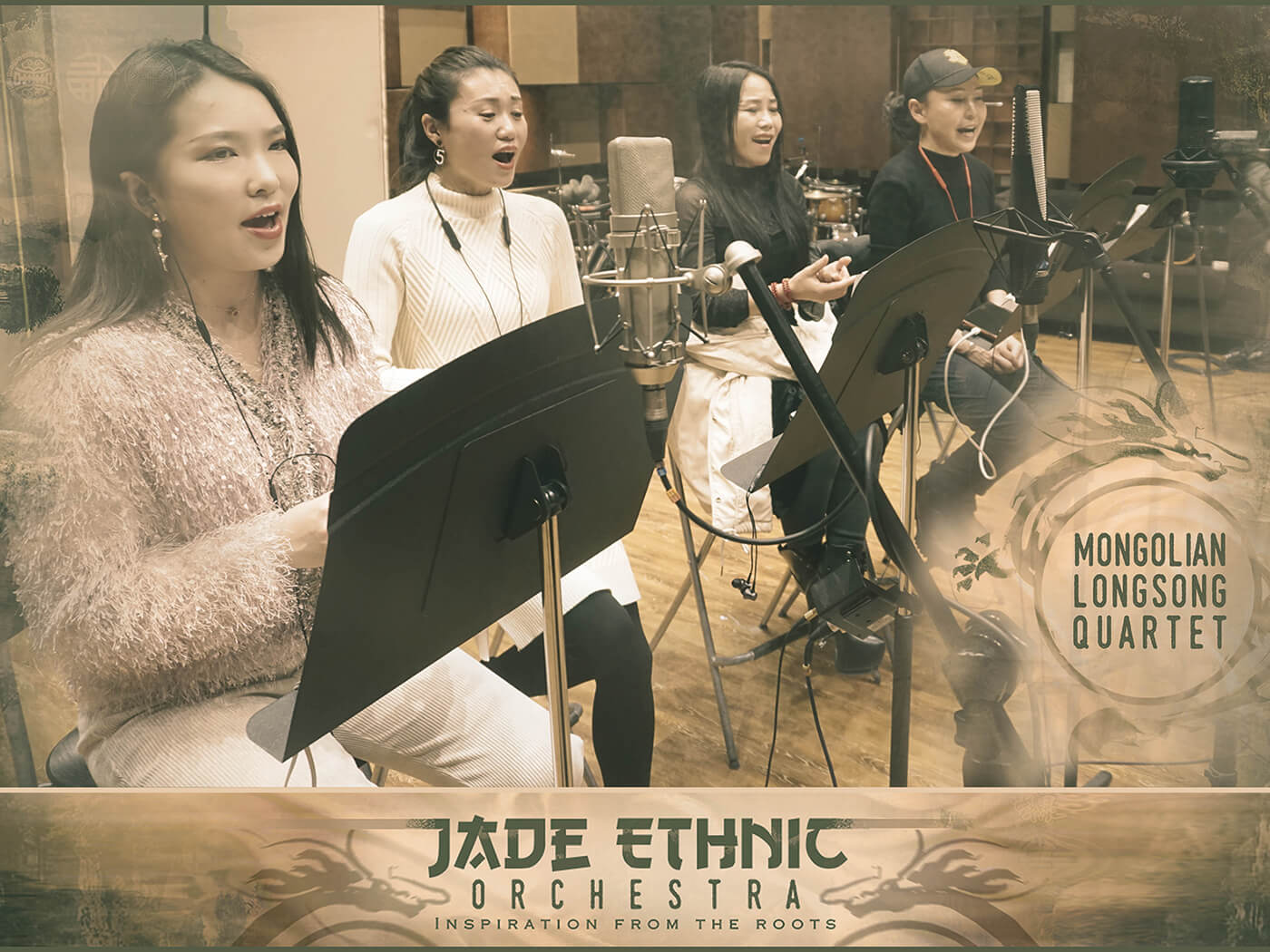 The wind instrument section offers another six traditional instruments across various pitch registers, all of which fall into categories of reed-free flute, pipe, or reed-based instrumentation. In common with the string section, legato modes are available for both polyphonic and monophonic use, while there is a similar level of detail in both articulation and dynamic control.

The shakuhachi is a recognisable instrument that was something of a darling for 1990s samplers and synths. Thankfully, the sample here is radically different from those early attempts; it’s truly authentic with much greater leanings to musical phrasing. In full flight, the programming is sublime. Lower dynamic control produces fine musical detail, such as delayed vibrato. It’s an authentic experience that glides effortlessly in both legato modes.

The suona is a raspy double-reed-based instrument that might best be employed to carry a melody as part of an ensemble. The authenticity quotient is very high yet again, with plenty of dynamic and timbral control, although it can sound overbearing to western ears.

The voices section contains the Hoomai and Mongolian Longsong choirs, both of which demonstrate interesting techniques that result in charming harmonic colours. The techniques involved in this form of vocal note production use the throat to emphasise consonants and harmonic overtones, creating unique tonal colours. In this sampled setting, Strezov has paid careful attention to the initial sample and the ability to control your chosen consonants.

The men’s Hoomai patch allows keyswitching so that you can move seamlessly from one harmonic overtone to the next in real time. Both vocal ensembles and soloists include a syllable builder, which allows you to create musically-timed chains of syllables and set each syllable to a specific note length, which in turn will sync to your DAW’s tempo. It’s smart and effective. You can save complete performance chains, making this feature a little like a vocal wavetable. 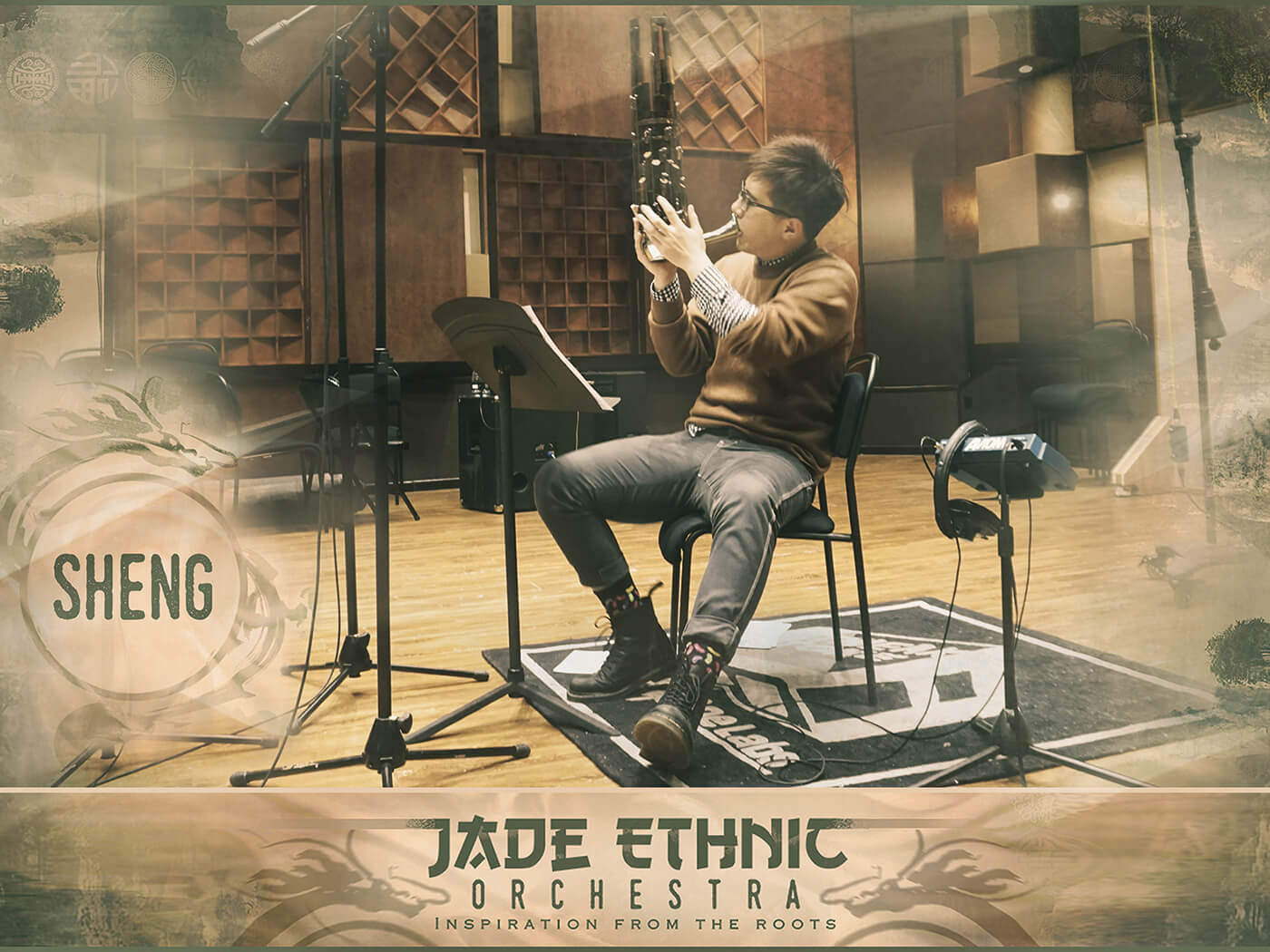 The most gratifying element of this library has to be its pads section. This collection of 50 textures, categorised in menus labelled Sci-Fi and Fantasy, has been assembled by sound designer Lyubomir Goshev. There may be no dynamic control here but that’s only due to the evolving nature of the textures, most of which are made up of an up-front attack that evolves into several instrumental elements from within the library.

These instruments fade in and out displaying phrase-like dexterity, making them perfect for a number of placements either on their own or as a backdrop for other instruments within the library. In terms of user quality, they are hugely expressive and impressive, and will chime with any workflow-conscious composers who need instant access to eastern flavours.

Jade is incredibly impressive. The initial sample content is stunning and presented with multiple mic’ing options, including close, Decca Tree and hall, all of which may be balanced individually to suit your needs. The performance capabilities of the musicians captured in Beijing gives you considerable dynamic control and allows for lots of humanistic variance, all of which adds up to create inarguably believable portrayals. The technology under the hood, which allows for easy control of legato performance in either mono or poly modes, is undeniably effective too.

This is a tightly bound product that delivers a plentiful supply of instruments from China and beyond. Equal parts high-quality musicianship and technical prowess, it may be a new market-leader for ethnic orchestral flavours. 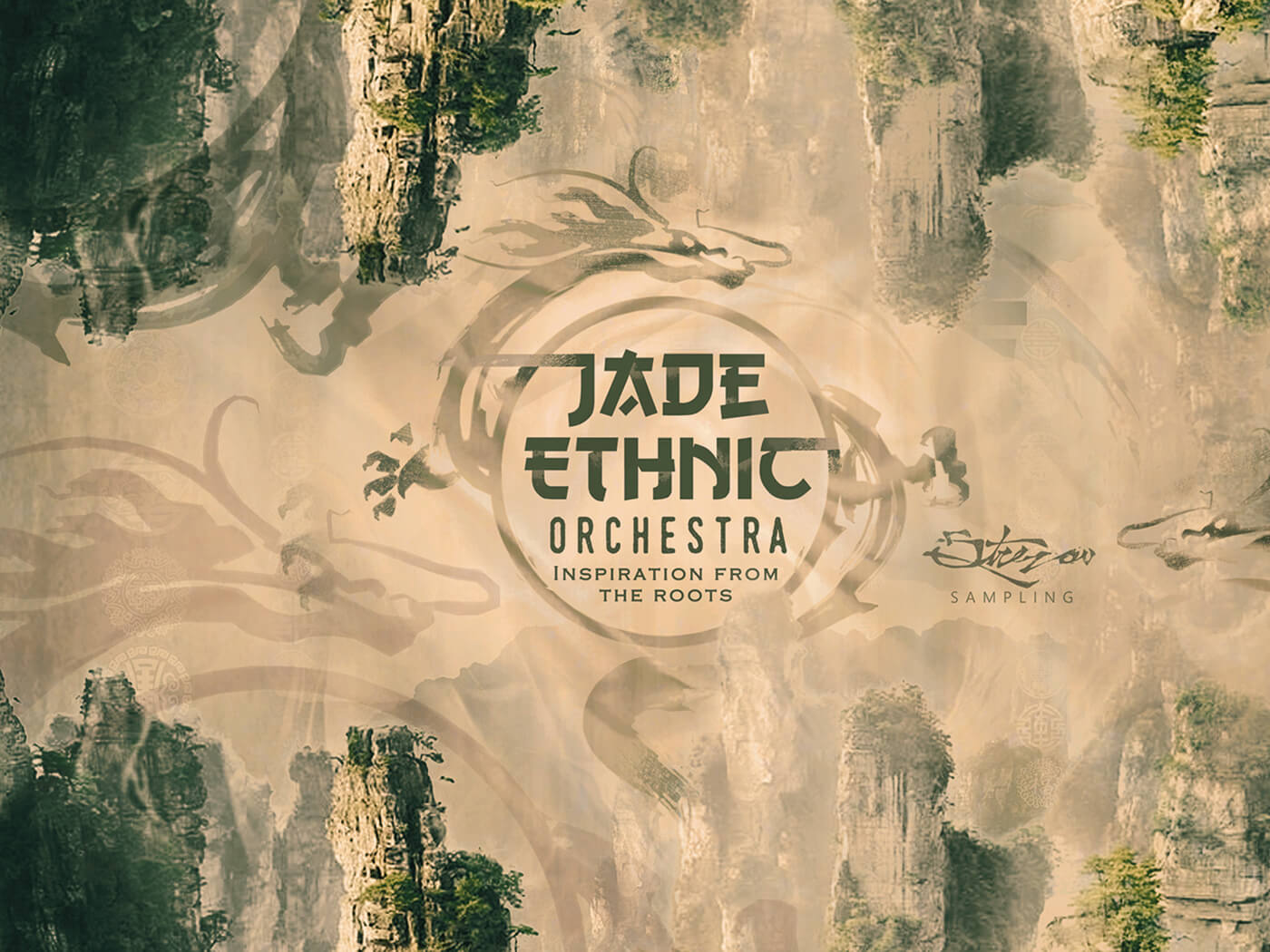 Jade Ethnic Orchestra should not be confused with any form of western orchestra. It may feature string and wind sounds but they are drawn entirely from eastern nations such as China, Mongolia and Japan, and not the western orchestral model that you’ll probably be more familiar with.

Jade’s sounds will prove hugely appealing to soundtrack composers, with its pad and percussion elements providing quick solutions. The tonal instrumental content adheres to western scales and will seamlessly blend with other libraries on a harmonic level. This package is brimming with quality content. 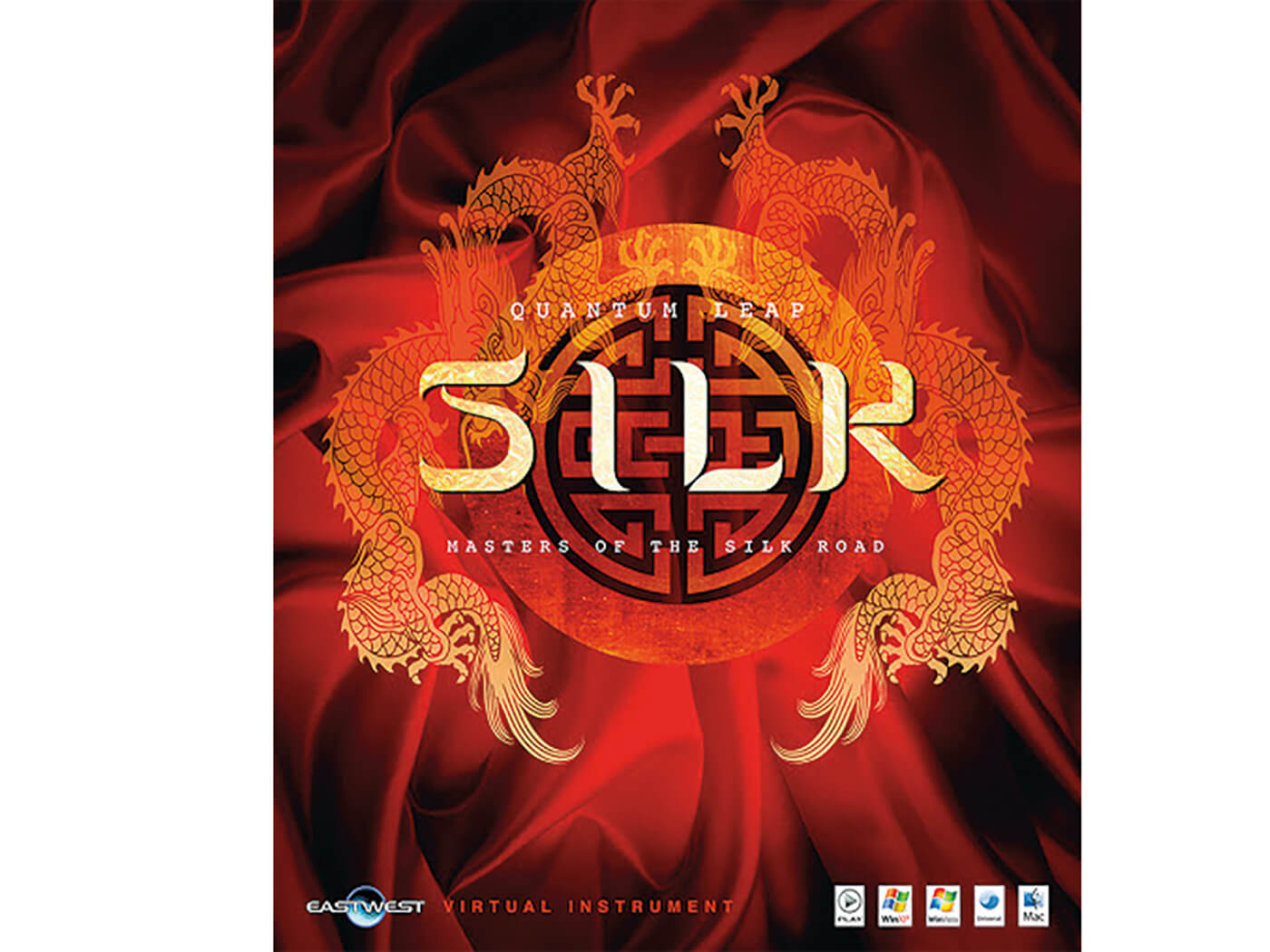 This impressive package from EastWest contains samples from China, Iran and India, presented in a format that requires the use of EW’s Play virtual instrument. It’s also available as part of the ComposerCloud package, available to rent for about £16 per month 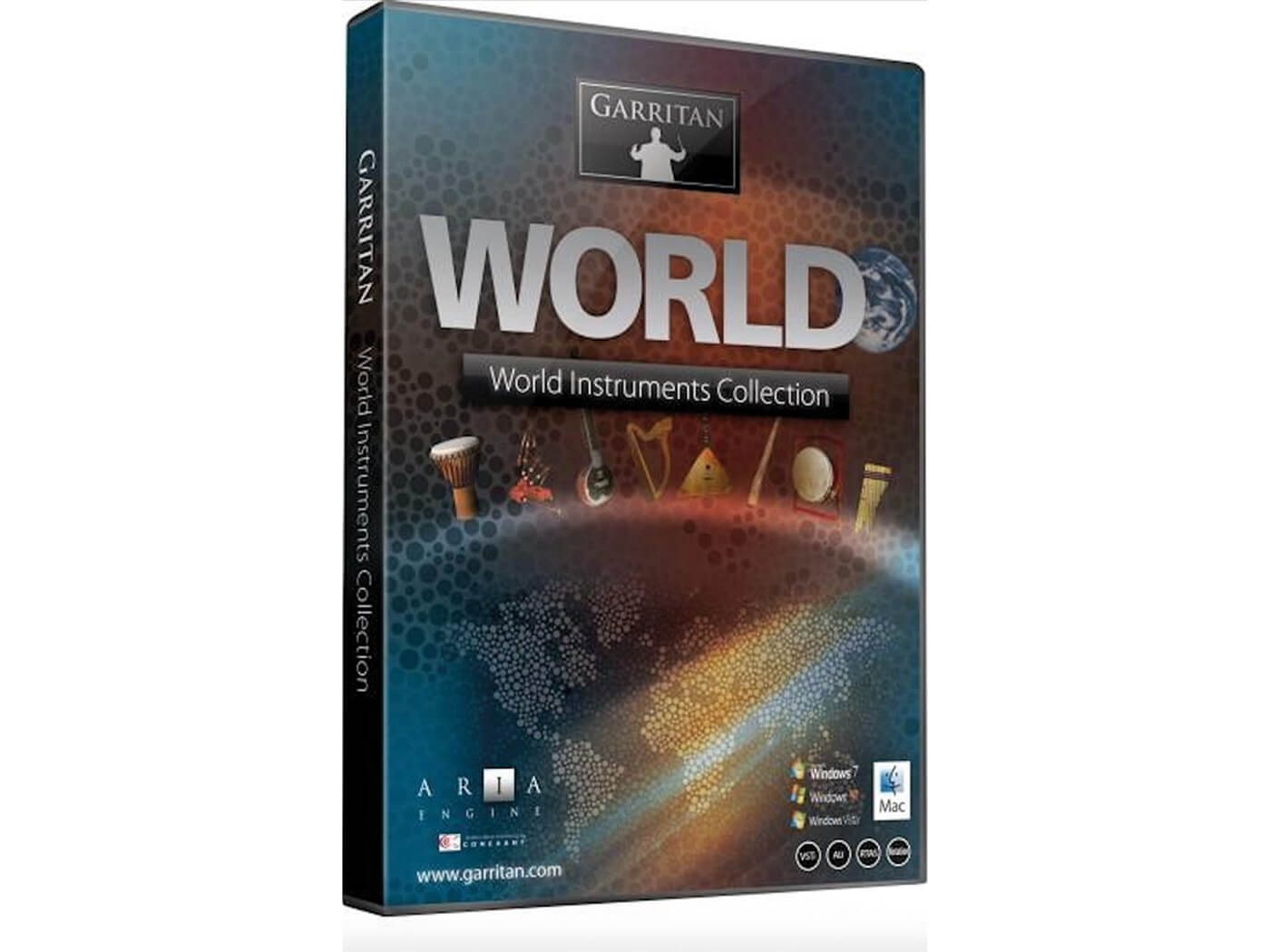 While not restricted to the East, Garritan’s World Instruments library offers 350 instruments from the Far East, Europe and the Americas. It’s a flexible bundle but lacks the expressiveness of Jade, particularly if you require more instruments of eastern origin.