Steinberg’s new audio editor may resemble an image editor, but it promises to unleash a whole host of corrective and creative possibilities… 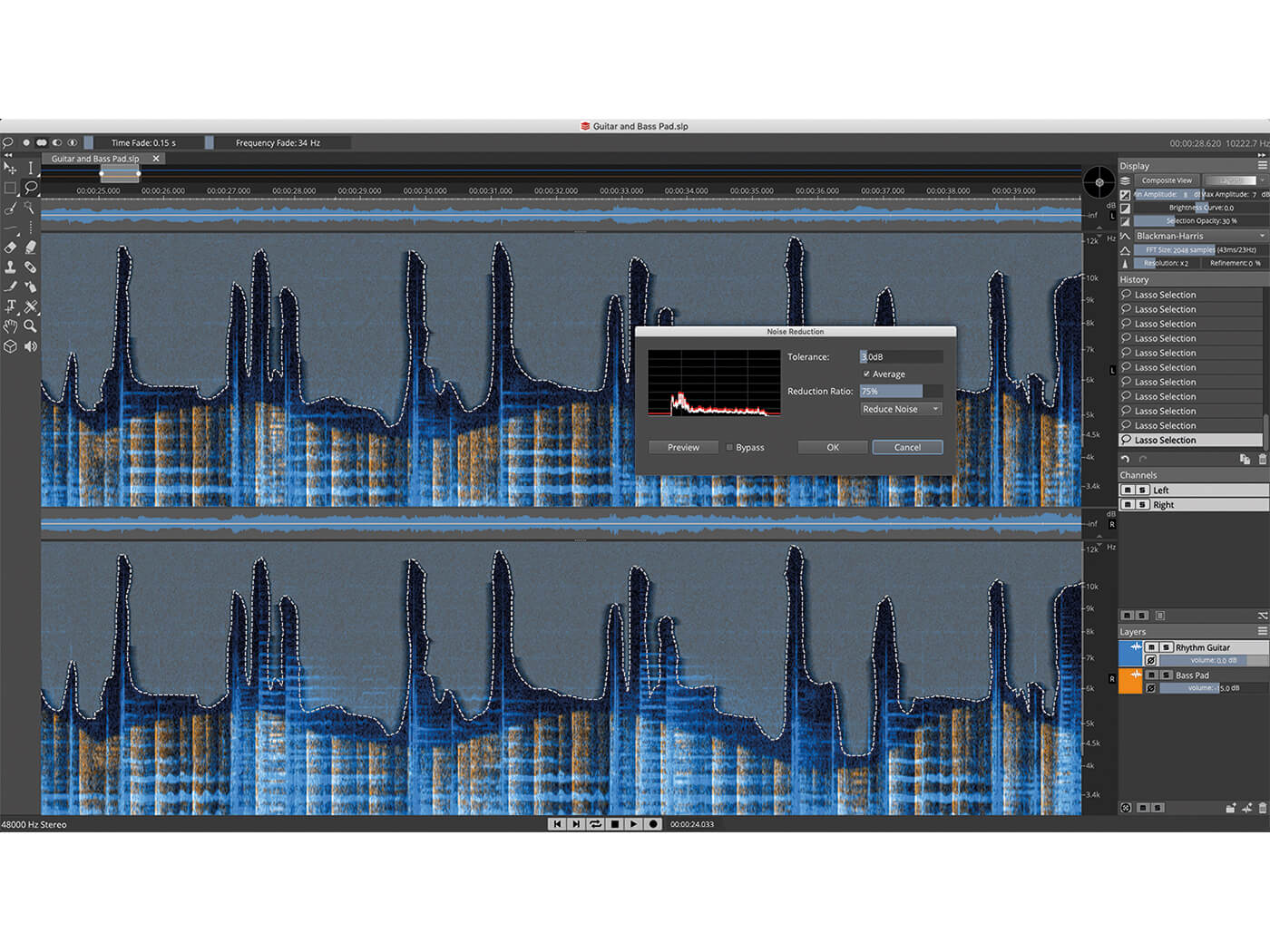 The audio waveforms that are drawn in our DAWs (and that we’re all familiar with reading, editing and generally messing around with) visualise the overall amplitude of the audio at any given point in time. In other words, the waveforms are showing the amplitude and time domains of the audio. This allows for certain kinds of editing to be performed directly on the audio waveform – cropping, editing, crossfades and so-on – but when working in the third domain, frequency, the tools are much more abstracted: you couldn’t, for example, set up an EQ by interacting directly with a conventional audio waveform.

The Holy Grail of audio editing, then, would be to work in all three domains simultaneously. This is precisely what Steinberg’s new SpectraLayers Pro 6 audio editor has been designed to do.

The SpectraLayers technology started life with Sony, which published version 1 in 2012, but it passed to Magix when it acquired the bulk of Sony’s media software a couple of years ago. Magix went on to release versions 4 and 5 of the software before the tech found yet another new home earlier this year with Steinberg. The DAW pioneer has now released version 6 for Windows and macOS.

This new version will run within any DAW that supports the ARA2 plug-in format, and has been designed to integrate particularly closely with Cubase and Nuendo, where it can replace the standard audio editor for audio parts assigned to the plug-in. SpectraLayers also comes with a standalone app that works independently of your DAW, and so doesn’t require the ARA2 support.

SpectraLayers is built around the concept of layers (the clue’s in the name!) and this is borrowed directly from the world of photo- and image- editing software, where the user copies portions of an image, or imports new image content, to a new layer in order to make modifications that don’t destroy the original underlying material. SpectraLayers’ layers serve much the same purpose, but work with sound rather than pictures. 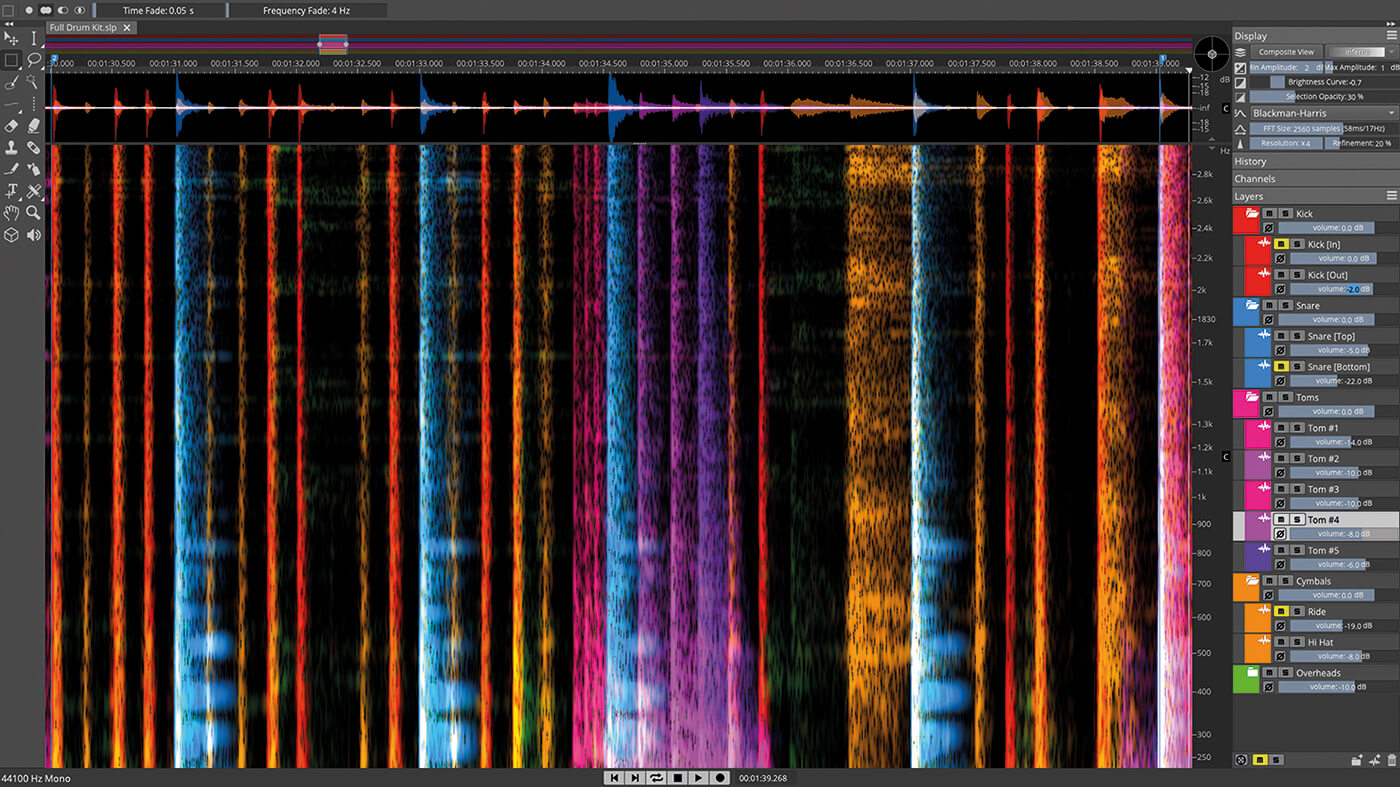 The similarity to image-editing software doesn’t end there, as the tools that you use to select, adjust and modify audio will be instantly recognisable to anybody who’s used software like Affinity Photo or Adobe Photoshop. These tools are used to select time and frequency ranges from within a sound and to then make modifications to them in any of the three audio domains: adjusting a selection’s pitch, increasing or decreasing its amplitude, and/or retiming a selection or moving it to another place in the audio altogether.

The programme window also has a distinct image-editor look to it, with a toolbar down the left side, layer and history panels at the right and a large canvas area in the middle where you do the main editing work. The difference is that with SpectraLayers you are painting with sound not colour, and your canvas is an audio FFT graph. It even works with pressure-sensitive graphics tablets.

By default, the FFT is viewed from above, so that it shows the frequency composition of the audio against a timeline, with amplitude represented by brightness. As you zoom in on this view, and start to get your eye in, you can see specific sounds and parts within the graph: vocal and other lead lines, bass and kick lines, snares – all of it! The view can also be tilted into 3D so that the amplitude information can be seen as the height of peaks in the graph. The colour scheme can be modified, too, so that the colour of the graph changes with amplitude. 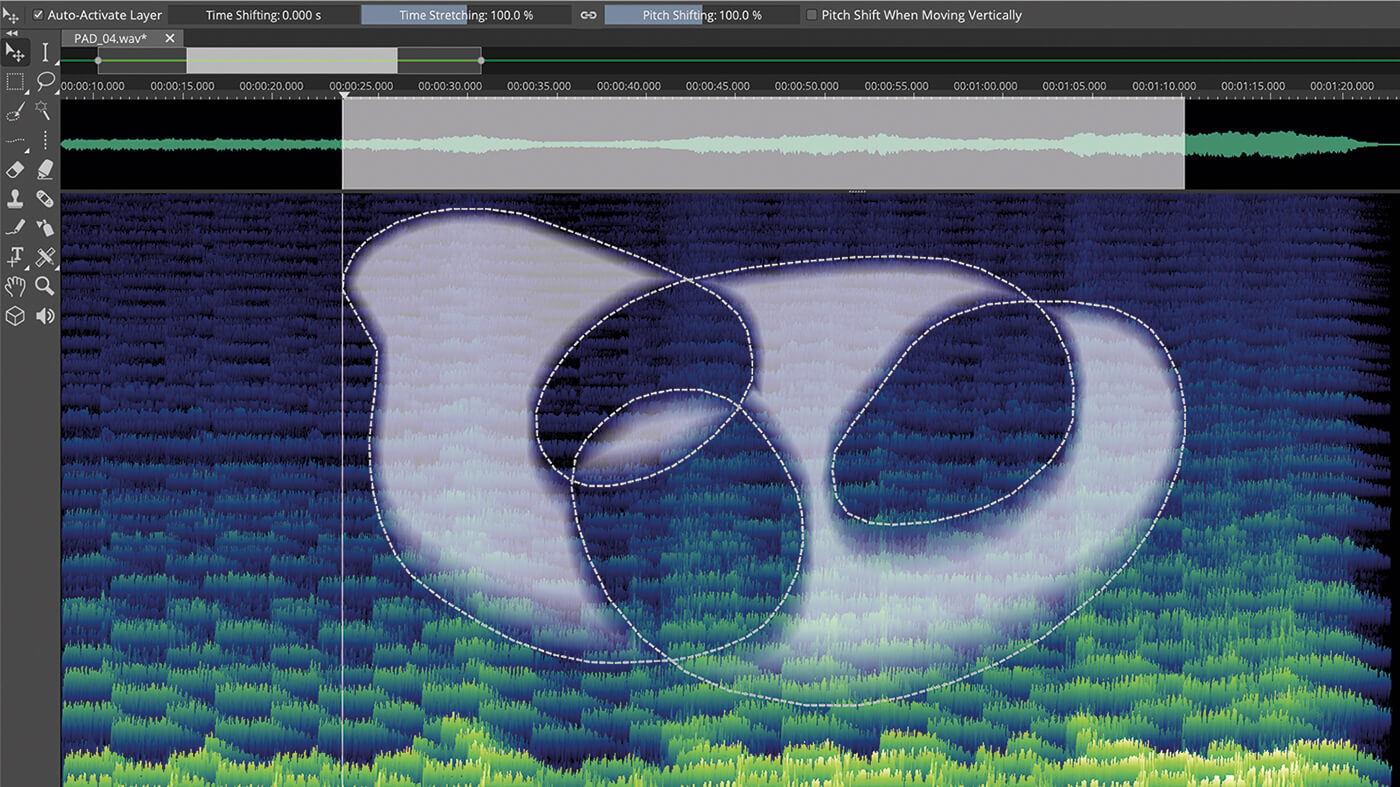 Above the FFT graph, there’s a small conventional waveform. This reflects changes that are being made, but cannot be edited directly and is simply for reference and to help when navigating within the software.

Editing in SpectraLayers typically begins by selecting an area within the FFT using the various selection tools – while not entirely necessary for all tasks, this is a good way to limit and control the frequencies and time ranges that will be affected by subsequent edits. Some of these selection tools are quite intelligent: for example, if you use the frequency-selection tool to click at the point where – say – a vocal starts in the graph and drag the tool in the time axis, the selection will attempt to follow any frequency changes within that vocal component. Doing the same thing with the harmonic-selection tool will also select the harmonics of the frequency that you are dragging across. Complex selections can be built up using any combination of the tools on offer.

Once a portion of audio is selected, you can start adjusting it. This could mean simply reducing or increasing its amplitude, or you can (and are encouraged to) cut or copy the selected audio to a new layer and make modifications to it there. Typically selections have ‘soft’ edges, so that any modification made to the selected audio will taper off towards the edge of the selection, which makes the results almost transparent, but the user can control how soft or hard this tapering is. 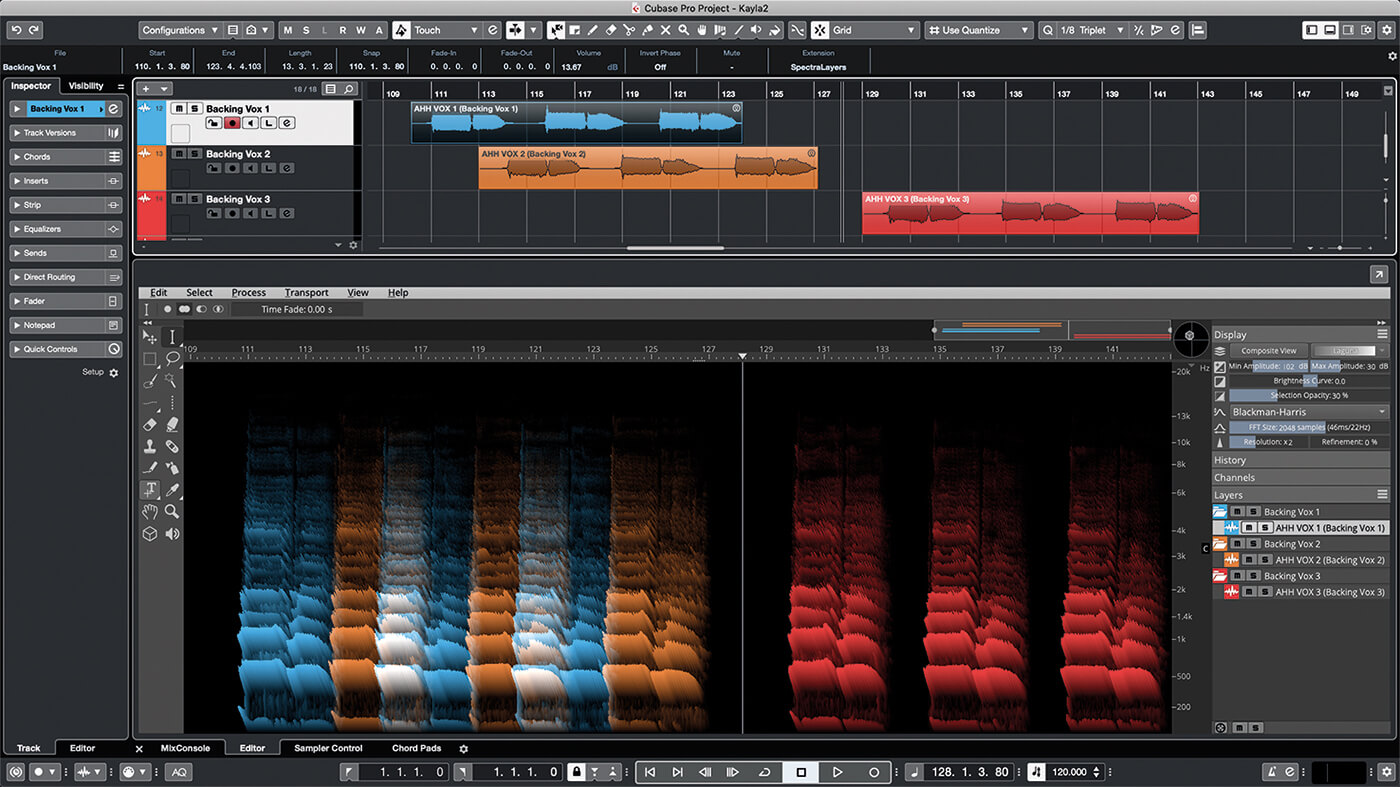 The ability to select and then remove or isolate frequency components of a sound is staggeringly effective and gives a huge range of corrective abilities such as reverb and noise reduction from live recordings, effortlessly removing pops and clicks, and so-on. On the creative front, SpectraLayers has even more to offer: You can mix components of one sound with the components of another, and by simply grabbing a brush tool and selecting a random range of frequencies you can create some astonishing sounds and waveforms that could be thrown into a sampler or looped into a track. You can even draw frequencies and noise, and have intricate control over how these elements evolve and interplay over time.

There are some issues with the plugin version, though. For example when running in a DAW, layers are mapped directly from your DAW’s tracks to the single ARA instance and new layers can only be created by assigning audio parts from the DAW to the plug-in. This is due to a limitation within the ARA2 standard and can be worked around by copying tracks and parts within your DAW, but it does make using the SpectraLayers plug-in somewhat clumsier than the standalone app. There are also some bugs in the plug-in version, but Steinberg is on top of these and will doubtless remedy them with its accustomed alacrity.

But I don’t actually mind these issues with the plug-in, because at heart and as a standalone app, SpectraLayers Pro 6 is a fantastically effective and easy-to-use tool with huge creative and corrective potential. If Steinberg lavishes this tech with the love it deserves, then I can only see it getting better.

The ability to edit audio in the frequency domain opens up many possibilities. It makes light work of removing unwanted noises, pops, clicks and such and can even deal with more fundamental problems such as hum and broadband noise. These tools can be particularly useful for fixing problems in mic recordings, especially those done in non-ideal locations, and as such they are perfect for use with audio for broadcast and film, and other post-production tasks. 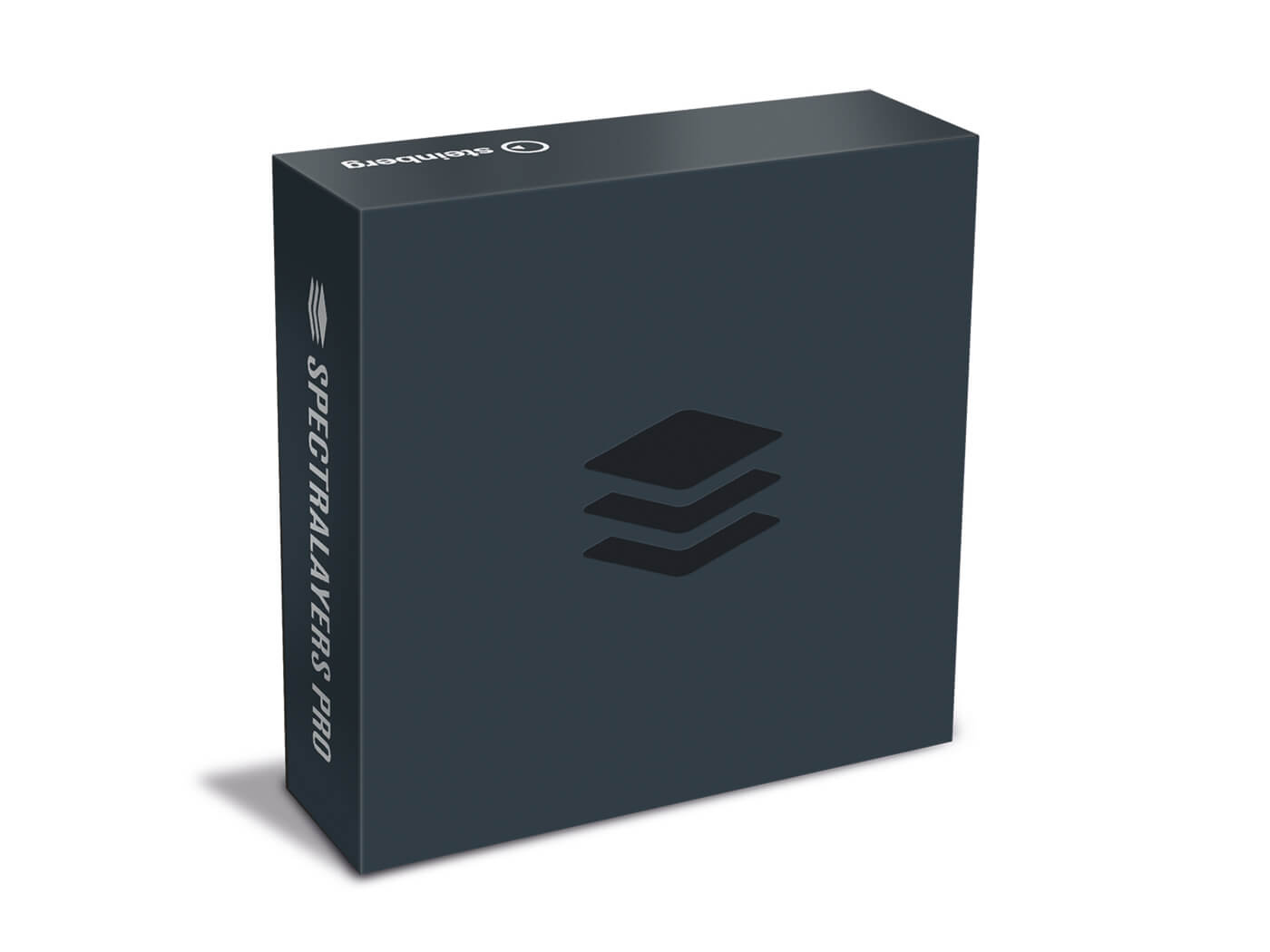 By adding layers, intelligent selection tools and drawing tools to the mix, SpectraLayers takes things up a notch in terms of the creative potential of spectral audio editing. Sound designers can use these abilities to blend aspects of different audio sources into completely new and unique sounds, or even to create entirely new sounds from scratch. 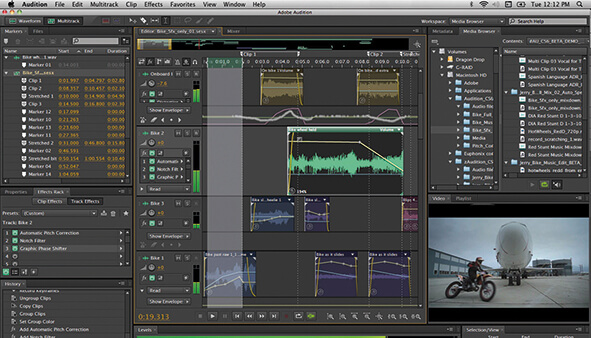 Adobe’s audio editor, which is part of and integrates with the products in its Creative Cloud offering, combines traditional amplitude-domain editing with frequency-domain spectral editing. However, it lacks the intelligent selection tools and layering found in SpectraLayers and is only available via an expensive subscription-licencing model.

iZotope’s RX 7 range has spectral editing capabilities that are on a par with SpectraLayers’, and has an added ‘Repair Assistant’ which contains modules for tackling a wide range of correction tasks. RX 7 can also overlay the conventional amplitude-domain graph over the spectral graph, which makes the FFT easier to interpret.