With the release of the final three Fusion plug-ins, Solid State Logic have completed the digitisation of their brilliant all-analogue mix bus processor. 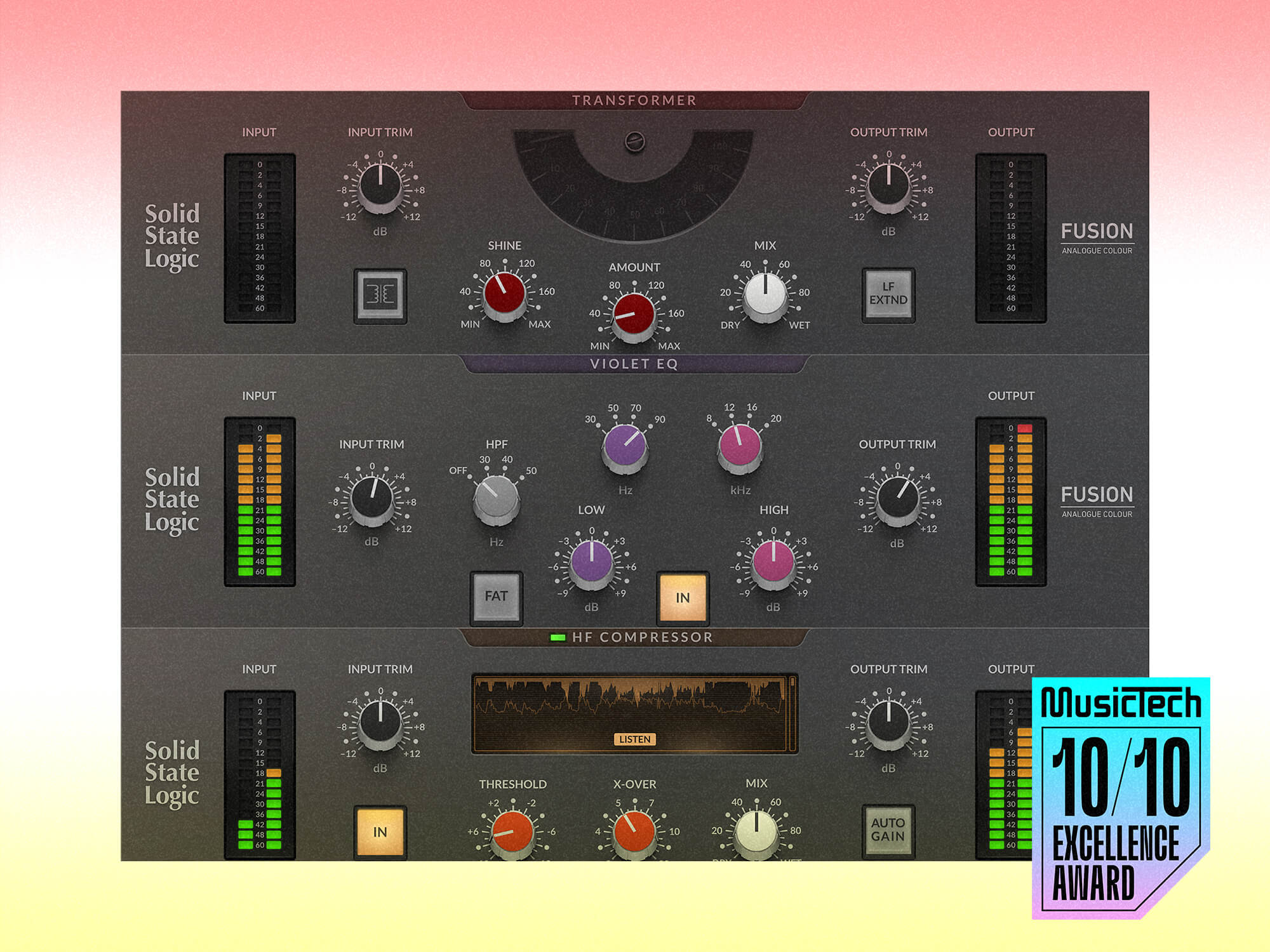 
SSL’s Fusion hardware processor has a near-magical ability to make your mix sound like it was produced in an extravagant mega-studio – not bad if you’re just working in your spare room. Fusion costs around £1,700 but has become much more accessible over the last few months, thanks to SSL creating plug-in versions of Fusion’s five analogue processors. We’ve already looked at Fusion Drive and Fusion Stereo Image, so now that the remaining Fusion plug-ins have been released, let’s see what they are, and check out how the entire suite works when used together.

Fusion Violet EQ (VEQ) is a classic mix EQ featuring a high-pass filter and two shelving EQ bands. The filter helps control deep-down grunge and boom, and you can switch its cutoff frequency between 30Hz, 40Hz and 50Hz, or disable it altogether. The filter also has a FAT feature, not found on the Fusion hardware, that adds a boost to the frequencies around the filter’s cutoff point. This compensates for any perceived loss of weight and heft that may result from the filter itself.

After this, the signal arrives at the shelving bands – the low band offers corner frequencies of 30Hz, 50Hz, 70Hz and 90Hz; the high band 8kHz, 12kHz, 16kHz and 20kHz. Both bands have up to 9dB of cut or boost available. These corner frequencies are well-chosen, focussing on the outlying ends of the audio spectrum where it is often difficult to get the desired balance. The shelving curves are also quite musical in their response, building steadily but non-linearly towards the corner frequencies. This combination makes for a fast and effective way to balance and control the lowest and highest ends of your mix (or stem – there’s no rule to say Fusion can only be used across an entire mix).

By operating in these outer-echelons of the spectrum, VEQ can highlight one of the primary challenges of managing the top-end of a mix, namely of adding clarity and energy to the top-end without making high-frequency transients unbearably intense. Fusion HF Compressor (HFC) offers a solution.

HF Compressor starts with a crossover that splits the signal using a sharp, aggressive cutoff curve. You can dial in a crossover frequency between 3kHz and 20kHz. The high-frequency portion of the signal is then sent to a compressor that features lightning-quick attack and release characteristics, before being re-mixed with the rest of the signal. The amount of compression that’s applied is controlled with a simple threshold dial.

This arrangement catches – and reduce the intensity of – any loud transients that exist within the high-frequency part of the spectrum. This smooths out the high-frequency dynamics, thereby allowing us to boost the top-end without intensifying those pesky high-frequency transients. In practice, this means you can crank up the high frequencies (ideally using VEQ), bringing out the detail, airiness and sparkle that exists up there without making the top-end of your mix sound unbalanced or overdone.

Fusion Transformer is a faithful model of the hardware’s final stage, a 600-ohm 1:1-wound under-damped transformer. The main benefit of using an under-damped transformer in an audio circuit is that it adds harmonic distortion, which we perceive as additional presence in the mid-range and extra detail, clarity and sheen in the top-end. A transformer of this variety will also cause some high-frequency phase shifting, which adds shimmer to those registers and causes a gentle roll-off in the low end, which can help to tighten things up down there and reduce any unpleasant flabbiness.

Unlike the Fusion hardware’s Transformer stage, which only has an on/off switch, the plug-in version allows us to control the strength and character of the processor, with Shine and Amount dials controlling high-frequency phase shift and harmonic distortion strength respectively. In addition, the low-frequency roll-off can be disabled if desired.

Like the other plug-ins in the suite, Transformer can add a layer of expensive-sounding polish that can be simultaneously subtle and obvious. When you enable the plug-in, you hear the gentle change in tone and character, but the change can seem ethereal and hard to pinpoint – until you disable the plug-in again, and your mix suddenly sounds dowdy and unsophisticated by comparison.

Individually, the Fusion plug-ins serve quite limited functions, despite their fantastic sound, so it’s not until you start linking them together that you begin to fully appreciate what they bring to the table. The plug-ins are hugely complementary to each other, and together they effortlessly bring out the warmth, body, presence, space and glimmer in your mixes. Without a doubt, the combo is far more powerful than the sum of its parts.

However, we do have some criticisms. The plug-in interfaces look great, but are quite big and chunky with no ability to be scaled or resized – even a UHD monitor seems crowded with all five plug-ins open at once. We also found that the plug-ins do not correctly report their processing delay to the host DAW, which won’t be a problem with some DAWs, but did cause us issues when using the plug-ins for mastering within WaveLab Pro – this should be a breeze for SSL to fix in an update.

Perpetual licences are $200 (approx. £150/€180) per plug-in, which feels like a lot for processors that, individually, have such tightly-focused use-cases. And while the stunning results of the full suite mean you won’t be disappointed, at just shy of $1,000 it’s a significant outlay for a handful of plug-ins.

If you can stomach subscription licensing, then all of SSL’s plug-ins, including Fusion, are included in the SSL Complete Bundle, which at $14.99 (approx. £11/€13) per month is both affordable and excellent value.

These gripes fade to insignificance when compared to the sonic results. Put simply, with the processors chained in the same order as they appear on the hardware, the results can be astonishing, giving your mixes the same depth, spaciousness, cohesiveness and clarity that you would expect from a $100K SSL console.